The Body Politic: Public Health and Quality of Life in the Eastern Bloc 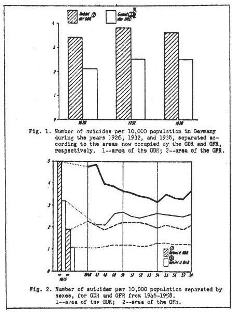 In such diverse forums as National Geographic, The Aspen Institute, and the TED-talk series, there has been an active discussion of “blue zones,” initially proposed as five distinct geographic locales where the populace demonstrates greater longevity and a higher quality of life than the norm. The concept was popularized by the author Dan Buettner, and includes areas such as Okinawa, Japan; Sardinia, Italy; and Loma Linda, California. Conspicuously absent from the list, however, is any location in the former Eastern Bloc.

In this month's highlights from Joint Publications Research Service (JPRS) Reports, 1957-1995, we're delving into some of the statistical and qualitative material which might contribute to an understanding of the absence of “red” countries from “blue” zones.

Writing from Dresden just months before construction of the Berlin Wall, the author of this report was careful not to draw specific political conclusions from his work. It's nonetheless enlightening to study the circumstances of those who chose to take their own lives on different sides of the same historical dilemma. (19 pages)

Papers of Dzerzhinskiy on the Cheka

Not far from Red Square in Moscow there's a great public space that until about 1990 was named after Felix Dzerzhinskiy. It includes a notable church, but more significantly that part of the city was home to the headquarters of the KGB, now the FSB. In Soviet times the area bore Dzerzhinskiy's name (and a 15-ton statue of the man) in recognition of his role in the Cheka, the original Soviet state security apparatus that executed many thousands of newly-minted citizens in nearby Lubyanka Prison.

In any discussion of public health and quality of life, the summary execution or imprisonment of substantial numbers of people has to be taken into account. As a precursor of later purges under Stalin and others, Dzerzhinskiy's brutal enforcement of communist orthodoxy has had a lasting negative impact. The list of “Blue Zone” criteria includes “strong social networks,” but probably of the non-revolutionary kind. (48 pages)

History of the Study of Yellow Fever in Russia

As if the “Red Terror” wasn't enough, one might also die of more natural causes, from mosquitoes. The author considers evidence from 1792 focusing on the Crimean Peninsula. The Zika virus is related to yellow fever; this report provides an interesting counterpoint to contemporary Western public health approaches to mosquito-borne pathogens. (8 pages)

Did people live longer in the past? “In tsarist Russia man's average life expectancy was only 32 years; now thanks to the raising of the workers’ living standards and the achievements of Soviet public health it reached 68 years!”

The author of this report cites some Soviet centenarians (in the Caucasian Mountains) and claims the turnaround in mortality occurred in the 1890s. He also claims that if then-current trends held, the average age of Soviet citizens would reach 104.5 years in the year 2000. (16 pages)

If one were to live to be 104.5, one might hope for more than bare subsistence. Although market-based consumption was never the explicit point of the socialist project, the citizens of communist countries nonetheless aspired to do better than their ancestors.

Considering that post-war reconstruction of Soviet industry & society went far beyond simple reinstatement of the pre-1945 standard of living, the Soviets' material accomplishment in terms of quality of life was significant quite apart from any comparison with that of the United States which enjoyed the advantage of never being formally invaded. (15 pages)

And these two statistics-based reports from East European countries for comparison with historically Russian areas:

The General Morbidity of the Population of the CSSR

The State of Health of the Population of Poland