Last month the City of Boston and Boston Police Department (BPD) corrected history and recognized the service of Horatio Julius Homer — Boston’s first African American police officer. Margaret Sullivan, the BPD archivist, and Bob Anthony, a Boston police officer, pored through records to reveal that Horatio Homer was appointed to the BPD in 1878 — not 1919 — making him Boston’s first African American police officer. Officer Homer began his police career on December 24, 1878 as a patrolman. There was a two-line reference to his appointment in the "Eastern Massachusetts" column of the December 27, 1878 issue of the Springfield Republican. JW-Homer-1-

In 1895, Homer was promoted to the rank of sergeant. 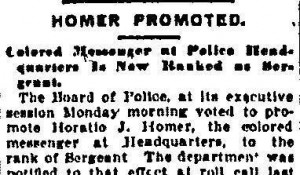 Homer is also mentioned in a 1905 article in The Appeal — an African American newspaper published in St. Paul, Minnesota — which discusses the appointment of an African American to the rank of sergeant on the Chicago police force, adding that Chicago "…is not entitled to the distinction claimed for it, of being the first to place an Afro-American officer in a commanding position." 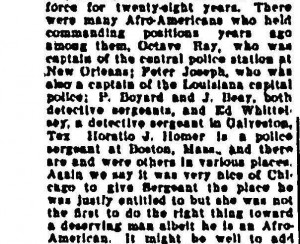 Sergeant Homer retired from the BPD in 1919 at the age of 71 and passed away on January 12, 1923. At a special ceremony on Saturday, June 26, 2010, the City of Boston unveiled a new gravestone, replacing the unmarked grave of Homer and his wife, Lydia, in Evergreen Cemetery, located in the Brighton section.