Boundary Issues: Iowa Territory and Missouri Deploy their Militias against Each Other during the Honey War

Spoiler alert: it wasn’t about the honey. Rather, this 1839 border dispute between Iowa Territory and Missouri involved conflicting survey lines that left the boundary there at best ambiguous, at worst contentious. According to the apocryphal story, in lieu of collecting taxes a frustrated Missouri official chopped down a valuable stand of trees inhabited by industrious bees, on land owned by a person who had reason to believe that he (and the bees) lived in Iowa Territory. No blood was shed, but militias were mobilized, property seized, and a sheriff jailed.

The map above shows four survey lines varying by almost ten miles at their greatest extent. There was the Sullivan Line (Line 1), run in 1816 by John C. Sullivan to delineate an Indian treaty, but effaced by time and later found to be inaccurate. Then there was the Brown Line, established by John C. Brown in 1836 at the behest of the governor of Missouri; this was the northernmost line (Line 4). Then there was the survey by Albert Miller Lea (Line 3), on behalf of Iowa Territory and the federal government, which put the border south of Missouri’s claim. The fourth line was the one Sullivan should have drawn if he had taken magnetic declination into account in his survey (Line 2). 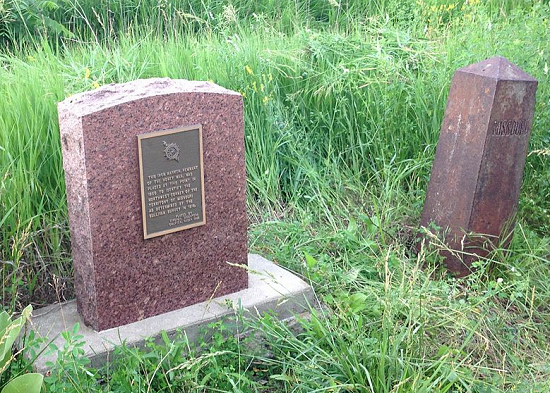 Part of the trouble involved the imprecise designation of the rapids along the eastern border; were they on the Des Moines River, or were they the Des Moines Rapids on the Mississippi River, which were twelve miles long? What seemed like an insignificant detail during the original survey compounded dramatically over the 200-mile length of the border. As the land became more settled, competing state/territorial officials became more invested in harvesting the taxes to the credit of their own jurisdiction.

By 1839 the dominoes (and the trees) began falling. The citizens of Van Buren County, Iowa Territory, petitioned their governor Robert Lucas thus:

The unwarrantable conduct of Missouri toward the southern portion of Iowa, call loudly for the interposition of your Excellency, the authorities have, against the will, and wishes of the People, assessed their property, and endeavored to ascertain, their views in relation to slavery, and further, ordered that they should not pay the Collector of this County whose duty requires that it should soon be accomplished. 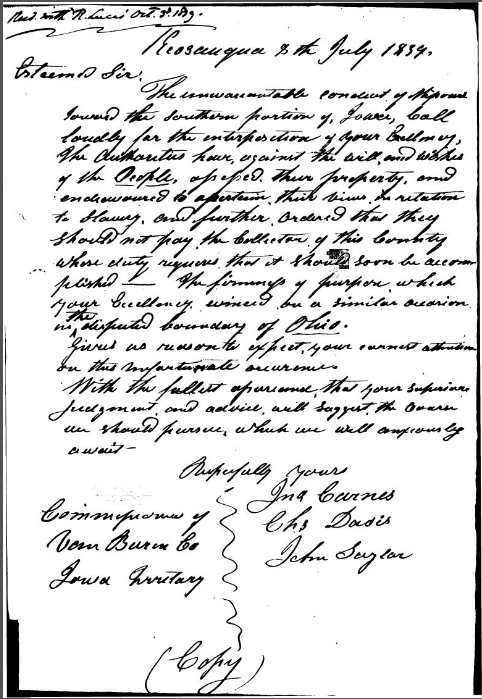 Governor Lucas responded with the first of several proclamations: 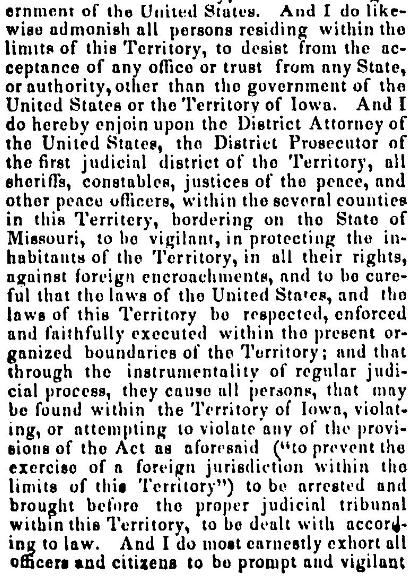 But what were those “present organized boundaries?” Experts differed. In less than a month’s time, Missouri Gov. Lilburn W. Boggs issued his own proclamation:

And I do moreover expressly direct all officers, civil and military of this State, while they are required to execute fully their official duties within the aforesaid limits, over which the said Territory of Iowa claims to be entitled to extend its authority, by virtue of a pretended right, and the exercises of an unlawful jurisdiction, so to conduct themselves as to create no unnecessary excitement, and to use their utmost efforts, consistent with the requisitions of the laws of this State, to suppress any needless collision, and to maintain an amicable feeling with the citizens of this State, and of the United States residing within the Territory of Iowa, and in every respect in the discharge of their official functions, to conform strictly and literally to the laws of this State. 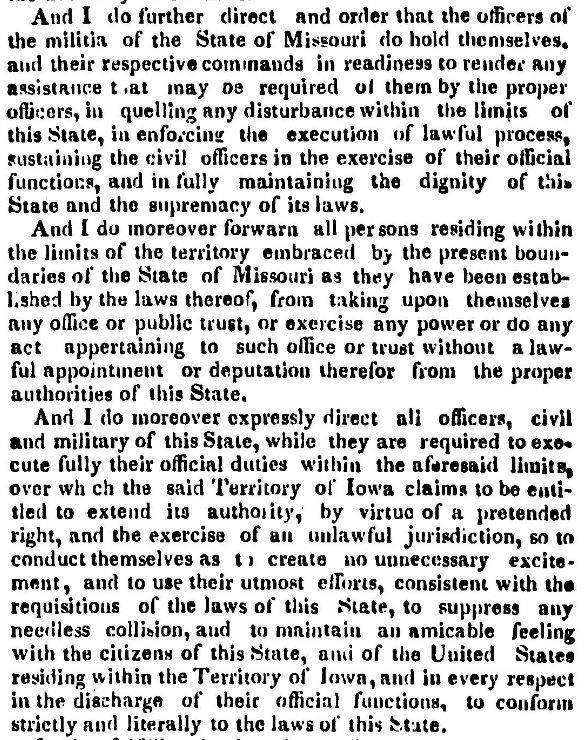 So Missouri’s “foreign encroachments” were set against Iowa’s “pretended right.” Lucas doubled-down with yet another proclamation:

I therefore exhort the citizens of United States residing in Van Buren county—those in particular over whom the authorities of Missouri are seeking to exercise an unwarrantable and unjustifiable jurisdiction—to be calm and discreet in all your acts. Look up to the civil authorities of the United States for protection. Should you even be threatened with extermination by the all powerful arms of Missouri, be not dismayed. You are neither slaves that you should pay tribute to a foreign government, nor passive members of a defenceless community, that you should be taxed without your consent. You occupy the exalted station of free and independent citizens of the United States. 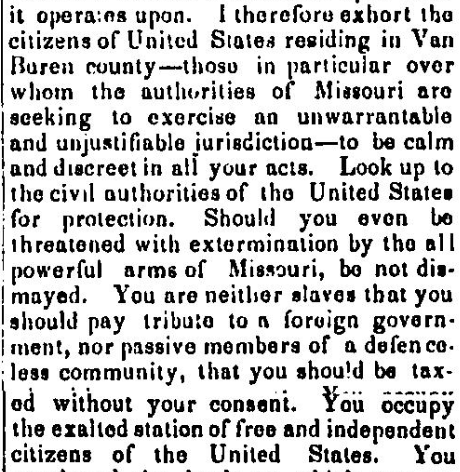 Lucas’s words echo the petition given above, and foreshadow the intervention by federal authorities in his appeal to U.S. Secretary of State John Forsyth in December 1839:

Where the controversy will end, it is impossible to foresee. Report says, that Missouri is embodying a military force to take possession of the district of country claimed by her. The Marshal of the U.S. has made requisition on the respective Major Generals of the Territory for forces to enable him to enforce the laws of the United States, and to repel an invasion of our Territory by an armed force from Missouri. The air of superiority assumed by the authorities of the State of Missouri, and the manner of a few restless characters near the line, have created an excitement of feeling in the hearts of our citizens, which if intruded upon much further, may burst out beyond the restraint of civil authority. Should the authorities of Missouri invade our Territory with an armed force, and re-commence their depredations, I am apprehensive that blood will be shed; and if blood begins to flow it is impossible to foretell where the matter will end. 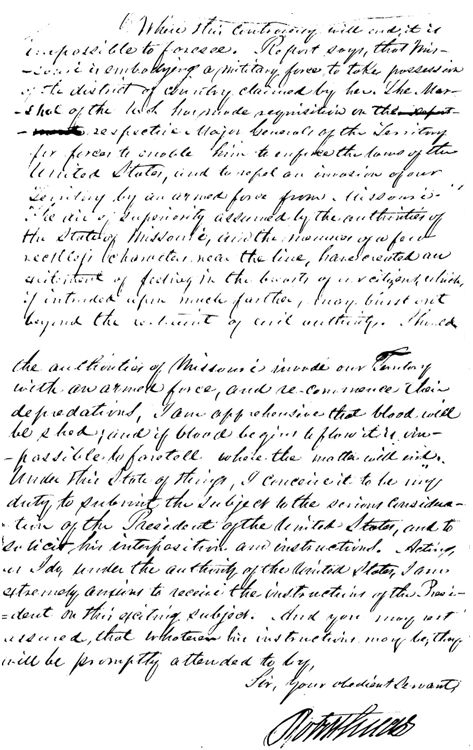 On Monday the 14th inst. the sheriff of Clark County Missouri made his appearance in the County of Van Buren to collect taxes, accompanied with two or three men. Within the County of Van Buren he called on three or four of our citizens for their tax, and I have reason to believe that one or two called on of the individuals called on last refused to pay--upon which the sheriff said that he should sell their property to the amount of their tax--and further I [am] credibly informed that one or two of those individuals last called on made some threats to the said sheriff in case he molested their property. Also, it is further reported that the sheriff returned to Waterloo and reported to the commanding officer since which time officers have been collecting in Waterloo making arrangements to march their force of several hundred men armed men on Monday next for the purpose of taking property or money of our citizens for taxes. 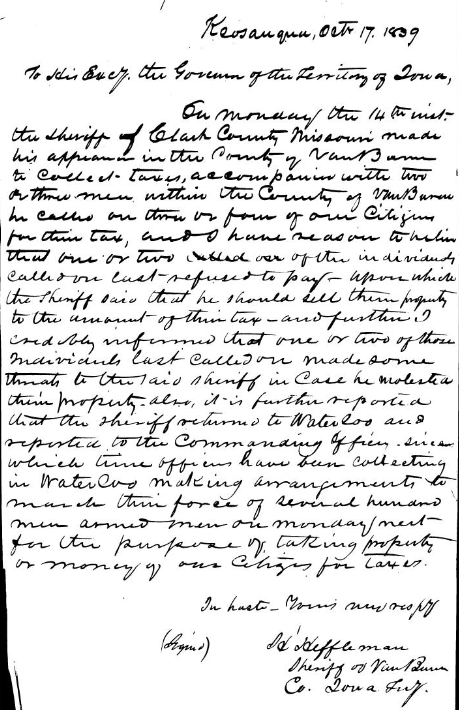 The situation did not initially develop so quickly or on such a large scale as anticipated, but in due course Clark County Sheriff Uriah S. Gregory did embark upon a second attempt to render unto Missouri what perhaps belonged to Iowa, whereupon he was himself arrested by Sheriff Heffleman on November 20:

The Sheriff of Clark County, Missouri made his second appearance in the County of Van Buren, for the purpose of collecting taxes on the 19th inst. I was informed of his arrival. I pursued him forthwith, and arrested him on the 20th. The court of inquiry was held on the 21st. He was found guilty, and refused to give bail for his appearance at the next District Court, and he still remains in my custody under guard, as we are destitute of a jail. I am at a loss to know what to do with him for safekeeping, as one of the attorneys of this county informed me it was not in my power to take him out of this county. The public rumor is that they intend to take him out of my custody. I now appeal to you for instructions what to do with him, and your commands shall be obeyed, if possible. 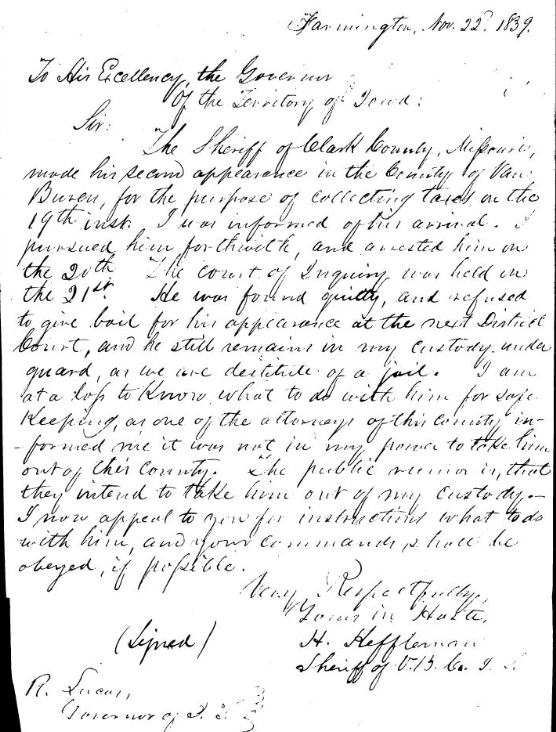 Missouri responded to this act with an armed force which interrupted cross-border trade and seized the mails. And more pointedly, Missouri began seizing the personal property of those unfortunates residing in the contested area:

A communication from you to His Excellency Governor Lucas, of the 4th inst. is now before me, representing that an armed force from the State of Missouri, under the command of a Genl. officer of the militia of that state, had, on the 3rd inst. invaded the southern part of the County of Van Buren--one of the organized counties of this Territory and embraced within its established limits, and within the jurisdiction of the United States--and had forcibly seized and carried away property belonging to sundry citizens of the United States, residing within said Territory, which property was seized under a pretence that the same was taken to satisfy certain demands for taxes due from such citizens to the Government of Missouri. 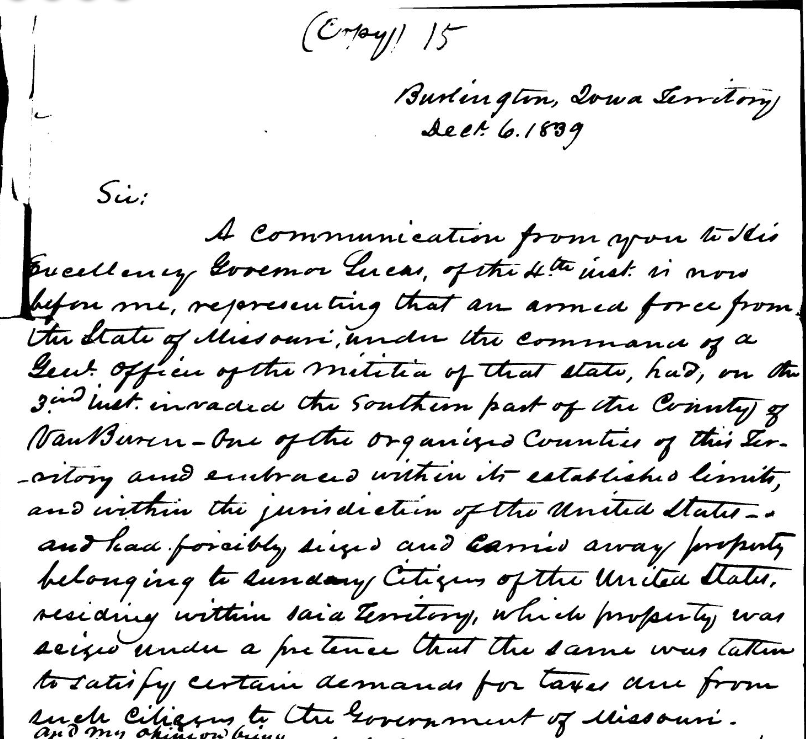 Iowans promptly mustered their own forces against the Missourians.

We are also able to state that on the authority of Mr. Whicher, that the whole military force of the Territory of Iowa has been required by the Marshal to keep the peace on our Southern Border, and that orders to this effect have been issued to Gen’ls Lewis, Fletcher and Browne.

I learned from some subordinate military officers that three citizens of Iowa Territory had lately been arrested and tried as spies--found not guilty, but were sentenced to pay the cost:--that the stopping of the United States Mail while on its way to the Territory and the practice of searching wagons for goods contraband of war had been abandoned--that indeed but few instances of search and seizure had occurred and that the mail had only been stopped one week. 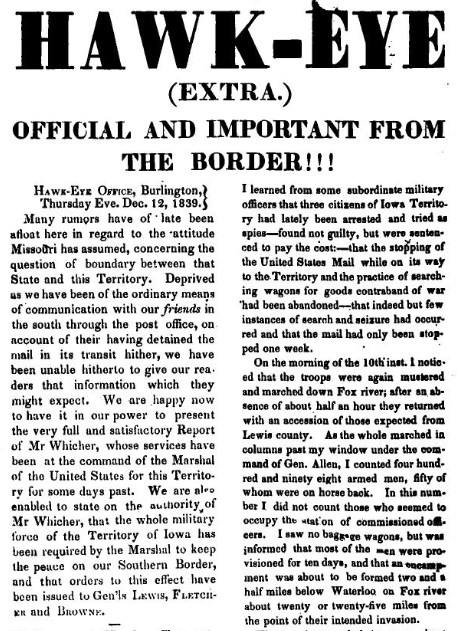 Thankfully, just a few days after the article above, cooler heads prevailed. Iowa Deputy Marshal G.A. Hendry dispatched officers to Waterloo, Missouri, to negotiate the peace. Upon arrival at that place they discovered that Missouri had already disbanded its troops, and had ceased to enforce its demands for taxes:

I yesterday morning requested of General J.B. Brown to dispatch an embassy to Waterloo, the seat of apporations [sic] in Missouri--and in pursuance thereof, Genl. A.C. Dodge Maj. J.A. Clarke and James Churchman were ordered to proceed forthwith to that point. They left as required and today returned with the intelligence that before their arrival the troops of Missouri had been dismissed in obedience to an order of the County Court of Clark County--and an assurance was given them that all hostilities on the part of Missouri had been suspended--and that no effort would hereafter be made to enforce jurisdiction upon or over that portion of Van Buren County forming the disputed territory until a decision of the general government can be had.

I have therefore notified each of the Maj. Genls. that all further requisition for the assistance of the Militia force on my part is at an end--unless some new event may compell [sic] me to require such aid. 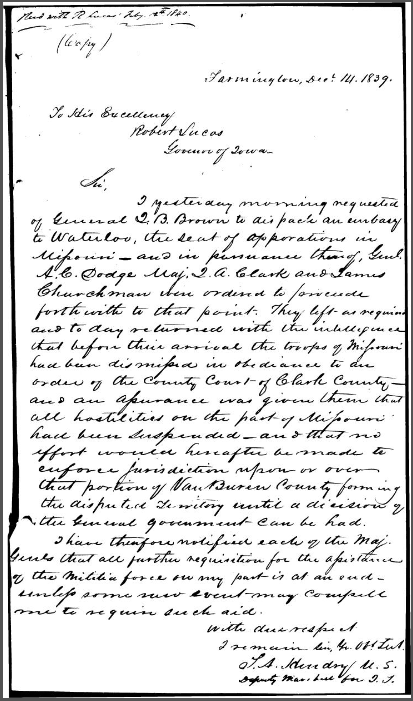 The boundary would be surveyed several more times until it was finalized by the U.S. Supreme Court in 1850, which accepted Sullivan’s original line. Minor disputes would continue to arise however. In 2005 a team of surveyors and cartographers finally settled the matter using Global Positioning System (GPS) technology and site excavations to locate and mark many of the 19th-century monuments. 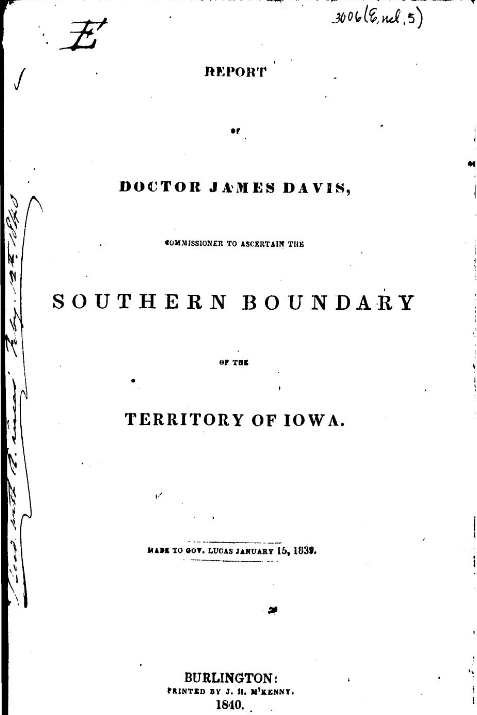 For more information about making Territorial Papers of the United States available at your institution, please contact Readex Marketing.