Bridges to the Past: Everything from the Cold War Is New Again 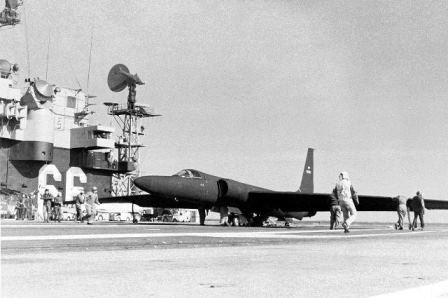 Several weeks ago a Dutch investigation determined that a civilian airliner flying over contested Ukraine territory was brought down by a missile of Russian manufacture; Presidents Obama and Putin continue to spar over "deconfliction" in Syrian airspace. And Steven Spielberg's latest film, "Bridge of Spies," based upon the Soviets' downing of an American U-2 reconnaissance aircraft in May 1960, was released internationally. Is this art imitating life? Or it could be more as William Faulkner wrote, "The past is never dead. It's not even past."

In this month's highlights from Joint Publications Research Service (JPRS) Reports, 1957-1995, we're going back to the future: Political prisoners. Electronic countermeasures. Confrontations on the German Autobahn. Let the credits roll: the Cold War's about to get hot. Again.

US-USSR Incident on the Berlin Autobahn

If your commute was challenging this morning, at least you didn't have armored personnel carriers and spiked vehicle barriers blocking the roadway. In October 1963 an American military convoy traveling through East Berlin to West Germany encountered all that and more. Protests were filed. Ultimatums issued. There was talk of "misunderstandings" and "compromise," but also of "provocation" and "heavy undesirable consequences."

In the Penitentiaries of East Germany

The American convoy cited above eventually made it out to the West, but the political prisoners in East Germany faced a much longer stay—if they survived to see freedom at all. Walter Osten writes, "...the spirit which reigns in these institutions has hardly changed from the Nazi period."

The Cold Route to Power: Notes on Castro's Cuba

In this century Fidel Castro recently had an audience with Pope Francis, and the United States is reestablishing diplomatic and commercial relations with Cuba. About fifty years ago, the Cuban socialist revolution was still very much a work in progress. The author writes, "If one wishes to retrace once more the political course followed by Cuba since Fidel Castro came to power it is necessary to review the history of the Cold War." Our perspective is broader today than it was at the time of this report. But as with many things in the rear-view mirror, objects are closer than they appear.

One example of things being closer than they appeared was nuclear annihilation in the form of Soviet missiles deployed on Cuban soil. The writer explains President Kennedy's strategy thus: "One must give Communism just enough elbow room to change inside, to become liberalized in a climate of peace." And this actually seems to have come to pass, although to judge from recent events the resolution of the Cold War may be a bit premature.

Nuclear Weapons Are Not To Be Trifled With

Here a Soviet colonel excoriates the Chinese for desiring their own nuclear deterrent, claiming that this makes no sense in light of a recent treaty with America, and especially since Chinese security is "...guaranteed by the entire power of the socialist camp." "War is alien to communism by nature," the writer claims.

Radio Intercept at Sea and Countermeasures against It

The Role of Science in Solving the Problems of Naval Warfare

However inimical warfare may be to communism, the communists themselves spent a great deal of time and resources preparing for it—as did the United States. The first report of this pair cites the U-2 incident and National Security Agency staffers in claiming that the United States had over 2000 radio intercept positions; the second posits science as bridging the gap between traditional military strategy and new approaches to naval warfare made possible by technology. Kennedy's gambit of a naval blockade of Cuba seems to have proven the author's thesis in a contrarian way. But if the Soviet Navy had met the American blockade with the author's submarines rather than de-escalation, we might today be sitting in the darkness considering the vagaries of history in surroundings less hospitable than those of a movie theater.