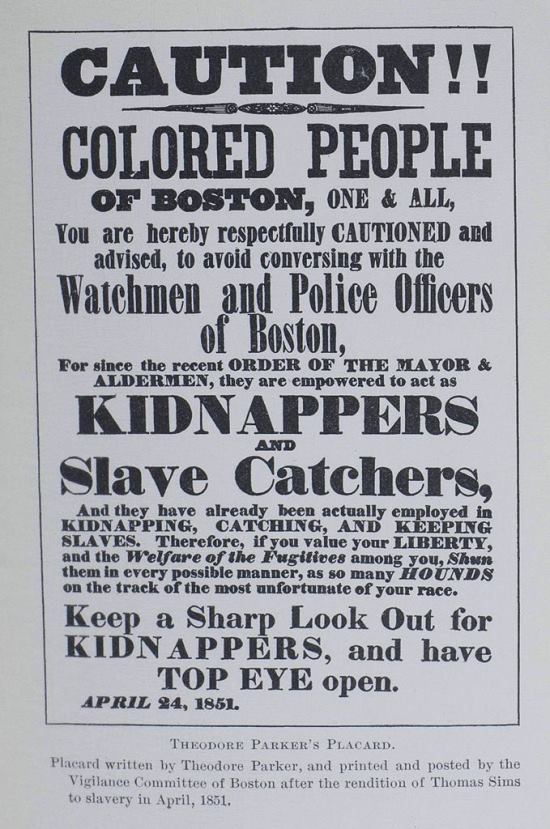 The April release of Afro-Americana Imprints, 1535-1922: From the Library Company of Philadelphia includes several histories of the American colonies and the United States from both sides of the Atlantic. All offer important insight into the African American experience, including slavery. 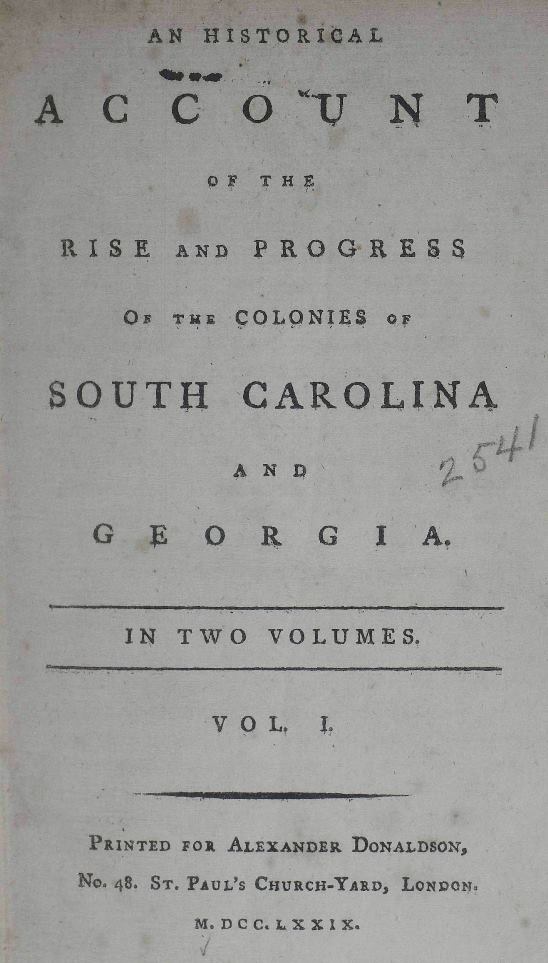 Alexander Hewatt (1739-1824) is recognized as the first historian of South Carolina and Georgia. He was born in Roxburgh, Scotland, and emigrated to South Carolina in 1763. Hewatt remained loyal to the Crown during the American Revolution and was expelled from the U.S. in 1777.  Introducing this two-volume work, Hewatt states his motivation arose “from an anxious desire of contributing towards a more complete and general acquaintance with the real state of our colonies in America.”

With the introduction of rice planting into this country, and the fixing upon it as its staple commodity, the necessity of employing Africans for the purpose of cultivation was doubled. So laborious is the task of raising, beating, and clearing this article, that though it had been possible to obtain European servants in numbers sufficient for attacking the thick forest and clearing grounds for the purpose, thousands and ten thousands must have perished in the arduous attempt. The utter inaptitude of Europeans for the labour requisite in such a climate and soil, is obvious to every one possessed of the smallest degree of knowledge respecting the country; white servants would have exhausted their strength in clearing a spot of land for digging their own graves, and every rice plantation would have served no other purpose than a burying ground to its European cultivators. The low lands of Carolina, which are unquestionably the richest grounds in the country, must have long remained a wilderness, had not Africans, whose natural constitutions were suited to the clime and work, been employed in cultivating this useful article of food and commerce.

Hewatt, however, opposes strongly the enslavement of Africans.

So much may be said for the necessity of employing Africans in the cultivation of rice; but great is the difference between employing negroes in clearing and improving those rich plains, and that miserable state of hardship and slavery to which they are there devoted, and which has been tolerated and established by the law of the land. If we view this race, first ranging over the hills of Africa, equally free and independent as other rude nations on earth, and from thence inveighed by fraud, or compelled by force, and then consigned over to a state of endless slavery, we must confess the change is great and deplorable, especially to an impartial and disinterested eye. Without them, it is acknowledged, slow must have been the progress of cultivation in Carolina; but, from such a consideration, what man will presume to vindicate the policy of keeping those rational creatures in perpetual exile and slavery. Nature had given them an equal right to liberty as to life, and the general law of self-preservation was equally concerned for the preservation of both. We would be glad then to know, upon what principle of equity and justice the English traders found their right to deprive the freeborn inhabitants of Africa of their natural liberty and native country; or on what grounds the planter afterwards founds his right to their service during life, and that of all their posterity, to the latest generation. 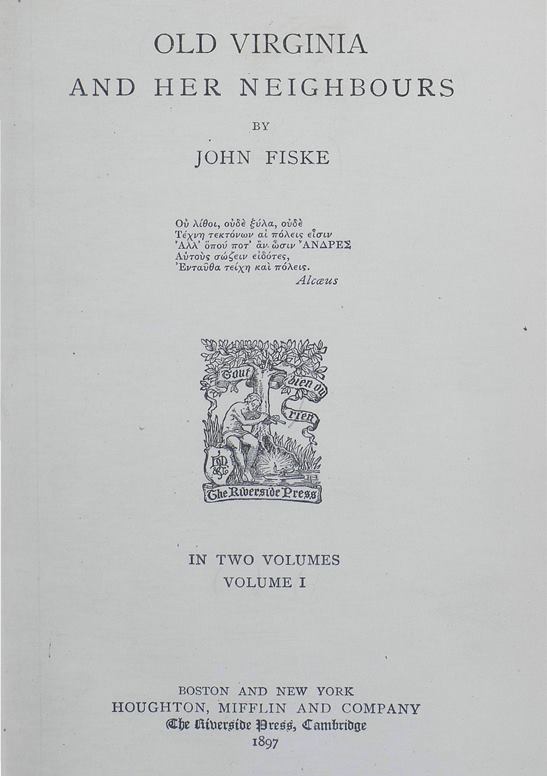 Old Virginia and Her Neighbours (1897)

John Fiske (1842-1901) was an American philosopher, historian, author and lecturer. In this two-volume history of early Virginia, he writes about the colony’s workforce in 1624, offering this grim appraisal:

Of negroes scarcely any are to be seen, only twenty-two all told, in this population of perhaps 4,000 souls. Cheap labor is supplied by white servants, bound to their masters by indentures for some such term as six or seven years; they are to some extent a shiftless and degraded set of creatures gathered from the slums and jails of English seaport towns, but many of them are of a better sort.

When Fiske, a committed abolitionist, turns his attention to slavery, he quotes the nation’s third president.

…we find Thomas Jefferson—himself the kindest of masters, and familiar with slavery in its mild Virginia form—thus writing about it: “The whole commerce between master and slave is a perpetual exercise of the most boisterous passions, the most unremitting despotism on the one part, and degrading submissions on the other. Our children see this, and learn to imitate it….The man must be a prodigy who can retain his manners and morals undepraved by such circumstances….With the morals of the people their industry also is destroyed. For in a warm climate no man will labor for himself who can make another labor for him.” 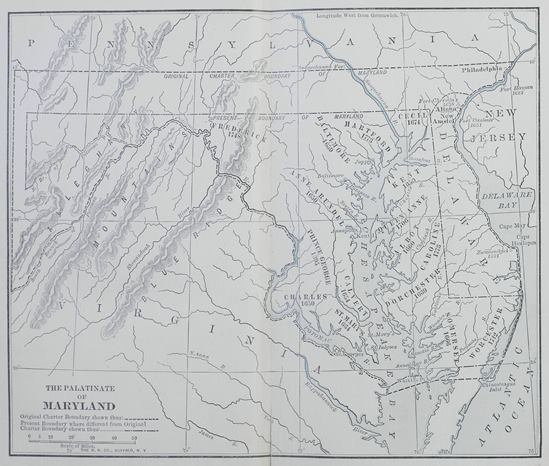 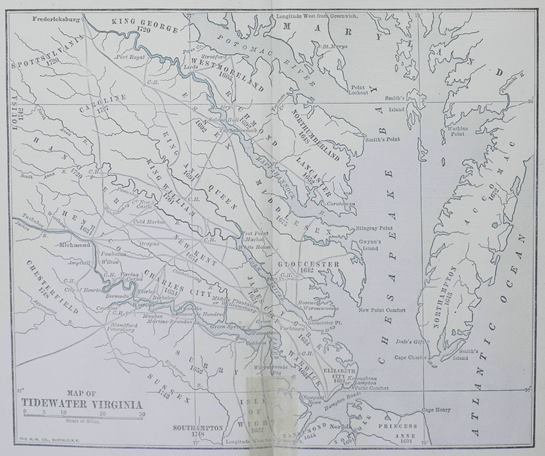 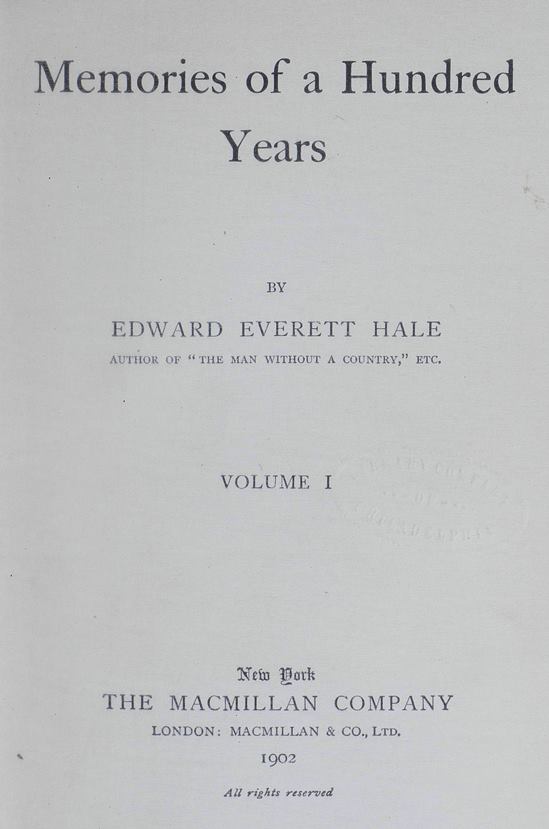 Edward Everett Hale (1822-1909) was an American author, historian and minister. A child prodigy, Hale graduated from Boston Latin School at age 13 and second in his class from Harvard College four years later. In this two-volume history of the U.S. he writes about an uncomfortable acceptance of slavery prior to and during the American colonial period.

Hale continues, offering another example from 100 years after Hawkins life:

The charter of the Province by King William III of the date of 1690 is very strong. It gives to all residents in the province “the liberties of natural-born subjects.” But, in the face of this, slavery worked its way in.

Hale goes on to illustrate the waning discomfort many had toward the trade in human beings as slavery became further imbedded in popular culture.

But, at the same time, here is Daniel De Foe in 1719 creating Robinson Crusoe, one of the most remarkable characters in fiction, perhaps the most remarkable. De Foe is distinctly and definitely a religious man….Robinson Crusoe is distinctly a religious man. Now, a religious writer like De Foe, creating a religious hero like Robinson, makes of him a Brazilian slave-trader who is shipwrecked in a slave-ship which he had himself fitted out to bring a cargo of slaves from Africa to Brazil. This hero becomes the most popular hero in English romance for a century, perhaps I might say two. Yet, in all the literary criticism of the book for a century, I think no one has found one word among the moralists of England which finds the least fault with Robinson on account of his active participation in the slave-trade. It seems to me that this absolute silence on such a point shows the utter indifference of the public mind of England in the matter.