This year marks the 200th anniversary of Charles Dickens’ birth. America’s Historical Newspapers contains hundreds of contemporaneous articles about this genius of English literature, as well as reviews of his works and advertisements for his books. Here are a few samples, supplemented by the menu of a banquet held in his honor, found in American Broadsides and Ephemera. 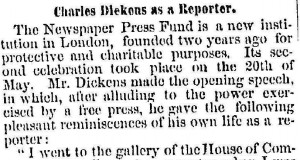 In this speech before the Newspaper Press Fund, Dickens recalls his days as a Parliamentary reporter:

“I went to the gallery of the House of Commons as a parliamentary reporter when I was a boy not eighteen, and I left it—I can hardly believe the inexorable truth—nigh thirty years ago....I have worn my knees by writing on them on the old back row of the old House of Commons; and I have worn my feet by standing to write in a preposterous pen in the House of Lords, where we used to be huddled like so many sheep (laughter), kept in waiting till the wool-sack might want restuffing." 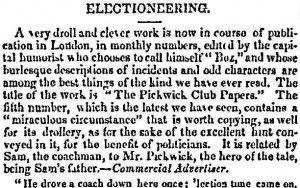 After the publication of The Pickwick Papers, he was world famous. These comments introduced an excerpt reprinted in this country:

A very droll and clever work is now in course of publication in London, in monthly numbers, edited by the capital humorist who calls himself “Boz,” and whose burlesque descriptions of incidents and odd characters are among the best things of the kind we have ever read. 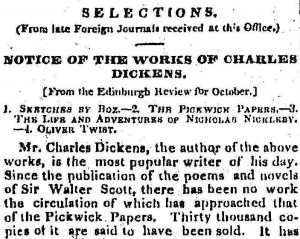 The Edinburgh Review ran an appreciation of his work after his first four novels were published. It was reprinted in Philadelphia.

Mr. Charles Dickens, the author of the above works, is the most popular writer of his day. Since the publication of the poems and novels of Sir Walter Scott, there has been no work the circulation of which has approached that of the Pickwick Papers. Thirty thousand copies of it are said to have been sold….Great popularity is doubtless to be accepted as presumptive evidence of merit—and should at least induce us to regard with attention the qualities of one who can exhibit so many suffrages in his favour. 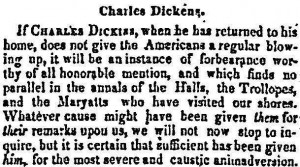 Dickens came to the United States in 1842. Here’s a critique of the way Americans treated him:

It is really humiliating, to witness the fawning, the sycophancy, the gross adulation, and the toadeyism, to which his arrival amongst us has given birth, and which must be as nauseous and unpalatable to him, as it is unworthy of us….Some, who are not obnoxious to the charge of sycophancy, have, nevertheless, seemed to consider him as some strange animal, some nondescript, some monstrosity, some raree show, to be stared at, commented upon and criticised.

In cities that he visited, great banquets were held in his honor. This menu from one such banquet shows the amazing number of dishes offered to the assembled multitudes.

From American Broadsides and Ephemera 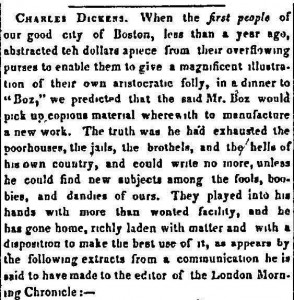 His views of Americans, largely unflattering, are contained in two works: Martin Chuzzlewit and American Notes for General Circulation. His feelings were prefigured in a letter he reportedly sent in 1842 to the editor of the London Morning Chronicle and reprinted in the Boston Courier:

Though in my travels from city to city, I saw of course much to be pleased with and astonished at—yet the total difference between our good old English customs and the awkwardness, the uncouth manners, and the unmitigated selfishness which meet you everywhere in America, made my journey one of a good deal of annoyance. I do not think the Americans, as a people, have much good taste....In the larger cities, the grand aim of the people seems to be money-making. Every good desire, every refined wish, every aspiration for the lofty, and the pure; and the holy is swallowed up in the great whirlwind of avarice. Before crossing the Atlantic, I had heard much of the thriftiness of our American offspring; but I must confess I was not prepared to see so much meanness. 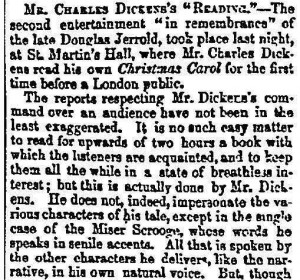 Dickens was known in his day for his public readings. This article describes the first such reading of his classic work, A Christmas Carol:

The reports respecting Mr. Dickens’s command over an audience have not been in the least exaggerated. It is no such easy matter to read for upwards of two hours a book with which the listeners are acquainted, and to keep them all the while in a state of breathless interest; but this is actually done by Mr. Dickens. He does not, indeed, impersonate the various characters of his tale, except in the single case of the Miser Scrooge, whose words he speaks in senile accents. All that is spoken by the other characters he delivers, like the narrative, in his own natural voice.…his command is equally potent over emotions of every kind; and during the whole of last evening, he held the sympathies of his hearers as firmly as one might grasp a tangible object. The very aspect of that crowd, composed of the most various classes, hanging on the utterance of one man, was in itself an imposing spectacle. 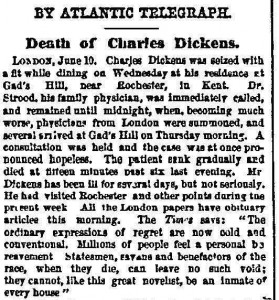 Dickens died, relatively young, in 1870. Papers in this country carried the news from London, as well as quoting the obituaries in the London papers.

All the London papers have obituary articles this morning. The Times says: “The ordinary expressions of regret are now cold and conventional. Millions of people feel a personal bereavement. Statesmen...and benefactors of the race, when they die, can leave no such void; they cannot, like this great novelist, be an inmate of every house.” The Daily News says: “Without an intellectual pedigree, his writings form an era in English literature. He was generous, loving and universally beloved. He leaves, like Thackeray, an unfinished story.”  The Morning Post says: “Charles Dickens did more than any contemporary to make English literature loved and admired.” 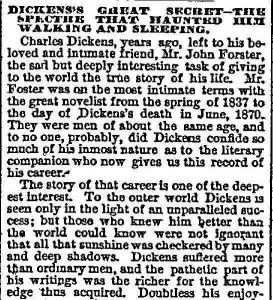 After his death, a secret was revealed that every student who reads David Copperfield is taught – that Dickens could so accurately render the labors of the blacking factory because he had worked in one himself while his father was in debtor’s prison. These facts were revealed after his death in a biography written by his friend John Forster:

The incidents to be told now would probably never have been known to me, or the occurrences of his childhood and youth, but for the accident of a question I put to him one day in March or April of 1847….It was not however then, but some weeks after, that Dickens made further allusion to my thus having struck unconsciously upon a time of which he never could lose the remembrance while he remembered anything, and the recollection of which, at intervals, haunted him and made him miserable, even to that hour…. Dickens said of this period of his life: “The deep remembrance of the sense I had of being utterly neglected and hopeless; of the shame I felt in my position; of the misery it was to my young heart to believe that, day by day, what I had learned, and thought, and delighted in, and raised my fancy and my emulation up by, was passing away from me, never to be brought back any more; cannot be written. My whole nature was so penetrated with the grief and humiliation of such considerations that even now, famous and caressed and happy, I often forget in my dreams that I have a dear wife and children; even that I am a man; and wander desolately back to that time of my life.”

American newspapers celebrated his centenary in 1912:

All the English speaking world as well as other nations which know Dickens through translations and love for him for his humanity will join in the tribute to his memory. Never before has so widespread an interest been manifested in the observance of the centennial of a writer. This is proportioned properly to the extent of the fame of Dickens and to the esteem in which his myriad readers hold him. No other author has so personal a following. To the men and women who read Dickens he is not merely a man who has afforded interest and amusement. He is the man who has created for each individual reader friends and enemies who are not only characters in books and actors in stories but living personalities, to be recognized in the men and women with whom one comes into daily contact or whom one passes on the street.” 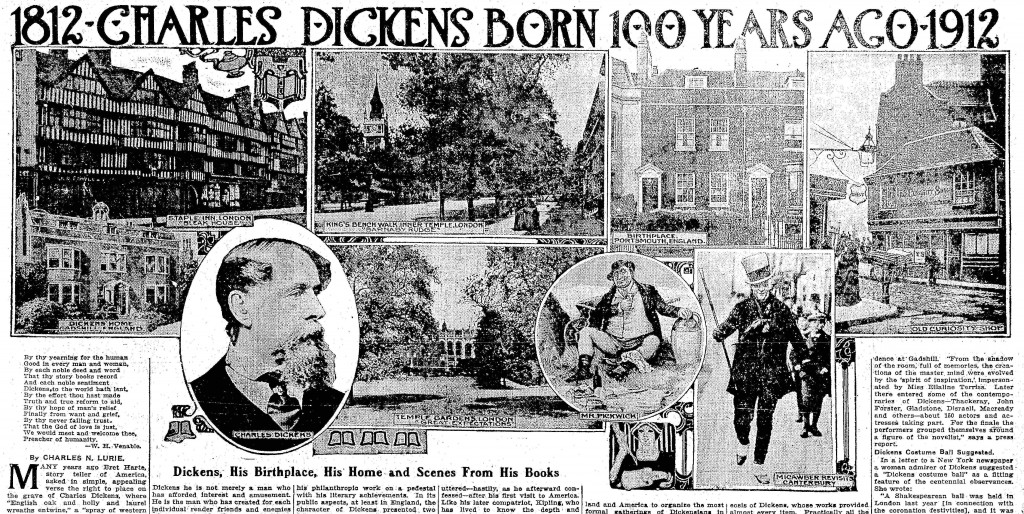 Dickens is not the only European author who can be traced through the pages of America’s Historical Newspapers. Alexandre Dumas was a fixture in the press during his day. Only one of Dumas’ works, The Three Musketeers, seems to retain its enduring popularity, while many, if not all, of Dickens’ works do. There’s little doubt that the 300th anniversary of his birth will be widely celebrated.    For more information about using America's Historical Newspapers to research centuries of literary history, please contact readexmarketing@readex.com.