Our guest blogger today is Bruce D. Roberts, author of Clipper Ship Sailing Cards (2007) and Mechanical Bank Trade Cards (2008). His new article on "The Development of the American Advertising Card" appears in the April 2011 issue of The Readex Report.

In the mid-nineteenth century, clipper ships sailed from New York and Boston to San Francisco. Shipping lines advertised voyages of clipper ships via sailing cards, most of which were issued between 1856 and 1868. The American Civil War fell right in the middle of this span, and Civil War imagery is seen on many cards. The examples below are found in American Broadsides and Ephemera, Series I, a Readex digital archive created in partnership with the American Antiquarian Society.

Star-spangled banners and boughs of oak (strength) and laurel (victory) frame a Union general—bearing an idealized likeness to Ulysses S. Grant—on this Invincible card. Grant became widely known in the United States after his victory at Chattanooga in late 1863.

Rattler Pro-Union imagery fills an 1864 Rattler card: Union soldiers, the American flag, and a huge gun emplacement that the Rebels couldn’t possibly touch. All is patriotic, including the African American (presumed freed) loading cannon balls. Although turned away by the Union army at the start of the war, 200,000 blacks ultimately served in some capacity. Still, this is the only known clipper card design to include an African American.

Volunteer This Volunteer card contains the ultimate in Civil War battle imagery. An armed standard bearer leads massed Union troops forward as a Confederate soldier falls. Rifles with fixed bayonets frame the image, as well as the flag-backed panel with the sailing information. 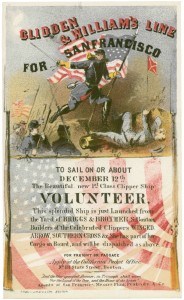 About the Author Bruce D. Roberts has studied, collected, and written extensively about nineteenth-century advertising cards for more than three decades. His articles on "The Development of the American Advertising Card" and "Images of American Historical Figures on 19th-Century Clipper Ship Cards" appeared in The Readex Report. He has published Clipper Ship Sailing Cards (Lulu.com, 2007) and Mechanical Bank Trade Card (Lulu.com, 2008). Up next: a book on Ford’s late, unlamented car, the Edsel.