Controversial Literature in The American Slavery Collection, 1820-1922: From the American Antiquarian Society

The September release of The American Slavery Collection, 1820-1922, contains many documents categorized as “controversial literature.” This bibliographical term describes works that argue against or express opposition to individual religious and monastic orders, individual religions, individual Christian denominations, and sacred works. Unsurprisingly, much of the controversy in the following documents surrounds Biblical interpretations of the institution of slavery.

A Treatise on Resistance and Non-resistance: in Which Is Included a Scriptural Distinction between the Church of Christ and the Civil Government of the World (1848)
By Royal Gage, minister of the Gospel, Westminster, Vt.

Born in 1789 in Walpole, N.H., Royal Gage worked for many years as a pioneer minster in northern Vermont. Among the many topics he discusses in this well-written treatise are the differing perspectives on slavery of Biblical scholars named Fuller and Wayland: 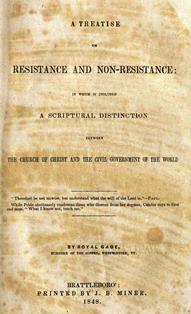 To meet these arguments, Mr. Wayland says, that the principles of the gospel were designed, when they became diffused, by teaching men the relations which they sustain to each other and their responsibility to God, to gradually effect the abolition of slavery. In his seventh letter, he says, “To have inculcated the right of the slave to freedom, and the duty of the master to liberate him, absolutely and immediately, while both were ignorant of the principles on which the precept was founded, and wholly uninfluenced by these principles, must have led to a universal social war.”

And Gage, himself, finds a third position on slavery and abolition, saying, “Neither Christ nor the apostles interfere directly with civil government, however unwise or unjust the laws.”

Cannibals All! or, Slaves without Masters (1857)
By George Fitzhugh

George Fitzhugh was a pro-slavery social theorist who argued “the negro is but a grown up child” in need of the economic and social protections of slavery. In his first book, Sociology for the South, published in 1854, Fitzhugh denounced capitalism as creating a “war of the rich with the poor, and the poor with one another.” In Cannibals All!, his second and more widely known book, Fitzhugh argued that not only did the Bible justify slavery but also that such a justification provided evidence of the truth of Christianity: 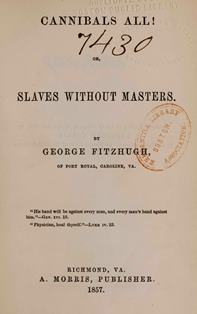 We have this consolation, that in rejecting as false and noxious all systems of moral philosophy, we are thrown upon the Bible, as containing the only true system of morals. We have attempted already to adduce three instances, in which the justification of slavery furnished new and additional evidence of the truth of Christianity. We will now add others.

It is notorious that infidelity appeared in the world, on an extensive scale, only contemporaneously with the abolition of slavery, and that it is now limited to countries where no domestic slavery exists. Besides, abolitionists are commonly infidels, as their speeches, conventions, and papers daily evince. Where there is no slavery, the minds of men are unsettled on all subjects, and there is, emphatically, faith and conviction about nothing. Their moral and social world is in a chaotic and anarchical state. Order, subordination and adaption have vanished; and with them, the belief in a Deity, the author of all order.

George Fitzhugh’s overall argument about the relationship between free labor, or non-slave labor, and slave labor is eerily familiar to some contemporaneous perspectives. In the preface to Cannibals All! or, Slaves without Masters, he states:

My chief aim has been to [sic] show, that Labor makes values, and Wit exploits and accumulates them; and hence to deduce the conclusion that the unrestricted exploitation of so-called free society, is more oppressive to the laborer than domestic slavery…

Yet, I believe that, under the banners of Socialism and more dangerous, because more delusive, Semi-Socialism, society is insensibly, and often unconsciously, marching to the utter abandonment of the most essential institutions, religion, family ties, property, and the restraints of justice. The present profession is, indeed, stop at the half-way house of No-Government and Free Love; but we are sure that in cannot halt and encamp in such quarters. Society will work out erroneous doctrines to their logical consequences, and detect error only by the experience of mischief. The world will only fall back on domestic slavery when all other social forms have failed and been exhausted. That hour may not be far off.

The Revivals: A Discourse Delivered in the First Congregational Unitarian Church in Philadelphia on Sunday April 11th, 1858 (1858)
By William Henry Furness

William Henry Furness was a clergyman, theologian, reformer, and abolitionist. In 1823 he graduated from Harvard University and became Minister of the First Unitarian Church of Philadelphia. As a staunch supporter of the rights of persons from all segments of society, he would not have agreed with many of the points George Fitzhugh made. In fact, he not only disagreed that slavery could be justified, Biblically or otherwise, he argued Christianity necessitated the abolition of slavery. His speech is largely in response to the growing strength of revivalism, also referred to as the holiness movement: 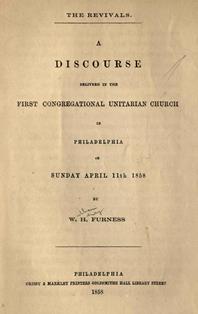 Now, my friends, as I solemnly believe, as I cannot help believing, that it is impossible and absurd to think of serving God while we are despising and oppressing our fellow-man, or countenancing others in despising and oppressing him, as this is my assured faith, how can I look with any satisfaction or hope upon a revival of that Religion which passes by the most sacred claims of Humanity, and allows men to believe that they can be accepted of God when they are trampling down into the dust his sacred image in the person of the slave? Such a religion is a pretence, an undisguised mockery before God, a gross fraud put upon man, teaching him to put the form for the life, the letter that kills, for the spirit that gives life. Instead of welcoming the revival of such a religion, I pray that God, in his mercy, may bury it deep beyond the possibility of a resurrection. We have tried it long, and it has so depraved and seared the conscience of the whole nation that, with all their wealth and intellectual power and activity, these [sic] people are blind to the supremacy of simple justice and insist upon building the fabric of their prosperity upon a gross violation of the Eternal Law of God.

I see in this movement no extraordinary manifestation of the spirit of Humanity. I do not see that the awakened consciences of these great gatherings are appalled at the guilt which we have incurred through the monstrous wrong which we are doing to our oppressed brother.

Anti-Slavery in Virginia: Extracts from Thos. Jefferson, Gen. Washington and Others Relative to the “Blighting Curse of Slavery” (1865)

The most interesting points about the “blighting curse of slavery” are raised not by Thomas Jefferson or George Washington but rather by one of the “others” not named in the document’s title. The author of this work, Commodore William Montgomery Crane, was an officer in the United States Navy during the First Barbary War and the War of 1812; in 1827 he was assigned command of the Mediterranean Squadron. In a series of numbered “queries,” reprinted here, Crane called into question the justness of several social practices, some of which would not be legally resolved until more than a century later. 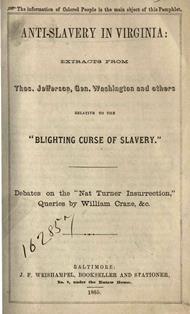 23. While the colors, black, and brown, and yellow are all comely enough when we ourselves choose them, in our apparel or any part of our equipage, and while the Creator has fastened these colors on a part of our race in such a manner that we can neither make nor remove them, and while, “God is no respecter of persons, but has made of one blood all nations of men to dwell on the face of all the earth,” is it not grossly wicked in us to indulge so much prejudice against the colored skin of our fellow beings as from that circumstance alone to deprive them of equal civil rights with ourselves?

24. If the same political rights and privileges which the white man possesses were allowed to the colored man, would this necessarily give the colored man any claim to the daughter of the white man in marriage? Are not political rights, and social or family rights, distinct things? Would they not continue separate, just as the respectable and the profligate, the poor and the rich, the learned and the illiterate now do? And if marriage were legalized, would connections of this kind bear any proportion to the now existing wide-spread criminal cohabitation between white men and colored women throughout the Southern States...

26. Does not an amalgamation of white and colored people, or a union of the two classes, already exist to so great an extent that they can never be separated? Can the strong ties of friendship and blood, mingled and interwoven for ages through five or six millions of people, ever be sundered? And are not these ties every day silently and secretly increasing, far beyond the utmost power of human prevention of control?

27. Can the white man be justified in denying inalienable rights to the colored man, because possibly matrimonial connections between the white and the colored race may in future take place? Have we not now an immense number of mulattos among us, and the number constantly increasing? And may it not be questioned whether the increase would be greater if marriage were legalized?

28. Is it not denying the white man an inalienable right, legally to deprive him of the object of his choice, of whatever color that choice may be?...

30. Will a just God sustain nine or ten millions (in 1832) of the self-styled most free, most virtuous and most enlightened, out of the eight or ten hundred millions of our race, in the indulgence of an unwarrantable prejudice against the colored skin of our depressed neighbors? (whom He commands us to love as ourselves.) And is there not awful reason to fear that, in accordance with his dealings with ancient nations, He will rather repay on the heads of white men the woes they have so abundantly inflicted on the Indian tribes of our country on the one hand, and on the poor African slave on the other?...

33. As the millennium approaches, and the light of truth through the influence of Bibles, of Sunday Schools, of missions and tracts, &c., &c., becomes effectual on the hearts of men, will not the free, Republican, Christian white man feel, that in denying the intelligent colored man equal civil rights with himself, simply because his skin is not white, he is robbing the colored man of that which he considers far dearer than any earthly possessions? And will not the white man determine that he will not be a robber?