A Crazy Verdict (as seen in the Washington Evening Star)

Look for this new Readex advertisement in the fall 2013 issue of Documents to the People, the official publication of the Government Documents Round Table (GODORT) of the American Library Association (ALA). 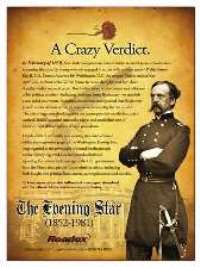 In February of 1859, New York Congressman Daniel Sickles received an anonymous note informing him that his young wife was engaged in a tryst with another man—Philip Barton Key II, U.S. District Attorney for Washington, D.C.  An enraged Sickles tracked Key down and, in front of the White House in broad daylight, shot him dead.  A guilty verdict seemed certain.  But Sickles’ relied on the talents and influence of his political cronies—including President James Buchanan—to establish a one-sided courtroom.  Incredibly, the defense team posited that Sickles was in such a state of distress that he bore no accountability for the murder.  The only thing more shocking than the bizarre premise was the fact that it worked.  Sickles’ acquittal stunned a nation and established one of history’s most debated pieces of legal precedence.

Details of the Key murder and the ensuing trial can be found within the engrossing pages of the Washington Evening Star, long regarded as the newspaper of record for the nation’s capital.  Newly digitized, the Star provides firsthand reporting for unmatched coverage of the U.S. government from the Pierce through the Carter administrations, including fresh insight into political lives, careers, accomplishments and scandals.

To learn more about this influential newspaper, download our free eBook. To request a trial for your institution, please write to readexmarketing@readex.com.