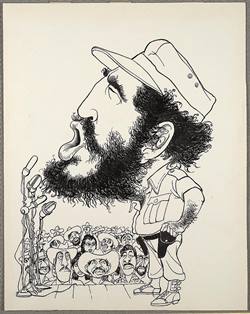 From the United States’ 1962 embargo until the present-day reestablishment of diplomatic and economic relations, Cuba has struggled to find a secure economic footing. This month’s highlights from Joint Publications Research Service (JPRS) Reports, 1957-1995, show the magnitude of that undertaking from the perspectives of then-Prime Minister Fidel Castro, Ernesto “Che” Guevara, and in its fundamentals relating to the food supply.

“…the economy is hard, it is hard, it does not cry. Then, this is the problem. It is almost Communist, but it happens that we are building socialism and there are still many persons who are not even on the threshold of socialism...”

Prime Minister Castro states this in the beginning of this excerpted interview, then elaborates on the challenges his nation faced with regard to education and public health. It’s clear that he was deeply concerned with the human aspect of development, and the interview format lends greater focus to his remarks than can be easily drawn from his more lengthy speeches.

Regulations on Food Rationing in Cuba

A chicken in every pot, perhaps, but by law only once each month—this is socialism at its roots. These three brief documents lay out the essentials of food rationing during the early years of Cuba’s centralized economy.

Industrial Tasks of the Cuban Revolution in Future Years

“Higher courses on radio and television to bring all workers up to sixth-grade level.”

Sugar. Steel. Cement. This report shows the poet of Cuba’s revolution hard at work in the less sanguinary, more prosaic tasks of nation-building.