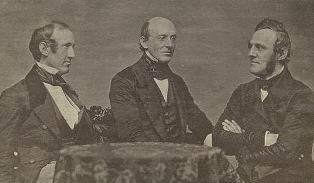 In their first annual report, the Ladies’ New-York City Anti-Slavery Society referred to both Thompson’s role in their society’s organization and his unceremonious departure from the United States:

We cannot advert to the commencement of our career, without referring also to one whose name has been strangely associated with the very extremes of good and ill in character—that illustrious philanthropist whom all Britain honored for his devotion to the cause of human liberty, while for no worse or better reason, America hunted him from her shores, as a “felon and a foe.” Feeling as we do, the deep national disgrace incurred by this transaction, and cherishing the most grateful remembrance of the devoted and invaluable services of George Thompson is the cause of American Abolition, we treasure it as one of the most interesting facts in the history of our Society, that we were permitted to enjoy his assistance at its formation. Who that came within the sound of the mighty torrent of his eloquence on that occasion can cease to remember it, or to be impelled by it to untiring action, while slavery endures?

We cannot advert to the time when our society was organized, without a vivid recollection and grateful mention of our distinguished friend and the friend of humanity, George Thompson, whose impassioned eloquence, wise counsels and fervent prayers, delighted, instructed, and strengthened us in the good work in which we had just engaged.

Describing the role and responsibility of women in the abolitionist movement, the Concord Society wrote:

We believe, that in this work, woman, if true to her character, can accomplish something, without stepping out of the sphere assigned her in the order of Providence… While we remember how much our sex, especially, owe to the Christian religion, how can we but be ardently solicitous that the blessings of this religion shall be extended to our colored sisters? God forbid that we should not! We weep—every virtuous sympathy of our souls is moved at the thought of their sorrows, their miserable degradation. But it is not enough that we weep over their wrongs—it is not enough that we pray over them. We must add efforts to our piety and our prayers—earnest, persevering, self-denying efforts.And they concluded their report with this advice, “Whenever we are called to ‘give an answer’ in defence of the opinions we have adopted, let us be calm, yet firm and earnest. In a word, let all our ‘conversation be as becometh women professing godliness.’ Whatever other ornaments are omitted, let us be careful always to wear that of ‘a meek and quiet spirit.’

The Philadelphia Female Anti-Slavery Society began its third annual report with “cause for gratitude and encouragement” due to the society’s rapid growth from 20 to 80 members.Turning to the Society’s activities of the previous year, they reported the works of a committee to visit and aid “in any practical way” the “schools for colored children in this city” and a committee “for the establishment of a course of scientific lectures, which our colored friends, were particularly invited to attend.”

The reports of these committees have usually been satisfactory. If those who deny to the colored man, almost the name of man, and who, after having fettered, and crushed, and even sought to obliterate his mental faculties, gravely tell us, that God has formed him with an intellect so weak that all efforts for its cultivation are useless; —if such persons would visit the schools appropriated to this portion of the community, and watch the mental development  and growth of the little child, who has not yet felt the “cord of caste,” and is too young to read its future destiny, if they would trace the workings of the maturer mind, in its struggles with difficulties, which pride and prejudice have placed in his path, and see him vanquishing them all, and amassing intellectual riches, for their intrinsic worth alone, (for to him, they open no avenues to fame or fortune) their prejudice might be exchanged for respect, and their contempt for admiration.

The Society continued its uplifting report, describing the effectiveness of petitioning Congress for the abolition of slavery:

We are frequently asked, What good have petitions done? The full amount of good produced by them, is yet to be revealed. Some of their effects we have seen, in the discussions which they have elicited in the Halls of Congress, and in the storms of wrath, which have gathered there, to burst on the heads of abolitionists. We knew that our petitions were not ineffectual, when the wise men of the South, sent back to us, the cry, “Impertinent intermeddlers!” “Incarnate devils!” etc. We knew that they were at work, when statesmen thought it necessary to make mighty efforts for their suppression.

The Philadelphia Female Anti-Slavery Society’s fourth annual report is a little less upbeat but perhaps more realistic than the previous year’s. Recognizing the difficult road ahead, the report took the long view:

To overthrow an institution which has grown up, to giant size, in the heart of a mighty nation; which has its foundation in the strongest depraved principles of human nature; which is surrounded and sustained by the sanctions of law and public opinion, and protected by the suffrage of a false religion; to destroy and utterly lay waste such an institution, and to do it by moral influence on the minds of community, is not the work of a day or a year. Such a work is ours. It can be accomplished only by constant and unwearied effort day after day, and year after year, by seizing every opportunity to pour a ray of light on the darkened understanding, or a softening influence on the hardened heart, till the mind of the nation is renovated, and the pillars of slavery are removed. And if we do not see the edifice tremble at our touch, let us not imagine that we are doing nothing. Already is it deeply undermined, and if we may remove but one of its foundation stones, or accelerated, by one hour, its fall, let us not say, We have labored in vain, or spent our strength for nought.

Have Faith in God and the People (1864)
Speech of Hon. Wm. D. Kelley, of Pennsylania

Thirty years after George Thompson’s lecture tour the goals of the abolitionist societies were on the cusp of being realized. In 1864, the House of Representative considered a joint resolution that proposed to amend the Constitution of the United States to state, “Neither slavery nor involuntary servitude....shall exist within the United States or any place subject to their jurisdiction.”

Let justice to all men be our aim. Let us establish freedom as a permanent institution, and make it universal. I appeal to those gentlemen on the other side of the House who shrink from the abhorrent doctrines of the leaders of their party; to those of you who have read the Beautitudes and remember that at your mothers’ knees you lisped a prayer that God would deal gently even with those who had trespassed against you, to vote with us, and not withhold from the intelligent people of this country the right to pass upon this question so fraught with blessed or fearful consequences. We do not make the amendment. We cannot make it. We can but initiate it. Gentlemen, you who profess to have such abiding confidence in the people, will you let them have an opportunity to say whether the Constitution shall be constitutionally amended? In their name; in the name of Democracy, in the name of Humanity, in the name of Christianity, I pray you for once to make good your professions and confide in the people sufficiently to permit them to say yea or nay on the question whether they will peaceably and constitutionally extinguish the scourge and disgrace of our common country, human slavery.