"A Dastardly Outrage": Kate Brown and the Washington-Alexandria Railroad Case

[Kate Brown, a U.S. Senate laundress promoted to retiring room attendant, is most notable for winning the 1873 Supreme Court Case Railroad Company v. Brown. This spring Brown was the focus of a winning entry in a research competition sponsored by the Oxford African American Studies Center and the Gilder Lehrman Institute of American History. That winning entry on Brown, which will be published in the online African American National Biography, was researched and written by McLean (VA) High School students Brian Tong and Theodore Lin, who utilized the U.S. Congressional Serial Set among other sources. The article on Kate Brown below was written by Betty K. Koed, Assistant Historian in the U.S. Senate Historical Office. It appeared in the September 2008 issue of The Readex Report, where it was published with permission from Unum, a newsletter published by the Office of the Secretary of the United States Senate.]

As a Senate employee “in charge of the ladies’ retiring room,” Kate Brown worked hard, washing towels and laundering curtains. More than one senator commented on her “lady-like character” and described her as “an educated, intelligent, respectable, and to all appearance refined woman.” Although not known as a rebel or a troublemaker, on a chilly afternoon in February 1868 Kate Brown rebelled and stirred up a legal storm that went all the way to the Supreme Court. It was nearly 3:00 p.m. on February 8, 1868, when Kate Brown pulled out her return ticket and stepped aboard a train to take her from Alexandria, Virginia, where she had been visiting a sick relative, back home to Washington, D.C. With her foot still on the step, Brown was accosted by the rail line’s private police officer, who called from the platform that she must take the other car. “This car will do,” the 28 year-old Brown replied quietly and stepped inside the train. At that point, as Brown later told a Senate committee investigating the incident, “the policeman ran up and told me I could not ride in that car... he said that car was for ladies.” Of course, Kate Brown was a lady, but she was also African American. 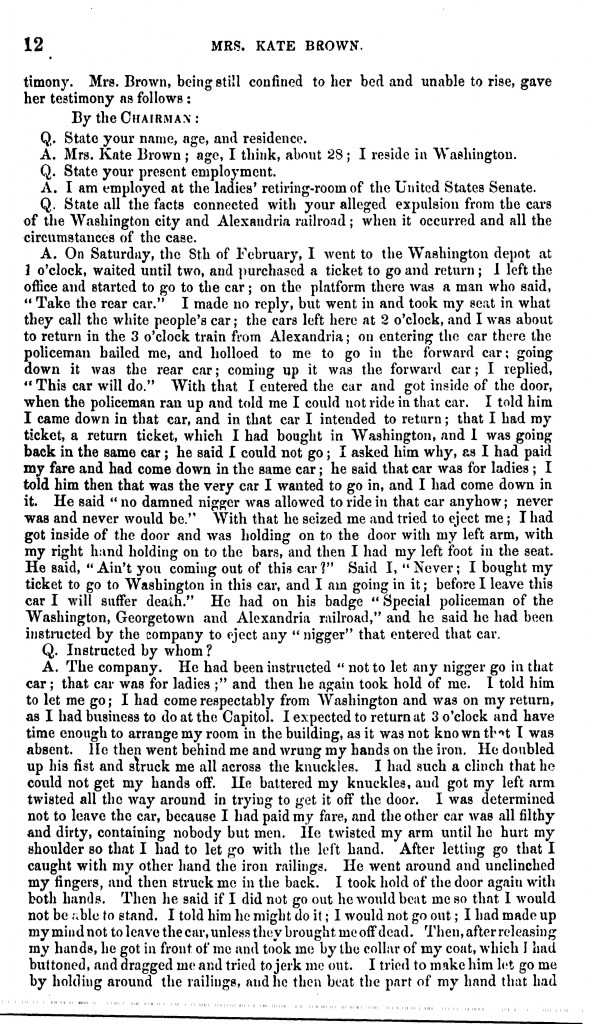 Because of her race, the policeman insisted that Brown was not “allowed to ride in that car anyhow; never was and never would be.” Not one to be deterred, Brown responded to the irate man: “I bought my ticket to go to Washington in this car, and I am going in it; before I leave this car I will suffer death.” A violent altercation followed, resulting in Brown being physically ejected from the train, thrown onto the platform, and dragged along the pavement. Fortunately another Senate employee, B. H. Hinds, a clerk for the Committee on Public Buildings and Grounds, arrived on the scene and came to her assistance. Hinds tried to convince Brown to ride in the “colored car,” but the presence of many disorderly men in the car frightened her. “I then went to her and told her that if she would get into the car,” Hinds explained to the committee, “I would go with her and see that she would not be molested.” Brown agreed, and the two traveled together to Washington where she sought medical help. The injuries she sustained kept her in bed for weeks to come.

The case quickly gained attention. “A dastardly outrage was perpetrated in Alexandria on Saturday afternoon,” commented one newspaper, “which is justly considered a disgrace to this age of civilization.” Senators Charles Sumner and Justin Morrill demanded an investigation and called for reparations. In the days that followed, the Senate Committee on the District of Columbia heard testimony from eyewitnesses to the violent incident, officials of the Alexandria and Washington Railroad Company, and from Brown’s doctor. Too badly injured to appear before the committee, Kate Brown gave testimony from her sick bed to committee chairman James Harlan.

In time, Brown sued the railroad company. The legal aspects of the case rested, in part, on the fact that the railroad’s de facto segregation policy was unevenly enforced. On the trip from Washington to Alexandria no such policy was in place, but in Alexandria the railroad’s management hired private officers to enforce segregation. Segregated trains were the norm throughout many states, but in the case of this particular rail line it was illegal. The 1863 congressional charter authorizing the railroad included—at the insistence of Charles Sumner—one key sentence: “And provided, also, That no person shall be excluded from the cars on account of race.” Since the railroad provided two identical cars on the line, the company responded with an argument of “separate but equal.”

The District of Columbia courts awarded $1,500 in damages to Brown. The rail company appealed, and the case eventually went before the Supreme Court. On November 17, 1873, in an opinion delivered by Justice David Davis, the Court held that the 1863 charter remained in force and that racial segregation on the line was not allowed under the charter. Davis dismissed the company’s “separate but equal” argument as “an ingenious attempt to evade a compliance with the obvious meaning of the requirement” of the 1863 charter and decided in favor of Kate Brown.

Brown remained a Senate employee until 1881. Except for the occasional footnote to “Railroad Company v. Brown” in legal histories, her act of rebellion has largely been forgotten; just one of many courageous attempts at civil disobedience that eventually fueled the civil rights movement of the mid-20th century. A growing interest in the history of Capitol Hill workers has brought new attention to the old story, however, and just recently the Congressional Black Associates honored Brown by naming one of its “Trailblazer Awards” in her honor.

Editor's Note: Sources for the author's research include the Report from the U.S. Congressional Serial Set on "the facts connected with the forcible ejection from the cars of the Alexandria and Washington Railroad of one of the employees of the Senate, on account of race..." An excerpt from this 26-page document—Report of the Senate Committee on the District of Columbia, June 17, 1868 (No. 131, 40th Congress, 2nd Session)—offers this testimony from Mrs. Kate Brown.