The Death of Winston Churchill: As Seen in One American Newspaper Archive 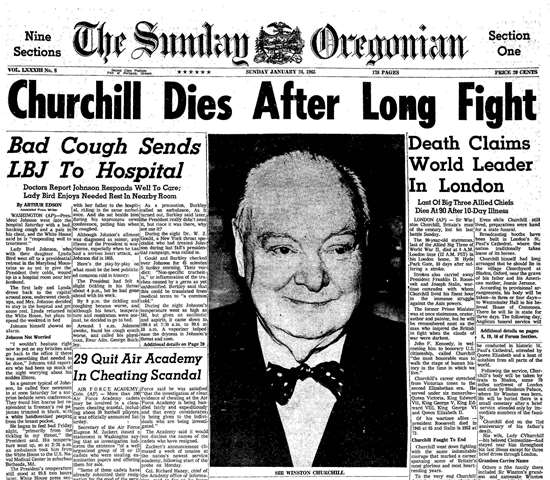 January 24, 2015, was the 50th anniversary of Winston Churchill’s death. The soldier, politician and writer lived a long and notable life, which was extensively covered in American newspapers. From his 1899 prison escape during the Boer War, he was in the public eye, serving in parliament from 1900 on and in government almost continuously from 1908 to 1929. He took a brief time away from government during World War I, when, following the battle of Gallipoli—which he championed, but which was a failure—he resigned as first Lord of Admiralty to serve on the front lines.

From 1929 through the 1930s, he was an early and implacable foe of Hitler and the Nazis. He decried the Munich Agreement. He argued for the rearming of Britain. He re-entered government in 1939 and became Prime Minister in 1940. He made mistakes in and out of office. He returned Britain to the gold standard as Chancellor of the Exchequer. He supported the King in the Abdication Crisis. He was against freedom for India. There was no other politician in Britain who could have rallied the people and worked with Roosevelt and, later, Stalin to win World War II.

Churchill's death was front page news across the United States. Pictured above is the front page of The Sunday Oregonian, published on January 24, 1965. It has a blaring headline, a giant photo of him, and a news article about his death. There are also directions to find other articles about him deeper in the paper, including the following page of photographs of him at various ages.

The issue also included a two-page package of articles and photos about his life. On its first page there was an article about his early years, from birth until he became Prime Minister, and one on the impact of his rhetoric on the British home front during World War II. The page also contains photos of him as a decorated young soldier, on his wedding day, meeting with Stalin at a wartime summit, and with Queen Elizabeth II when he left office in 1955. 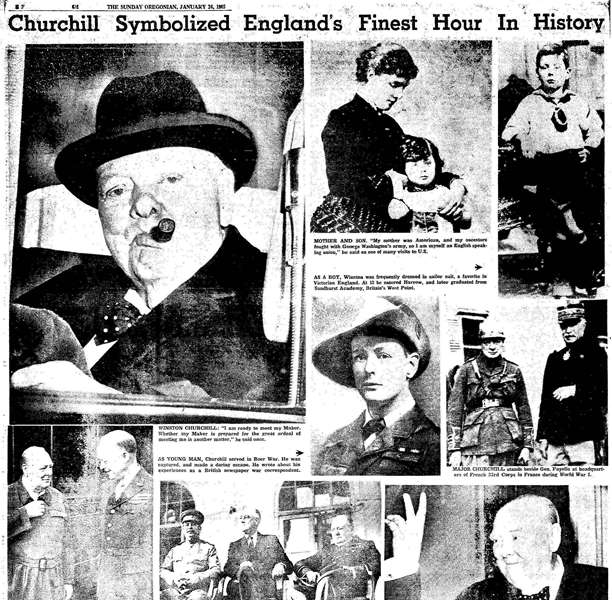 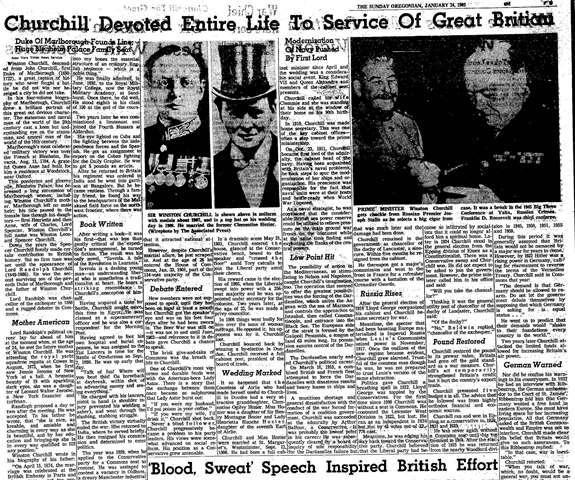 The second page has three photos: General Eisenhower and Churchill shortly before the D-Day invasion, Churchill on horseback during a boar hunt in France, and a small head shot. The page also contains an article about his loss of office immediately after the end of World War II and his return to office by the end of the 1940s. In addition, it offers reminiscences by a journalist who had met Churchill a few time during the war, an amusing story of him agreeing with a youngster that he was, in fact, the greatest man on the earth, and a lengthy piece about missteps and obstacles in his life and career. 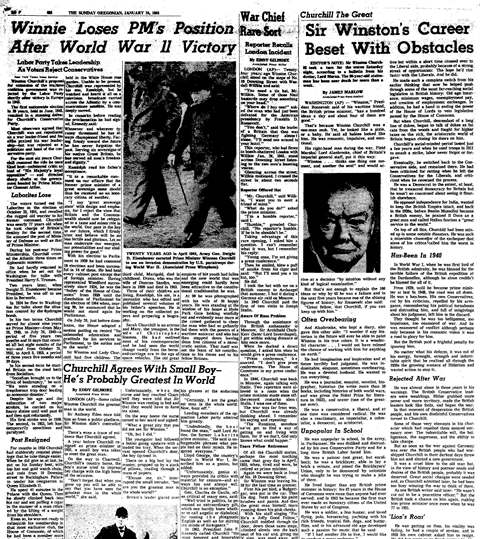 Not a bad send off for an amazing life.

For more information about the Oregonian, or other American Newspaper Archives, please contact readexmarketing@readex.com.