December’s release of Early American Imprints, Series II: Supplement 2 from the American Antiquarian Society includes several instructive stories designed to set children on a worthy path in life. Some are prose while others are poetry, and some are illustrated. All are rare. 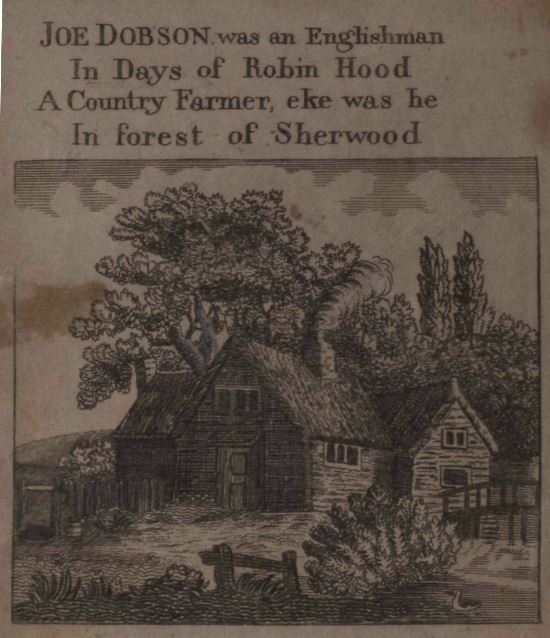 This imprint was published in Philadelphia in 1817 and sold for twenty-five cents. The National Library of Australia provides the only citation on-line other than the American Antiquarian Society. It states that it was “First published in London with title, Cobler [sic], stick to your last, or, The adventures of Joe Dobson / by B.A.T.” The AAS citation also refers to the earlier London publication noting that it appeared in 1809. The complete manuscript appears to be unique to this collection.

Each page of text is illustrated with an engraving, each of which is clearly reproduced. It begins:

Joe Dobson was an Englishman

In Days of Robin Hood

A Country Farmer, eke was he

In forest of Sherwood

Joe Dobson said unto his Dame,

I vow that I could do,

More household work in any day,

Than you can do in two.

She soon replied, I do declare

Your words you shall fulfil,

To-morrow you my place shall take,

I’ll to the plow and mill. 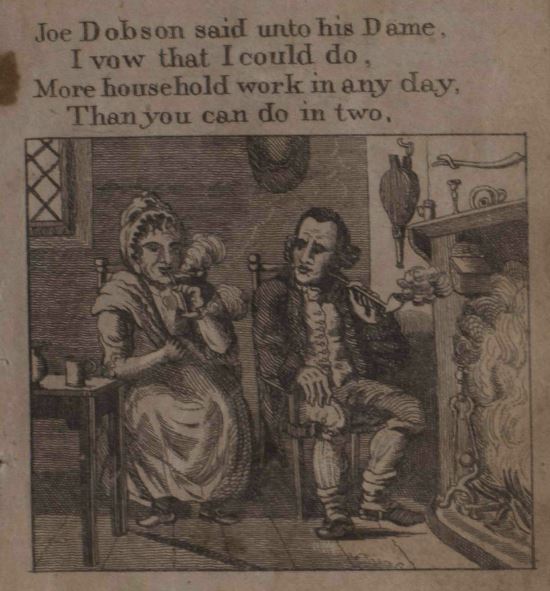 Perhaps the reader can anticipate where this is headed. Joe spends the day careening from one disaster to another, incurring injury and defeat at every turn. In another instance:

Away went Joe, to wash the Cloaths,

But sore against his will,

The water scalded both his hands,

He went to hand the cloaths to dry,

It was a lovely day,

But oh, alas! a Magpie came

And stole his Wig away 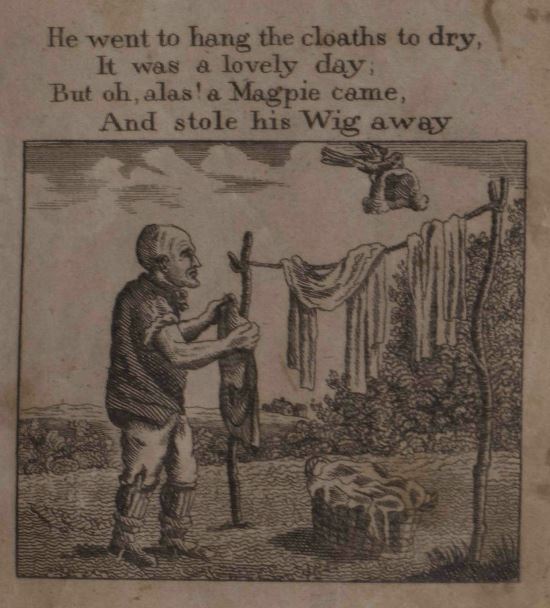 After an apparently successful day of taking “to the plow and mill,” –

Quite stout and blithe was she,

And found poor Joe all bruis’d and ill,

Fatigu’d as he could be. 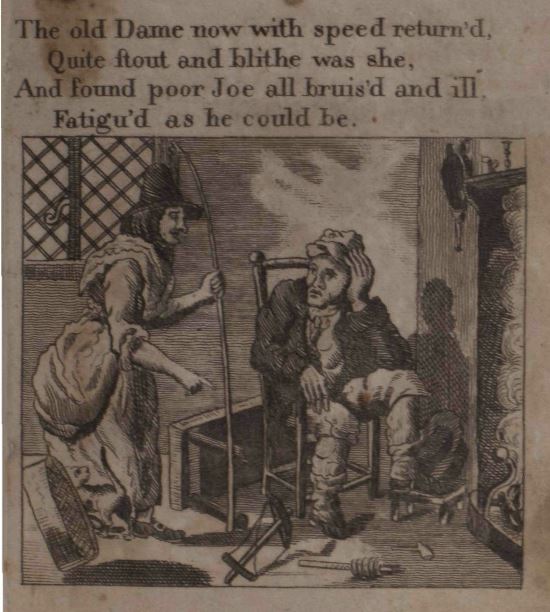 Soon she sets all things aright, and they sit down to meat and ale.

Whilst they partook this dainty meal.

He was convinc’d that wives could do, 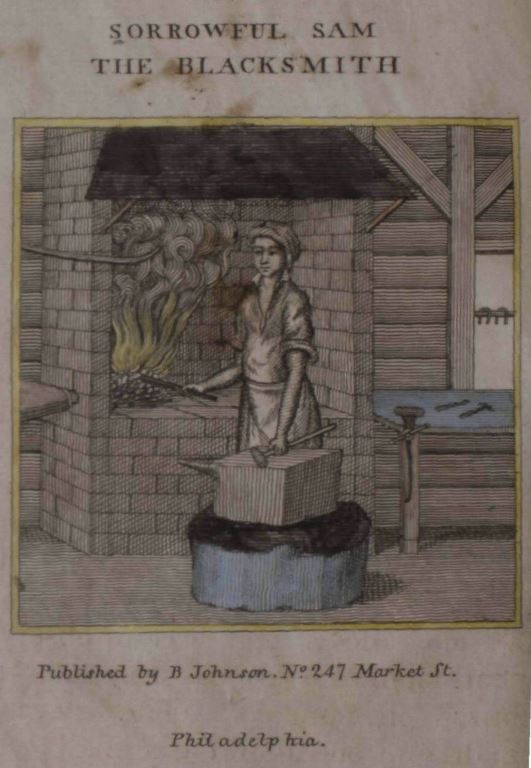 This story relates the lives of two blacksmiths whose taste for drink had harmful effects on their families and themselves. Each responded differently to the efforts of a wealthy and benign neighbor’s attempts to set them right.

Mr. Stephens, a very worthy gentleman, having bought a considerable estate in Devon-

shire, had no sooner taken possession of the manor-house, than he began to turn in his mind, how he might prove useful to his neighbours. He thought the surest means to find out the most deserving, was to observe what families were most regular at church on Sundays.

Early he discovered the family of the blacksmith John Parker and resolved to visit them. He found Parker’s wife Mary at home with her five children all well engaged in their various duties. While Mary patched her husband’s waistcoat, her infant slept on her lap. Each of the older children were spinning, sewing, learning the catechism, or tending the fire.

[A] lord’s house could not be neater; the tables were rubbed as bright as a looking-glass; and the pewter dishes on the shelf shone like silver.

Mr. Stephens sits with the family and converses with Mary. She speaks of the advantage to her children of the local school which was free to all youngsters who present themselves in a tidy manner and pay attention to their lessons. She rues the fact that there are some in the neighborhood who cannot be bothered to groom their children, depriving them of the advantage of becoming educated. She lauds her children and their accomplishments, but she confesses to having a heavy heart. When asked why, she responds.

‘My lot, sir’ replied Mary, ‘is not harder than that of many others; there is an ale-house on the common, called the Tennis-Court, which causes more poverty in the parish, than either dearness of provisions, or want of labour.

She sends her children out to play lest they might hear her speak critically of their father “and make them undutiful to him…” She then describes the other blacksmith’s wife, Susan Waters, “whose husband is more drunken than mine, if possible.” Unlike Mary, Susan is as fond of drink as her husband Sam. No sooner does Sam have a few shillings in hand…

...then off they are gone tippling, nor do they think of returning to their families till every farthing is spent. As to that, Susan Waters loves work as little as Sam, she is a lazy, dirty, gossiping body, and won’t even take the trouble to clean and send her children to school, only because they were properly corrected by the master for cursing and swearing, and for seldom getting to school of a morning till other children were going home to dinner; so she lets them go strolling like vagabonds all about the parish, stealing apples, breaking hedges, and committing a multitude of other little trespasses on the neighbours.

Subsequently, Mr. Stephens visited the Waters family where he found Sam asleep in his shop despite the work that awaited him, “several of his children all rags and tatters,” and when he

…peeped into the house, it stunk with filth; it shocked him to think, how people could consent to live like pigs, rather than take the smallest pains to keep themselves fresh and clean, for though folks may be ever so poor, ‘tis nothing but their own laziness need keep them dirty. The furniture of the kitchen, he observed, had all been very good, but for want of the smith’s driving an occasional nail, every thing was going to rack and ruin…

The visitor remonstrates Mrs. Waters for allowing her wastrel husband to excuse her own neglect of home and children warning her that “that many a poor fellow, Susan, has been brought to the gallows by his mother’s folly…”

Mr. Stephens pursues his determination to reform his neighbors by rewarding their sobriety and industry. After a particularly ugly, drunken incident at the Tennis-Court, the benefactor is able to bring Parker to his senses. Waters is less tractable. Only a devastating injury, the result of a drunken stupor, brings him around. While he becomes penitent, and his family’s circumstances improve, Parker and his family thrive. At the same time, “the fat landlord of the Tennis-court died of dropsy, brought on him by hard drinking, the justices would never grant the house another license…”

Lest the reader conclude that this is a temperance tract, it should be noted that the author concludes that when the Tennis-court closed –

‘Tis surprising to tell, how much, in the course of a few years, this lessened the poor rates, there being no temptation at hand, to draw labouring men from their families, insomuch that by not drinking the earnings of a week in an evening at the public house, they were soon enabled to brew a cask of good beer at home. 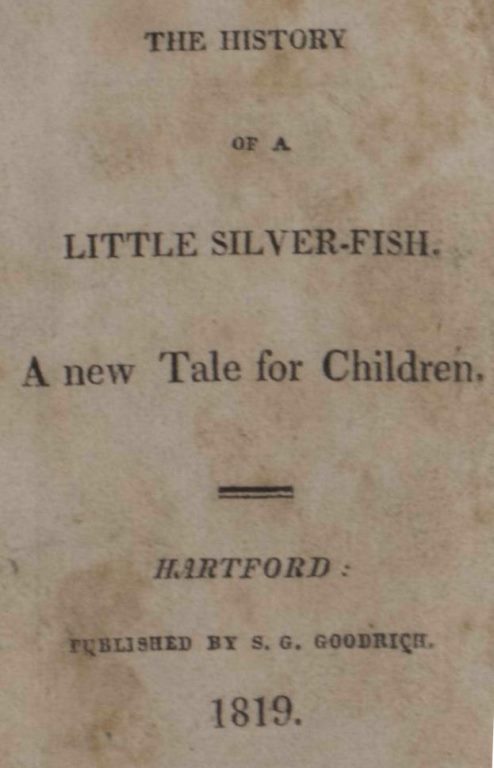 The History of a Little Silver-Fish: A New Tale for Children (1819)

Samuel Griswold Goodrich was an American author who became wealthy using the pseudonym Peter Parley beginning in 1827. This particular imprint anteceded that success.

There are some children who do not love to obey their parents. When bid to go of errands—to refrain from play, or to perform some kind of labor these children murmur and disobey. But I hope my readers are all of a different character: I hope they know, that in comparison with their parents they are very ignorant and quite unable to direct their own conduct without advice. Children should always remember, that their parents being older, and having more experience are very often able to discover danger, and to foresee benefits, which are invisible to them.

Such an unseeing child was the little silver-fish. His youth was spent in an ideal stream and under the guidance of wise and loving parents.

When our little trout had grown to be a fine and beautiful fish, its parents one day called it to them and addressed it as follows. “Our dear child, we are very happy to have found you so dutiful and promising. If you continue to behave as dutifully and as kindly to your parents and friends as you have heretofore done, we do not doubt but you will be respectable and happy. In truth, such is our confidence in your discretion, that we are going to give you a little house of your own at a small distance from ours, where you can live and amuse yourself as you please.

They warn him of the dangers that lurk in their beautiful stream including baited fishing hooks, larger, predatory fish, and the mill-dam over “which thousands of our species have plunged.”

Alas, the little trout, freed from his parents’ presence, disregards their counsel and embarks on an escalating series of misadventures which ultimately end in the ocean where despite his endeavors “to escape in vain—the serpent’s jaws crushed him forever.” This is a harsh lesson clearly meant to warn, if not terrify, wayward children.