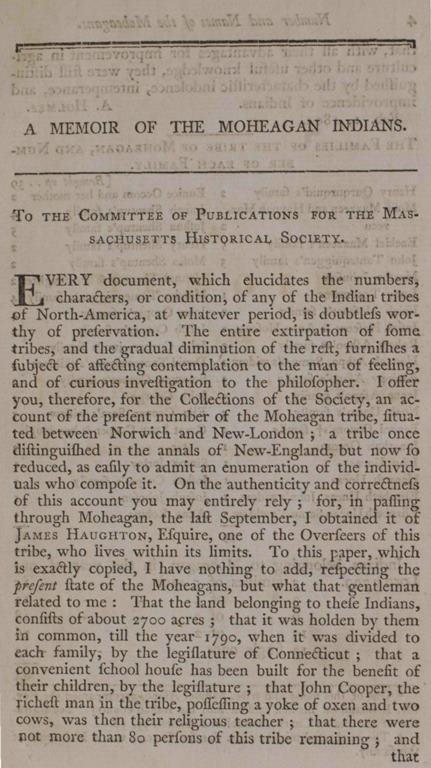 Holmes then describes the land in Connecticut where the diminished tribe dwelt explaining that “it was holden by them in common, till the year 1790, when it was divided to each family, by the legislature of Connecticut…” He further relates that there was a school house, that the richest member of the tribe owned a yoke of oxen and two cows and was the religious leader, and that there were no more than 80 people remaining.

The limits of his compassion are revealed in his final statement:

…that, with all their advantages for improvement in agriculture and other useful knowledge, they were still distinguished by the characteristic indolence, intemperance, and improvidence of Indians.

Haughton enumerated and named all of the tribe members in 1799. The mix of what seem to be ancient tribal names with English and Christian names is striking. Surnames include Qurqurquid, Tantequiggen, Ashpo, Cooper, George, and Occom, while the first names are almost all distinctly Christian and include Moses, Ezekiel, Noah, Martha, Eunice, and Elizabeth. He points out that “The celebrated minister, Mr. Samson Occom, was a Moheagan of this [Occom] family.” 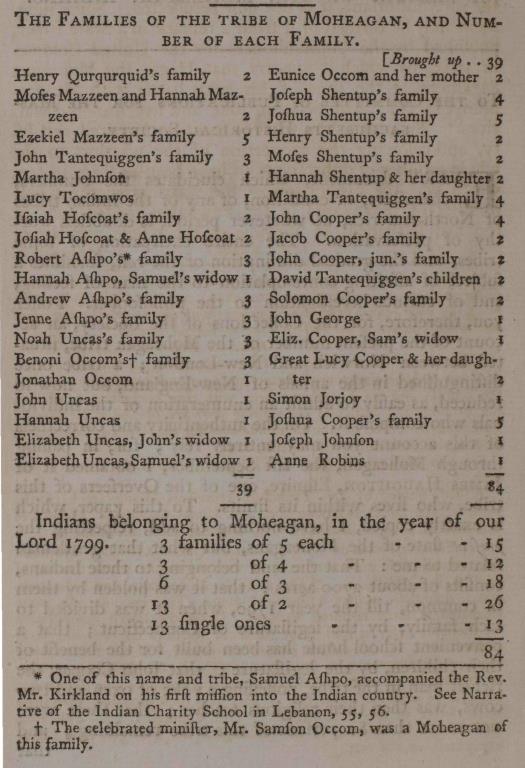 Haughtone presents a history of the tribe, arguing that they were more likely to have been a branch of the Pequots than a distinct tribe who took over some of that tribe’s lands when they were defeated by the English. As he describes the specific territory we are again struck by the admixture of place names; Lyme, Groton, Ah-yo-sup-suck, Mah-man-suck, Stonington, Man-hum-squeeg, Bolton, Egunk-sank-a-poug, and Ashford among others.

Haughton’s history seems to have been well researched and includes footnotes and citations. He was particularly interested in land transactions between the natives and the colonialists. Uncas was the name of the sachem of the Mohegans. He was a friend to the English and made many deals with them:

In 1638, articles of agreement were made at Hartford between Uncas and the English people of Connecticut. In 1640, Uncas, on receiving presents to his satisfaction, “by his certain writing,” granted to the governor and magistrates of the English on Connecticut river all his lands, called by whatever name, to dispose of as their own, reserving only the ground then planted by him for himself and the Moheagans. In 1641, he granted to Henry Whitfield, William Leet and others, certain lands “east of the East River” [somewhere near Guilford], “in consideration of 4 coats, 2 kettles, 4 fathoms of wampum, 4 hatchets, and 3 hoes.”

Toward the conclusion of this history we are provided with “Specimen of the Moheagan language, taken at Cambridge, February 28, 1804.”  This includes a translation of a prayer.

God created the world and all things in time, place, order, and number. 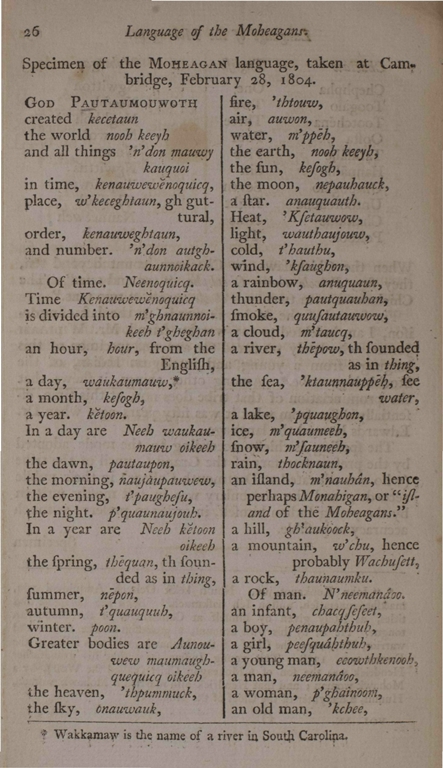 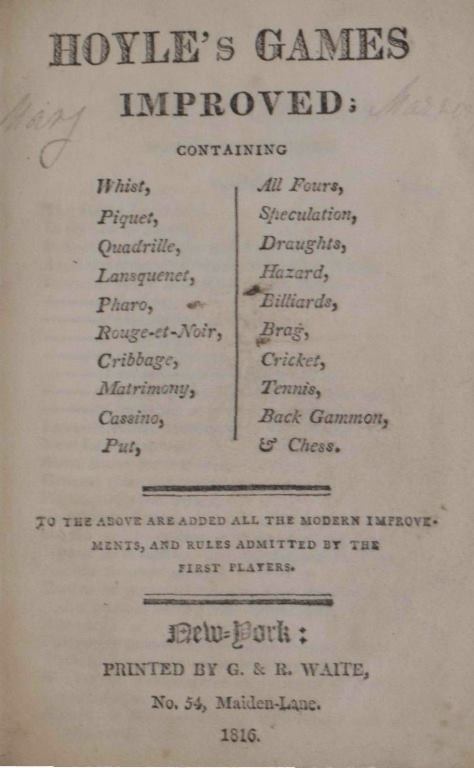 Edmond Hoyle (1672-1769) is still known today as a result of his encyclopedic collection of rules for myriad games. His rules have been through many revised editions. This one was published in 1816. The table of contents spans six pages and makes entertaining reading. The rules for Whist alone run to two pages which must have been an indication of the popularity and complexity of this card game. 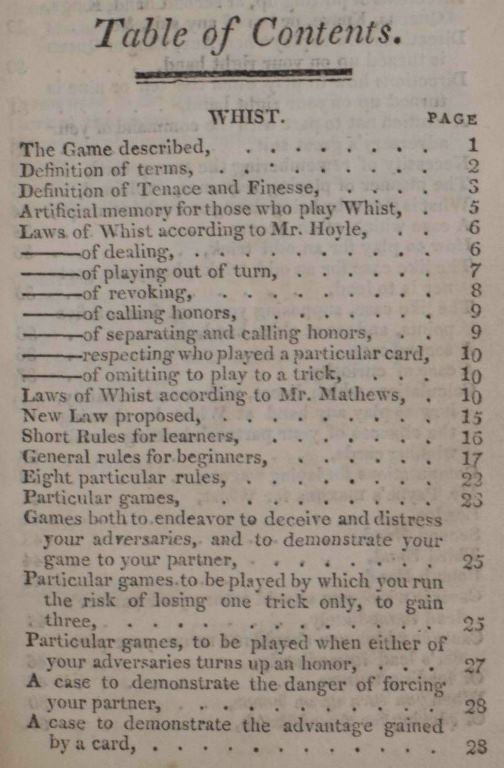 Subsequent listings become considerably briefer once Whist is dispensed with. There are rules for Piquet and Quadrille each of which includes the entry Calculations. Lansquenet, Pharo, Matrimony, Cassino, Put, All Fours, and Speculation all have entries. But Hoyle does not restrict himself to card games only. Cricket rules are precise and exacting. 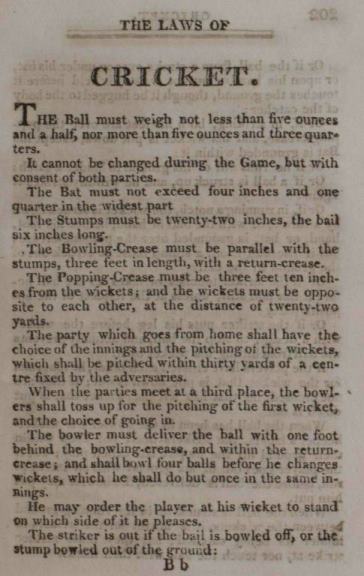 It cannot be changed during the Game, but with consent of both parties.

The Bat must not exceed four inches and one quarter in the widest part.

The Stumps must be twenty-two inches, the bail six inches long.

The Bowling-Crease must be parallel with the stumps, three feet in length, with a return-crease.

The Popping-crease must be three feet ten inches from the wickets; and the and the wickets must be opposite to each other, at the distance of twenty-two yards....

The rules for the batsman include the ways he may be put out.

The striker is out if the bail is bowled off, or the stump bowled out of the ground:

Or if the ball, from a stroke over or under his bat, or upon his hands (but not wrists) is held before it touches the ground, though it be hugged to the body of the catcher:

Or if, in striking, both his feet are over the popping crease, and his wicket is put down, except his Bat is grounded within it:

Or if he runs out of his ground to hinder a catch:

Or if a ball is struck up, and he willfully strikes it again:

Or if, in running a notch, the wicket is struck down by a throw, or with the ball in hand, before his foot, hand, or bat, is grounded over the popping-crease; but if the ball I off, a stump must be struck out of the ground by the ball:

Or if the striker touches or takes up the ball before it has lain still, unless at the request of the opposite party:

Or if the striker puts his leg before the wicket with a design to stop the ball, and actually prevents the ball from hitting his wicket by it.

If that is entirely clear, the reader can proceed to the rules for tennis, backgammon, and chess which will seem modest by comparison. 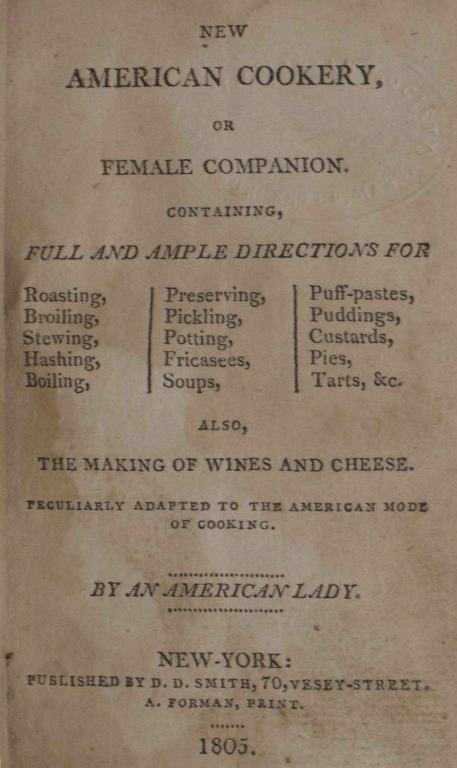 In her preface, the author explains her purpose:

Amongst the various arts which most essentially contribute to the gratification of the human species, there is none more deservedly worthy of attention than COOKERY; for, though there some particular branches of knowledge which may be peculiarly interesting to one class of individuals and some to another, the art of rendering a dish of victuals as palatable as possible, will certainly be deemed of considerable importance to all.

She further explains why the many cookery books that have been published in Europe and imported to the United States are not useful:

…but, from the abstruse style in which they are written; the complicated and sometimes contradictory directions which they contain, and the difficulty of procuring many of the ingredients, they can be of little or no utility in this country.

The Lady’s goal is

...to lay before our fair countrywomen a system which, if duly attended to, will not only entitle them to the character of excellent housewives, but also greatly contribute to render their husbands, and those who partake of the hospitality of their tables, cheerful, contented, and happy.

Among the included recipes are these for Election Cake, Tongue Pie and Whipt Syllabub: 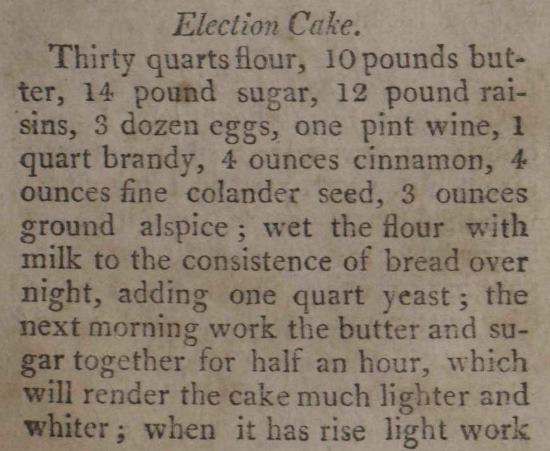 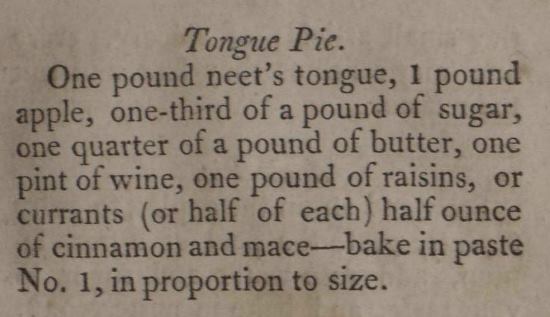 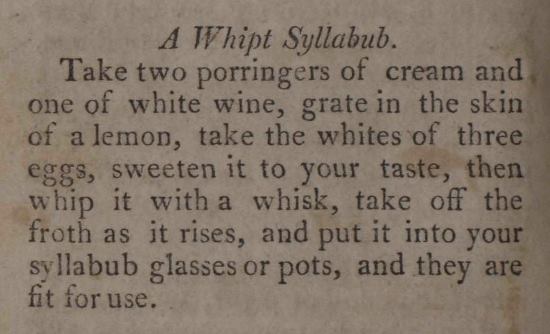 While the recipes in this book may have been as clear and easy to follow as the author promised, contemporary cooks may not find them wholly satisfactory. Here is the way “To alamode a Round of Beef.”

To a 14 or 16lb. round of beef, put one ounce salt petre, 48 hours after stuff it with the following: one and an half pound beef, half a pound salt pork, two pound grated bread, chop all fine and rub in half pound butter, salt, pepper, and cayenne, summer savory, thyme; lay it on scewers [sic] in a large pot, over 3 pints hot water (which it must occasionally be supplied with) the steam of which in 4 or 5 hours will render the round tender if over a moderate fire; when tender, take away the gravy and thicken with flour and butter, and boil—brown the round with butter  and flour, adding ketchup and wine to your taste. 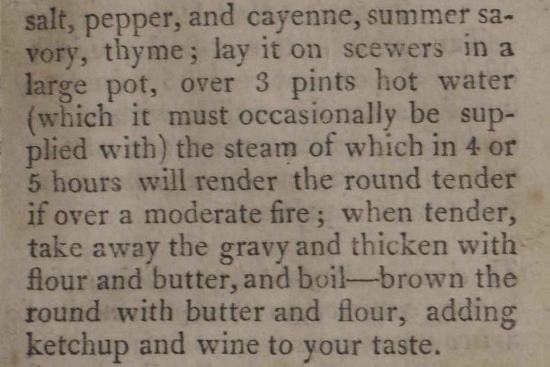 Perhaps this is more clearly understood than the rules of cricket, but it may leave something to be desired.