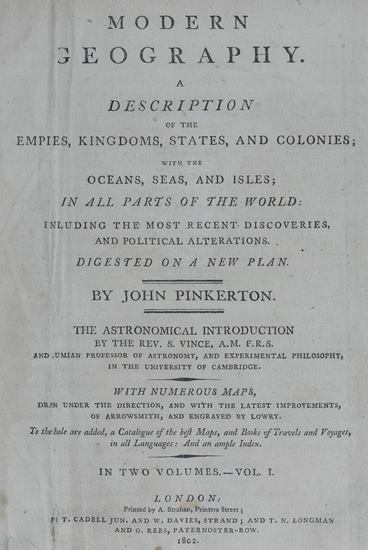 Pinkerton’s encyclopedic approach to “modern geography,” his stated topic, includes “a description of the empires, kingdoms, states, and colonies; with the oceans, seas, and isles; in all parts of the world: including the most recent discoveries, and political alterations” in addition to an extensive introduction describing the solar system. Although Pinkerton provides a broad range of information, he is at times dismissive of his subjects and only offers a cursory understanding of them. Discussing the western coast of Africa, he writes:

On this side of Africa, so far as hitherto explored, are innumerable tribes, as little meriting particular description as those of America. The Jalofs or Yolofs and Foulahs are the chief races on the rivers Senegal and Gambia; while Guinea, divided into the Grain or more properly Windward coast, Ivory coast, and Gold coast, chiefly supplies slaves, a trade which commenced in 1517 by a patent from the emperor Charles V, obtained at the instance of Las Casas, the noted protector of the American savages! Hawkins, the great navigator, was the first Englishman engaged in this commerce. The settlements in Guinea are chiefly Portuguese; and the slaves from the river Senegal are called Mandingos, from an inland country of that name; whilst those from the gold coast are called Koromantees; and those towards Benin Eboes. For these slaves British goods have been exported to the annual value of 800,000 £. 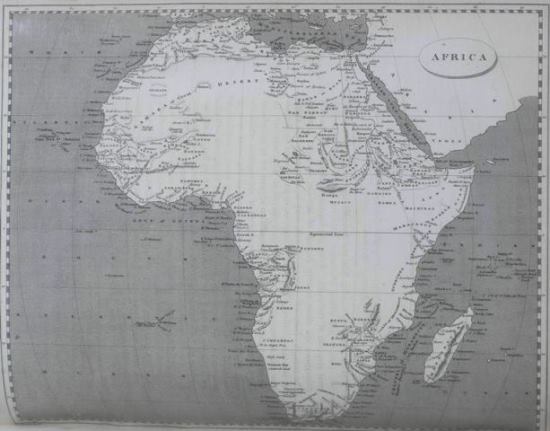 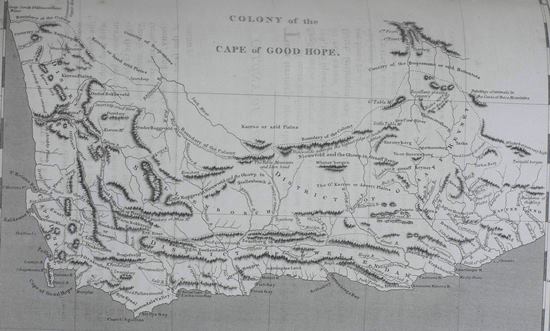 Researches in South Africa; Illustrating the Civil, Moral, and Religious Condition of the Native Tribes (1828) 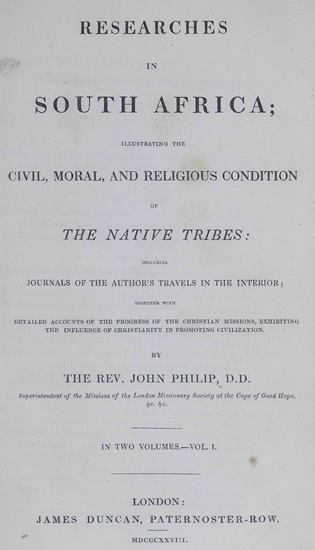 John Philip was born in Scotland in 1775. He attended the Wesleyan theological college in London and, in 1804, was appointed minster of the Congregational chapel in Aberdeen, Scotland. In 1818, Philip joined a delegation to investigate the possible closure of the London Missionary Society’s stations in South Africa. Four years later, in 1822, the Society’s missions not only remained open but appointed Philip their superintendent. When he returned to England he argued for recognizing the civil rights of South Africa’s indigenous peoples. By 1828 his recommendations were codified in an ordinance granting all free persons at the Cape the same rights enjoyed by British subjects.

Introducing this work, Philip describes the role of the missionary:

If there be any truth in the remark of Dean Swift, that the man who makes three blades of grass grow where only two grew before deserves well of his country, the faithful and able missionary may be allowed to occupy a chief seat among the friends and benefactors of the human race. His labors smooth the way for the triumph of science; increase the produce of the earth, by multiplying the hands employed in its cultivation; and create new demands for the manufacturers of his own country, while he is lessening the miseries of his fellow-creatures, elevating savages and barbarians to a state of civilization, and cheering them with the hope of a life to come.

Later he writes about the mistreatment of the indigenous people by the Boers:

In their hunting parties, or when travelling across the country for pleasure or on business, the boors massacred these natives as game or as noxious animals; and it is not improbable, that the numbers killed by the regular commandoes fall short of those murdered by private individuals. “A farmer,” says Barrow in 1797, “thinks he cannot proclaim a more meritorious action than the murder of one of these people. A boor from Graaff-Reinet, being asked in the Secretary’s office a few days before we left town, if the savages were numerous or troublesome on the road, replied, ‘he had only shot four,’ with as much composure and indifference as if he had been speaking of four partridges. I myself have heard one of the humane colonists boast of having destroyed, with his own hands, near three hundred of these unfortunate wretches.” 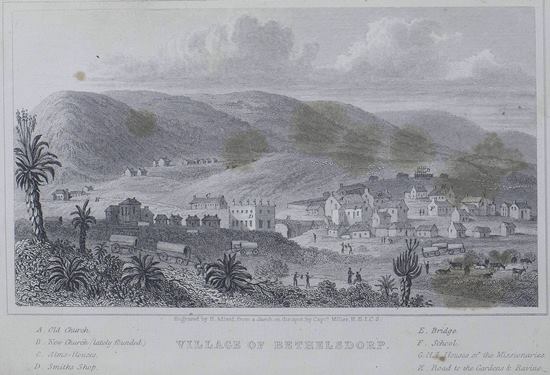 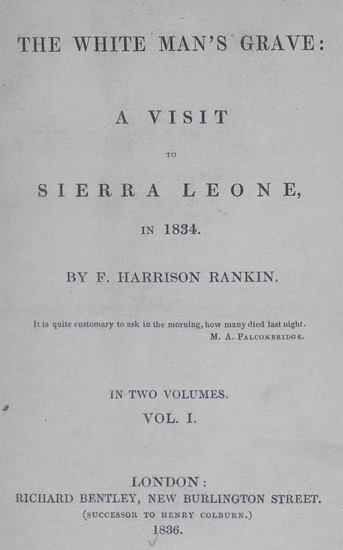 F. Harrison Rankin’s travel guide offers an exciting view of Sierra Leone in the 1830s. He covers a range of topics, from the state of the colony to perspectives on the church in Freetown to the manners and customs of the area’s peoples.

On the condition of the colony, Rankin writes:

There exists an analogy between colonies and caterpillars, less obvious perhaps than that which Maltebrun assumes between man and the hog, but not less true. Leaving each who reads to discover it, he is to be informed that Sierra Leone is now in its second stage of improvement towards the gorgeous perfection of the butterfly; rather torpid, perhaps, but not on that account less like the chrysalis.

And on the capital city’s primary place of worship, he says:

…the Church stands foremost, if it yet stands at all, in importance and interest. It is hailed by the distant voyager as nearly the only Christian temple upon the coast; for I am given to understand that there is none at the British settlement on the Gambia. It is a sataka [Devil-temple] to the savage Satan-worshipping Bullom; a stumbling-block to the contemptuous Mussulman; a sanctuary to the matrimonially-disposed cannibal; a rough ashlar to colonial masons; a hobby of successive governors; and an item in the national expenditure of 80,000 £.

Rankin also writes about local customs and the slave trade:

Mahometan residents live without visible means of support; they are avaricious, cunning, unscrupulous; and the slave system being legal in their own land, does not wear a criminal character in their morality. They contrive to mingle much with the most ignorant and barbarous of the newly imported captives, and, as elsewhere, acquire an influence leading to mastery. By the blacks of Freetown they are uniformly considered as speculators in human flesh. 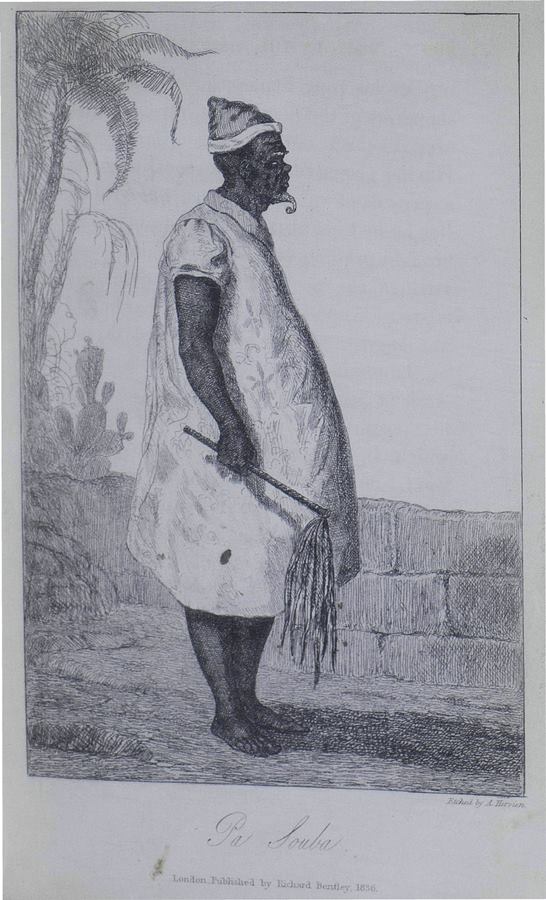 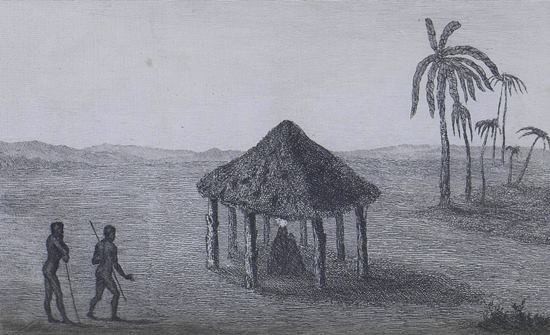 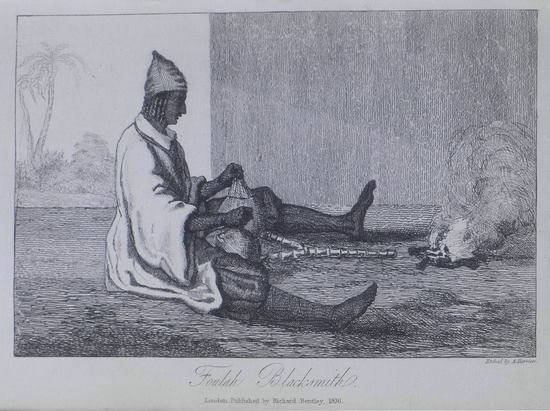