Etaoin and Other Shrdlu in the News 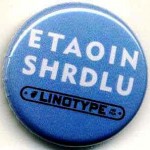 LINOTYPE: THE FILM, a new documentary by Doug Wilson, is now being screened across the U.S.

The word Etaoin, which looks a bit like a strange name, appears many times in 19th and 20th century newspapers. This Etaoin was no relation to the virgin St. Etaoin, who lived near the Boyle and Shannon Rivers in western Ireland and whose feast—today a little remembered fact—was celebrated by medieval Irish Catholics on July 5 according to the Martyrology of Donegal. No, our Etaoin first appears in print, mainly but not exclusively in newspapers, after the introduction of the Linotype machine. Etaoin, sometimes found with the apparent surname of Shrdlu, was in fact the Linotype’s equivalent of the block-and-delete function in contemporary word processing programs except that the block, a block of solid type in fact, was often not deleted. Here is how Etaoin was born; but first a necessary word about the Linotype machine itself. 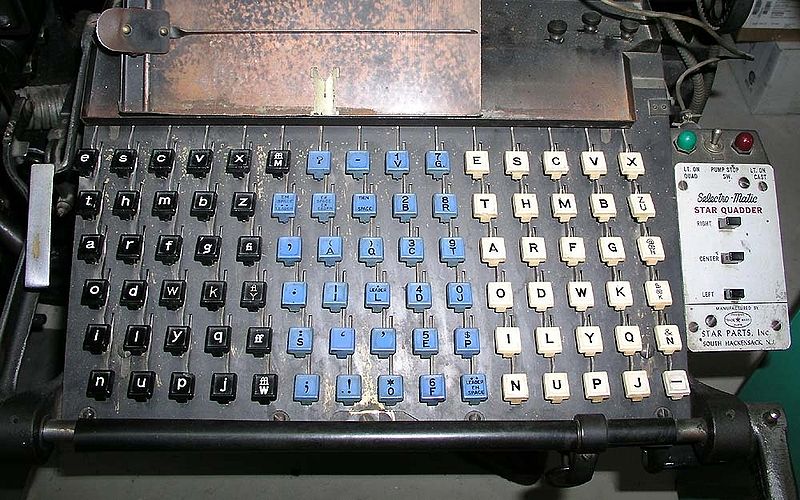 A Linotype keyboard. Keys are arranged by order of frequency as they appear in the English language. Upper and lower case letters have separate keys.

The Linotype, an American invention of German immigrant Ottmar Mergenthaler (1854–1899) in Baltimore, was a machine which cast a whole line of type in one action. From the days of Gutenberg and his predecessors, type had been laboriously set by hand—a slow, extremely labor-intensive, and expensive practice. The Linotype machine, more than anything else, is responsible for the enormous growth of not only newspaper publishing but all forms of publishing in the United States and throughout the world in the last decades of the 19th century. Here is a brief description of the Linotype itself:

As the name implies, the Linotype is a machine that produces a solid “line of type.” Introduced about 1886, it was used for generations by newspapers and general printers. It is a one-man machine: the operator sits in front with the copy to be set at the top of the keyboard. Having adjusted the machine for the required point size and line length, the metal heated to the correct temperature—about 550 degrees Fahrenheit—he commences setting. A light press of the key buttons actuates a mechanism that releases the matrices. These are small pieces of brass in which the characters or dies are stamped. The matrices travel from the magazine channels where they are housed, by means of a miniature conveyor belt, into the assembler box. This assembler box is the composing stick of the Linotype. After each word the operator touches the spaceband key which allows a spaceband to fall before setting the first letter of the following word. These spacebands are steel wedges and are used to spread out the line of matrices to the required width. When these spacebands have entered the assembler they are so positioned that their minimum width is between the matrices. When the assembler is nearly full of matrices, the operator must decide whether to send the line away for casting at the finished words; or, if the [line] is long and obviously will not come in the measure, just where to divide it. As these decisions are made very speedily, it is necessary for the operator to be expert in the correct dividing of words, otherwise corrections necessitating the re-setting of two or more new lines will have to be made at a later stage. (http://www.woodsidepress.com/LINOTYPE.HTML)

It took years for Linotype operators to become proficient but because of the speed at which they worked, errors sometimes crept in. Enter Etaoian. From Wikipedia, the free encyclopedia:

ETAOIN SHRDLU (English pronunciation: /ˈɛtiˌɔɪn ˈʃɜrdlu/) is a nonsense phrase that sometimes appeared in print in the days of “hot type” publishing because of a custom of Linotype machine operators. It appeared frequently enough that it became part of the lore of newspapers. A documentary about the last issue of The New York Times to be composed in the hot-metal printing process (2 July 1978) was titled Farewell, Etaoin Shrdlu.  The letters on Linotype keyboards were arranged by letter frequency, so “etaoin shrdlu” were the first two vertical columns on the left side of the keyboard. Linotype operators who had made a typing error could not go back to delete it, and had to finish the line before they could eject the slug and re-key a new one. Since the line with the error would be discarded and hence its contents did not matter, the quickest way to finish the line was to run a finger down the keys —a “run down,” as it was termed—creating this nonsense phrase. If the slug with the error made it as far as the compositors, the distinctive set of letters served to quickly identify it for removal. Occasionally, however, the phrase would be overlooked and be printed erroneously. This happened often enough for ETAOIN SHRDLU to be listed in the Oxford English Dictionary and in the Random House Webster's Unabridged Dictionary.

And here is one of the earliest examples of Etaoin in America’s Historical Newspapers—currently there are some 1,817 instances:

The worthy St. Etoian, however, got there [i.e., into the Readex digitized newspapers] first on Oct. 14, 1876 in the Irish American Weekly, thus antedating the invention of the Linotype machine by almost a decade: 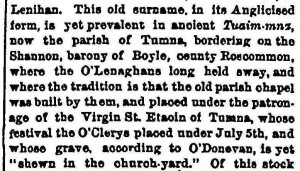 And the good Shrdlu may be found, as of today, some 2,416 times in the Readex digital collection of American newspapers. Here is one example from the March 23, 1894 issue of the New York Tribune:

Finally, an article by columnist John Barnes in the Augusta Chronicle of June 24, 1979, reminded readers of the sad fate of etoian shrdlu.

There are, needless to say, modern day counterparts to etoian shrdlu in our digital world, but that is another ETOAIN SHRDLU story.