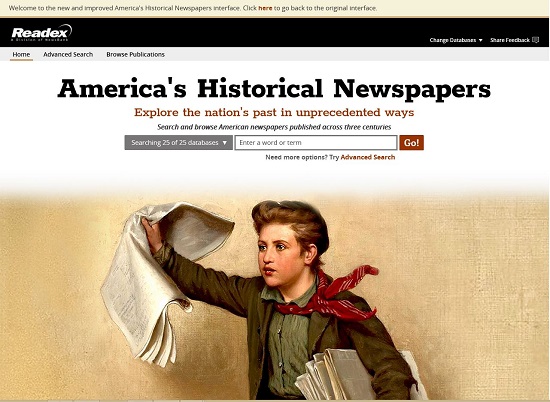 Boni’s purpose: Create surrogates of American historical documents, first to ensure their preservation, and second to enable wide access to the raw materials that document the American journey.

A decade later, in 1955, the American Antiquarian Society invited Readex to publish in microprint form Early American Imprints, Series I: Evans, 1639-1800. Suddenly the near-entire corpus of the earliest American books could be accessed in libraries across the United States and the world.

Over the years more books would be discovered and added to the “Evans” collection—a quest that continues even today.

The success of this partnership led to the microform publication of Early American Imprints, Series II: Shaw-Shoemaker, 1801-1819, and Early American Newspapers , Series 1, 1690-1876. 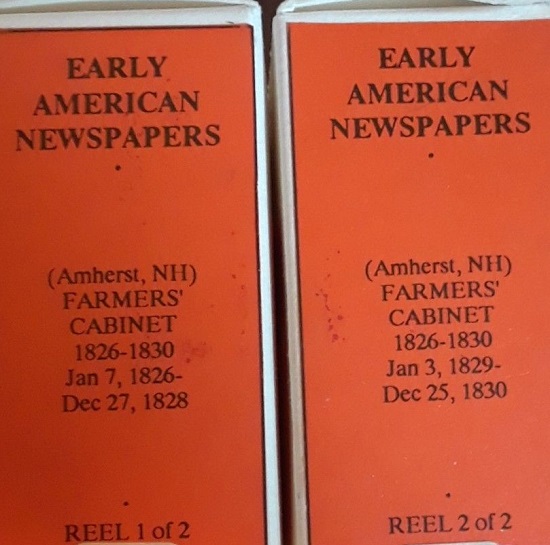 For scholars and students, the impact was enormous. For the first time, a vast and deep collection of early American printed documents could be accessed from “anywhere” (as long as “anywhere” meant a library that owned the collections). Almost immediately, scholarship was transformed by new discoveries and an explosion of interest in early Americana.

In the early 2000s these collections became available in searchable digital editions as part of the Web-based Archive of Americana. Now researchers could truly access the materials from “anywhere” a computer could operate.

A new kind of transformation began. Countless works could be searched, studied, and interrogated at the same time using “search and retrieve” interfaces (of course, microprint and microfilm can only be read, not “searched”). Using the collections in digital form, scholars revisited long-accepted conclusions.

Inevitably, old ideas were challenged by new ones—the very purpose of scholarship itself.

Acceptance was immediate. Suddenly newspapers—which because of their complex structure had been more difficult to use in film format than books—became very easy to use, thanks to solid, basic software that provided search-and-retrieve tools driven by expertly developed bibliographical data.

As the program grew, so too did our customer base and our user community, and their needs evolved in tandem. It was no longer okay just to search and retrieve. More capabilities and tools were needed—indeed demanded—so scholars and students could do their work smartly and efficiently. We delivered these tools incrementally, as needed, but never as part of a complete overhaul of America’s Historical Newspapers and other newspaper databases.

That is, until now.

“Smartly” and “efficiently”—these are the reasons Readex has just now re-built America’s Historical Newspapers from the ground up. We are partnering with users to support their work and to make all of our historical newspapers a seamless and integral part of their scholarly workflow.

How does this look in the new interface? In two words: Very Contemporary.

For example, instead of the old model with numerous tabs on the home page that govern and control the entire search experience, we have moved the tab functions (like selecting date ranges; viewing source lists; searching by a geographical location) to the places where users actually value them!

Here’s a look at “before,” showing a portion of the home page with many crucial tools all bundled together, where (we learned) they tend to confuse users:

Now, the “tab functionalities” showing in the image above have been relocated to places where users need them most.

Here is the new “Browse Publications” tool, which replaces the “Newspaper Titles” tab. It stands alone yet integrates, as needed, with the entire user workflow: 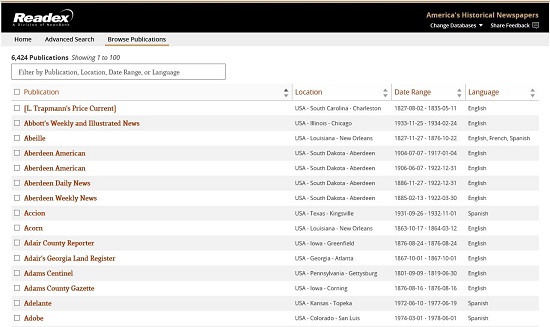 In the next example—the new Map Search—users can interact with a map that lets them drill up, drill down, and filter and limit based on specific needs: 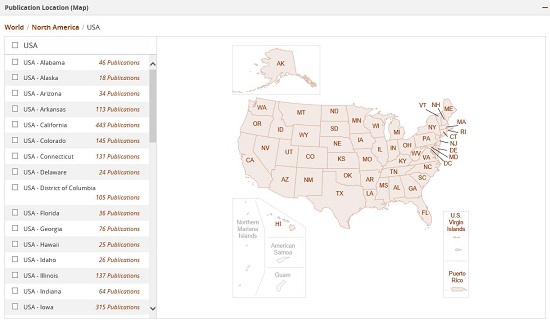 Important: We didn’t take anything away, we just made everything easier. This creates greater clarity for users, much less confusion, and far better search results. It also saves users a lot of time and makes the overall experience more enjoyable and more rewarding.

Another example: I mentioned already that we didn’t take anything away—which is important (users don’t like to say goodbye to things they like). But that’s only half of the story. We also added new tools and functions, and we positioned them where users need them most.

Database selection is at once simpler and more powerful, with greater decision-driving information to be found at the point of need. Similarly, our citation tools have been upgraded so users may create and export bibliographical citations in every major format.

The following image shows the new “database selection” tool, which helps users understand and evaluate—their content options better than before. Result: More targeted decisions about what to search and what not to search. 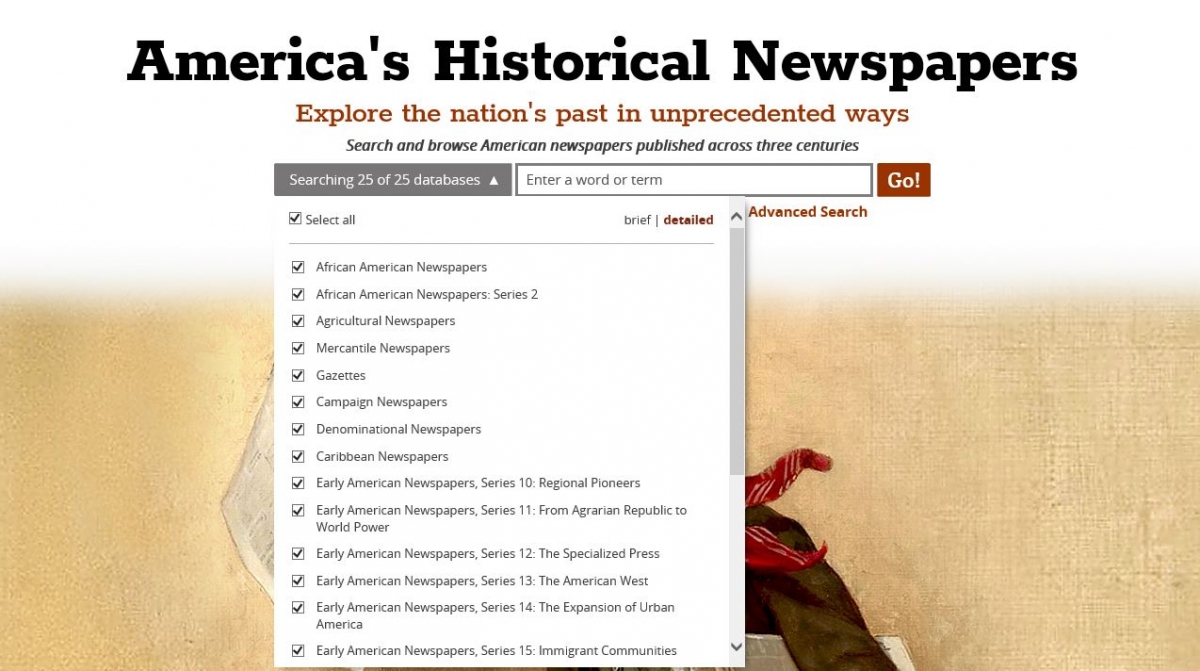 And there’s more! We have made significant improvements to the Results Page (see the new navigators on the left in the image below) and made it easier to select the number of results desired and to refine your search without returning to the initial search page. 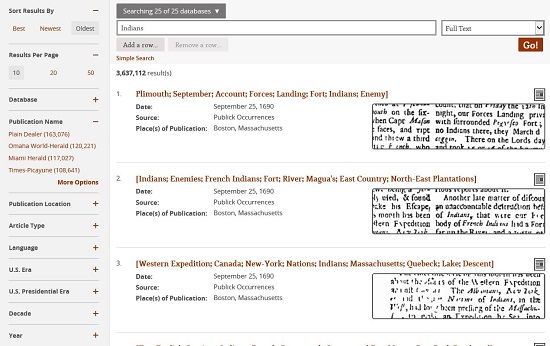 Coming later in 2019 are major upgrades to image viewing, metadata management, and more.

Bottom line: The “old” America’s Historical Newspapers interface does indeed look old compared to the new one, which is brighter, more intuitive, and more powerful than ever before.

I have saved the best for last. The new interface is also much, much faster than the old one. It searches faster; it retrieves faster; and it loads images faster. A huge amount of behind-the-scenes engineering made this possible.

Early reviews of the new user experience from some of our most active customers have included expressions like “a huge improvement” and (to quote the above again because I am so proud of it) “much, much faster.”

A faster interface means more work gets done in a shorter amount of time. It also means that users stay engaged, stay in control, and come away happy and satisfied.

The latter (happy and satisfied) is in my view perhaps the greatest objective of all.