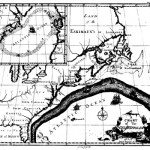 Many of us have read about Benjamin Franklin’s scientific work with electricity, but few know that this Renaissance man is also responsible for a groundbreaking study of the Gulf Stream current. On June 9, 2010, the following was posted by Ed Redmond (Geography and Map Reference Specialist at the Library of Congress) on MAPS-L listserv:

“With all the sad happenings in the Gulf of Mexico, there are a plethora of contemporary maps depicting the forecasted extent of the ‘event.’  "A historic map related to the Gulf that some may not be aware of is Benjamin Franklin's 1768 map of the Gulf Stream which can be found on the Library of Congress web site via: http://hdl.loc.gov/loc.gmd/g9112g.ct000753. “Franklin's 1768 map can also be seen next to a modern map depicting the approximate flow of the Gulf current around the Florida peninsula via the Library's "Places in The News" website: http://www.loc.gov/today/placesinthenews/. “Benjamin Franklin (1706–1790), one of America's founding fathers, is credited with the discovery of the Gulf Stream, a strong ocean current which flows north from the Gulf of Mexico along the Atlantic coast of the United States, where it joins the Labrador Current and flows eastward. In 1768 Benjamin Franklin and Timothy Folger produced the first map depicting the Gulf Stream which was published the English firm of Mount and Page. The Library of Congress holds one of the three extant copies of this very rare map." 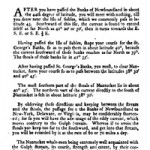 A variation of the Franklin-Folger chart of the Gulf Stream later appeared in a number of publications, including Maritime Observations: In a Letter from Doctor Franklin to Mr. Alphonsus LeRoy (Philadelphia: Printed by Robert Aitken, 1786).  The map was engraved by James Poupard and is preceded by a one-page description, “Remarks Upon the Navigation from Newfoundland To New-York In order to avoid the GULPH STREAM.”

These remarks (sans the map) were later published in the October 11, 1790 issue of the Boston Gazette, and the Country Journal. The mapping of the Gulf Stream in the eighteenth century was a significant event for mariners around the world.  Today, as oil in the Gulf of Mexico continues to leak, millions of Americans have a new awareness of the Gulf Stream’s flow.  In a worst-case scenario, its powerful current could bring oil around Florida, up the Atlantic coast, and beyond.