On Nov. 7, 1916, the U.S. Congress—and the entire nation—forever changed when Montana’s Jeannette Rankin became the first woman elected to Congress, winning a seat in the House of Representatives. Women at that time did not have universal suffrage—the 19th Amendment, granting all American women the right to vote, was passed by Congress in 1919 but did not become law until it was ratified on Aug. 26, 1920. 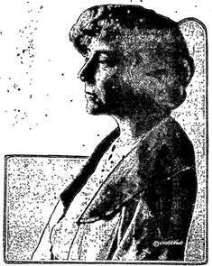 The following news reports, notices and editorials give a range of reactions to Rankin’s historic election. Some of the articles are laudatory, but others have a snide undercurrent running through them. None has got her age quite right: she was 36 when she was elected to Congress.

This article was published by the Boston Journal (Boston, Massachusetts) on Nov. 10, 1916:

Woman Elected to Congress Is a Vassar Girl

Congresswoman Rankin of Montana Girlish and Gentle of Mien

Won Her State for Suffrage

Congresswoman Jeannette Rankin, spinster, attorney at law and the first woman elected to the national Legislature, has been for the last seven years a power in the affairs at Montana, which State she probably will represent in the Lower House of Congress in the next term. Her election seems assured.

Miss Rankin and her brother, J. Wellington Rankin, neither of whom is yet 30 years old, went West about 10 years ago and made their home in Montana. He is a graduate of Cornell and his brilliant sister, two years younger—she is 28—is a graduate of Vassar and of the law school of the University of Montana at Missoula.

Upon leaving the University of the Treasure State, Miss Rankin took up the practice of law in the little mountain town of Missoula, where her power as an orator and her persistent participation in politics won attention all over the West.

She quickly enlisted in the suffrage movement in her own State and was chosen to represent Montana in the national committee of the organization. Through her efforts the State suffrage question was brought before two assemblies of the Montana State Legislature, where in joint assembly senators and representatives made a travesty of her appeal and laughed her out of the Senate chamber.

Far from discouraged, she then commenced a campaign among voters of all parties to have the question of suffrage placed on both tickets, and in the referendum election which followed Montana was swept into the ranks of suffrage States. Miss Rankin immediately grew into a national figure in the affairs of women, and for the two past years has been conspicuous in the councils and demonstrations of the national organization.

The first American congresswoman is a slender, girlish, comely gray-eyed young woman, as feminine of deportment and as gentle of mien as one could wish for in his own sister or sweetheart. On the rostrum her manner, appearance and method of forceful but quiet utterance remind one of Maude Adams, for there is nothing raucous, obtrusive or masculine about the calm confidence and captivating rationality of Jeannette Rankin’s speeches or manner of public appeal.

The sophisticated and political[ly] wise members of the next Congress will find no parliamentary gaucheries or unethical impertinence in the behavior of Miss Rankin in the hallowed halls of Congress. She has been a delegate to a dozen State and national conventions, she is an adept parliamentarian, a shrewd debater, a logical and eloquent conversationalist, and, withal, a woman of much dignity and rare scholarship.

This editorial was published by the New York Sun and reprinted by the Aberdeen Sunday American (Aberdeen, South Dakota) on Nov. 7, 1916:

Lady from Montana Subject of Editorial

Under the caption, “The Lady From Montana,” the New York Sun of Oct. 16 makes reference on its editorial page to the candidacy of Miss Jeannette Rankin. The Sun’s editorial follows:

“It is said that Miss Jeannette Rankin, Republican, described as tall and with a wealth of red hair, and as in her early thirties, is sure of election to the House of Representatives from Montana. If that proves to be the case either Jack Evans, with two children, [or] Tom Stout, with three, both Democrats, will have to go. As they were elected (at large) by pluralities of about 10,000 two years ago, all the Montana women apparently will have to vote for the lady with the Titian tresses is she is to take her seat in the House with 439 more men.

“The House, of course, will not look the same, or behave just as it has in the past when the Hon. Jeannette Rankin writes M.C. after her name. Members will have to consider her presence and govern themselves accordingly. There can be no ‘hurling the lie’ anymore and, of course, no throwing of inkstands and fisticuffs. Parliamentary language will take on a finer polish. We can face Uncle Joe Cannon of Danville preening himself and furtively consulting a hand mirror. Profanity will become a lost art in the lobby. The improvement in the vernacular of members will be revolutionary. They will all speak in prose when Representative Jeannette Rankin is in their vicinity. We suppose that she will wear a becoming hat and sometimes carry a bouquet—perhaps always have a nosegay in a vase on her desk. We shall expect to see the House look like a bower of posies when she sets the fashion. She will have 439 guides to procedure and practice; yet it will require some tact on the part of the Speaker to recognize the lady from Montana when she wants the floor. She will be a problem in diverse ways, but she will provide a good deal of light, color and atmosphere to a legislative body that will be all the better for it.

“Representative Jeannette Rankin will be a popular member no doubt, and if she is joined in the House by others of her sex of equal attractions Cupid may as well be made a page with a quiver full of darts.”

This notice was published by the Anaconda Standard (Anaconda, Montana) on Nov. 11, 1916:

Jeannette Rankin isn’t exactly an oily politician in the popular acceptation of the term, but, if we get her correctly, she’s a wise virgin, who intends never to let her stock of illuminants run so low that she can’t qualify as a bright and shining light of Congress.

This notice was published by the Charlotte Sunday Observer (Charlotte, North Carolina) on Nov. 12, 1916:

Miss Jeannette Rankin, the Republican candidate who was elected to Congress from a Montana district, is a North Carolina woman, of course, “small of stature and pretty as a peach.” All North Carolina female products are of that general descriptive character.

This notice was published by the Columbus Ledger (Columbus, Georgia) on Nov. 12, 1916:

Miss Jeannette Rankin goes to Congress from Montana. It makes little difference about the “petticoat,” but the woman is a full-fledged G.O.P.

This notice was published by the Aberdeen Daily News (Aberdeen, South Dakota) on Nov. 13, 1916:

It is said that Miss Congressman Rankin can “dance like a boarding school girl.” One may now look forward to a terpsichorean session in the lower and not always august body of Congress.

This editorial was published by the Philadelphia Inquirer (Philadelphia, Pennsylvania) on Nov. 13, 1916: 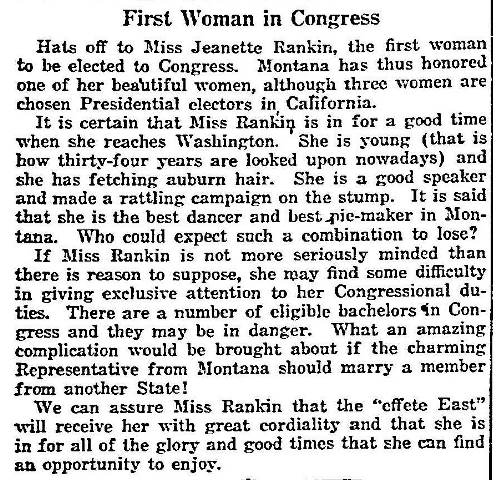 Hats off to Miss Jeannette Rankin, the first woman to be elected to Congress. Montana has thus honored one of her beautiful women, although three women are chosen Presidential electors in California.

It is certain that Miss Rankin is in for a good time when she reaches Washington. She is young (that is how thirty-four years are looked upon nowadays) and she has fetching auburn hair. She is a good speaker and made a rattling campaign on the stump. It is said that she is the best dancer and best pie-maker in Montana. Who could expect such a combination to lose?

If Miss Rankin is not more seriously minded than there is reason to suppose, she may find some difficulty in giving exclusive attention to her Congressional duties. There are a number of eligible bachelors in Congress and they may be in danger. What an amazing complication would be brought about if the charming Representative from Montana should marry a member from another State!

We can assure Miss Rankin that the “effete East” will receive her with great cordiality and that she is in for all of the glory and good times that she can find an opportunity to enjoy.

This column was published by the Cleveland Plain Dealer (Cleveland, Ohio) on Nov. 13, 1916: 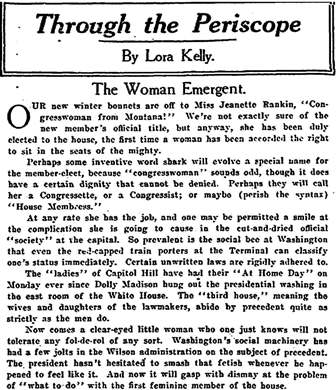 Our new winter bonnets are off to Miss Jeannette Rankin, “Congresswoman from Montana!” We’re not exactly sure of the new member’s official title, but anyway, she has been duly elected to the House, the first time a woman has been accorded the right to sit in the seats of the mighty.

Perhaps some inventive word shark will evolve a special name for the member-elect, because “congresswoman” sounds odd, though it does have a certain dignity that cannot be denied. Perhaps they will call her a Congressette, or a Congressist; or maybe (perish the syntax) “House Membress.”

At any rate she has the job, and one may be permitted a smile at the complication she is going to cause in the cut-and-dried official “society” at the capital. So prevalent is the social bee at Washington that even the red-capped train porters at the Terminal can classify one’s status immediately. Certain unwritten laws are rigidly adhered to.

The “ladies” of Capitol Hill have had their “At Home Day” on Monday ever since Dolly Madison hung out the presidential washing in the east room of the White House. The “third house,” meaning the wives and daughters of the lawmakers, abide by precedent quite as strictly as the men do.

Now comes a clear-eyed little woman who one just knows will not tolerate any fol-de-rol of any sort. Washington’s social machinery has had a few jolts in the Wilson administration on the subject of precedent. The President hasn’t hesitated to smash that fetish whenever he happened to feel like it. And now it will gasp with dismay at the problem of “what to do” with the first feminine member of the House.

All of the newspaper articles highlighted in this post can be found in America's Historical Newspapers. For more information about this Readex collection, or to request a trial for your institution, please contact readexmarketing@readex.com.