The derivation of the phrase “fish or cut bait” is relatively clear, but its meaning has been murky since it became popularized in the mid-nineteenth century. One interpretation is similar to a contemporary idiom more politely expressed as ‘evacuate or vacate the wash closet,’ urging one to either proceed or cease a course of action. Another reading of the expression is it is instructing one to choose between two actions required to attain a particular goal.

An April 30, 1897, New-York Tribune column encouraging Tammany Hall to take action on monetary policy illustrates both the phrase’s origin and that its common usage is incomplete. 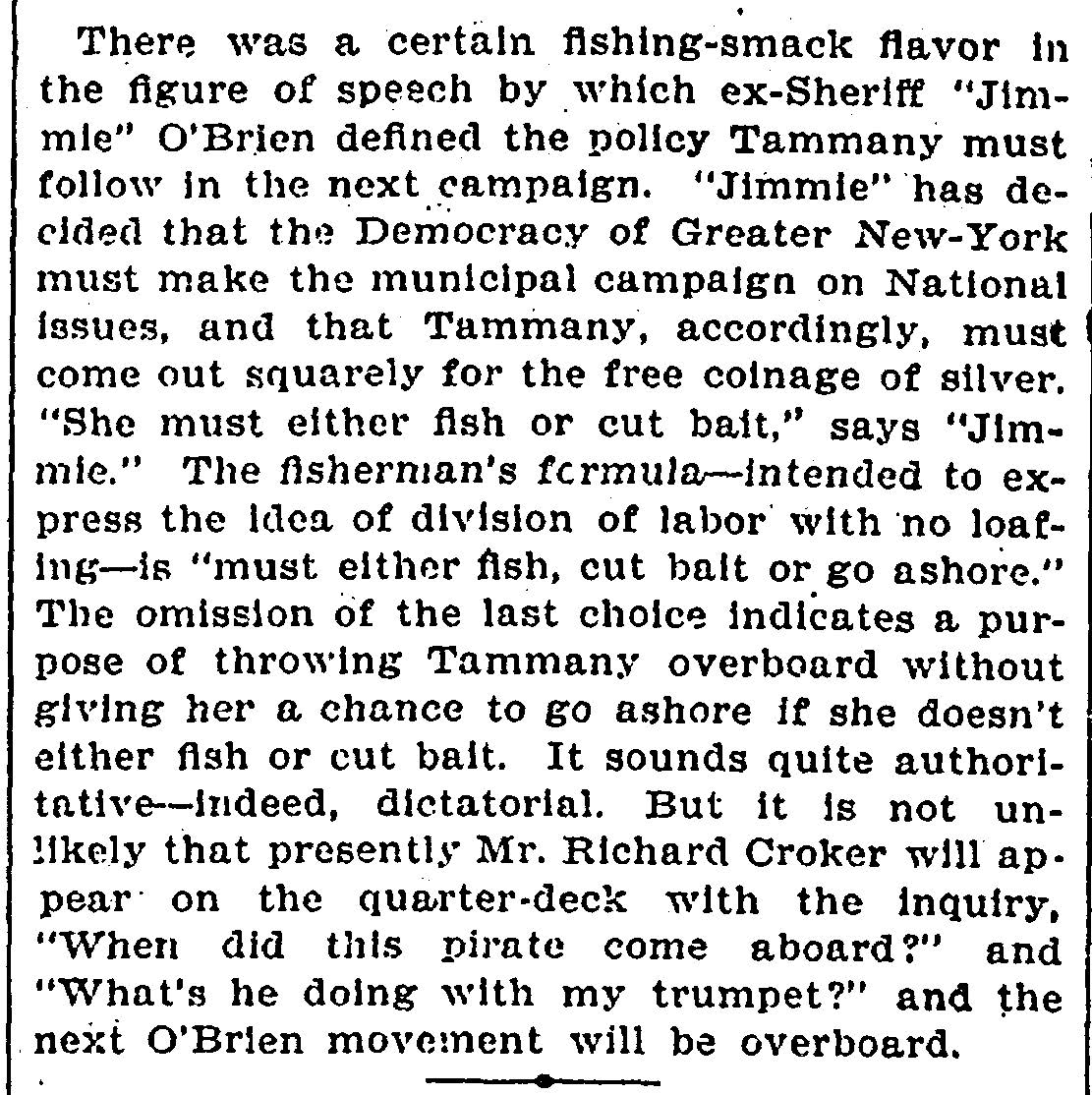 A Pawtucket Times article from March 24, 1920, describing a call to accomplish the multitude of tasks required to form a fish and game association, also interprets the phrase as a division of labor. 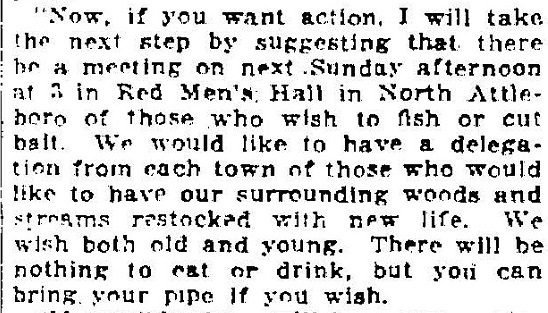 However, examples of the contemporary usage, to continue or cease an action, are more common and older than may be expected. An article in the Buffalo Morning Express from August 13, 1863, makes clear the Copperheads’ choice of supporting the Union or not.

They now begin to see that they must either fish or cut bait. They must either go or resist, and hence the existing unfortunate and unsettled condition of affairs. We have long looked to the draft for the means of bringing skulks and cowards from their lurking places, and we may well expect to hear them denounce the law under the promptings of a nature that has no spirit with which to defend the right, or avenge our national wrongs. 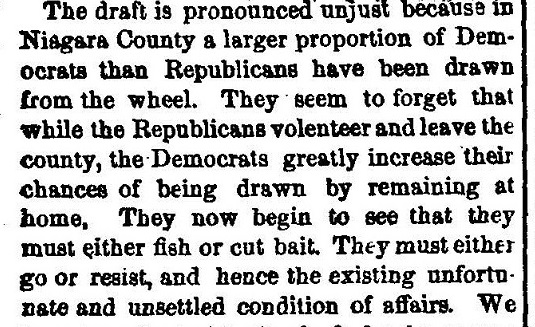 Expressing a similar message, but here directed at immigrants, this World War I-era poem, published in the August 10, 1917, issue of the San Jose Evening News, also uses the contemporary meaning:

(The following poem, evidently intended by the author to be an appeal to the foreigner within this country, is well written and seems very appropriate at this time when so many are claiming exemption from draft. The poem was turned in by a subscriber of The News):

Uncle Sam swung the gates to this land of the free

And welcomed you into the fold,

You came from the countries far over the sea

He gave you a harbor from kingcraft and power,

And gave you a freeman’s estate—

You either must fish or cut bait.

A January 10, 1903, article in the San Jose Evening News makes clever use of the phrase’s ambiguity, while describing ongoing diplomacy around a fishery agreement and the potential outcome should no consensus be reached.

It begins to look as though the United States would have to “fish or cut bait,” in the matter of adjusting our trade relations with Newfoundland. In other words, unless we adopt the pending treaty with Newfoundland there is danger that our New England fishermen will be cut off from their bait supply.

More than 600 articles with the phrase “fish or cut bait” appear in Early American Newspapers, Series 1-16, several as early as the 1850s, some of which predate a court case generally cited as having popularized the phrase. However, at times it is difficult to determine which interpretation is intended. It is unclear which meaning is to be inferred from this particularly early example, an unfortunate and slightly paranoid entry printed in the Cayuga Chief on June 11, 1850.

Having been gouged out of the Post Office advertising by a most unwarrantable decision here, we are led to wonder that we can get no return from the P.M. General. If there is a darkey in the fence, we hope to find him. If we have any right in this matter, we’ll have it or have fun enough to make it up. We know it’s hard for the political press to yield up a mouthful of pap, but it’s fish or cut bait. 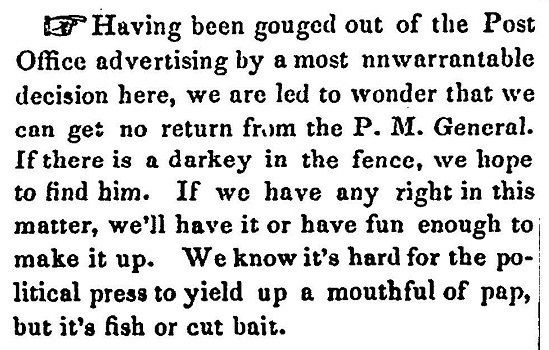