Pearl S. Buck inhabited many roles over the course of her life. Following the publication of her bestselling novel The Good Earth in 1931 she was widely known as a writer who crafted a compelling narrative of life in a Chinese village. After she won a Pulitzer Prize for that book in 1932, and the Nobel Prize for Literature in 1938, she was regarded as a celebrity and a public intellectual as well. 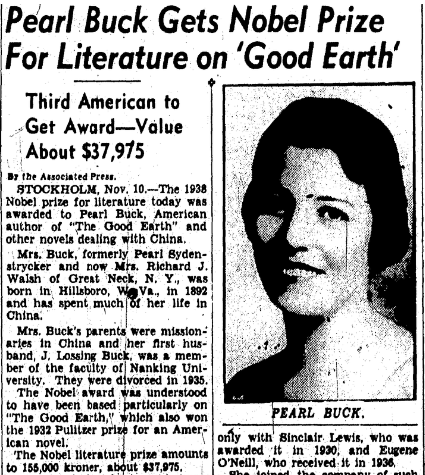 To many women she was a beacon of the equal rights movement; for many mixed-race children she was quite simply a savior. To the Chinese among whom she lived she was Sai Zhenzhu (賽珍珠, Chinese for “Precious Pearl”). The communists feared and hated her, but her reputation has since been reappraised and her homes in China are now tourist attractions.

The Washington Evening Star is an especially useful newspaper for tracing Buck’s life and influences. The span of its publication (1852-1981) complements the emergence of China onto the world stage, roughly from Commodore Matthew Perry’s naval expedition to the Far East (1853-4) to President Richard M. Nixon’s trip to China in 1972. For more than a century it was the major daily in America’s capital, and as such offers perspectives on Buck’s politics, her humanitarian work, her literary style, China’s estimation of her, and even had room for a few of her recipes which we’ll get to in a moment.

We’ll also dip into Foreign Broadcast Information Service (FBIS) Daily Reports, 1941-1996, Joint Publications Research Service (JPRS) Reports, 1957-1994, and the U.S. Congressional Serial Set, 1817-1994, as we follow the globe-trotting Buck around the world, and in and out of the public eye.

Before the fame and notoriety Buck was a Presbyterian missionary who came to believe in a more ecumenical creed. She attracted criticism for her unorthodox views, and eventually resigned from the Presbyterian Church.

Mrs. Buck recently expressed herself for a “creedless faith.” Criticizing some theological ideas as “superstition,” she also attacked some missionaries. She recently said: 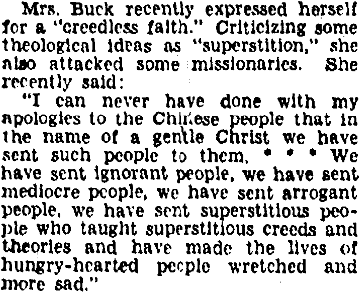 Pearl Sydenstricker was born in West Virginia in 1892 to missionary parents. She spent her childhood in Zhenjiang, Jiangsu Province, near Nanking, China, where she was homeschooled by her mother to be fluent and literate in both English and Chinese. She was raised to accept all people as equal in their humanity, but as she grew she became aware that this viewpoint was not universally applied.

In her youth she encountered stark examples of gender inequality in the remains of Chinese children, generally girls, who were left outside to die of exposure; she buried them as best she could. In the following excerpt she is perhaps too generous to the Chinese in implying that one could readily choose to behave as “superior people” regardless of one’s social or economic circumstances. Her observations on American gender equality seem more cogent by comparison—as seen below in excerpts found in the Washington Evening Star and the U.S. Congressional Serial Set:

The author of “The Good Earth” gave the Chinese mother’s injunction to her children, both boys and girls, as: “Behave thus because only thus do superior people behave.”

In this country, however, she said, advice to the boy is: “Behave like a brave man, not like a sissy girl.”

“The American girl then is guided away from the idea of sex equality by being told of her privileges as a woman,” Miss Buck added.

“Fortunately for women chivalry never reached China,” she declared. “She had the benefit of the discipline of work and no privileges.” 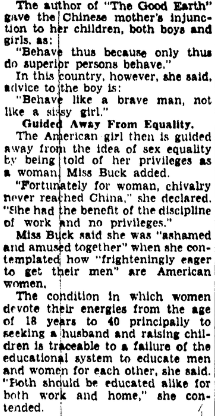 When one sex is given discrimination, either favorable or unfavorable, the effect works ill for everyone. If women do not have as a matter of course an unequivocally equal place with men before the law, men suffer with them.

She also remarked on the perception of racial differences, East and West:

The Chinese always picture villains as people with “blue eyes and light hair,” she said, just as our movie villains are often Oriental types. This leads to mutual suspicion and fear, she pointed out.

Miss Buck said that intellectuals of the East and West had come to learn much of each other’s culture and had a fine understanding. This same understanding does not obtain among the average peoples.

She discovered that unequal treatment was especially harsh for mixed-race children fathered by American military personnel serving in the Far East. In a lecture at Gallaudet University, her American Sign Language interpreter literally put her words into action:

They are the children nobody wants, the “Ameriasians” fathered by American servicemen and born out of wedlock to Asian women.

“All over Asia those half-American children are growing up ignorant and in criminal capacities,” she told a packed auditorium through simultaneous sign language translation by the Rev. Rudolph Gawlik, Gallaudet’s Catholic chaplain.

“And unless they are given some opportunities they will be a menace to America one day, for they are already being wooed by the Communists.”

But properly educated and accepted by the societies in which they live, Miss Buck believes these young outcasts could foster lasting understanding and trust between Asian countries and the West.

She graduated from Randolph-Macon Woman’s College with a degree in philosophy in 1914 and married John Lossing Buck, an agricultural economist. After their marriage the couple moved to Suzhou, Anhui Province, the landlocked area of eastern China that served as the inspiration for The Good Earth.

As she became famous and acquired the means to do so, she devoted much of her life to promoting the adoption and care of mixed-race children. In 1964 she created Pearl S. Buck International to improve the lives of such children. The foundation still exists and is based in Perkasie, Pennsylvania, where Buck once lived. 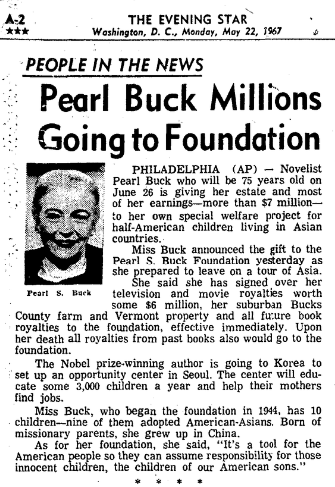 Because of her tenure in China and her progressive activism she was investigated by the FBI as being sympathetic to communism. She also came to the attention of the Special Committee on Un-American Activities: 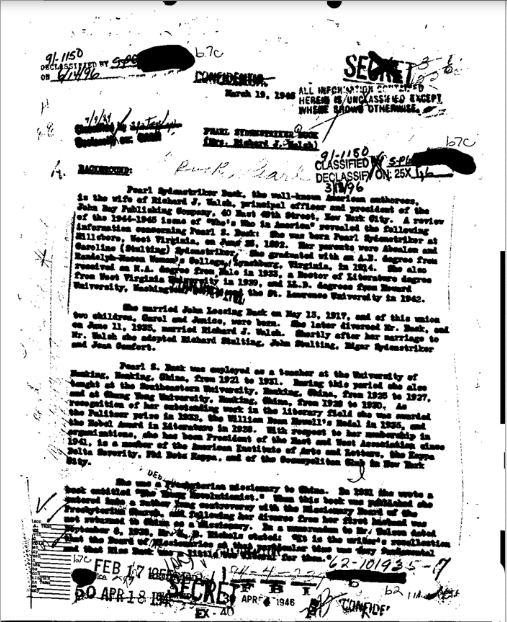 However, Buck was very clear in her view that communism was a system under which she could not live. In addition to anti-communist novels such as The Three Daughters of Madame Liang (1969), in a memoir published shortly before she died she described the effect that the coming of communism had on her writing and her perspective on that country:

“Abruptly,” she relates, “I ceased writing about China in 1951. Searching my files for this collection of speeches and essays about the country and people I knew so well, apparently I suddenly felt that I knew them no longer. There was change, and the change silenced my voice and stilled my pen. The change was of course the fact that what I had foreseen for so many years had finally happened. The Communists came in, and the Communists took over.” 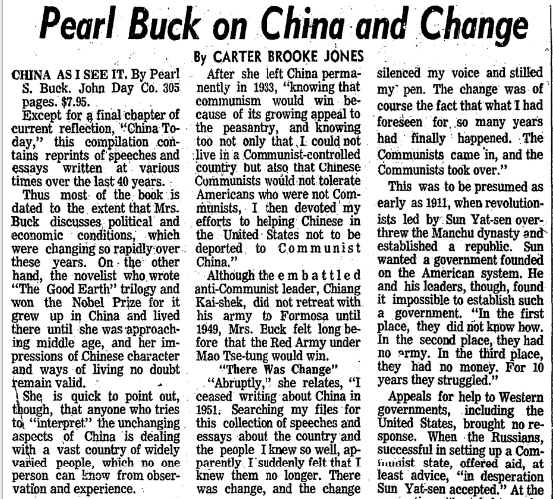 When Buck left China in 1934 due to political instability during the early stages of the Chinese Civil War, she planned on returning. But the communist government branded her as an imperialist and she was denied a visa as late as 1972. In this excerpt from a Chinese literary review, found in JPRS Reports, the author is much more intent on criticizing Buck’s politics than her literary style:

Even the field of literature and art has not been ignored by US imperialists. For many years, they have purposely brought up a number of jackal writers whom they have instigated to use every means to beautify the aggressive acts of US imperialism and to libel with their utmost effort the liberation movements of peoples in colonies and semi-colonies. Among these brazen writers, Pearl Buck is one of the most fierce and malicious. 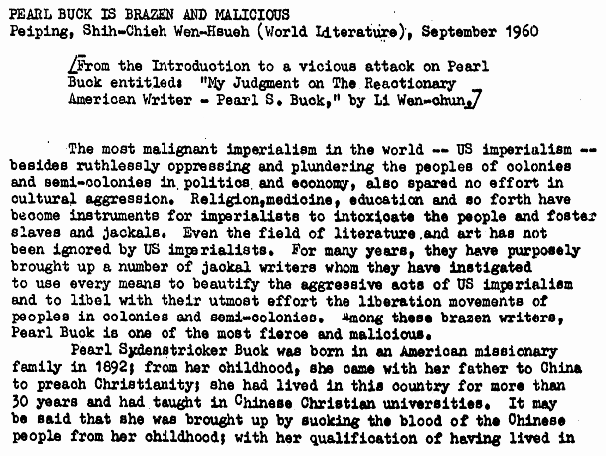 So while the American government thought she was a leftist radical, to Chinese communists she was a right-wing imperialist, whereas the Russians believed her to be not nearly radical or political enough:

However, there was always one big failing in Pearl Buck’s books. This was her attempt to ignore the tremendous political and social changes taking place in modern China. Mrs. Buck is not a progressive-minded individual. Her literary ability and gift of observation sometimes get the better of her prepossessions, and the truth of life prevails over her false political views. 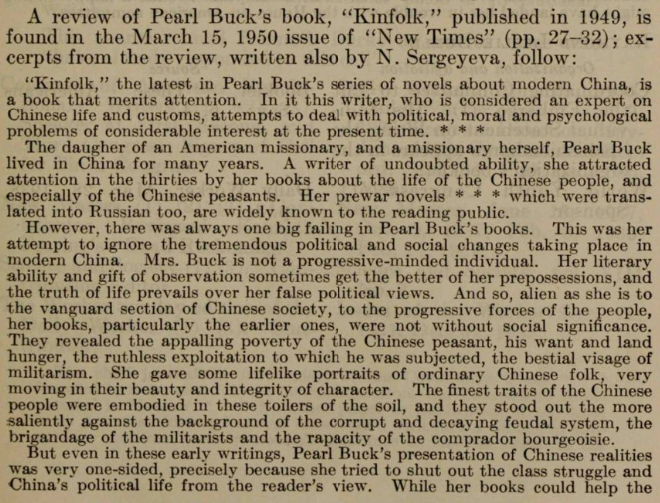 However her beliefs were misconstrued, her popularity and singular achievements outweighed any overt reservations the American political establishment may have held about her. She wrote prolifically, toured widely, sought to make a tangible contribution to society, and was not reluctant to speak her mind. 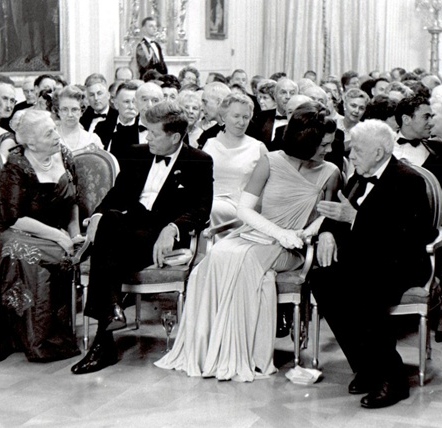 Thailand eventually came around to accepting Buck’s view that the “red-haired” (mixed-race) children needed to be accommodated in society rather than denied and cast off. They even went so far as to admit that in that regard the Pearl S. Buck Foundation was doing better work than their own government was: 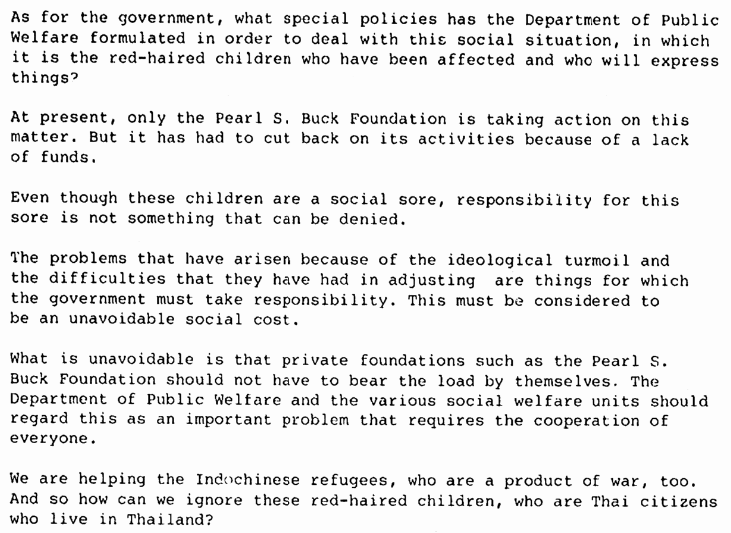 It would take the Chinese somewhat longer, however, to accept Buck herself as contributing meaningfully to the intellectual life of that country. The symposium noted below took place almost twenty years after Buck’s death, and avoiding outright slander of her was promoted as a sign of progress.

Xu Chi, vice-chairman of the Chinese Writers Association, said: “It is really commendable for Pearl Buck to fulfill those monumental works. If her works are not the acme of perfection, there’s nothing strange about it. Her limitations can be criticized. However, it is not allowed to viciously slander her. 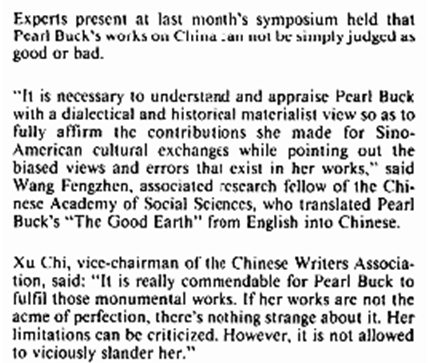 In her later years, following the death of her second husband, publisher Richard Walsh, Buck came under the influence of Theodore Harris, whom she met through his profession as a dance instructor. Although she consistently defended his reputation, it appears that Harris preyed upon her loneliness to wrest control of her finances and her charitable work, and isolate her from her children. Shortly after her death in 1973, a Vermont court determined that Harris had exercised undue influence over her affairs: 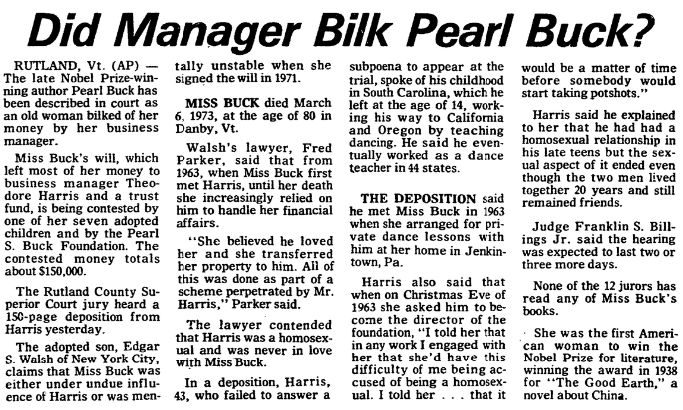 As an indication of Harris’s mismanagement of her professional life, Buck’s estate was in such disarray upon her death that some of her writings and files were stolen or lost, only to reappear years later.

In the essay excerpted below, written in 1970 shortly before her death in 1973, Buck guides the reader through her life and moral development. In large part it is a sober and somewhat disconsolate account of her self-conception as an American, likely due in part to the recent assassination of Robert Kennedy, and the ongoing Vietnam War. “I am friendly, but I no longer make friends,” she writes. “I listen, but I give no confidences. I appear when I must, but I live solitary. I count on no one... I cannot swear to my Asian friends that we are to be trusted.”

With that caveat as a prelude, she goes on to extol the simple goodness of those honest, hard-working people around her in Danby, Vermont, the village to which she retired. In doing so, she brings to mind similarly disposed Chinese people and persons she portrayed in The Good Earth:

But a people is not just a people. It is made up of individuals. People include persons.

They live in every city and town, in every village and countryside. They are the leaven which may... ah, let me say, will... keep alive through their very being, our great American ideals. 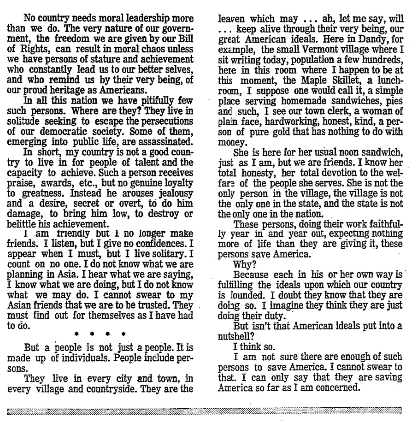 We come at last to a selection of Buck’s recipes from 1941: Peach Celestial, and Steamed Sponge Cake, among others. Like her writing, the desserts here transform a few simple ingredients into something sublime, even “celestial.” Bon appétit! 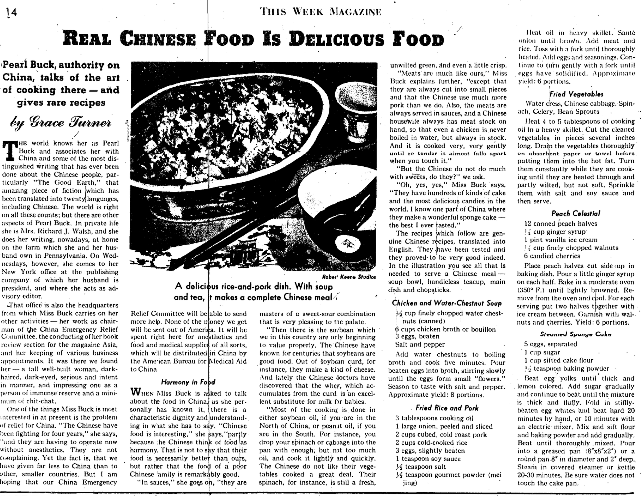