A Future That Never Arrived

Buried among the verbiage of a lengthy speech by Nikita Khrushchev from 1960 is a Communist Party plan that I’d never heard before – that the Soviet Union would abolish taxes on workers and employees by 1965, and also shorten their workday! It turns out this was a major Soviet domestic policy in 1960, worthy of headlines in the Trenton Evening Times, as can be seen from this page view. 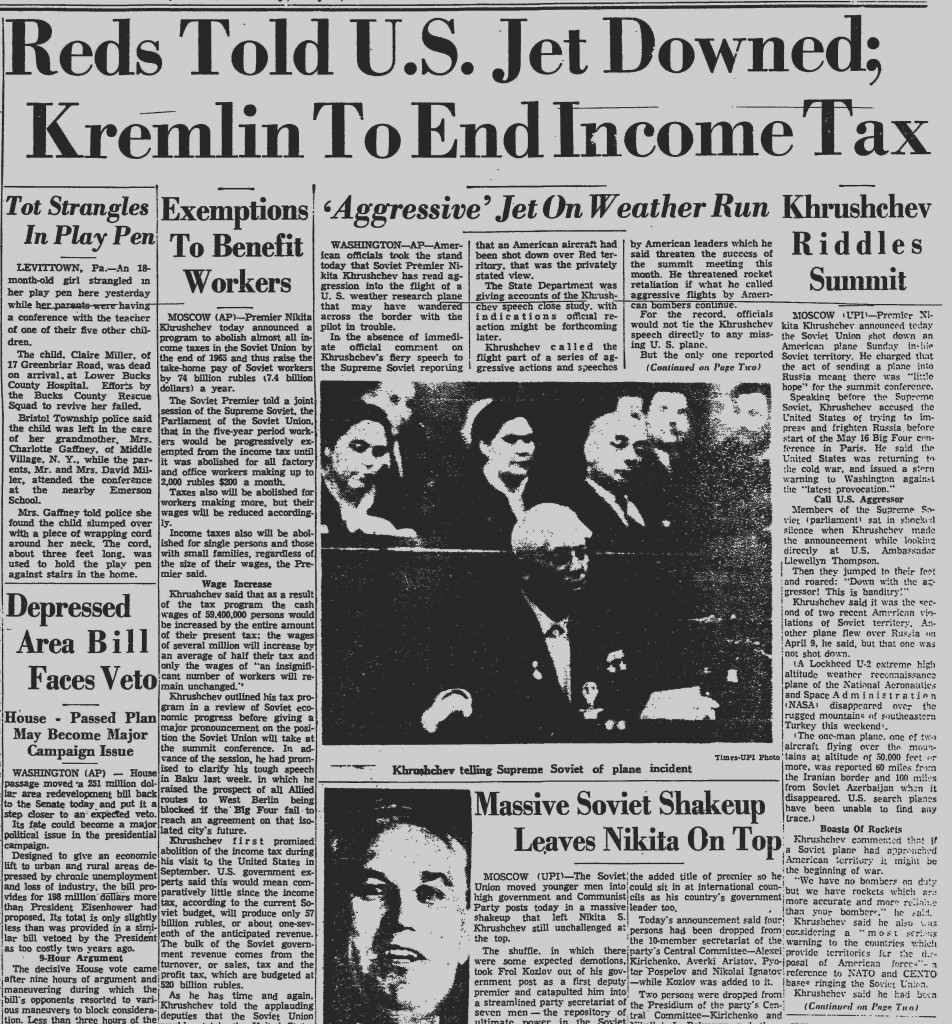 What can also be seen is that this announcement coincided with the shooting down of the CIA U-2 spy plane piloted by Gary Francis Powers. The plane’s downing led to the cancellation of the Paris Four Powers Summit, as President Eisenhower refused to apologize for violating Soviet air space. After these events, Khrushchev addressed the Third Congress of the Romanian Workers’ Party on June 21, 1960. He spoke at length – the speech runs over thirty pages in the June 22, 1960 Foreign Broadcast Information Service Daily Report. The following short excerpts give the flavor of his address and highlight the rhetoric of the time.

“I am happy that I have been entrusted…to transmit to you, and through you all communists, peasants, workers and intellectuals…warm fraternal greetings and best wishes for success at your congress.”

He had well wishes:

“Allow me, dear comrades, to wish the Rumanian Workers Party, workers class, and working peasantry, and the intelligentsia of the Rumanian People’s Republic success in implementation of your six-year plan, which will be a decisive phase in the grandiose plan for the final completion of the development of socialism in fraternal Rumania.”

He gave a history lesson:

“The natural resources of Rumania were plundered by imperialist powers which thought of it as their agrarian and raw material appendage. Such a situation apparently also fully suited the ruling group of bourgeois Boyar Rumania…”

“Capitalism is outliving its age. Insoluble contradictions are eating it away. The foundations of the old world are cracking and crumbling, and illusions about the solidity of the capitalist system are disappearing. The old girl groans, moans, and snaps, and everything goes wrong with her. As the saying goes: ‘For an old woman even a comfortable bed is full of lumps.’”

He praised new social initiatives in the USSR:

He praised the achievements of the Soviet Union:

“The peoples of the Soviet Union, now united and rallied as never before around the Communist Party, its Leninist Central Committee, and the Soviet Government, are fully determined to implement the plans of scientific communism and to erect the bright, majestic edifice of the communist society. Every day brings nearer that time when we shall be able to say that communism, like socialism today, has become an actual reality instead of a cherished aim.”

“Speaking figuratively, the successes of the socialist countries are like a multistage rocket, which will certainly lead the people of the whole world into the orbit of communism.”

He answered some criticism:

We’re less than half way through his speech at this point. He starts talking about the U-2 spy plane being shot down and the Paris talks being ruined:

“Now the people who wrecked the meeting are shedding crocodile tears. They are grieving as Judas grieved after betraying Christ. They crucified this meeting on the cross, and they now act as though the Soviet Union were the culprit… “The President announced cancellation of the flights at the preliminary meeting of the four heads of state in Paris. This was done approximately in this spirit: ‘I, Dwight Eisenhower, hereby condescend to do the following: Cancel spy flights over the Soviet Union.’ Judge for yourself. Is such a tone permissible for serious conversation with the representatives of a great and powerful socialist state?”

He muses on the present:

“We live at a time when we have neither Marx, nor Engels, nor Lenin with us. If we act like children, who in studying the alphabet build words out of letters, we shall not get very far….One must not only be able to read but must also correctly understand what one has read…”

He starts to sum up:

“The unity of the Marxist-Leninist parties is the guarantee of our future victories.”

“Long live and prosper the unity of the peoples of the socialist countries. Long live the solidarity of workers of all countries in their struggle for peace and friendship among peoples.”

And TASS goes on to remark:

“This message was received with great enthusiasm. All those present at the congress stood and rendered a loud ovation. Shouts hailing the CPSU and its Leninist Central Committee, the Soviet Union, the Rumanian Workers Party and its Central Committee, the fraternal friendship between the peoples of the Soviet Union and the Rumanian people, and all the fraternal socialist countries were heard in the hall.”

Although today it can be amusing to look back at the rhetoric employed by Khrushchev, this speech was given at a time when the U-2 incident and the breakdown of the Paris summit talks had further ratcheted up tensions between East and West. Khrushchev, who boasted of becoming the gravedigger of capitalism, was regarded seriously in Western capitals. The fact that he wasn’t successful doesn’t diminish the sincerity of the threat.