This is the time of year many St. Patrick’s Day celebrants literally go green, whether by donning green apparel, quaffing green beer, or just watching the flow of a local river temporarily dyed green. In 21st-century America, most people are reasonably sure the added color is harmless; however, in the 18th and 19th centuries beer drinkers had good reason for concern. While today’s large breweries assure customers their beer is made from only the finest ingredients, including water of unmatched purity, the use of pure or even clean water was not always the case. And in 1840 a New Yorker was sued for $300,000 for saying just that.

Edward Cornelius Delavan was a successful New York real estate speculator and wholesale wine merchant.  After retiring from selling wine, he became—ironically—a temperance advocate and harsh critic of commercial brewers and malters. In 1835, in an article published in the Albany Evening Journal, Delavan claimed eight of Albany’s malters were using water drawn from a pond in which a slaughterhouse and glue factory were dumping carcasses. 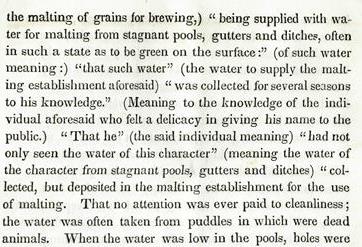 In an 1839 document found in American Pamphlets, 1820-1922, Delavan wrote that malters were “being supplied with water…from stagnant pools, gutters and ditches, often in such a state as to be green on the surface…” Continuing, he wrote “no attention was ever paid to cleanliness; the water was often taken from puddles in which were dead animals….in a state of putridity” and at times the water used was “nearly as thick as cream with filth.”

As wretched as was Delavan’s description of the water used by Albany malters, it was neither the first such warning nor the most foul. In 1791, Dr. John Budd delivered his Dissertation on Porter, found in Early American Imprints, 1639-1800, before the Medical Society of South Carolina, saying, in part: 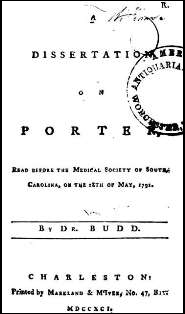 By porter, I mean, that vinous fermented liquor, made in London, of a particular kind of malt, with the Thames water. Was this porter made of good water, perhaps it would be equal to any beer in the world; but the Thames water taken up at the city of London, is a composition of all kinds of filth that the power of the human mind can conceive. Stinking meat and fish, with the blood and garbage from the butchers slaughter houses, kept till they are full of vermin; the carcasses of every species of dead animals; the saliva, dressings, and disagreeable matter from the hospitals and lungs of five or six thousand consumptive persons; the excrements from above a million of human beings, and perhaps twice that number of other animals, are discharged by a number of common sewers that run through the city into the Thames, and form this base composition, which permit me to call the essence of porter. Perhaps there may be some propriety in the name, as it is this filthy collection which gives the London porter the particular flavor that makes it so much admired by the lovers of that liquor.

Nearly 50 years after Dr. Budd’s dissertation on the essence of porter, and in the immediate aftermath of Delavan’s acquittal, American poet and temperance advocate John Pierpont celebrated Delavan and mocked the brewers in his poem “Lament of the Albany Brewers,” found in American Broadsides and Ephemera:

O fallacious hopes!
Now, every man who in the tap-room topes,
Nosing his tumbler’s cream, will ‘smell a rat’ in
Our pool, that had the ‘cream’ of many a cat in,
When that was drawn which he so long quaffed;
And, when he takes the ‘Journal’ up, with that in
About green gutter-wash,—the venomed shaft
Of Delavan!—we fear he may not ‘mend his draught.’

The poem—displayed in full below—was published with an accompanying picture sure to leave even Dr. Budd looking a little green. 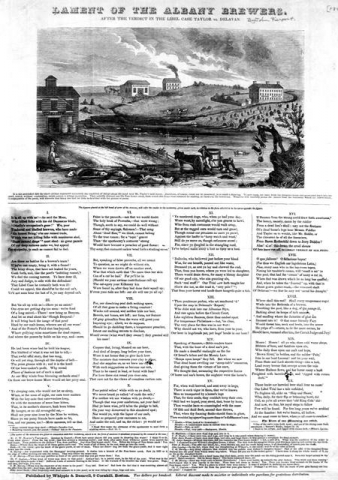 For more information about the Archive of Americana, or to request a trial for your institution, please contact readexmarketing@readex.com.

American Pamphlets from N-YHS, no. 8766
[Materials relating to the case of Ryckman v. Delevan, heard in the New York (State), Court for the Trial of Impeachments and the Correction of Errors] (1839)