Grace Halsell was a ghostwriter before she became a ghost. As a speechwriter for President Lyndon Johnson she was officially invisible; as an undercover journalist she later adopted a number of racial identities to become personally invisible. Some might go so far as to describe her as a Doppelganger who presumed to appropriate the social consciousness of marginalized people by inhabiting their stereotypical bodies.

For her 1969 book, Soul Sister, Halsell used medication and sustained tanning sessions to turn her white skin dark enough to pass as African American. When she wanted to explore life as a Navajo Indian she adopted the persona of real-life Bessie Yellowhair, dressed in layered cotton skirts, wore her hair in long braids and worked briefly as a domestic servant in California. For The Illegals she forded the Rio Grande River twice and dodged la migra while crossing on land from Tijuana, Mexico, to San Diego as a putative illegal immigrant.

Halsell was born in Lubbock, Texas, in 1923 to a prominent ranching family. She wrote for the Lubbock Avalanche-Journal, studied journalism at Texas Technical College and later at Columbia University in New York. She worked in the research department of the New York Times before becoming the police reporter for the Fort Worth Star-Telegram in 1945. After about a decade living and working abroad, she became the Washington, D.C., correspondent for the Houston Post where in 1965 she attracted the attention of fellow Texan Lyndon Johnson. She would spend three years working in the White House during Johnson’s presidency.

But even the rough-and-tumble of American presidential politics wasn’t enough; the peripatetic Halsell wanted more. By the time she died in 2000 she had “pulled Gs” in a fighter jet, pulled a rickshaw through the streets of Hong Kong, descended the Amazon River, explored Machu Picchu in the Peruvian Andes, and written over a dozen books detailing her adventures.

To Halsell’s credit she wasn’t interested in stealing her subjects’ souls so much as borrowing them to highlight issues she considered important. To her detriment, her better-known exploits offered more in the way of sensationalism than true reform of the conditions she criticized and readily escaped. Whatever her motivation she retained and returned to the advantages of being Caucasian, educated, well-connected and affluent.

From the vantage point of current discussions of racial issues, it’s easy to dismiss Halsell’s cultural appropriation as the stunts of a privileged White woman who exploited racial stereotypes to ease her own conscience and further her career. This criticism was expressed in Soul Sister by Halsell herself in the words of Jim Hamilton, a Black school administrator she had met in Puerto Rico while she was darkening her skin. Early in her stay in Harlem when she appealed to him for help,

Just as frankly he replied that I would not get it. He let me know that he and others like him were sick and tired of white liberals coming to “study” and help the Negroes. “You help as long as your needs hold out, and then when you’ve eased a guilty conscience your help is finished.”

He said that not for one second would he condone such romantic notions as a desire to go poking my nose into his friends’ lives “to discover more of your untruths.” And he added, “No, no indeed, I won’t open up any of my friends’ closets—for your inspection!” 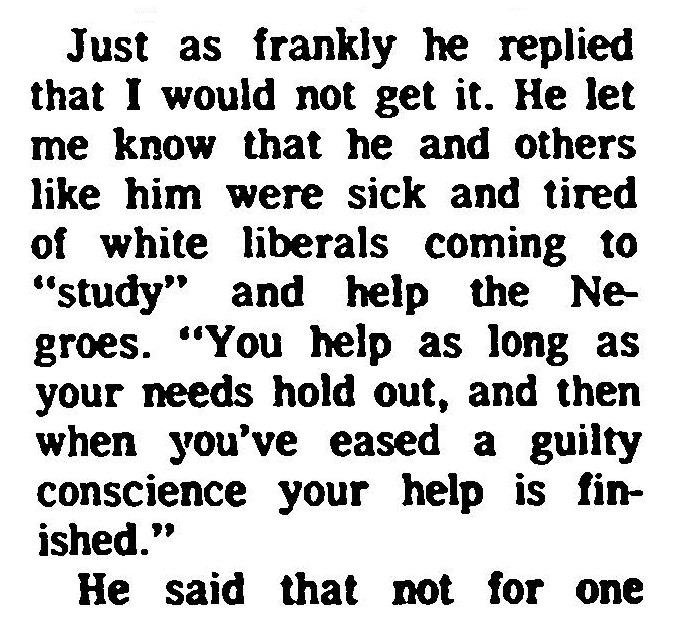 Her roleplay was not without personal risk. Halsell’s purported “romantic notions” about life as a Black person nearly got her arrested in Indianola, Mississippi, as detailed in another excerpt from Soul Sister published in the Boston Herald. Halsell arrived at a ramshackle Greyhound bus station at night and needed to call a local activist to come pick her up. But there was no working telephone in the waiting room to which Blacks were relegated. While convincing a White attendant to call on her behalf, Halsell was accused of creating a disturbance. The police were summoned. The bus station attendant speaks first:

“Thinks she can just take over the place, wouldn’t stay over there,” says the white owner nodding to his segregated waiting room for Negroes, “where she belongs.”

The officer listens to each white person berate me as something akin to a low criminal, and when I attempt to tell him that I merely asked to use a telephone, “and isn’t this a bus station, and isn’t a bus station supposed to have a public phone?” he does not listen to me, but peremptorily orders me to go to the patrol car outside.

He has me in custody, and clearly plans to take me, as a prisoner, to the Indianola jail when a white priest steps from a car parked a short distance from the police car. A young black man is with the priest.

“Who are you arresting?” the priest asks.

“She was causing a disturbance, loud talking…” the cop’s voice trails off.

“Are you arresting her? Do you have charges?” the priest persists.

“I’m Father Walter,” the priest tells me, and the black man adds: “And I’m Rudy Shields.” I give my name and they now tell me that Carver Randle has asked them to meet me.

Then he climbs into his car and speeds off, but this time without his siren on.

Another activist who welcomed Halsell with open arms was Charles Evers, the older brother of Medgar Evers. Medgar was the former Mississippi field secretary of the National Association for the Advancement of Colored People (NAACP) who was assassinated in 1963. That sad moment was a turning point for Charles, who gave up his criminal pursuits to devote himself to finishing his slain brother’s work. Charles Evers subsequently became the mayor of Fayette, Mississippi, and ran for governor while collaborating with Halsell on a book about his family.

The shadow of a Southern white woman falls across the historic effort of black Charles Evers to become governor of Mississippi.

She is Grace Halsell, a former aide to President Lyndon Johnson, who lived with the Evers family in Fayette, Miss. (pop. 1,600) while researching a book about Evers’ life. Evers is mayor of Fayette, and Miss Halsell sat in on some of the soul-searching, which led to his try for the state house in a campaign certain to capture national attention.

Black Life in America also includes an article that features interviews with Black victims of vitiligo, a skin condition that strips away the skin’s dark melanin pigment, leaving its sufferers with a white complexion. In that article the same dermatologists who treated Grace Halsell and Black Like Me author John Howard Griffin discussed the social and physical implications of their patients’ apparent racial transformation and its converse.

Mrs. Moore was the first Negro that Dr. [Robert] Stolar made completely white. “After 20 years I guess it’s final,” she said. “I had to be careful about getting suntanned, and that wasn’t as funny as it sounds because I love to be going in the sun. But this year I have been out in the sun with these short sleeves and no hat, and no harm done. No dark blotches, no irritation.

Did she like being white? Had the change in color meant a change in lifestyle?

“No ingratitude to the doctor, but I’d rather have stayed black. But there you are, it can’t be helped. I live in the same way I always did, in spite of it. The same friends—some of them white; I’m not prejudiced. The same husband—he’s black. Bob didn’t mind when I went white.”

During her excursions into Black society, Halsell became fascinated with the dualism of racially-mixed couples. As a young woman growing up in Texas she was aware of anti-miscegenation laws; as a White woman passing as Black she attracted intense sexual interest from White men, at one point verging on rape. She documented her exploration of the intersection of sexuality and race in the book Black/White Sex published in 1972, prior to such groundbreaking works as Erica Jong’s Fear of Flying and Shere Hite’s The Hite Report on Female Sexuality. Unsurprisingly, Halsell’s frank discussion of taboo topics such as “nighttime integration” was controversial.

She believes there has been a great deal of hypocrisy in black-white relationships.

“For over 300 years we’ve had nighttime integration by white males,” Miss Halsell said. A high percentage of those called “black” have white grandfathers.

On the other hand, she said, the black man has been pictured as some kind of sex giant. “He doesn’t want to be considered as a sex object in a relationship,” she said.

Halsell’s frequent reinvention and personal investment in disparate racial groups and international communities left her both exhilarated and diffuse when it came to her own identity.

“I have this extra dimension now, which will always be a part of me. I stayed at the Waldorf in New York last week, so close to Harlem, and I felt like two people.

“It was such a short period of my life, like looking through a keyhole at people, who are in there for all their lives.”

The singularity who was Grace Halsell died in 2000 at the age of 77, likely from the effects of the drugs she took when researching Soul Sister. Shortly after publishing that book she wrote and published another on los viejos, “the old ones” of Vilcabamba, Ecuador. Halsell lived for a year in that small Andean village to learn the secrets of long life from a number of centenarians there. Her findings: a plant-based diet, few possessions, regular productive activity, spiritual depth, and equanimity in the face of crises. One can speculate that Halsell herself embodied many of these virtues and practices in her constant pursuit to satisfy her curiosity and express her zest for life.