The Great Blondin: ‘Crossing of Niagara on a Rope!’ 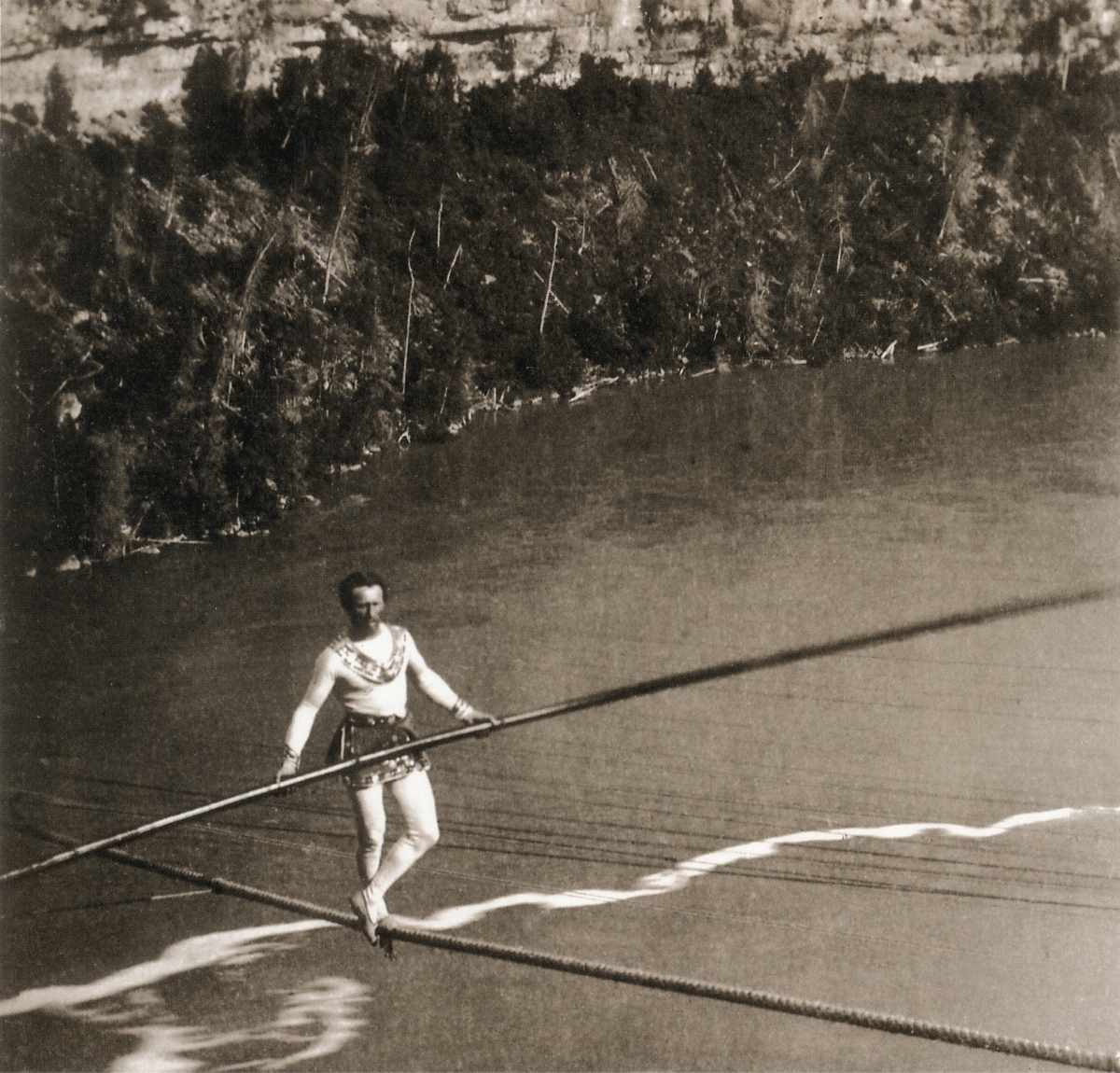 The acrobat whose name would become synonymous with tightrope walking was born Jean-François Gravelet in Saint-Omer, Pas-de-Calais, France. Generally known as Charles Blondin (1824-1897), the performer was also referred to as Jean-François Blondin, Chevalier Blondin, The Great Blondin, and, in his first public appearance, The Boy Wonder.

Blondin traveled to the United States in 1855, joined a circus, and became famous for crossing the Niagara Gorge, at times doing summersaults, on a tightrope. In a series of articles, originally reported in the Rochester Union and reprinted in the Washington, D.C., Constitution, the acrobat himself and his first crossing are described on July 6, 1859, this way:

“About four o’clock M. Blondin arrived in a carriage decorated with the American and French flags, and was received with cheers from the multitude, music from the bands, and the firing of a cannon, which was answered from the Canada side. A ring was made by a rope, and within the ring was a tight rope six feet above the ground, upon which the preliminary exhibition took place.

“M. Blondin appeared with a smiling face, in the most agreeable humor. He is a man of medium height, of rather muscular build, but not fleshy; has light hair, hazle [sic] eyes, wears a small moustache and gotee [sic]. On this occasion he was arrayed in a sort of half-Turkish and half-circus dress, and wore a wig with long pendent curls. His feats upon the tight-rope were sufficient to give confidence to all who witnessed them—if they had doubts of his success in the great feat promised them. He would turn somersaults, leap over chairs backwards and forwards, and do a great many other things upon this rope which ordinary gymnasts find it difficult to do upon the ground. At length this performance was at an end, and Monsieur retired to his tent to dress for the rope walk.”

The Buffalo Commercial Advertiser of the same date thus describes the great feat:

“Arrangements had been made for firing the cannon at this moment, but the gun hung fire and refused to go off. Blondin good-naturedly called out to have it shaken up, but the gun did not speak. For nearly ten minutes the daring adventurer stood in full view of the breathless thousands, in familiar conversation with those around him, and evinced no signs of faltering. Indeed, from his appearance we do not think he had the least fear or a shadow of doubt about his success.

“At fourteen minutes past five Blondin coolly picked up his black pole, some twenty five feet long, which he used for balancing, and walked down the rope with a firm but cautious step.” 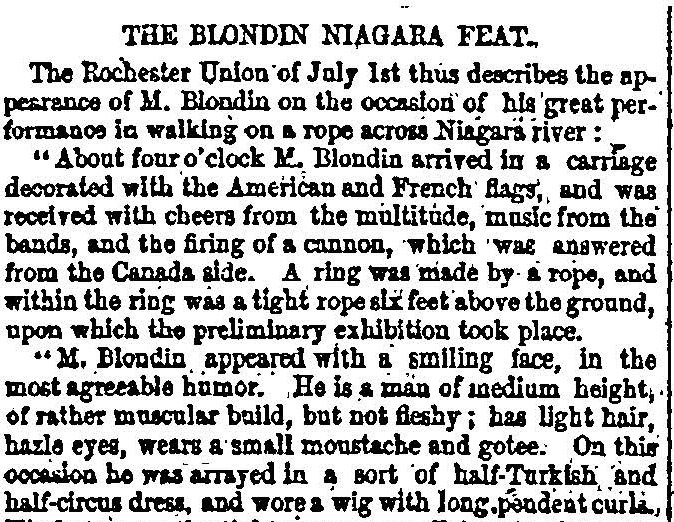 Headlining its article “Crossing of Niagara on a Rope!” the Albany Evening Journal described Blondin as outfitted in

…a dress similar to the one frequently worn by acrobats and public gymnasts, viz: pink tights, buckskin moccasins, and spangled tunic of yellow silk; he was bareheaded, without even the fillet of white satin that is frequently worn.

He walked rapidly and firmly, as if he had been on a bridge, until he chose to stop to indulge in some gymnastic evolutions for a few minutes. He balanced himself on one leg, sat down, and laid down on the rope at full length, then, recovering himself, he walked to the middle of the river, where he again stopped to accomplish yet another feat not down in the bill. Here, standing on the rope, with as much indifference as if it was a solid platform, he deliberately lowered a small line to the little steamboat, the “Maid of the Mist,” that had steamed out to that point; to the line was attached a bottle of wine by the captain of the boat, and the bottle being drawn up by the adventurer, he opened it, and, making a comprehensive bow to both crowds on the sides of the river, he drank the health of all present; then throwing the bottle into the river, he walked on, stopping no more until he reached the Canada shore. He was exactly nineteen minutes crossing the river, including stops.

And the return trip:

At 6:12 he stepped on the rope to commence his return passage. He rested but once, lying down on the rope for two minutes, and accomplishing the return trip in eight minutes.

As soon as he reached the shore, the cheers and shouting was almost deafening, M. Blondin, having been permitted an instant for refreshment, was seized by the enthusiastic crowd and place on their shoulders and borne about in triumph. He was then placed in a carriage and escorted through all the principal streets of the village, the crowd thronging him on all sides, and cheering in the wildest manner. He did not appear very much exhausted, and manifested no more fear or nervousness than any ungymnastic novice would at eating his breakfast. 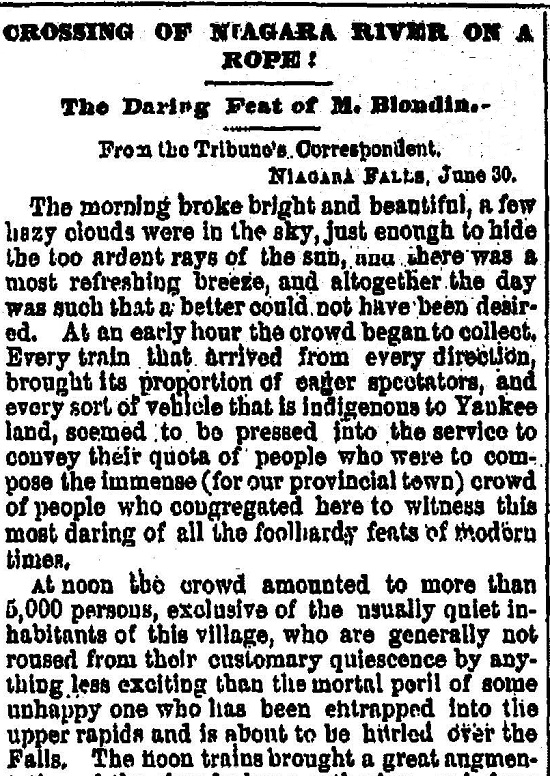 Nothing of such useless peril and daring has ever been done. Twelve thousand spectators saw it, some of our citizens included. The same trick is to be repeated.

On the afternoon of the Fourth, a great crowd assembled to witness a repetition of the useless peril and daring. The actor now walked rapidly backwards 200 feet down the slope of the rope, performing various antics, lying down on his back, whirling round as if on a point. On his return from the Canada side, he enveloped himself in a sack reaching down to his knees completely blinding him and confining his arms. He performed the same feats returning to the American side, amid the triumphant shouts of the multitude. 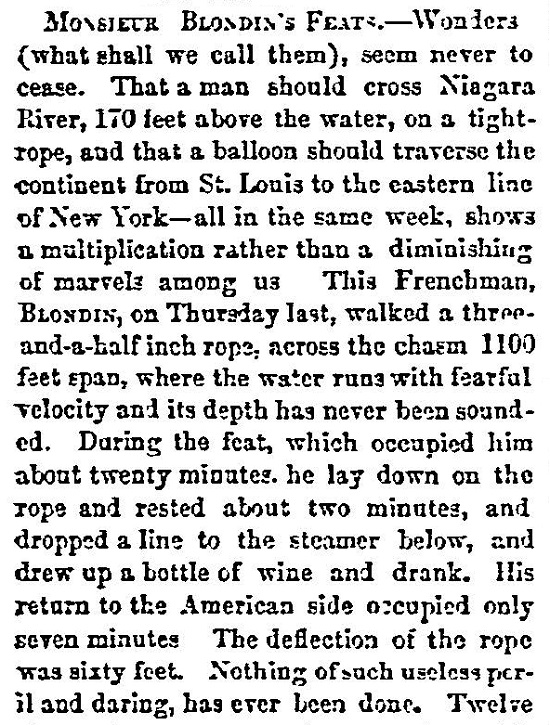 On what was then planned to be his final crossing, Blondin increased his antics, as reported by the Lowell Daily Citizen and News:

This is the day appointed by this celebrated gymnast for his final tight-rope feat at Niagara. The Gazette, of that place, gives notice that he will on this occasion push a wheelbarrow before him on the rope. One would suppose that he had gone to the extent of his ability in his previous efforts in promenading across the chasm of the river, and especially on the last occasion, when he walked across blindfolded by a sack drawn over his head and body. How he expects to wheel an Irishman’s buggy over, manage his balancing pole, and keep from giving the coroner a job, is rather more than we can undertake to tell. 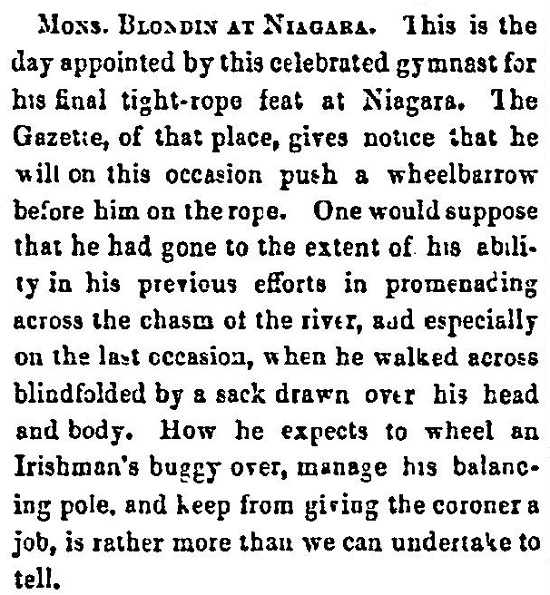 In August, Blondin was back on his tightrope, and this time he brought his manager along.

Mr. Blondin occupied something over half an hour in crossing, most of the time being spent in his performances on the rope. He remained upon the Canada side to rest and refresh himself some fifteen or twenty minutes, and again appeared upon the rope. This time he had his Agent, Mr. Henry Colcord, a man weighting about 136 pounds, upon his back, and his balancing pole in his hands. He proceeded down the rope very slowly and cautiously, as if feeling every step, until he was about a hundred feet from the Canada side, when Mr. Colcord dismounted and stood upon the rope immediately behind M. Blondin. They here remained to rest probably three or four minutes, when Mr. Colcord again mounted, and M. Blondin proceeded, and walking very slowly and stopping occasionally to balance himself. They stopped five minutes in crossing, and each time Mr. Colcord dismounted, and again resumed his position. He had his arms around M. Blondin’s neck and his legs rested on the balancing pole. He was in his shirt sleeves, and wore a straw hat. About 25 minutes were occupied in accomplishing the first half of the rope, and the balance in 20, making 42 minutes from bank to bank.

For some seconds before the American shore was reached the crowds gathered round the end of the rope became very noisy, and a good deal of excitement prevailed, and when he reached the staging on this side safely, the vast crowd shouted with the greatest enthusiasm.

On reaching the landing M. Blondin was much flushed and appeared very much fatigued, while Mr. Colcord was pale, but did not betray any signs of fear.

Through the end of August 1859, Blondin continued amazing vast crowds and generating incredible headlines, such as The New York Herald’s “He Crosses in Shackles and Returns with the Cooking Stove,” After describing his crossing to Canada in shackles yet still performing acrobatics on the way, the article continues with this account of a truly well-balanced breakfast.

About five minutes past six o’clock Monsieur Blondin appeared upon the Canada end of the rope. He was dressed as a French cook, and wore the clothing of the chief cook at the International Hotel. This consisted of a white cap, white jacket and apron. Soon after appearing at the other end of the rope, he fastened the stove to his back, and, with his balancing pole, started for the American side. He walked along quite smartly until he had crossed the centre of the rope, when he paused and laid down his balancing pole. He next sat down upon the rope and unfastened the stove. He now rose rose to his feet, and having fastened the stove to the main rope by means of cords, got over the stove to the other side and sat down, facing the American shore. The wind was blowing very fresh, and he had great difficulty in lighting the lamp, the matches seeming to go out. In a second or two a dense smoke was seen to issue from the stove pipe, and deafening yells arose on both sides of the rivers. He commenced to prepare the omelet. Having put flour and water into a pan, he stirred it up, and set the pan down. He next broke a couple of eggs and beat them, and poured them into the pan with the flour and water, and added the seasoning. The blaze could now be distinctly seen issuing from the top of the stove. In a minute or two the omelet was baked, and he threw it up, turned it and caught it in the pan again.

The showman lowered his fare to the crowd aboard the Maid of the Mist and “having fed the hungry crowd on the steamer, put out the lamp, packed up his kit, and, having stepped over the stove, sat down on the rope and fastened it to his shoulder.” Researchers seeking additional stories about The Great Blondin and dozens of other popular entertainers of the 19th century in Early American Newspapers will not be disappointed.