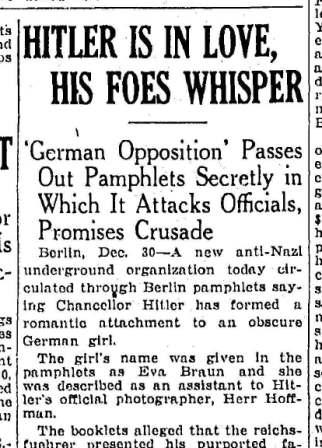 As early as Dec. 31, 1937, however, an article in the Springfield Daily Republican of Springfield, Massachusetts, under the title “Hitler Is In Love, His Foes Whisper” with a dateline of Berlin, Dec. 30, begins:

A new anti-Nazi underground organization today circulated through Berlin pamphlets saying Chancellor Hitler has formed a romantic attachment to an obscure German girl. The girl’s name was given as Eva Braun and she was described as an assistant to Hitler’s official photographer, Herr Hoffman. (p. 7)

Eva Braun, assistant to Hoffman, is already well known in Munich as a special friend of Hitler’s. Last year she moved into a new villa which is located in the neighborhood of Hoffman’s and Hitler’s estates. A car driven by special guards invariably calls for her. (p. 213)

The Living Age article was a translation from a German article published in Otto Strasser’s anti-Nazi organ, Die Deutsche Revolution, based in Prague. One might ask in how many other instances through the popular press the American public was made generally aware of matters largely concealed from their own populations by dictators, military juntas, and other totalitarian or even democratic regimes?

Editor's Note: On July 3, we received a note from distinguished British historian Antony Beevor in reference to the Readex newspaper citation above. Discussing the value of American Newspaper Archives, Beevor wrote:

It is a great boon for historians and researchers to have such a valuable reservoir of material instantly accessible.

Educated at Winchester and Sandhurst, where he studied under John Keegan, Beevor left the Army to write. His works include four novels and nine books of non-fiction, including the U.K.'s no. 1 bestselling The Second World War (Weidenfeld & Nicolson, 2012). For more information about Antony Beevor and his award-winning books, please visit his website.
Tags
Filed under