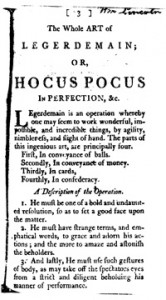 For many years people have probably thought that the following entry from the catalog of the American Antiquarian Society, which describes an item in the Readex digital edition of Early American Imprints, Series I: Evans, was the last word on the first, the earliest Hocus Pocus or conjuring book printed in the United States. Here is the entry in full:

Title: Hocus pocus; or The whole art of legerdemain, in perfection. By which the meanest capacity may perform the whole without the help of a teacher. Together with the use of all the instruments belonging thereto. To which is now added, abundance of rare and new inventions. By Henry Dean. Date of Publication: 1795 Early American Imprints, 1st series, no. 28540 Author: Dean, Henry. Subjects: Magic tricks. Edition: The eleventh edition, with large additions and amendments. Publication Information: Philadelphia: Printed for Mathew Carey, no. 118, Market-Street., 1795. Physical Description: [2], 106 p. ill. 14 cm. (18mo) Additional Index Points: Art of legerdemain; or, Hocus pocus in perfection. Printers, Publishers, Booksellers: Carey, Mathew, 1760-1839, publisher. Folwell, Richard, 1768?-1814, printer. Place(s) of Publication: United States--Pennsylvania--Philadelphia. Language: English Illustration Type: Relief prints. Cloth bindings (Binding). Notes: "So far as is known, it is the first conjuring book to be published in the United States of America."--Hall, T.T. A bibliography of books on conjuring in English, 1580-1850. Running title: The art of legerdemain; or, Hocus pocus in perfection. "Printed by R. Folwell, no. 33, Arch-Street."--colophon. References: Evans 28540

The American Antiquarian Society librarian-author of the above note on Hocus Pocus duly cites Hall’s magisterial bibliography and there the matter perhaps would have rested but for the article "Hocus Pocus: The Perfection of the Whole Art of Legerdemain" by David D. Meyer in the Fall 2007 issue of The Fellowship of American Bibliophilic Societies newsletter, Vol. XI, No. 2. Meyer reminds us that in 1951 Edgar Heyl, the learned American conjuring bibliographer and an early member of the Baltimore Bibliophiles, had argued that the earliest American printing on the subject of conjuring "belonged to the ‘Legerdemain’ section of the Encyclopaedia Britannica." Thomas Dobson, the Philadelphia printer, published his pirated version with the simple title of Encyclopaedia. Meyer then quotes Heyl to this effect:

Dobson began publication in 1790 and the Encyclopaedia was issued in parts to subscribers, but without title pages. In 1793 volumes eight, nine and ten were issued, and it is known that volume nine [containing "Legerdemain"] had made its appearance by about the middle of the year. The [entire] work was completed in 1797, at which time Dobson supplied his subscribers with title pages, all dated 1798, and the sheets he had not yet sold were bound and issued with the same title page. Thus this article ["Legerdemain"] was available to the public two years before the appearance of Dean’s book, and probably was the first treatise on conjuring published in America. [Edgar Heyl, "Early American Conjuring Imprints," The Sphinx, Vol. 49, No. 1, January 1951]

The composite volumes of the fascicles issued from 1790-1797 may be found in the Readex Early American Imprints, Evans at No. 33676. Bibliography may sometimes share some of the practices of the ingenious art of legerdemain, for Henry Dean described legerdemain as "an operation whereby one may seem to work wonderful, impossible, and incredible things, by agility, nimbleness, and slight of hand."
Tags
Filed under