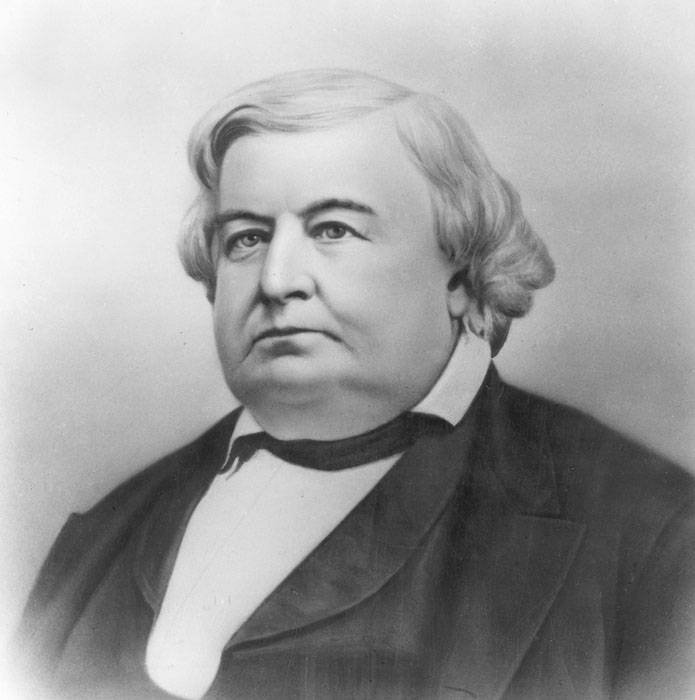 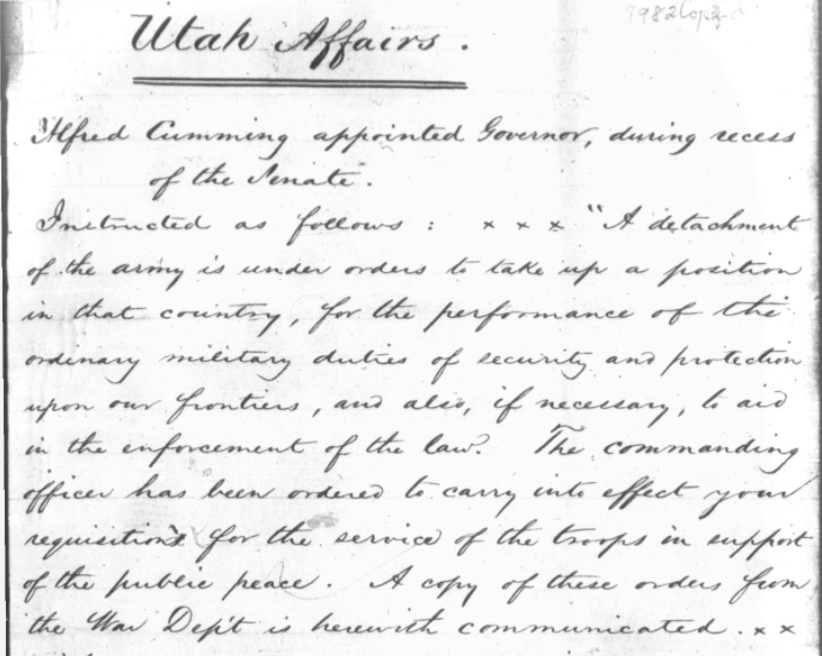 Upon my arrival in this city in April 1858, I found the whole community moving, or preparing to move, in anticipation of the advance of the army. An opinion prevailed that the approach of the army to their settlements would be the signal for the commission of every species of crime that an infuriated soldiery might perpetrate. 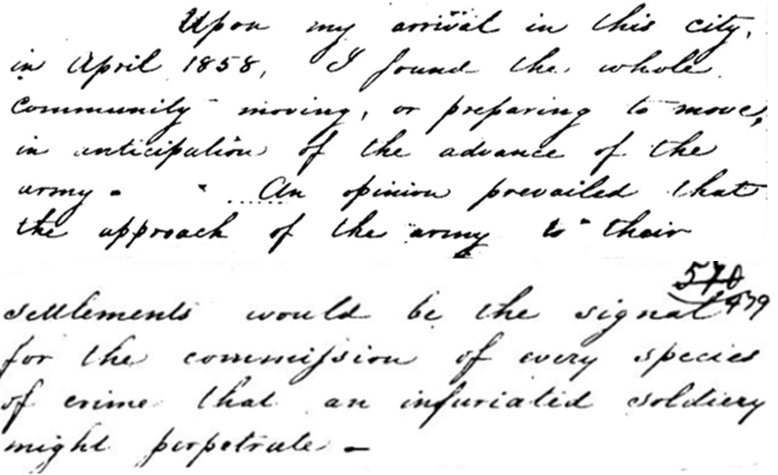 The soldiers might well have been infuriated as they had just spent a miserable winter on the plains of what is now Wyoming being shot at, having their stock driven off, and seeing the grasslands (and Fort Bridger) burnt before them. Rations and tempers were short. This was the Utah War.

The first Mormon settlers in Utah were by choice a people apart, the more so since being driven out of Missouri in 1838. The Mormons generally wanted to be left alone to worship their god and cultivate their communal society as they understood was their divine and constitutional right. For a few years they did just that in what was then Mexican territory, until the United States won the Mexican War in 1848 and redrew the map to include their domicile within the United States.

That success would not be repeated by the two men subsequently named to the position. In this legislative memorial from January 6, 1858 [Parker 8014], over four dozen prominent Utah citizens assert their low opinion of the outsiders sent to govern them:

You have appointed, the newspapers state, a full set of officials for Utah from among entire strangers, and to do so were obliged to hawk about the offices from State to State, every honorable and principled man indignantly declining your appointments, until at length you succeeded in finding the requisite number from among the reckless, the drunken, the unprincipled, the dissolute, the houseless and penniless, who alone feel the need of the backing afforded by bayonets, and for this reason had far better remain where society is more congenial to their depraved and corrupt tastes. 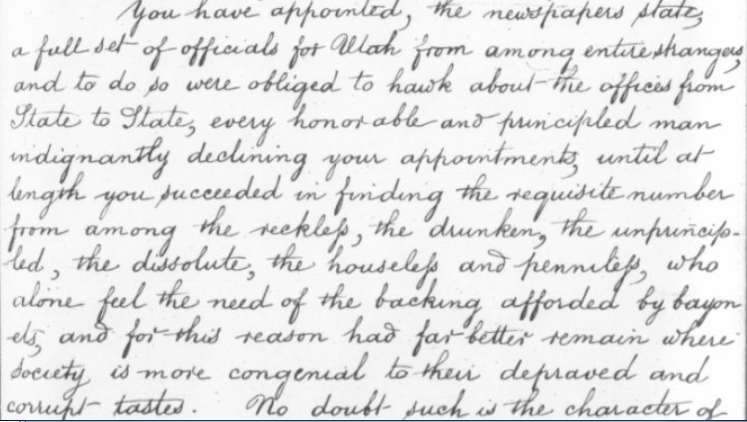 Such misgivings were mutual upon the part of the federal appointees. It’s worth working through the handwriting in Governor Harding’s four-page private letter to Secretary of State William Seward, in which the former characterized life in Utah Territory thus:

(This is to be handed immediately to Sec. Seward, and to no one else.)

After a residence in this city for now two months as the Federal Governor of this Territory, I deem it my duty, to make a statement to my government, which I now have the honor to do. I have not formed my opinions hastily, and you may rest assured that “I have set down naught in malice.” The appurtenances for communicating with my government without having my dispatches overhauled, are not very flattering. It is my deliberate opinion, that no communication from this Department to the Federal government can be sent from this power, through the P.O. without danger that its contents will be known here at head quarters, by which I mean this power that rules the people here, under an absolutism scarcely to be credible by those not in a situation to see and hear for themselves.

The first and most important inquiry is, are these people (or in the vernacular of this place, “this people,”) loyal to the Government of the United States? I am compelled to answer in the negative, and will state some of the reasons, which determine my judgment.

In the first place, Brigham Young and other teachers are constantly inculcating in the minds of the crowded audience who sit beneath their teachings very reliable, that the Government of the United States, is of no consequence, that it lies in ruins; that the prophecy of Joseph Smith is being fulfilled to the letter, that according to that prophecy, the United States as a nation, is to be destroyed, that the Gentiles (as they call all persons outside their church,) will continue to fight each other, until they are no threat and then the Saints are to step in and quietly enjoy the possession of the land and all what’s left of the ruined cities and desolated fields; and that “Zion is to be built up,” not only in “the valley of the mountains,” but the great center of their power and glory, is to be in Missouri, where the Saints under the lead of their prophet, were expelled many years since. 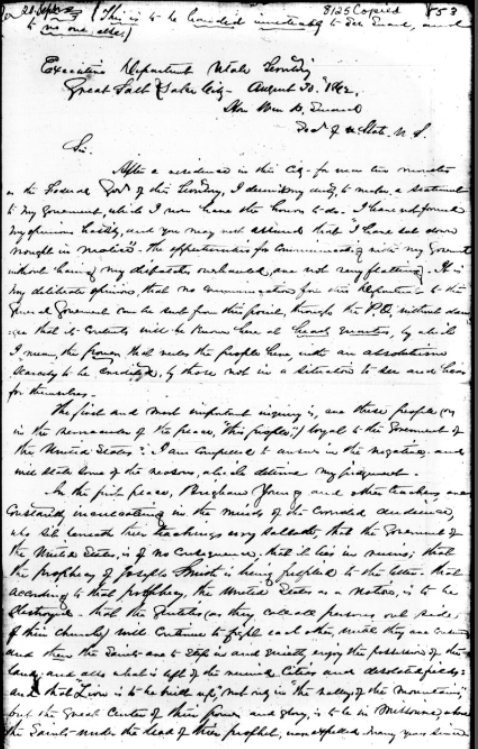 At the core of federal and popular contempt for the Church of Jesus Christ of Latter Day Saints was the doctrine of plural marriage, which sanctified married men in taking more than one wife. Readex’s America’s Historical Newspapers includes the only issue of the dissident-Mormon Nauvoo Expositor [Nauvoo, Illinois] that ever appeared, published on June 7, 1844, citing numerous instances of Joseph Smith’s revelation of this controversial practice.

As then-Mayor of Nauvoo, Smith called for the press to be destroyed. While under arrest for treason relating to that act, Smith and his brother Hyrum would subsequently be killed by a mob on June 27.

The excerpt below quotes former Mormon leader and publisher of the Nauvoo Expositor William Law in testimony against the practices of the LDS Church:

AFFIDAVITS. I hereby certify that Hyrum Smith did (in his office,) read to me a certain written document, which he said was a revelation from God, he said that he was with Joseph when it was received. He afterwards gave me the document to read, and I took it to my house, and read it, and showed it to my wife, and returned it the next day. The revelation (so called) authorized certain men to have more wives than one at a time, in this world and in the world to come. It said this was the law, and cammanded [sic] Joseph to enter into the law.—And also that he should administer to others. Several other items were in the revelation, supporting the above doctrines. WM. LAW 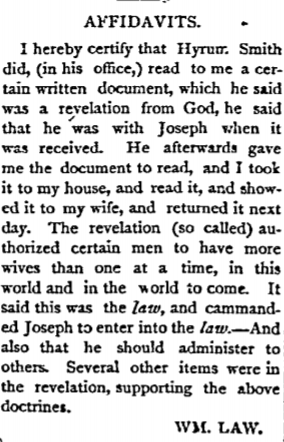 Brigham Young professed to be less personally or dogmatically interested in the press than Joseph Smith. In his note “To the Public” in the March 4, 1863 edition of The Deseret News, Young claimed that that paper “...has not been an organ of mine.”

TO THE PUBLIC. I hereby inform the public that the DESERET NEWS is not and has not been an organ of mine, for, except matter accompanied with my name, I have only occasionally, and that too some time ago, known any more of the contents of the NEWS until after it is published, than I have of the copy furnished to the compositors of the New York Ledger. 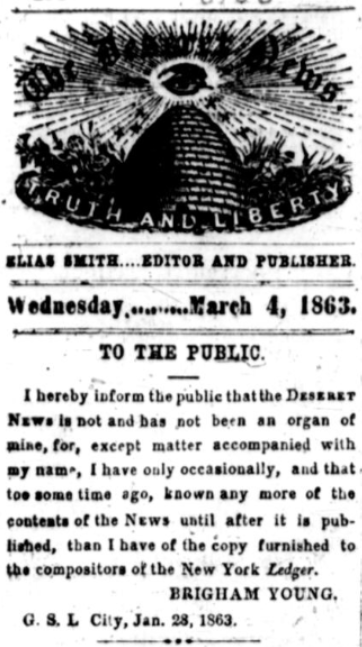 To be fair, there was misconduct on all sides, as the federal troops billeted near Salt Lake City were hardly on their best behavior:

DRUNKEN SOLDIERS.—We have been informed that three drunken soldiers made quite a demonstration of their peculiar notions of morals and civilization, in the 11th Ward, on Monday last, and tried, in several instances, to force their way into houses where there were women. Why they were not trotted to the police office instead of towards Camp Douglas, report saith not. 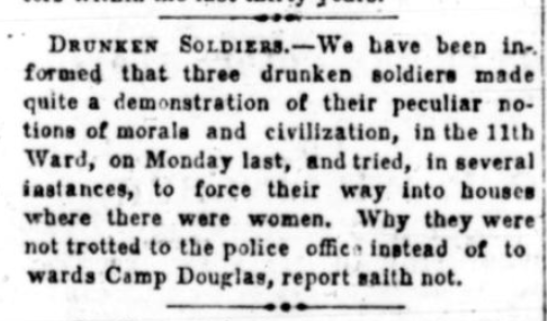 So reviled were the troops that their military post was established at Fort Douglas in the eastern foothills of Salt Lake City at some remove from the local population; eventually they would be posted much further south and west to Camp Floyd. For their part, the troops maintained their own paper, The Union Vedette, wherein they sought to balance their infamy with grievances and pointed arguments challenging LDS dogma.

The apostles of Polygamy say the Vedette is abusing them. We deny it. We but write from the record they have made. The increased demand for our paper indicates that those who are not Polygamists and Traitors do not consider our articles abusive; and even if they were so, are we not justified when it is taken into consideration that we are dealing with persons who were once in open rebellion against our Government--who in Tabernacle and Ward sermons abuse and deride the Nation and pray for its destruction--who term us California blacklegs and cut-throats because we wear the uniform of our country--who say our wives and daughters are prostitutes?

They refuse the Government forage when the bins of the Tithing Offices are overflowing and government stock starves on the bleak hills of Utah. All these and much more we have bourne for over two years; and now, that we publish their own abusive and traitorous tirades and comment upon them we are, forsooth, abusing them. We presume they will next term it persecution. Be it so. If God spares us we intend to continue the publication of the record they have made.

In publishing that record, one writer quoted words attributed to Brigham Young making the argument that beyond the constitutional issue of freedom of religion, the practical aspect of preventing polygamy presented insurmountable obstacles for the federal government:

True we have more wives than one, and what of that? They (other than Mormons—Ed. Vedette) have their scores of thousands of prostitutes, we have none. But polygamy they are unconstitutionally striving to prevent; when they will accomplish their object is not for me to say. They have already presented a resolution in Congress that no man, in any of the Territories of the United States, shall be allowed to have more than one wife, under a penalty not exceeding five years imprisonment, and five hundred dollars fine. How will they get rid of this awful evil in Utah? They will have to expend about three hundred millions dollars for building a prison, for we must all go into prison. And after they have expended that amount for a prison, and roofed it over from the summit of the Rocky Mountains to the summit of the Sierra Nevada, we will dig out and go preaching through the world. (Voice in the shade: What will become of all the women, will they go to prison with us?). Br. Heber seems concerned about the women’s going with us; they will be with us, for we shall be there together. This is a little amusing.

The LDS Church eventually banned polygamy in 1890. It would be six more years before Utah was admitted as a state.