Illustrated Journalism: The Innovative Use of Maps by Northern Newspapers to Report Civil War Events 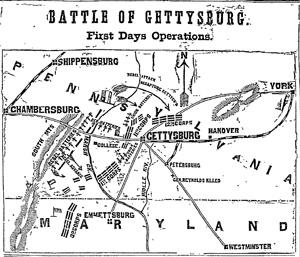 In Civil War Newspaper Maps: A Historical Atlas (Johns Hopkins, 1993), David C. Bosse presents 45 battlefield maps published in daily Northern newspapers. Each is accompanied by a clear overview of the event and captivating commentary on the map itself. These detailed maps, many originating from eyewitness sketches by correspondents on site, illustrate well-known battles and not-so-familiar campaigns from more than a dozen states—from Alabama to Mississippi to Virginia. 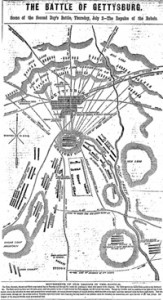 In Bosse’s introductory essay titled “The Published Record,” he writes:

The New York and Philadelphia presses published by far the greatest number of maps, the majority of which represented the eastern theater of war. Two main factors accounted for the geographical distribution of newspaper map coverage. First, the effort to capture Richmond and the need to protect Washington made Virginia the major theater of war and focused the attention of the Northern press there. Second, readers of daily newspapers such as the New York Herald and Philadelphia Inquirer were especially interested in their local and state troops originating in the East.

Searchable digital archives of both the Philadelphia Inquirer and the New York Herald are available to institutions of all kinds. For more information on these two newspapers (and dozens of others from more than 40 states), please use this form.