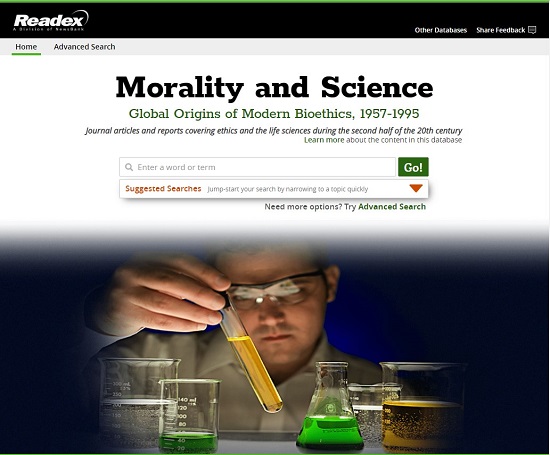 Part of the power of Readex’s new Morality and Science: Global Origins of Modern Bioethics is the access it affords to primary material that is otherwise difficult to obtain in English-language translations. This is certainly true when it comes to the suppressed Soviet controversy regarding Lysenkoism as a credible expression of the tenets of evolutionary biology. That debate bears a striking resemblance to America’s love/hate relationship with climate change as a consequence of global warming in which human actions are held to play a significant role—or not. And the parallels go deeper still.

In 1925 America had a problem with evolution, or rather with government endorsement of Charles Darwin’s widely accepted theory of “natural selection” which implied that human beings were the descendants of primates rather than created in the semblance of a divine being. The “Scopes Monkey Trial” of that year pitted orator William Jennings Bryan against highly regarded attorney Clarence Darrow in a bid to punish (or free) John Scopes, a Tennessee high school teacher who taught evolution rather than creationism. Scopes was jailed for doing so under Tennessee’s Butler Act of 1925, which prohibited the denial of Creationism in public education. The case was ultimately invalidated on technical grounds during an appeal of the initial ruling to fine Scopes $100. It became the template for the 1955 play Inherit the Wind, which was later made into a motion picture. 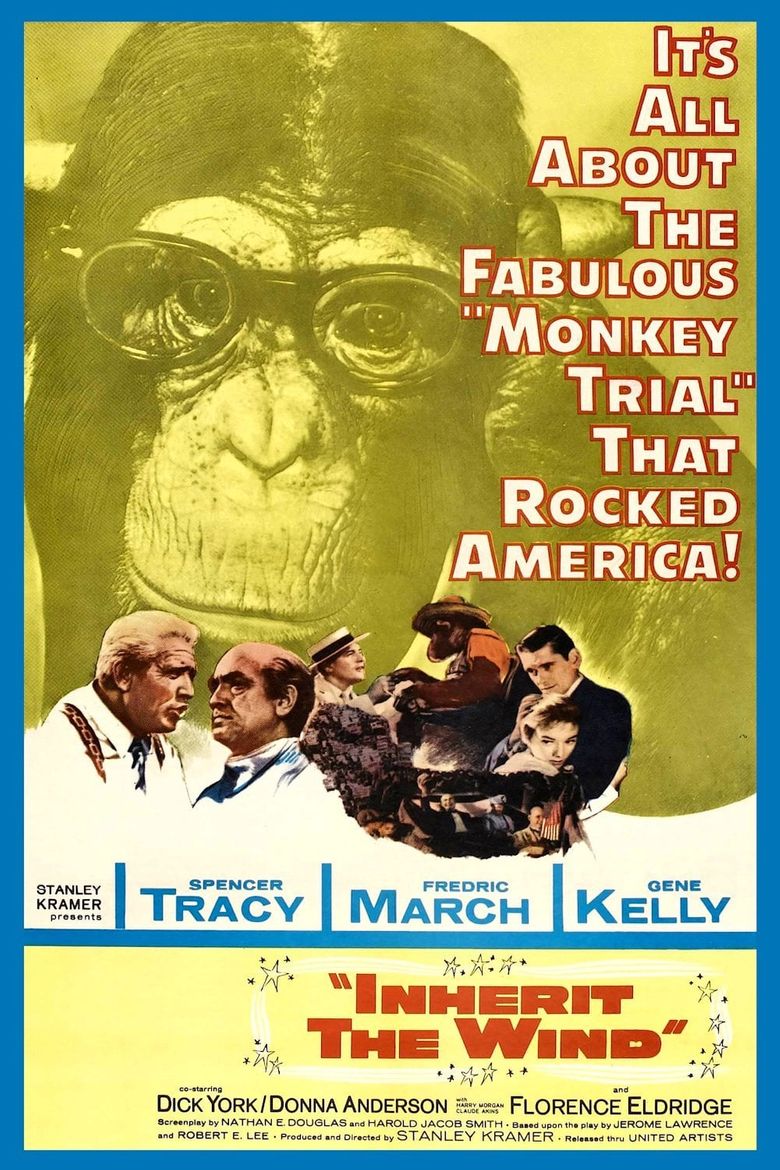 Remarkably, the Soviet Union also had a problem with evolution in the 1920s despite the Communist Party’s ideological hostility towards religion. The issue turned on the theory that “soft” or culturally dependent and imposed characteristics were as inheritable as physical traits such as eye color or stature. The incidental plucking of leaves from plants was held to be as significant as mutations and changes that were passed down through millennia. Peas and proletarians alike could thus become exemplars of Soviet technology and socialist wisdom; the Soviet experiment could reinvent humankind. Or not.

As in America’s case, the Soviet Union had two champions representing the opposing sides. Arguing the case for “hard” genetics were the adherents to the theories of Gregor Mendel, a Moravian monk who worked with pea plants to establish the theory of recessive and dominant genetic traits. Mendel died in 1884, but his work was eventually accepted as accurately describing how modern genetics works.

Opposing Mendelian inheritance was Trofim Lysenko, an agronomist who in 1928 claimed to have perfected a technique known as vernalization through which crop yields could be dramatically increased. Even weeds, according to Lysenko, might be converted into cereal crops through hybridization and grafting using imposed cold conditions to stimulate growth. 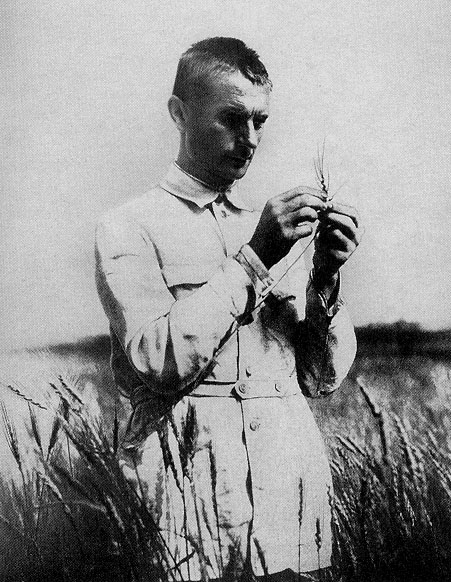 Consider the timing of Lysenko’s claims, barely a decade after the 1917 Russian Revolution. This was a period of great famine in the nascent Soviet Union, when farms were being collectivized and peasant farmers killed or sent to labor camps. Agriculture became a problem, and unreliable.

When Vladimir Lenin died in 1924, his successor at the head of the Communist Party, Joseph Stalin, inherited that problem: the Soviet people were starving to death. Along comes Lysenko claiming to perfect food crops just as dialectical materialism claimed to perfect human beings. The timing was too good to be true—and it was irresistible. Of course Stalin supported Lysenko, exiled his opponents, and thus ruined Soviet agriculture and genetics until well after his own death in 1953. Lysenkoism held sway until the removal of Khrushchev in 1964, and later as demonstrated below.

In 1962 in the Le Débat Communiste [The Communist Debate] French author Marcel Prenant described how the “Lysenko affair” led to the “destitution, prison, and exile, sometimes even physical annihilation” of all who opposed him.

From pre-war days Lysenko was one of the biologists whom the Soviet Power called upon to promote, by different research routes, methods of rural economy. In the matter of selection of animals and plants, many of them were inspired by the classical principles of so-called Mendelian genetics. Others, among them Michurin and then Lysenko, worked more empirically, according to the tradition of the practitioners. After the death of Michurin, Lysenko had already attempted to assure his own hegemony in this field; but it was in 1948, at the time of Beria’s full evil-doing, that the affair took on all its gravity.

Before more than a thousand learned men and agronomists meeting in Moscow, Lysenko and his partisans attacked the geneticists with extreme violence, accusing them of sabotage, and declaring their theories false and sterile even in principle, and contrary to Marxism-Leninism. At the end of the session, Lysenko even threatened them, very clearly, with Stalin’s wrath. By that means he made a clean sweep, obtaining for the most recalcitrant destitution, prison, and exile, sometimes even physical annihilation. 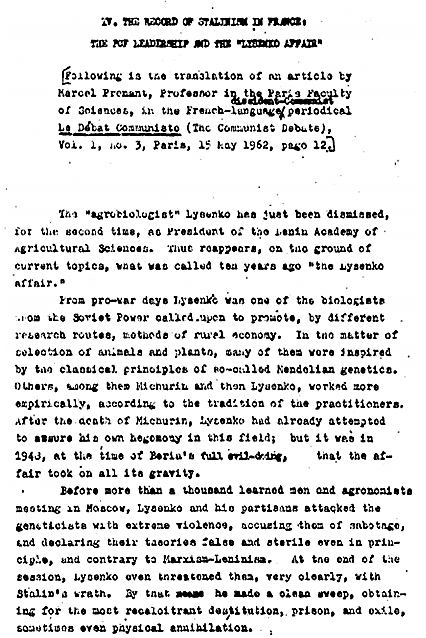 As an example of how persistent and pervasive Lysenkoism was, Readex’s Morality and Science database includes articles showing how even after the collapse of the Soviet Union, twenty-five years after Khrushchev was deposed and Lysenkoism disavowed, the country was still struggling with it.

“The basic idea is to record the truth, no matter how cruel or frightening it may be. After all, truth will come in useful—eventually.…”

Moscow’s New Times describes how in 1988 committees were formed to carry out damage control:

In May of this year, a joint decision of the USSR Academy of Sciences, the Academy of Medical Sciences, and the Agricultural Academy set up a committee to study the history of genetics in the Soviet Union. One of the tasks of the committee is to assess the damage that “People’s Academician” Lysenko and his henchmen inflicted on Soviet science.

Scientists were still being rehabilitated in 1988:

A native of Belorussia, Anton Romanovich Zhebrak, attended courses for improving soviet and party workers in Moscow in 1919. There he was fortunate enough to hear Vladimir Illich Lenin. Subsequently, Anton Romanovich retained his ideological inflexibility through the tempests of civil war and the 1930s-1940s, when he courageously defended the work of outstanding Soviet geneticist N.I. Vavilov in the struggle against Lysenkoism and throughout his entire life. 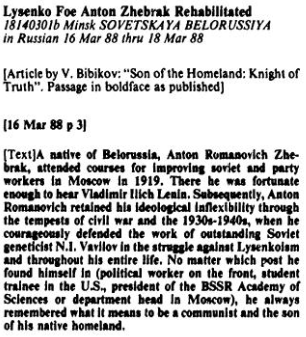 In Pravda we read how suppressed artifacts from 1955 were still coming to light in 1989:

Interest in the personality of the outstanding Soviet physicist Igor Vasilyevich Kurchatov has not abated. No matter how much has been written about him before, time and history reveal ever newer unknown pages in his biography. Even his personal files still hold secrets.

With this publication we would like to describe one side of this multifaceted leader little known to the general audience—physicist Kurchatov’s struggle with Lysenkoism. 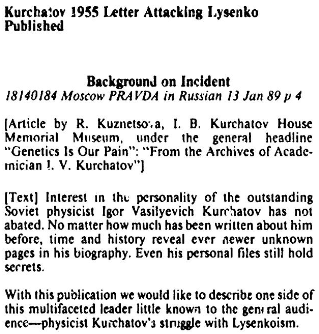 The “brain drain” that Lysenkoism precipitated was still casting a pall over Russian science in December 1990:

According to preliminary data, today 3 million people are potentially ready to leave the USSR. These are people of different nationalities and occupations, from various strata of the population, and with a different level of education. Unfortunately, those fellow citizens of ours, whose departure from the country will entail a number of negative consequences for the development of society and its culture and science, constitute a considerable share of them. In just seven months of this year more than 230,000 people emigrated. If we do not stop and do not begin if only somehow to regulate this outflow, the losses may become irreplaceable. 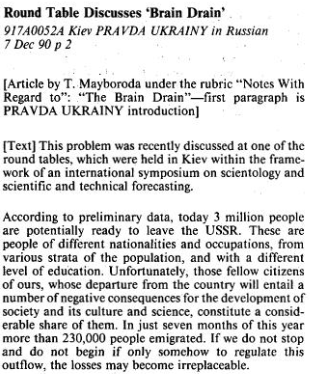 Being unable to compete with the West was bad enough, but Lysenko’s deception grew even more pernicious when it was adopted by China in 1949. In the following excerpt from Sheng-wu-hsueh T'ung-pao (Biology Bulletin), No. 10, October 2, 1959 the author writes of I.V. Michurin, the researcher in relation to whom Lysenko cast himself as a protégé.

External environmental conditions have been merely looked upon as an “inducing action,” Morgan firmly believes that any modification of the organism is a change which has occurred from within the basic substance of the organism itself and is not of a predetermined nature.

Therefore this problem is still a matter of controversy. However, results culled from the vast amount of research material have proved the accuracy of this particular viewpoint in Michurin’s theory. 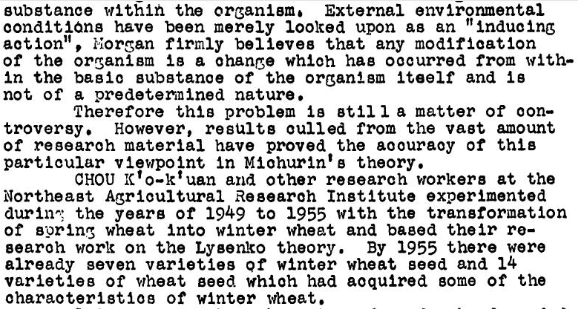 So the seeds of Chinese famines during the “Great Leap Forward” were literally planted and cultivated in Soviet soil.

During the Medieval period of European history alchemists tried to change lead into gold without success. Technically, according to modern atomic theory this is possible but it’s completely impractical. So too Lysenko’s “soft” genetics. Over millennia consistent adaptation to such strictures as Lysenko introduced might result in mutations and perhaps produce a superior genetic strain. In the short term, however, despite Stalin’s insistence on the superiority of Soviet science and morality such claims were a dangerous charade.

Lysenko’s winter wheat could not be transmogrified into spring wheat through the incidental exposure to cold; vernalization was at best a long-term biological adaptation. At worst it was a political ploy to spin famine into plenitude. In this simple fact lay the downfall of Soviet agriculture and the correlative inability of Stalin to feed his own people. Certainly other factors such as the failure of central planning and the decimation of the kulaks contributed to the ruin of the Soviet economy. But Lysenkoism was perhaps the original sin against causality that doomed the communist experiment at its outset.

To learn more about making Morality and Science: Global Origins of Modern Bioethics available at your institution, please contact Readex.