The April release of Black Authors, 1556-1922: Imprints from the Library Company of Philadelphia includes several autobiographical tales of danger and adventure. In these highlighted works, the authors describe foreign travels—to St. Petersburg in time to witness the Decembrist Revolt, to the Indian Ocean aboard a whaling vessel, and to war-torn Crimea on a mission of mercy. 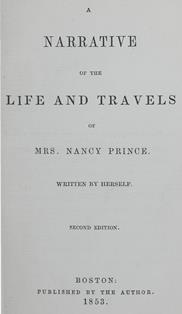 A Narrative of the Life and Travels of Mrs. Nancy Prince (1853)

Although born free in Newburyport, Massachusetts, Nancy Prince’s life was not without struggle. Her father died when she was an infant, and her mother soon remarried. Sadly, her stepfather also died during Nancy’s childhood which led to her mother’s emotional breakdown and left the family on the brink of poverty. She and her siblings picked and sold berries to support themselves and their mother before Nancy found work as a servant.

In 1824, Nancy married Nero Prince, a Mason Grand Master, and her life changed dramatically. They traveled to Russia where her husband worked as a footman at the court of the czar in St. Petersburg. About her audience with Czar Alexander, Nancy Prince wrote:

The Emperor Alexander, stood on his throne, in his royal apparel. The throne is circular, elevated two steps from the floor, and covered with scarlet velvet, tasseled with gold; as I entered, the Emperor stepped forward with great politeness and condescension, and welcomed me, and asked several questions; he then accompanied us to the Empress Elizabeth; she stood in her dignity, and received me in the same manner the Emperor had. They presented me with a watch, &c. It was customary in those days, when any one married, belonging to the court, to present them with gifts, according to their standard; there was no prejudice against color; there were there all casts, and the people of all nations, each in their place.

Prince also wrote of two disasters, one natural and one manmade, which she witnessed while living in St. Petersburg. In 1824, when St. Petersburg flooded, “the water rose sixteen feet in most parts of the city,” and claimed thousands of lives. Just over a year later, Prince witnessed the Decembrist Revolt in which several thousand soldiers gathered in the Senate Square in protest of Nicholas I’s assumption to the throne. The protesters refused to disperse and were fired on by soldiers loyal to Nicholas I. Prince wrote this of the carnage:

The scene cannot be described; the bodies of the killed and mangled were cast into the river, and the snow and ice were stained with the blood of human victims; as they were obliged to drive the cannon to and fro in the midst of the crowd, the bones of those wounded, who might have been cured, were crushed. 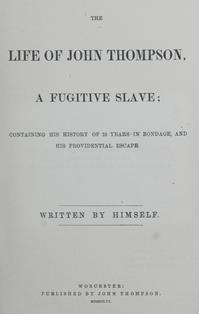 The Life of John Thompson, a Fugitive Slave; Containing His History of 25 years in Bondage, and His Providential Escape (1856)

John Thompson, born into slavery on a Maryland plantation in 1812, witnessed and endured horrific cruelty and violence.

He described being punished for nothing more than leaving the presence of a white man without consent: “Without saying what he wanted of me, he stripped off my clothes and then whipped me, beating me over the head until I became senseless, and life was nearly extinct. I was carried to my mother’s quarters, where I lay five weeks, unable to move without assistance.”

Thompson eventually escaped to the North and, to avoid capture as a fugitive slave, found work as a steward aboard a whaling ship destined for the Indian Ocean. After describing the killing of a whale, Thompson—perhaps alluding to the vicious mistreatment he witnessed of a slave named Ben, described earlier in vivid detail—writes:

The whale is a monster, terrible in his fury, but harmless when left alone; able to shiver the boat in atoms by one stroke of his tail, and when in agony roaring like a lion in the forest. 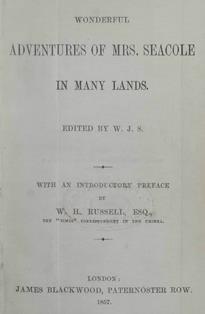 Wonderful Adventures of Mrs. Seacole in Many Lands (1857)

Mary Seacole was born in Jamaica of Scottish and Creole descent in 1805; her autobiography is one of the earliest by a mixed-race woman. At the outset of the Crimean War, Seacole offered her assistance as a nurse to the British War Office but was declined. She applied to the Crimean Fund for a sponsorship to travel to Crimea, but again failed to find support. In 1855, using her own resources, Seacole embarked for the City of Balaclava where she would open her “British Hotel” which she described as “a mess-table and comfortable quarters for sick and convalescent officers.”

Seacole was posthumously awarded the Jamaican Order of Merit and later voted the greatest black Briton. During her life she was lauded by the Adjutant-General of the British Army in Crimea as having “frequently exerted [her]self in the most praiseworthy manner in attending wounded men, even in positions of great danger.”

According to Seacole, “The simple meaning of this sentence is that, in the discharge of what I conceived to be my duty, I was frequently ‘under fire.’” She then described one such close call:

But putting aside the great engagements, where I underwent considerable peril, one could scarcely move about the various camps without some risk. The Russians had, it seemed, sunk great ships’ guns into the earth, from which they fired shot and shell at a very long range, which came tumbling and plunging between, and sometimes into the huts and tents, in a very unwieldy and generally harmless fashion. Once when I was riding through the camp of the Rifles, a round shot came plunging towards me, and before I or the horse had time to be much frightened, the ugly fellow buried itself in the earth, with a heavy “thud,” a little distance in front of us.