Key Titles in African American Periodicals, 1825-1995: Part One of Three

African American Periodicals, 1825-1995, reflects more than a century and half of the African American experience. The first collection in Readex’s new America’s Historical Periodicals series, this wide-ranging resource features more than 170 titles from 26 states. Below is a brief description of seven of these publications. For descriptions of fourteen others, please visit the Key Periodicals page on the Readex website. 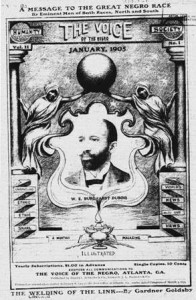 The Voice of the Negro (Atlanta, Georgia) A literary journal aimed at a national audience of African Americans, The Voice of the Negro was published from 1904 to 1907. It published writings by Booker T. Washington, as well as a younger generation of black activists and intellectuals, including W.E.B. Du Bois, John Hope, Kelly Miller, Mary Church Terrell and William Pickens. It also featured poetry by Paul Lawrence Dunbar, James D. Corrothers and Douglas Johnson. 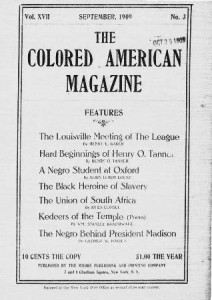 The Colored American Magazine (Boston, Massachusetts) One of the most prominent vehicles for black intellectual, artistic, and political expression during the first decade of the 20th century, The Colored American was edited by Pauline Hopkins, African American novelist, playwright and journalist. The magazine’s masthead read: “An Illustrated Monthly Devoted to Literature, Science, Music, Architecture, Facts, Fiction, and Traditions of the Negro Race.” 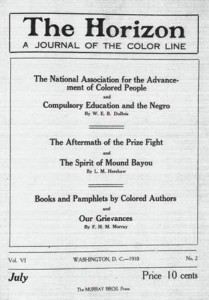 The Horizon: A Journal of the Color Line (Washington, D.C.) Edited by W.E.B. Du Bois, The Horizon was the precursor to The Crisis—Du Bois’ groundbreaking publication for the National Association for the Advancement of Colored People. However, The Horizon was a very different publication in that it functioned as an aggregator of news from other sources, as well as an outlet for its editors’ views. It had three main sections: “The In-Look” was a digest of the “Negro-American press,” “The Out-Look” was a digest of the periodical press, and “The Over-Look” was a digest of opinions and general catch-all for books, political discussions, and the views of Du Bois and his editors. It ceased publication in 1910 when Du Bois started The Crisis. 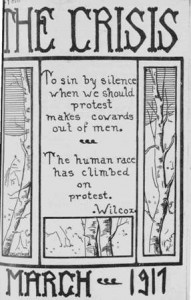 The Crisis: A Record of the Darker Races (New York, New York) The official magazine of the National Association for the Advancement of Colored People (NAACP), The Crisis was founded by W.E.B. Du Bois in 1910 and is widely considered one of the most important African American publications of the twentieth century. Primarily a current-affairs journal promoting the NAACP's liberal program of social reform and racial equality, The Crisis also included poems, reviews and essays on culture and history. “The object of this publication,” Du Bois wrote, “is to set forth those facts and arguments which show the danger of race prejudice, particularly as manifested today toward colored people. It takes its name from the fact that the editors believe that this is a critical time in the history of the advancement of men.” 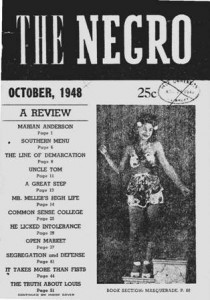 The Negro: A Review (St. Louis, Missouri) Billed as “America’s Best Negro Monthly,” The Negro: A Review contained articles, illustrations, advertisements and short stories. Edited by Frederick Bond in St. Louis, it was one of the only general interest African American magazines published in the Midwest during World War II. 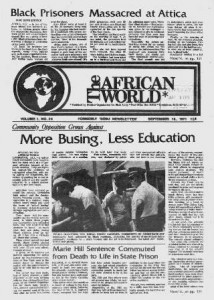 The African World (Greensboro, North Carolina) Published first by the Student Organization for Black Unity, The African World described itself as the “Voice of the Revolutionary Pan-African Youth Movement in the Americas.” It contained articles and photographs covering civil rights, the youth movement, prison abuse, and the exploitation of African American workers. Its founders later helped form, and publicize, the February First Movement, the civil rights group named for the date in 1960 when four African American students asserted their right to sit at a Woolworth’s lunch counter in Greensboro, North Carolina. 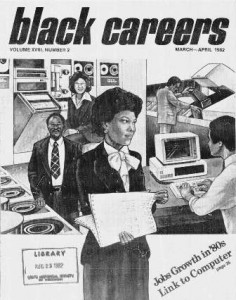 Black Careers (Philadelphia, Pennsylvania) A bi-monthly journal that did much to educate African American job seekers about the importance of Equal Opportunity Employment legislation, Black Careers contained articles on employment trends, educational opportunities and discrimination in employment. It was also popular with teachers in inner city schools due to its profiles of role models from the African American business community. • Includes issues published between 1977 and 1982 For more information about African American Periodicals, 1825-1995, please write to readexmarketing@readex.com. To request trial access for your institution, please use this form.