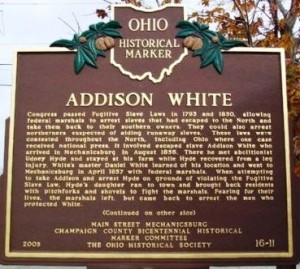 Mechanicsburg, Ohio is a really small place today—less than 2,000 people—so imagine what the population would have been in 1857. But this little community was the site of an event that lead to a federal court case to determine the constitutionality of the Fugitive Slave Act.

Many local students knew vaguely of the story of Addison White, a runaway slave from Kentucky. His master tracked him to Mechanicsburg and sent slave catchers to bring him back. No one expected the townspeople of Mechanicsburg to arrive with pitchforks and carpet beaters to chase the slave catchers away. 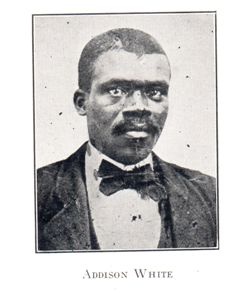 Addison White left town quickly via the Underground Railroad; the stationmaster who had harbored him, Udney Hyde, also disappeared for almost a year. But the slave owner went to court to get an arrest warrant, and federal marshals were sent back to Mechanicsburg in search of White and Hyde. When they discovered they had already left town, the federal marshals arrested four other Mechanicsburg residents and headed to Cincinnati. A flurry of writs of habeas corpus ensued; bullets were exchanged at locations in Champaign, Clark and Greene Counties, leaving a sheriff's deputy wounded. 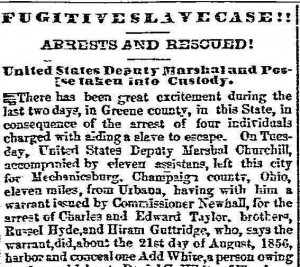 As a result of the research our history students did using The Civil War, our theatre students and faculty were able to create a Readers Theatre piece that was shared with more than 150 people from our campus and community. Student readers read the text from the newspapers to recreate the events, and they asked the audience to vote about which newspaper reports represented their views. Were the marshals justified in arresting the wrong citizens? Were the citizens of Mechanicsburg justified in defying the Fugitive Slave Act? 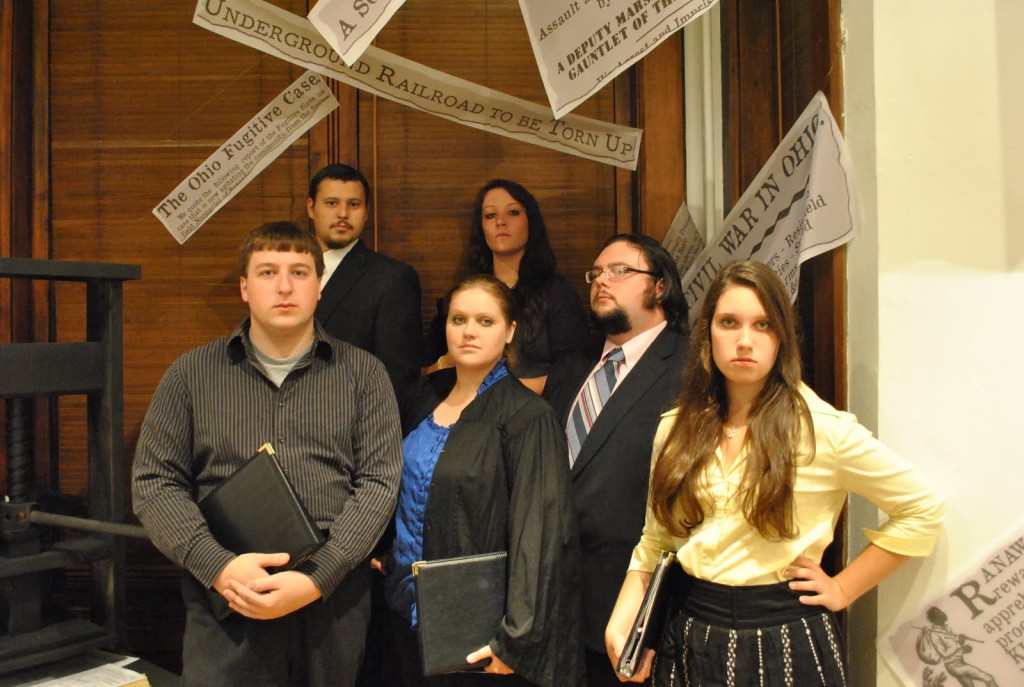 The Urbana University cast of "Law and Disorder"

“The Civil War: Antebellum Period to Reconstruction was extraordinarily useful for our research on the Underground Railroad in Ohio. In particular, it allowed us to track the Addison White story as it was reported throughout the country, and it gave students access to competing interpretations of events in Ohio in 1857. One student wrote a seminar paper focused on how the Addison White case was reported around the country, while another wrote a short play about the court proceedings, using direct quotes from the newspapers for dialogue!

“Additionally, the database allowed us to put the Addison White case in national perspective, coinciding as it did with the Supreme Court's ruling on the Dred Scott case. Indeed, we found that readers throughout the nation received detailed accounts in their newspapers of events in and around what we had assumed to be the sleepy little hamlet of Mechanicsburg, Ohio. In sum, the ability swiftly to locate these stories (i.e., without traveling to far-flung archives), thus broadening our understanding of the importance of the Addison White case, proved invaluable.” 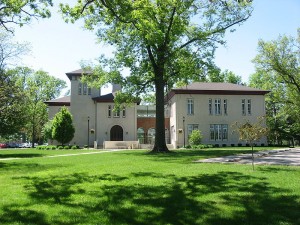 Ultimately, the information provided by The Civil War: Antebellum to Period to Reconstruction enabled our students to conduct primary source research without extensive travel or time delays waiting for microfilm reels to arrive through interlibrary loan. It allowed our students to see a historical event reveal itself as they moved from one report to the next. And by using the Readers Theatre format to share the story of Addison White, they demonstrated their learning and understanding of the complex case in a unique way.