[This post by James McGrath Morris, author of Pulitzer: A Life in Politics, Print, and Power (HarperCollins, 2010), first appeared in the November 2010 issue of The Readex Report.]

The most revolutionary change in biography writing is the advent of digitized newspapers. Unlike microfilm, which simply reproduced newspapers on film, these new electronic records provide what we biographers and historians have long dreamed for—a means of finding a needle in the haystack. Let me explain. For years folks like me have been using the great newspaper collections in our nation’s libraries, archives, and other repositories. The contemporaneous accounts are like gold. But as with the pursuit of this precious metal, we have not been able to mine all of it. In fact, using our previously inadequate research tools, many of the best veins have remained untapped. Essentially our choice was to read every page of a newspaper’s run or use dates to guide our research. 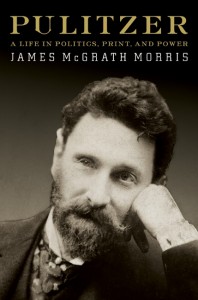 So, for instance, if I wanted to discover what was said about a particular artist, I might have looked at issues of a newspaper published around the opening date of an exhibit. But if an art critic wrote a review several weeks later, the likelihood was that I would miss it. Lacking dates, I could alternatively turn to a newspaper index such as the one produced by the venerable New York Times. However, unbeknownst to many researchers, this index is not complete. In keeping with the newspaper’s motto “All the News Fit to Print,” its indexers only included those items they judged fit to be indexed. A lot never earned a reference. So without a date or without an index entry, the millions of pages of newspapers have remained as inaccessible to writers as the Manhattan white pages would be if one had little more than a first name—a lot of great information, but unreachable. Digitized collections, such as America’s Historical Newspapers, have turned what was once a research nightmare into a writer’s dream. Now, with the stroke of a few keys, we can unearth valuable information. For example, I often share a problem similar to the kind that frequently frustrates detectives. They have a suspect and motive but can’t place the person at the scene of the crime. In my case, I knew the subject of my research, Joseph Pulitzer, had the means and the desire to acquire a New York newspaper. But I wanted to know when he was in the city so I could document his pursuit. In Pulitzer’s time, newspapers published lists of people staying in prominent hotels. Subscribers loved this feature because they could learn that an old friend was in town and they could stop by the hotel to leave a calling card. But newspapers chose not to index what seemed to them an inconsequential fact. Digital collections of papers unlock these hotel listings in a few seconds. Now I could place my guy at the scene. I also learned that Pulitzer frequented New York’s Fifth Avenue Hotel, thereby revealing something about his taste in lodging. In his age, where one stayed said a lot about one’s self. Here’s what I did in my book with this minor bit of information: By the 1870s, however, newer hotels eclipsed the Fifth Avenue. “The hotel, for all its sober state, was no longer fashionable,” lamented Edith Wharton in her novella New Year’s Day. “No one, in my memory, had ever known anyone who went there; it was frequented by ‘politicians’ and ‘Westerners,’ two classes of citizens whom my mother’s intonation always seemed to deprive of their vote by ranking them with illiterates and criminals.” This is the kind of color we dream of being able to offer readers. Other times these newspaper searches provide color that breathe life into our books. For instance, I searched for news about Pulitzer and the Jefferson Davis family because he married Kate Davis, a distant cousin of the man who had served as President of the Confederacy. I learned from the Macon Telegraph of August 19, 1888 that Winnie Davis, known as the “Daughter of the Confederacy,” was staying with the Pulitzers in Bar Harbor, Maine through October. Certainly her presence in the backdrop added add irony to my depictions of Pulitzer’s many meetings with important Yankee politicians and editors who journeyed to Maine for an audience with this powerful newspaper publisher.

Notice which newspaper I cited in the previous paragraph. Not to cast aspersion on Macon, Georgia, but its newspaper was not a giant of the era. Yet it is for that very reason—the inclusion of hundreds of newspapers of this kind—that America’s Historical Newspapers is so valuable. These diverse small-town papers from all 50 U.S. states often contain valuable news accounts not found elsewhere. For instance, the major newspapers of the time often trimmed Associated Press dispatches because of the competition for space. The smaller newspapers frequently ran the entire dispatches. For that reason, a smaller newspaper may be the only place one can read an entire, unedited AP account of an event in New York or Chicago. But aside from locating hidden information, providing color, and giving us access to complete AP reports, the digitization of newspapers is also altering our interpretation of the past in other consequential ways. Researchers frequently make the anachronistic mistake of presuming that today’s dominant newspaper was the dominant one of the past. Yet this is often not the case. The New York Times had a smaller staff and covered less news than its rivals a century ago. And the Washington Post, famous for bringing down a President in the 1970s, played second fiddle to the Washington Star prior to the 1960s. The digitization of newspapers goes a long way in eliminating this bias and, in a sense, leveling the playing field by bringing forth the more accurate and complete first drafts of history.

About the Author
James McGrath Morris spent five years working on Pulitzer: A Life in Politics, Print, and Power (HarperCollins, 2010). Reviewing Pulitzer in The Washington Post Book World, Jonathan Yardley wrote in March: “There have been other biographies of Pulitzer. . . but James McGrath Morris’s is the best. It is authoritative, lucid and fair to its complicated subject.” Morris’s previous books include The Rose Man of Sing Sing: A True Tale of Life, Murder, and Redemption and Jailhouse Journalism: The Fourth Estate Behind Bars. He is also the editor of the monthly Biographer’s Craft and one of the founding members of the Biographers International Organization.