Local Intelligence: Exploring the Past of My Adopted Hometown 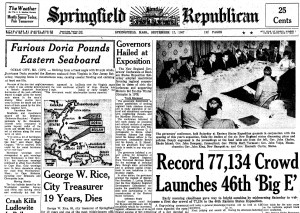 Memories take many forms: stories of an older person, memorabilia preserved in a scrapbook, and even creative wonderings piqued by the sight of an old building. Reminiscences like these offer initial clues to local history, and—in my continual quest to learn more about my adopted hometown—I scour books, nose into diaries, sift through old records, and talk to long-time residents. In the end, electronic archives of local newspapers can provide a more complete chronicle. Years ago, my grandmother gave me a menu she had preserved from a luncheon date in 1915 at Springfield’s Hotel Kimball.  Lobster cutlet for 40 cents and apricot farina pudding for 15 cents were a sampling of the intriguing delicacies offered. When I discovered a 1911 article in the online archive of the Springfield Republican and Union describing the new hotel in town, I better understood what a dazzling dining experience it must have been for a 17-year-old girl:

Representing an outlay of approximately $1,000,000, the Kimball stands as an example of all the latest ideas in hotel evolution….Everywhere there is splendor, yet it is splendor with refinement. (Springfield Republican, March 18, 1911)

The rose and gray décor of the dining room where Grandma had eaten lunch was illuminated by Roman gold chandeliers. Details of mahogany doors, marble counters, satin walnut furniture, and silk-covered walls were examples of the elegance throughout the eight-story hotel. 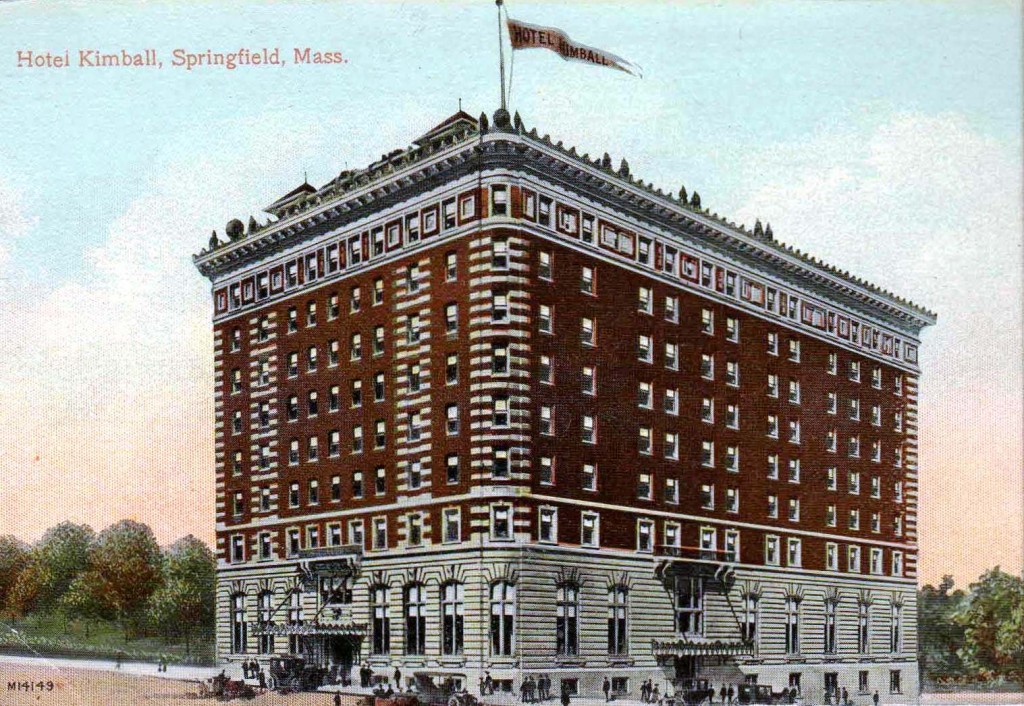 There is no sample menu from Springfield’s Canton Restaurant in my collection, but the long-lasting reputation enjoyed by the city’s once-favorite eatery speaks for itself. Everyone loved The Canton. Well, everyone except Ng Hok Yeong, and it is fortunate that he has been forgotten by subsequent generations. According to the Republican (Sept. 13, 1915), on an otherwise quiet Sunday, Canton patrons were horrified to see him burst into the restaurant wielding a revolver which he fired deliberately at the proprietor’s son, Ng Hong. Hong was the perpetrator’s third victim that day. 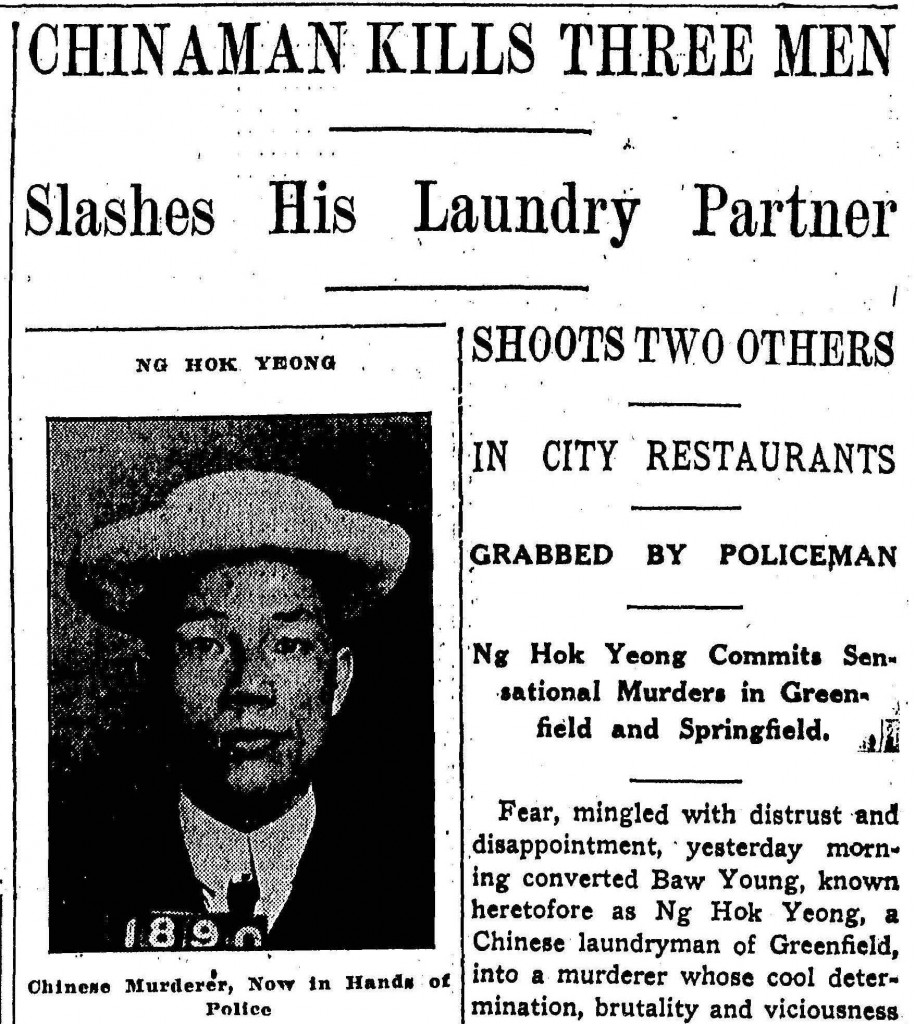 All were cousins who had declined to help finance Mr. Yeong’s legal defense against charges of illegal immigration. Justice was swift. Officer Michael Kennedy apprehended the gunman as he fled the restaurant, and, he was sentenced the following spring to life imprisonment. Ironically,

...a pathetic feature of the case was that the proceeding against him was decided in his favor and that his fears of being sent back to China which had roused him to fury against his victims were groundless. (Springfield Republican, May 19, 1916)

A friend’s recollections about her former boss sparked my interest in researching pioneers of local aviation. The employer’s wife was a Springfield legend: Maude Irving Tait, a school teacher who had taken to the skies as a young woman. A front-page story in the Republican (August 17, 1929) told of her daring soar to New England’s highest elevation of 18,000 feet:

After the flight she declared she could have gone higher but had been warned against doing so without oxygen apparatus. 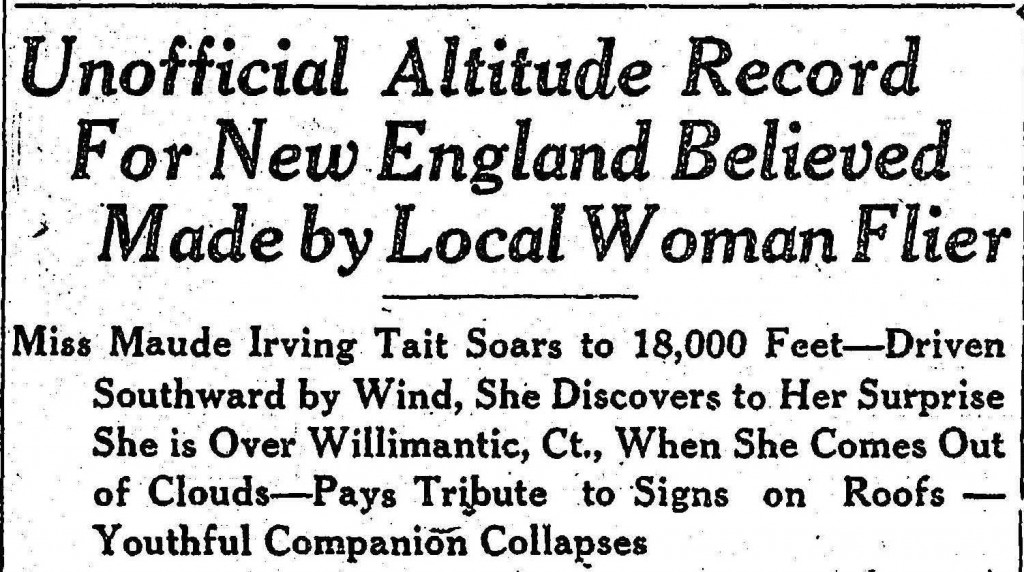 Her 16-year-old traveling companion Charles Percy had “collapsed when she reached the 18,000-foot level and did not revive until she had brought her plane out of the clouds at an altitude of 5000 feet over Willimantic, Ct.” Although the young Mr. Percy had not been able to make note as planned of meteorological measurements at the high altitude, he expressed pride that he was one of the few youngsters to have reached such heights. Another tidbit of memory that coaxes exploration is the claim periodically touted by Springfield’s city leaders: Clarence Birdseye’s decision to test market his innovative frozen foods in our stores in 1930. Until the search engine of local newspaper archives made fact finding so simple, that boast seemed to be the extent of information at hand. A full-page ad in the March 2, 1930 issue of the Springfield Sunday Union and Republican described the scientist’s observations of naturally frozen foods in Labrador and enumerated ten different Springfield stores that would offer the inventor’s own commercially frosted foods. 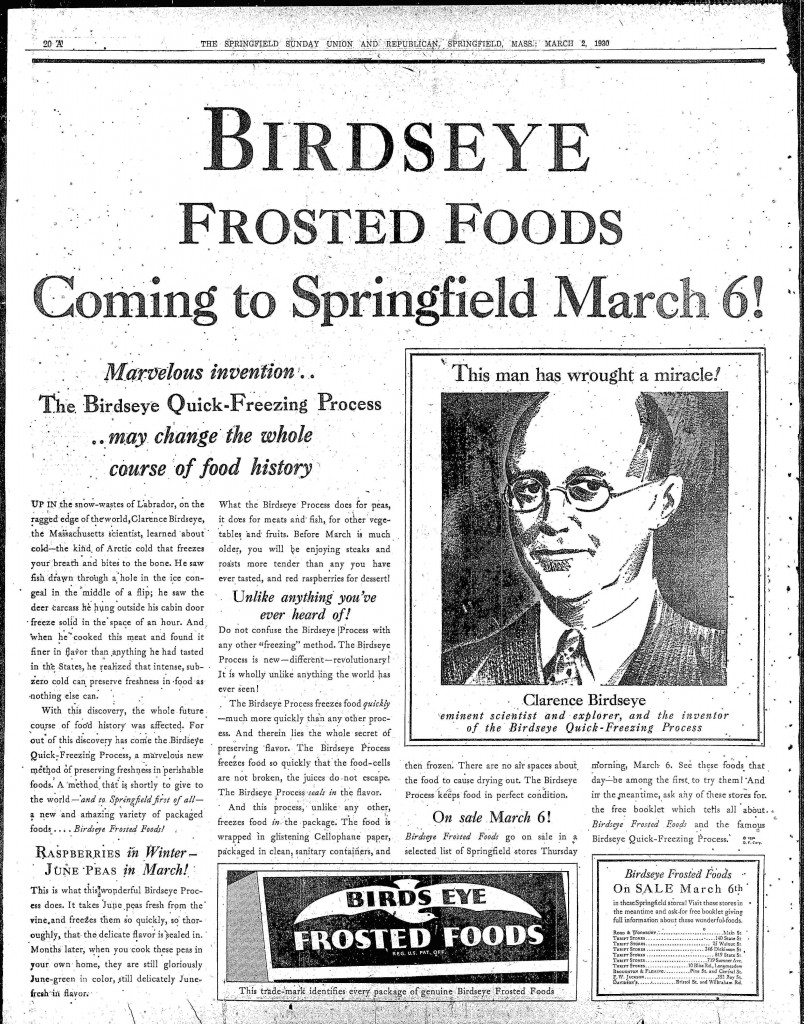 From the historical archive of the Springfield Republican and Union

It was reported 16 days later that Mr. Birdseye arrived in town to personally

As any American householder today can attest, the Birdseye trial run was a success. Whispers of bygone days seem to whirl around the ornate entrance to Springfield’s old Court Square Theater. As the 20th century entered its second decade, theaters on every block provided amusement unparalleled in western Massachusetts. Entertainment was available in vaudeville, burlesque, and “legitimate” theaters as well as new-fangled moving picture houses. Giants of the performing arts appeared regularly and were documented in the daily newspapers. On January 5, 1911, the Springfield Union proclaimed bookings at the Court Square Theatre in one month of Mme. Sarah Bernhardt on her last tour of America, young Douglas Fairbanks in a comedy “The Cub,” and George M. Cohan in his original play, “The Lovesick Kings.” 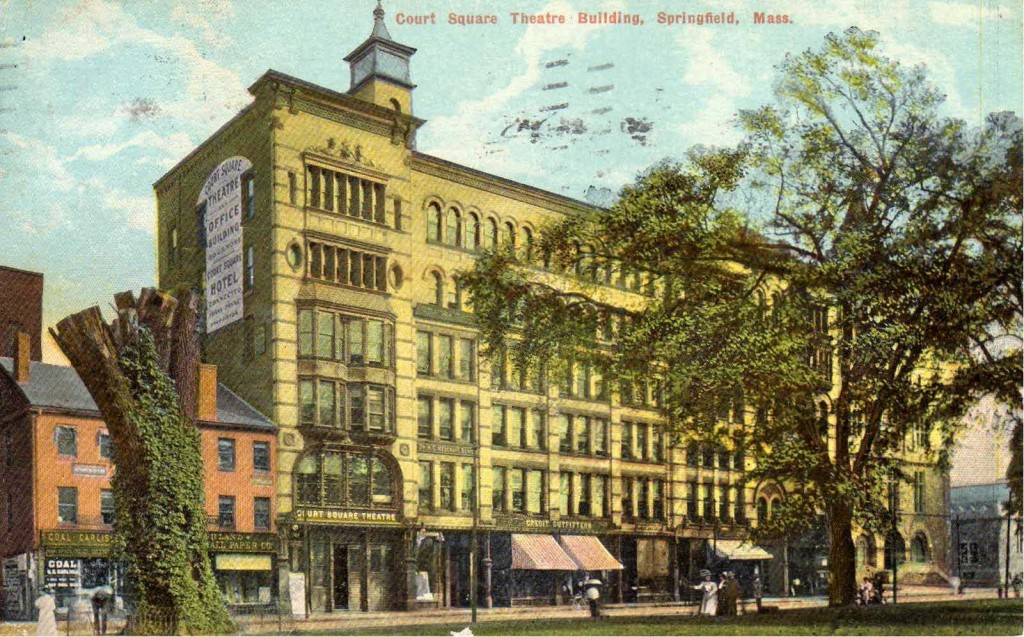 Readers of local papers were treated to detailed accounts of new theaters under construction. In a 1912 article about the Broadway on Bridge Street, the Springfield Union reported that:

to the men who have been behind the enterprise, there has never been the least doubt as to the ultimate building in Springfield of a theater that they say will be the handsomest in New England. (Sept. 23, 1912)

Likewise, when a once grand theater closed its doors, local researchers can count on finding a nutshell history of its fading glory in newspaper archives. A story in the Union (Oct. 30, 1969), preceding the demise of the Arcade Theater, added spice to the mix in reporting the manager’s arrest for showing the infamous film, “I am Curious, Yellow.” He was charged with “possession of an obscene print and presenting an immoral show.” In noting the show times in the previous day’s edition, it can be deduced that the vice squad felt compelled to view the first sitting in full and remain halfway through the second before completely assessing the offensive nature of the movie. 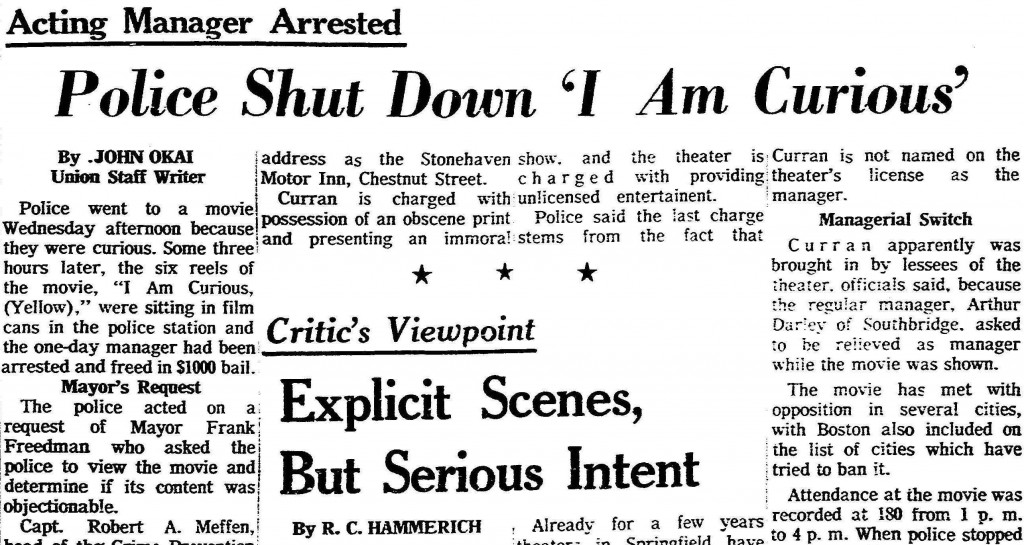 Whether memories come to us through the facades of old structures, oral tradition, bits of memorabilia, or some other happenstance, online newspaper archives have the power to lead the seeker of local history directly to a more comprehensive picture of the past. About the author Barbara Shaffer has been researching memories in Springfield, Massachusetts, since her college days. She speaks at historical societies, libraries, and schools and is presently compiling a collection of historical vignettes about the city she loves. Her forthcoming article titled “Loving the ‘City of Homes’…and its Historical Newspaper Archives” will appear in the April 2012 issue of The Readex Report. Follow her tweets of Springfield lore at www.twitter.com/SpfldHistorian.

American History
Trends in Database Use