One of the delights of the Early American Imprints, Series II: Supplement 3 from the American Antiquarian Society is the large number of rare, illustrated children’s books. The current release has many lovely examples. 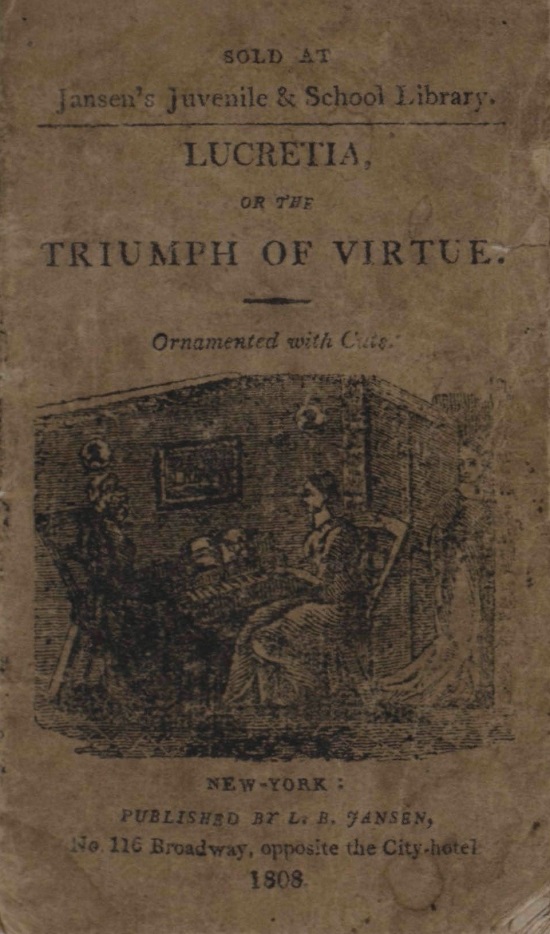 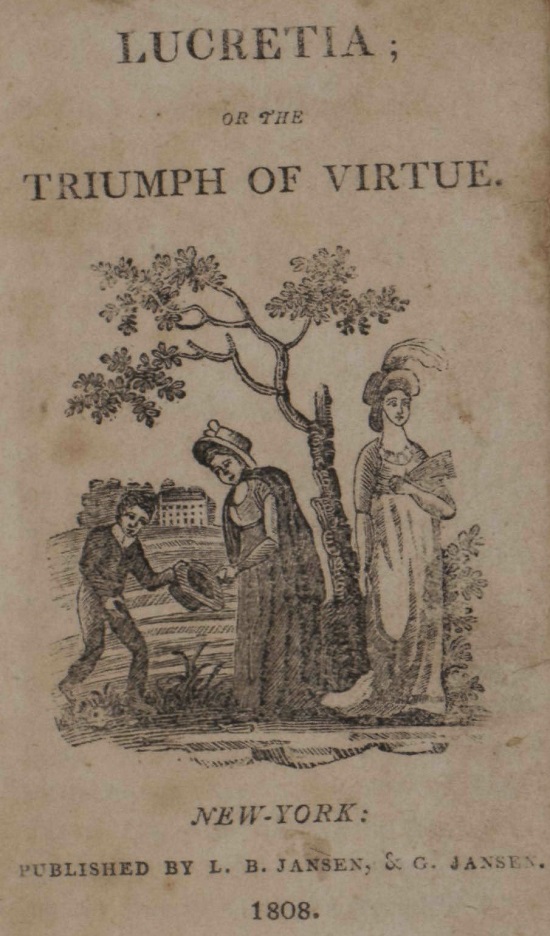 Clarissa and Lucretia Bellegrove were the daughters of a gentleman of large property. Nature had lavished on Clarissa a person so lovely, that the most refined judges of beauty could not discover any fault in her form or face; while Lucretia was very deformed and ugly, having a great hump upon her back, and a very disagreeable face. When the sisters were first introduced to strangers, Clarissa was surveyed with admiration, while poor Lucretia’s person excited nothing but disgust.

However, Clarissa “was so proud and haughty, that no one, when she was known to them, could love or admire her.”

Lucretia, on the contrary, had such a mild and amiable disposition, was so sweet-tempered, gentle, modest, and sensible, that her friends forgot the deformities of her person in contemplation of her mind.

As our tale begins, Mr. Bellegrove is anticipating a visit from his wealthy relative and “he resolved to leave no means untried to prevail on her [Clarissa] to disguise her temper before her uncle, whom he well knew had a great aversion to pride and petulance.” Clarissa laughed at his advice convinced her beauty would always win the day. As for Lucretia her father had other plans.

When Mr. Bellegrove had given his orders to Clarissa, he requested Lucretia to appear before him. “You are not insensible of the imperfections of your person, I believe, child,” said he. “No, Sir,” modestly replied Lucretia, “yet I have great cause to be very thankful to my Creator, who has given me a strong constitution and a contented heart.”—“You are a very good girl,” answered her father; “but as a little will suffice your wishes, and I am anxious to procure a splendid fortune for your beautiful sister, I must request, when our relation, Mr. Goldworthy, returns from England, you will confine yourself entirely to the apartments which open into the shrubbery, and never walk farther than the green wicket at the bottom of the south walk.”

She happily agreed to these conditions, and when the uncle arrived she was closed up with an elderly retainer who adored her and felt her father was wrong to hide her. The next morning this older woman saw Mr. Goldworthy in the garden and approached him. They walked to the village where the servant introduced him to cottagers who had been the beneficiaries of Lucretia’s quiet charity. The uncle demanded to be introduced to her.

Lucretia entered with a modest and sensible timidity.—Mr. Goldworthy at first thought her very ugly, but her interesting and charming conversation soon convinced him, that the beauties of her mind far surpassed those of her sister’s person, and he very soon forgot her bodily imperfections.

Mr. Goldworthy was repulsed by Clarissa’s vanity and her dismissal of charity and concern for those less well off than she, and so charmed by the self-effacing Lucretia that

As a reward for her goodness, he settled on Lucretia a very splendid income, which she expended in a manner which did honour to her heart; and at his death he left her an immense property, alleging in his will, he did it as a trifling memento (for he thought it only a comparative reward) of the high estimation in which he held her virtues.

In time Clarissa married a wealthy but dissolute man who squandered their fortune, reduced their way of living and died leaving almost nothing for his widow. Lucretia, who had married a relative of Mr. Goldworthy and was his primary heir. Naturally, they saw to Clarissa’s needs. The author concludes

…that, however loveliness may please for awhile [sic], virtue alone can gain the approbation of the sensible, and the favour of heaven. 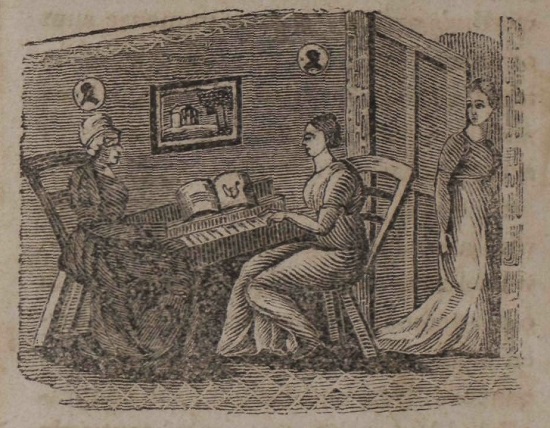 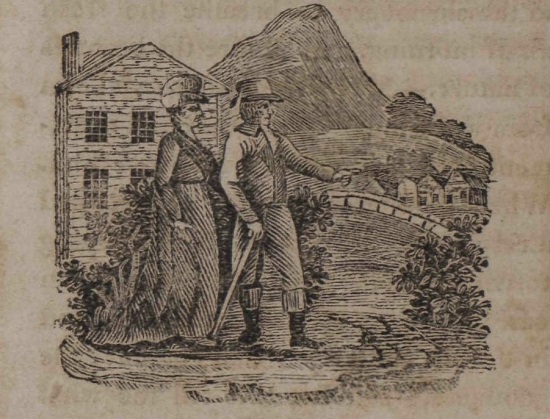 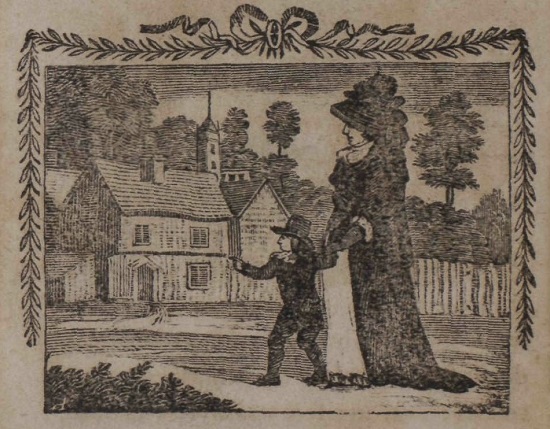 The History of Tommy Playlove and Jacky Lovebook: Wherein is Shown the Superiority of Virtue over Vice however Dignified by Birth or Fortune. Written by a friend (1804)

Tommy Playhouse was a very spoiled, naughty boy who had been indulged in every whim. Consequently, he tyrannized his family and all of the servants.

When Tommy had committed any fault, such, for instance, willingly breaking a china cup, throwing the hot tea in a maid’s face, or the like, if he received the slightest check for the offence, he would cry violently; then immediately his mamma, or those about him, for fear the baby should be too much vexed, endeavoured to appease him by telling him it was the cat or Bob, or Molly, (a poor boy and girl who were servants in the house,) and that they should be beat for it; and were so to please the child…

It becomes a painful task, however, to relate such very naughty incidents in the life of our hero; we shall therefore, beg leave to continue the history in another chapter.

Lady Playlove enrolls Tommy in a day school whose master, Mr. Syntax, met her demands that he not be punished. At school Tommy falls in with a group of other bad boys including Billy Wilfull, “an uncontrollable boy,” Tommy Hardy who “was never afraid to fight any boys, though of twice his own size, Bobby Scapegrace “who stuck at no mischief, if he could by doing it obtain an apple, a top, or any other trifle of that kind,” Dick Funny “an arch sly rogue,” and Ned Slippery, “an idle blockhead…” He made one other, surprising, friend, Jacky Lovebook who was bright, honest, diligent, and gentle.

Qualities such as these, together with his being a very sensible and witty boy, as has been before observed made him beloved by every body; so that the parents of all his schoolfellows were fond of him as a playmate for their sons.

Over time Jacky had a positive influence on Tommy who took to calling him Parson. But the path to Tommy’s better angel was rocky. The Table of Contents provides a preview:

CHAP. III — Some account of Master Lovebook and his family—Jacky is invited to Tommy Playlove’s house, their conversation at the teatable [sic], during which a disaster happens.

CHAP. IV — In which Tommy concerts a horrid plan of revenge on the poor foot-boy.

CHAP. VI — A great reformation—Tommy is again visited by his friend Lovebook—A conversation takes place very different in its nature from that in a former visit.

The Puzzling-Cap: A Choice Collection of Riddles, in Familiar Verse; with a Curious Cut to Each. To Which is Added, Description of the Swan and Good Boy (1806) 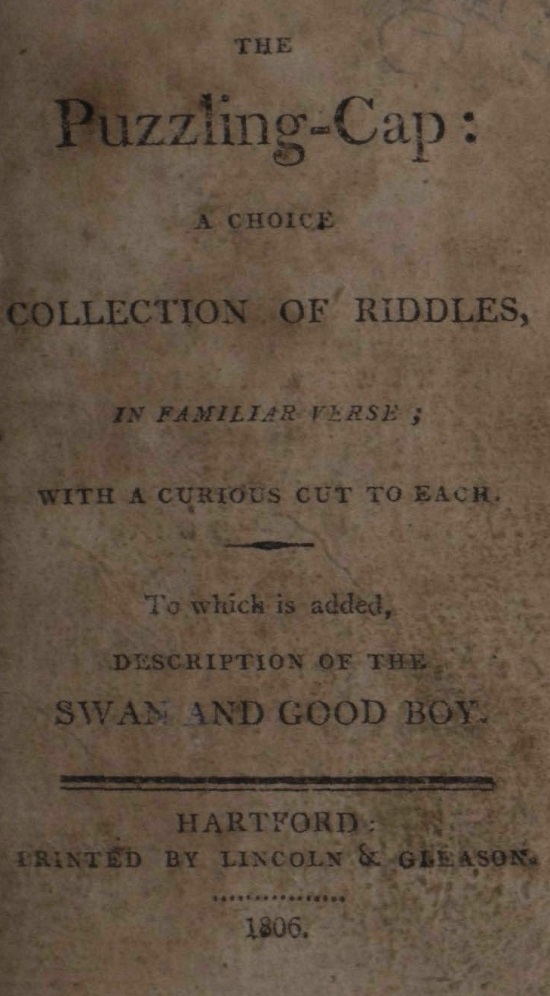 To All Little Masters and Misses Whose Heads It Will Fit.

This Puzzling-Cap Is Most Humbly Dedicated by Their Obedient Servant

This chapbook is fully illustrated with relief prints. Most of it is in verse including the riddles. See if you can solve these examples:

I thro’ the town do take my flight.

And thro’ the fields and meadows green,

And whether it is day or night,

I never was, nor can be, seen.

I view the world in little space,

Procure what millions do devour.

In Spring I look gay,

In Summer more clothing I wear;

When colder it grows,

I fling off my clothes,

And in winter quite naked appear.

Yet I’m as little’s a mouse.

With my red target near the house.

We dwell in cottages of straw,

And labor much for little gains,

Sweet meat from us, our masters draw,

And then with death reward our pains. 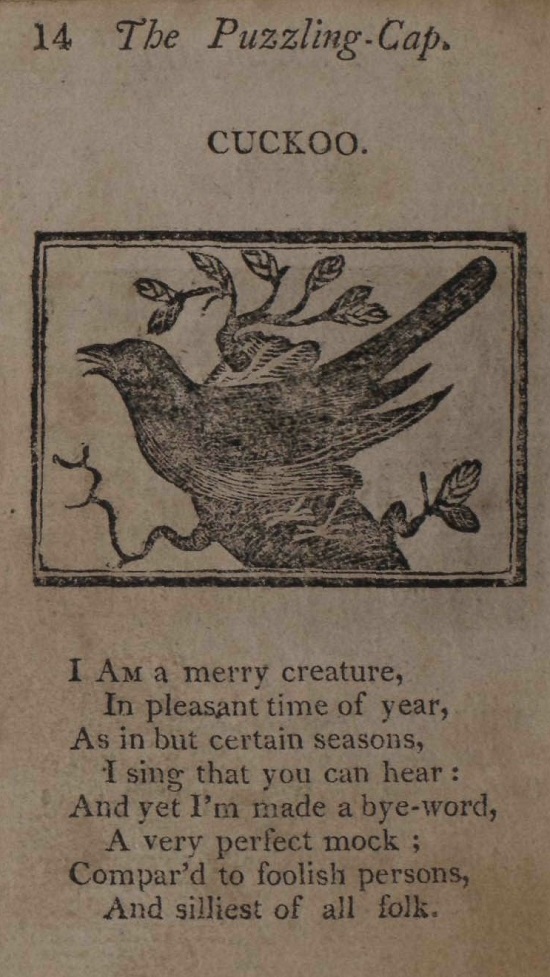 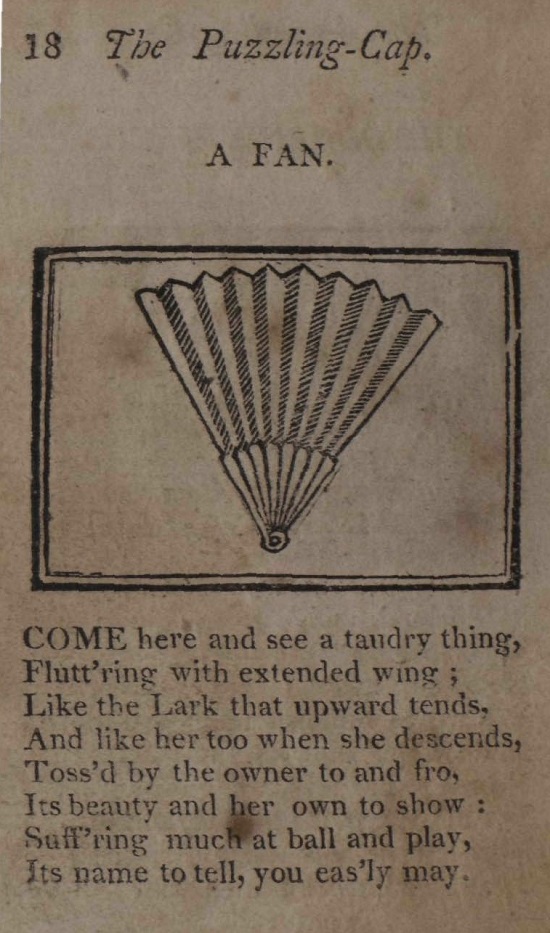 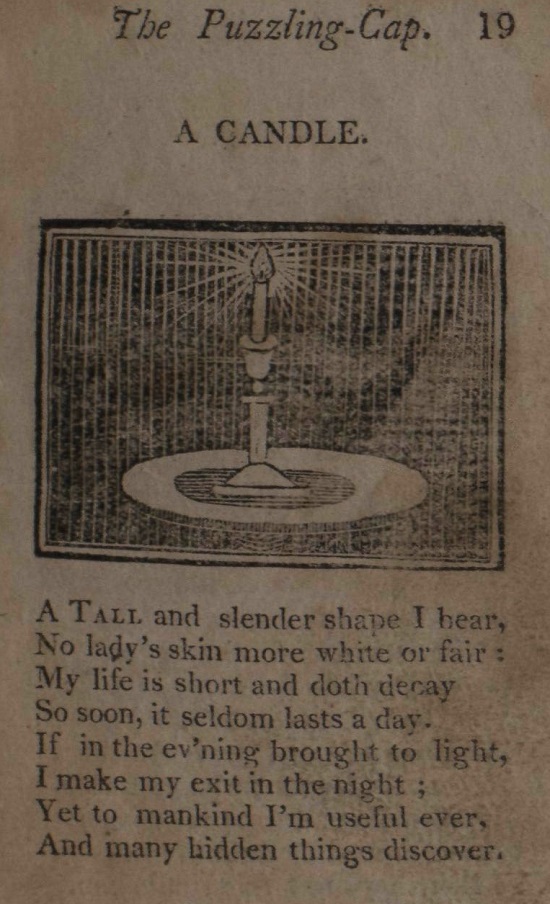 The book concludes with an essay describing the characteristics that every good boy displays. 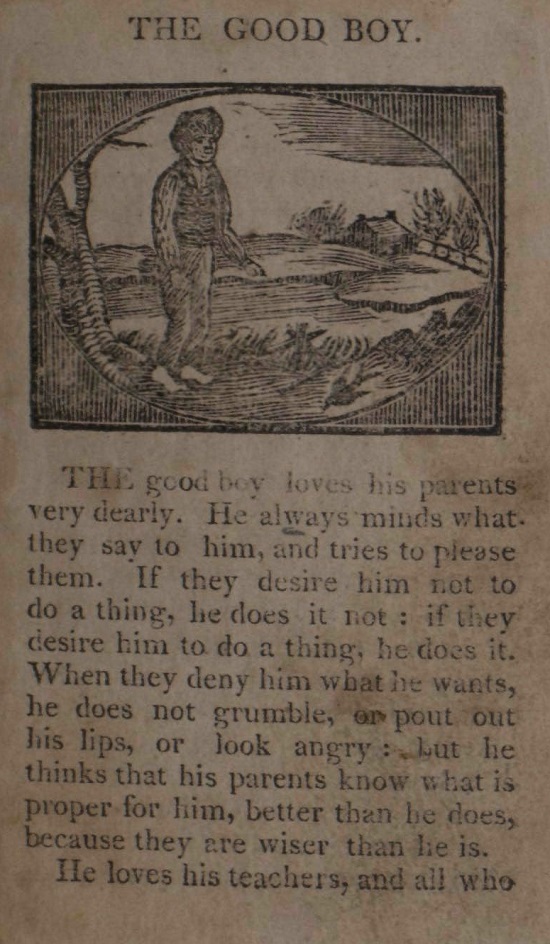