The Memphis Massacre of 1866: As Seen through Local News Coverage and a Government Report found in the Archive of Americana

In the century following the end of the Civil War, brutal assaults on black people and their neighborhoods by mobs of white people, often described as "race riots," were intended, in part, to blunt the demand for equal rights and to enforce white supremacy on former slaves. Another goal was to drive former slaves back to plantations and out of urban areas. The first of these large-scale attacks took place in Memphis, Tennessee, in 1866.

The terrible state of affairs, between the white and black races, which the teachings of the Radical extremists to the negro have caused the fear of, almost since the cessations of hostilities, commenced in our city about 6 o’clock yesterday, in serious and fatal earnest. The war began on South street, in the extreme southern portion of the Corporation. It originated from a difficulty between a white and negro boy, near the bridge over the bayou, on the street already mentioned. 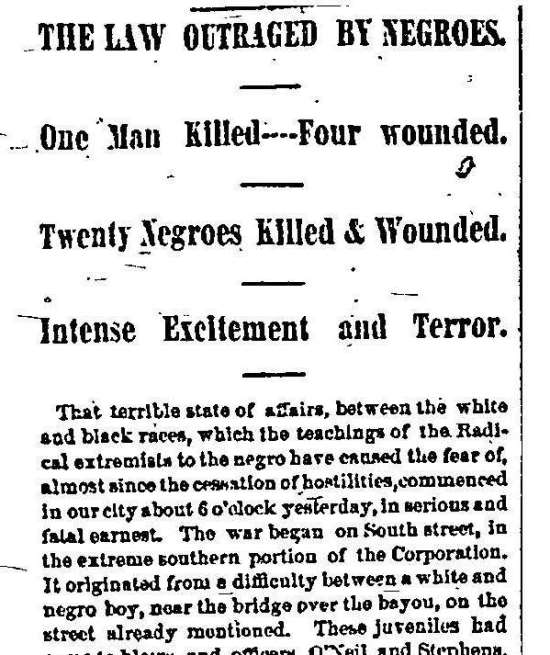 So begins the Memphis Daily Avalanche’s account of the opening day of the Memphis Massacre. This local coverage found in Early American Newspapers, an Archive of Americana collection, claims that two policemen went to separate the boys but were attacked by a crowd of fifteen to twenty men armed with pistols. The black men fired on the police, wounding one of them. Two other policemen joined the one who was not hurt and drove the men back.

In a few moments the black crowd became augmented considerably, and recommenced their devil’s work by firing at every white person they could see, whether policemen or not.

Mr. Henry Dunn, a fireman, was shot in the head. The Avalanche, which had demonized the black crowd, referred to Dunn this way:

Death came upon the noble young man, however, in its most sudden and terrible form—at the hands of beastly, lawless negroes. He weltered in his own gore, a victim of the hate which the African has been taught to bear towards the white man. 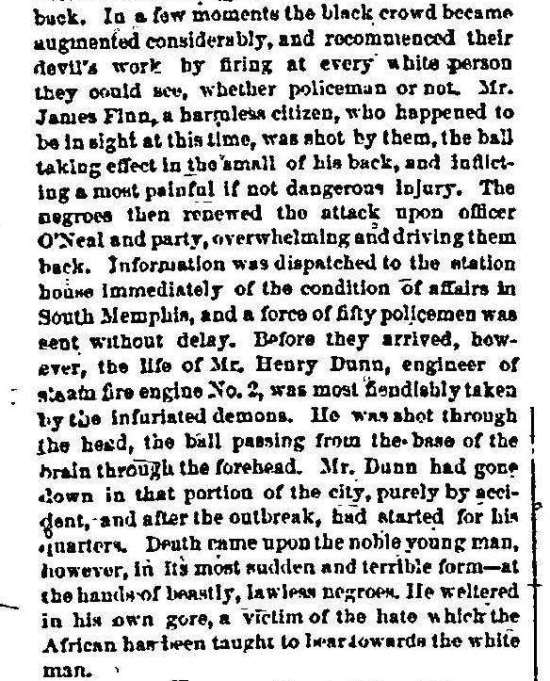 At our remove of a century and a half, the bias in this news coverage is easy to discern. Dismissing the effects of centuries of slavery, the Avalanche suggests it is Radical extremists who have taught hate to the freed slaves. As to the white police, the Avalanche says:

The police deserve the very highest credit for the gallant conduct they exhibited in enforcing the majesty of the law when the messengers of death were hurled at them on all sides. We may grumble a little at them sometimes for omission of trivial duties, but in hours like those of yesterday evening, our noble policemen are towers of might and purpose and courage.

The violence continued for two more days. Federal troops were finally called out to quell it. At the end of the massacre, 46 blacks were dead, as were two whites.

Churches, schools and houses in the black neighborhoods were burned down. 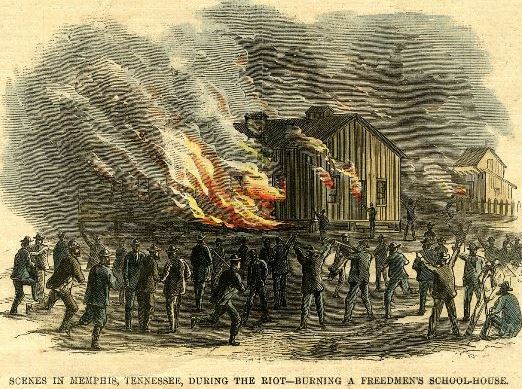 The Memphis Daily Avalanche continued to blame Radicals in the weeks that followed. Here, in an early piece of media criticism published nine days after its initial coverage, the Avalanche analyzed a report which a Memphis correspondent sent the Chicago Tribune. The Avalanche inserted brackets in its printing of the Tribune piece to identify 57 "lies." Its headline and opening paragraph tell the tale:

Fifty-seven Lies in One Letter Written from Memphis.

Memphis is the victim of the presence of numerous Radical writers, who are filling the Northern papers with maliciously false accounts of the late negro riots. We give a specimen from the Memphis correspondent of the Chicago Tribune, (Radical,) with figure heads and all. The enumeration of the lies in brackets is our own:

Inhuman Brutality of the Rebel Mob – [Lie No. 1] 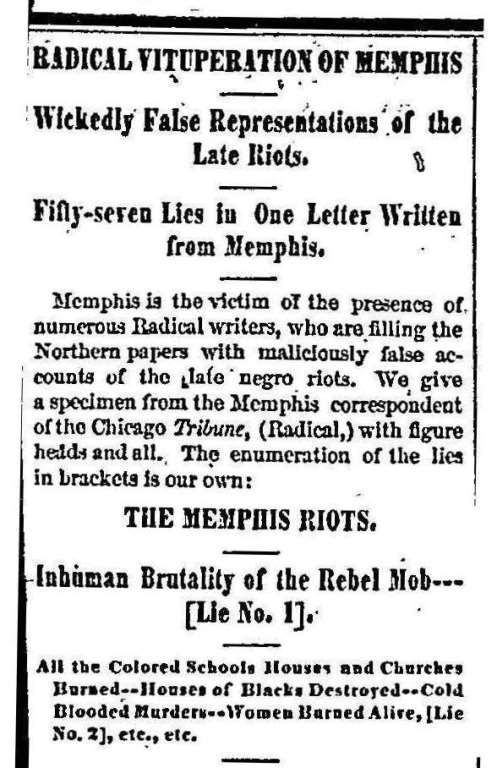 The Tribune article does serve as a corrective to the coverage in the Avalanche. Here’s how it continues below the headlines above:

Before this reaches you, you will have seen, in the Memphis papers, what pretends to be an authentic account of the late “negro riots” in this city, and I would leave you to copy them entire were it not that every paper in this city, excepting the Post, has been filling its columns with the most outrageous and baseless falsehoods concerning that affair, that ever damned and disgraced a journal [lie No. 3]. They have headed their narratives of this bloody affair with a most villainous falsehoods by calling it a “negro riot.”

It was in every respect, in the beginning, a policeman’s riot [lie No. 4], though it cannot be denied that these ignorant and depraved cut throats were ably and “heroically” sustained in their work of murder, by the “first families of Memphis” [lie No. 5].

What really happened? Who really was to blame? For answers, Congress created a Select Committee on the Memphis Riots which investigated and provided a 394-page report consisting of the verbatim testimony of various participants, starting with General Stoneman, the leader of the U.S. troops. Dated July 25, 1866, it can be found in the U.S. Congressional Serial Set, also an Archive of Americana collection. 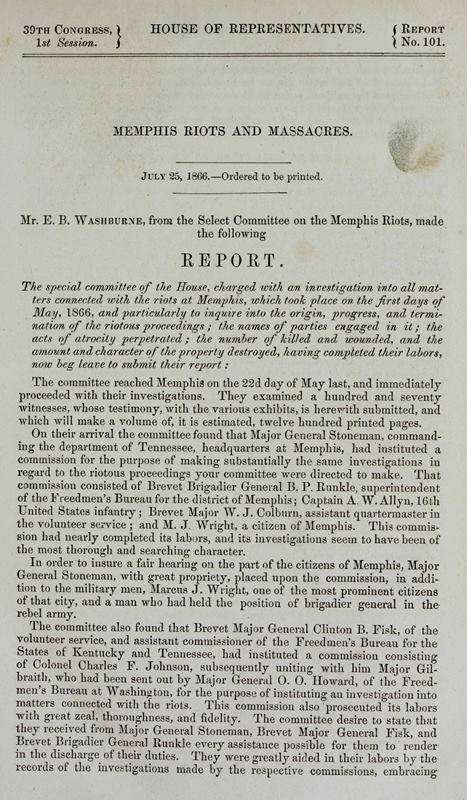 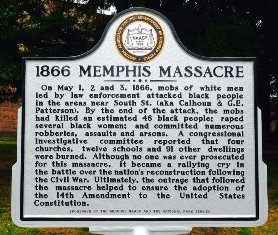 Another way to look into this significant event today would be to attend the upcoming symposium “Memories of a Massacre: Memphis in 1866, an Academic Symposium Exploring Slavery, Emancipation, and Reconstruction” at the University of Memphis on May 20 and 21, 2016. Described as “the first ever public recognition of the Memphis Massacre, an event that…played a profound role in shaping the basic legal, civil, and political structures that shape our lives today,” this free event is one of a series of commemorative activities in the city of Memphis this month. On the first of this month, the 150th anniversary of the Memphis Massacre, an historical marker sponsored by the Memphis NAACP and the National Park service was unvieled to honor those who died.

For more information about the Archive of Americana, which includes Early American Newspapers and the U.S. Congressional Serial Set, please contact readexmarketing@readex.com.