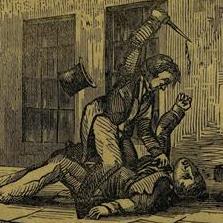 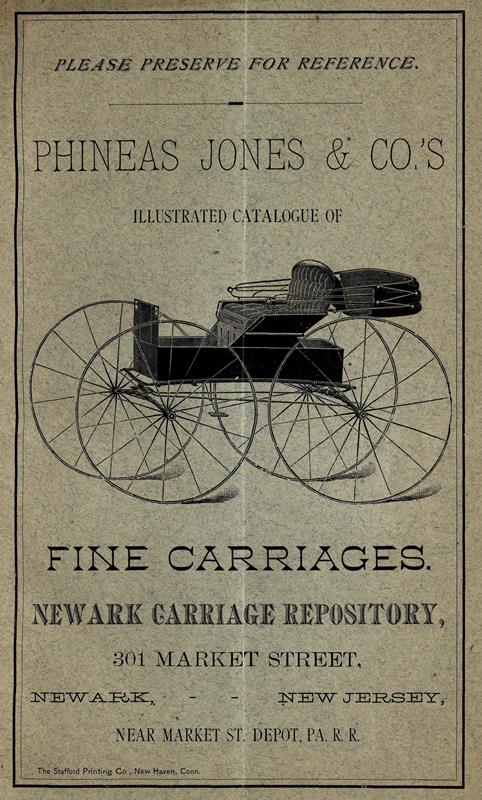 The pamphlet's author makes clear that he has no doubt about the Reverend Avery’s guilt despite his subsequent acquittal. He relates that Avery—an eminent elder of the church whose revivalist preaching was unequaled at that time—“was arrested, and although circumstantial evidence was strong against him, his friends, determined that he should not be hung, perjured themselves in a most outrageous manner to save him.”

His victim, Sarah Cornell, was one of thousands of impoverished young New England women who left their family farms to find employment in the mills and factories. She is described as attractive, dutiful, and religious. 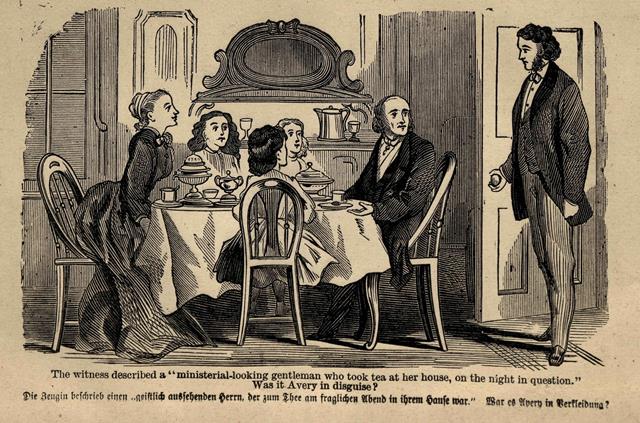 In the manner of a novelist, the pamphlet writer recreates his understanding of the events, providing dialogue and specificity to events as he imagines them. As an example, he makes us witnesses to the reverend’s rape of the factory girl:

In vain the frightened girl endeavored to release herself. His strong arms held her fast. He drew her head down on to his bosom and rained kisses upon her lips and cheek. His breath came hot and fast…

Inevitably, Sarah becomes pregnant. She confronts Avery, and he strangles her. 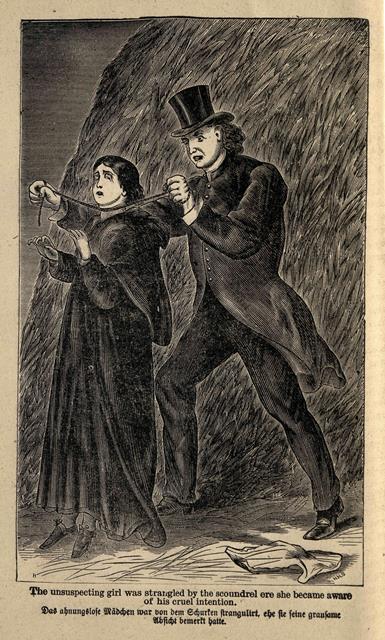 Afterward he arranged her body to appear that she had hanged herself next to the haystack. 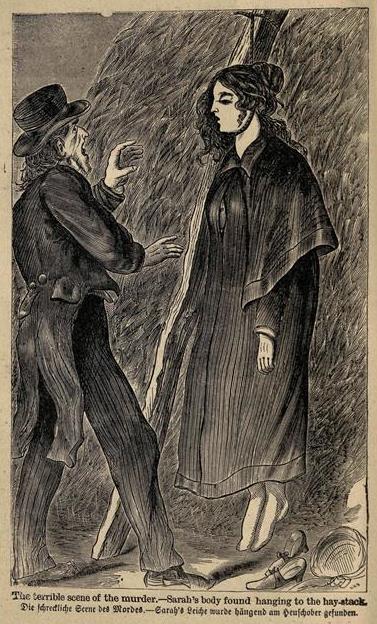 In the trial it is revealed that the autopsy proved she had been pregnant. But, according to the author, despite the very strong circumstantial evidence against Avery, “To every fact that had been proven by the government, the defence offered evidence in rebuttal. Methodist evidence.” Honest men “came forward to the stand and swore to anything to save brother Avery” and women too “swore to undoubted lies, rather than see their beloved fellow-laborer in Christ hung.”

Subsequent to his acquittal, the minister removed to Ohio and, by all accounts, became a humble farmer who gained a good reputation. Sarah, of course, moldered in her grave. 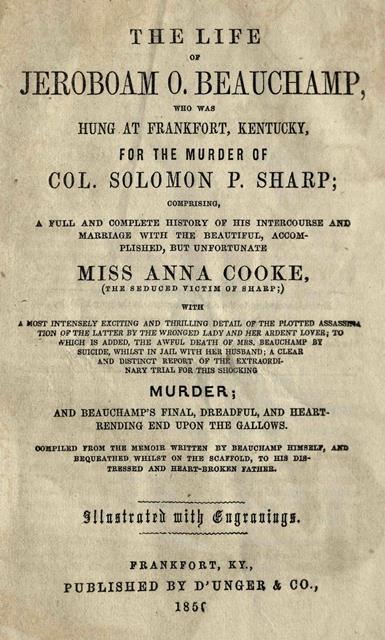 The life of Jeroboam [sic] O. Beauchamp, who was hung at Frankfort, Kentucky for the murder of Col. Solomon P. Sharp… (1850)

The rest of the title essentially tells the whole story: “…comprising, a full and complete history of his intercourse and marriage with the beautiful, accomplished, but unfortunate Miss Anna Cooke (the seduced victim of Sharp;) with a most intensely exciting and thrilling detail of the plotted assassination of the latter by the wronged lady and her ardent lover; to which is added, the awful death of Mrs. Beauchamp by suicide, whilst in jail with her husband; a clear and distinct report of the extraordinary trial for this shocking murder; and Beauchamp’s final, dreadful, and heart-rending end upon the gallows. Compiled from the memoir written by Beauchamp himself, and bequeathed whilst on the scaffold, to his distressed and heart-broken father.”

Beauchamp was quite a bit younger than his beloved Anna and appears to have been imbued with the tempestuous vigor of youth. Col. Sharp was a prominent Kentuckian and, at the time of his murder, the newly-appointed attorney general of the state. Anna agreed to marry Beauchamp if he would agree to murder Sharp to avenge his rape of her which resulted in a child who died shortly after birth. 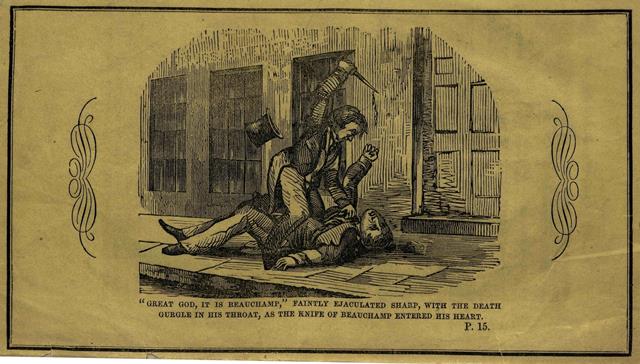 In short, Beauchamp eagerly agreed and carried out the deed. He was soon arrested and imprisoned. Anna joined him in his cell, but she was free to come and go. Subsequently, she smuggled in a weapon, and the couple joined in a mutual suicide pact which he survived just long enough to be hanged. 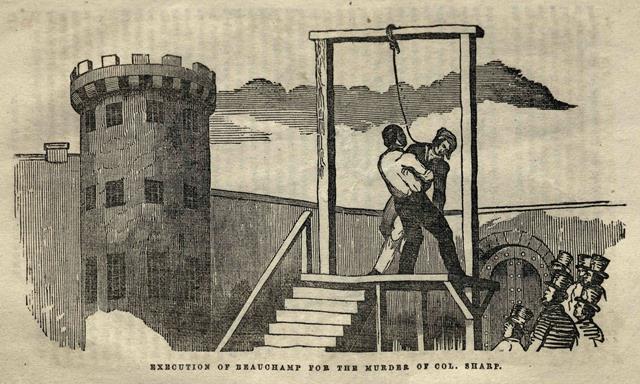 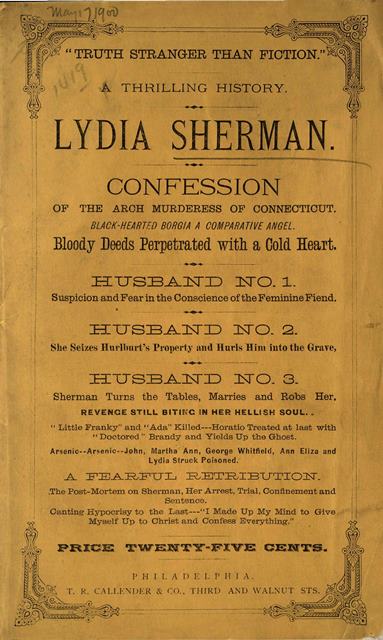 This is the first-person confession of a woman who appears to have solved the problems attendant upon her life by administering arsenic to those whose demands on her were the most exhausting, namely her husbands and children. Her first husband, by her account, had become a burden on himself and others and may have been mentally ill. She was advised to put him away. Which she did.

Now widowed with two small children, she writes, “I thought that I could not get along and support them, and I came to the conclusion that it would be better for them if they were out of the way.”

So, she poisoned them on an incremental basis, taking care to call in the doctor to witness their declining health. Both children were “taken with vomiting” soon after the administration of arsenic. The girl died first. And then “In the evening Edward died. He was a beautiful boy, and did not complain during his illness.”

When her older son was fourteen he took a job painting which led to a case of “painter’s colic” from which he did not improve. She became discouraged and in her words, “I thought he would become a burden upon me, and I mixed up some arsenic in his tea.” By this time her older daughter, also called Lydia, was gainfully employed making bonnets at home with her mother. Still, “my little daughter, Anna Eliza, was with me, and I thought if I could get rid of her that Lydia and myself could make a living.” With some arsenic at hand she went to work, and soon “the happiest child I ever saw” was dead.

Daughter Lydia subsequently died, apparently of typhoid fever, unassisted by her mother. Lydia senior now was able to get employment as a nurse which led to her second marriage to a man who died not long after the knot was tied. This led to a second marriage and a second widowhood which led to a third marriage to a man with children. One of the children, little Franky, was sickly which complicated her third husband’s domestic relations involving an ex-mother-in-law. Her new husband mentioned that if Franky were “dead the old woman should not stay another day...” There was arsenic in the house, and Lydia writes, “I was full of trouble, and, not knowing what to do, I was tempted to give him (Franky) something to get him out of the way, for I thought he would be better off.” 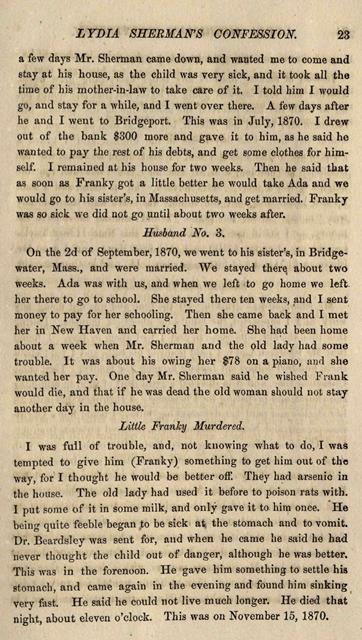 Lydia was not yet done with solving her problems by judicious application of poison. She seems not to have enjoyed killing people and expressed no pleasure. She even refers to being troubled in her mind and vexed at the difficulties she faced. Still, she recounts her astonishing history of serial murder with either remarkable stoicism or utter sociopathic indifference.