A Nebulous New Threat: Tracing the Intersection of Climate Science and Foreign Policy 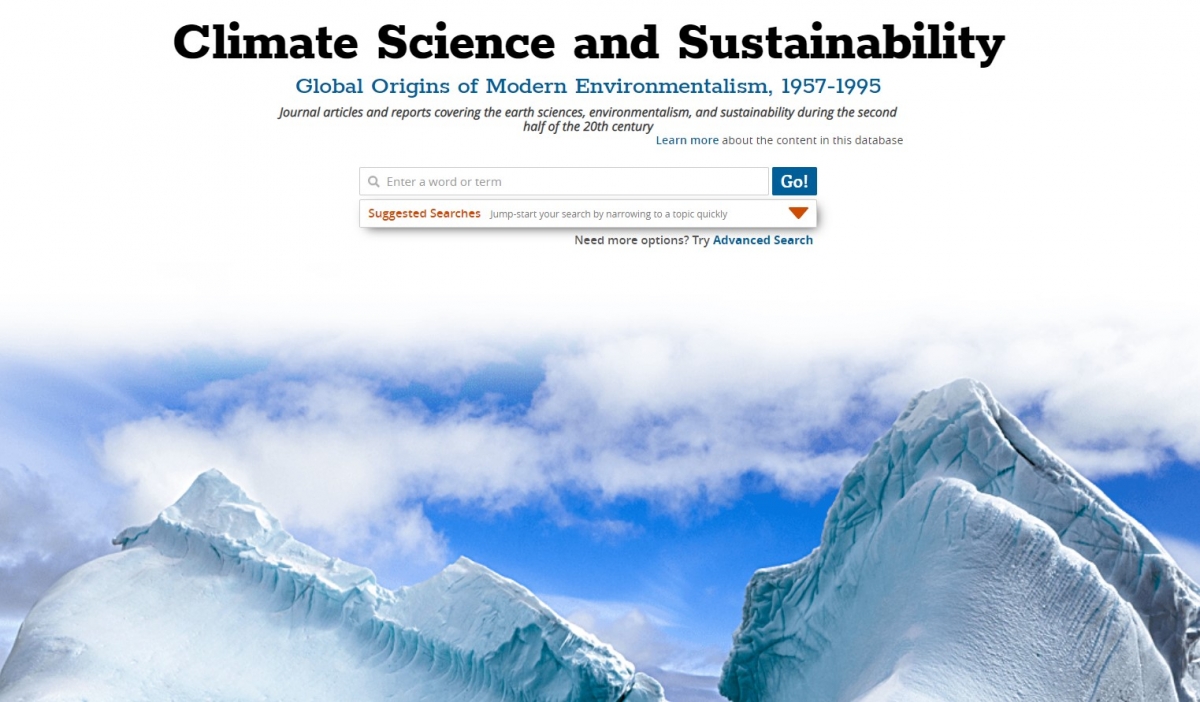 Yet while the ways in which climate change fuels conflict and instability are ever evolving, the threat itself is hardly new. As early as the 1980s, the U.S. Naval War College began studying the intersection of global warming and American security. And a division of the CIA that monitored, recorded and translated into English thousands of foreign broadcasts and publications has been tracking international research on the issue for even longer. Today, these reports, found in Climate Science and Sustainability, offer a compelling archive for researchers interested in tracking how governments around the world have responded to the growing threat of climate change over time.

One of the earliest publications to draw the CIA’s attention was a 1965 paper from the Bulletin of the Academy of Sciences USSR. Its conclusions were shockingly prescient: the authors wrote of receding glaciers, “unusually warm weather” and “a noticeable eustatic rise in the level of the world ocean.” At higher altitudes, they continued, “there began to appear species of fish, various types of plants, birds and mammals which were not there formerly.” 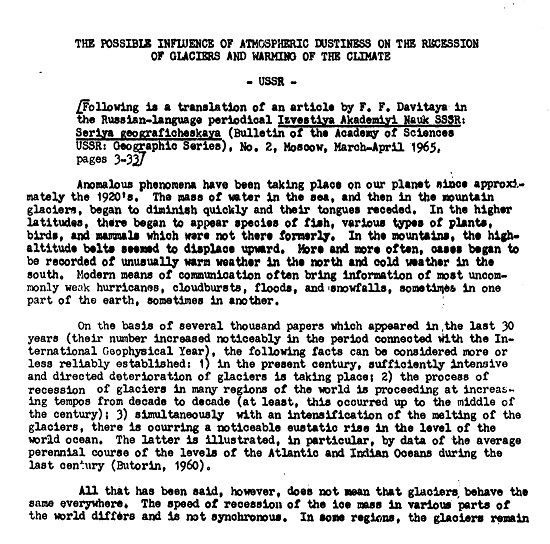 Just one year later, a Moscow publication took these observations a step further, asking: “Is it possible to influence the climate and the weather?” If indeed mankind could change the weather, the article theorized—perhaps by injecting carbon particles into the atmosphere—then governments could act to prevent “possible changes in those regions…favorable for human life,” while intentionally changing the weather “in places where this is necessary for improving living conditions.” This, the authors declared, would be imperative for advancing the “Age of Communism.” 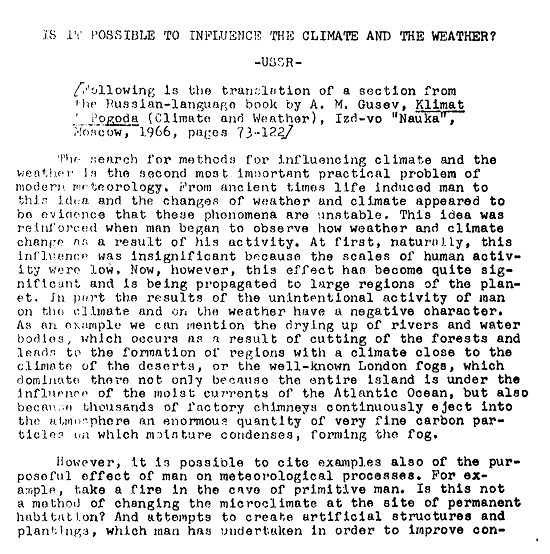 Soviet scientists also correctly predicted that the Arctic would warm faster than the rest of the world. In 1989, an article in Moscow’s Problemy I Resheniya recommended additional research to understand the socio-political impact of this phenomena. Climactic changes in the polar regions, for example, could cause problems for radio communications—“an important national-economic problem.” 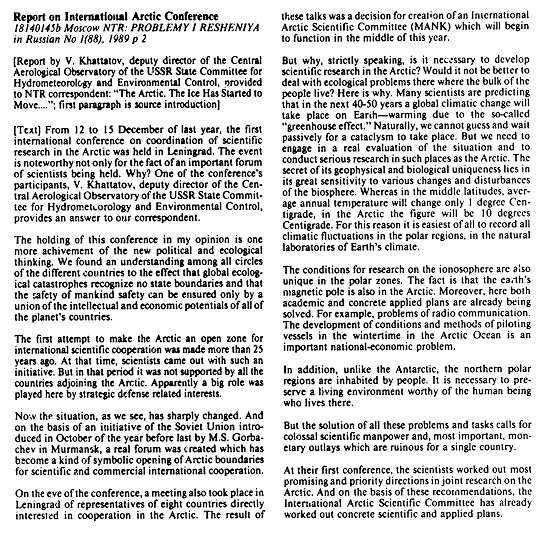 As research on the impact of greenhouse gas emissions grew more robust, other world powers began acting to protect their interests from the new, nebulous threat of climate change. A 1979 article in London’s West Africa publication noted that the “economic activities of man” are invariably linked to the climate, and that climactic upheavals—such as the 1972-73 Sahel drought—would lead to instability among the still-developing economies of Africa. 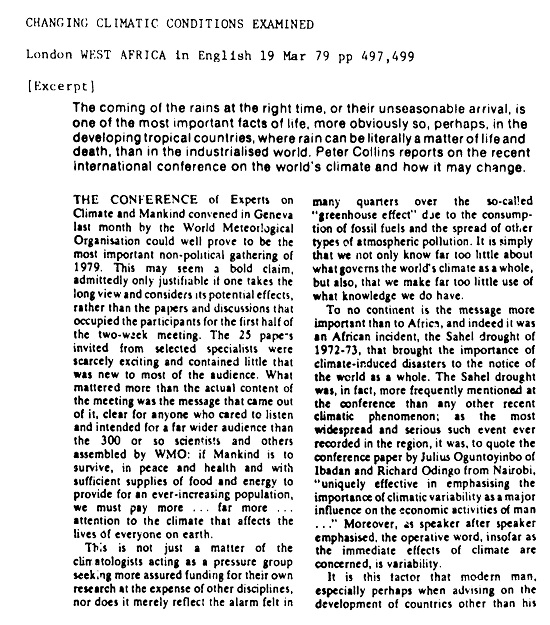 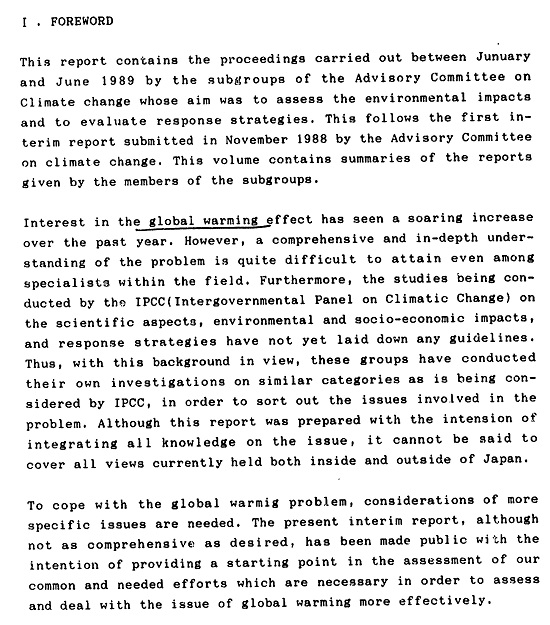 That same year, Japan’s Kyodo news agency reported that the Japanese government had decided to cap carbon emissions by the year 2000 “as part of a 20-year plan to combat global warming.”

In the United States, the administration of President George Bush proved reluctant to enact similar legislation. But as the Bush era gave way to Bill Clinton’s presidency, the U.S. doubled down on its commitment to combating climate change—prompting the industries most responsible for the warming planet to grow defensive. An op-ed in the Australian Financial Review, for instance, stated that because Australia exported and burned vast quantities of coal, “any significant reduction in the level of emission of greenhouse gasses will impose very significant costs on Australia.” Businesses would suffer, the writer argued, affecting Australia’s entire economy. 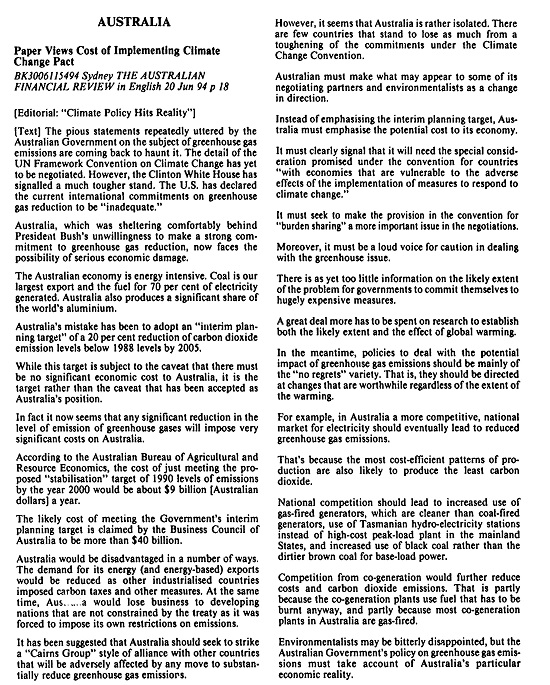 This perspective, too, was prescient. In coming decades, it would be echoed by corporations and governments across the developed world. Plans to cap or tax carbon would stagnate, and climate change would become political in countries like the United States—setting the stage for the security threats now capturing the attention of both the intelligence community and researchers in a range of disciplines.