You may have heard of the “Pentagon Papers” from the Vietnam War era. More recently, the “Panama Papers” exposed the use of that country’s legal and financial institutions for tax evasion. But what about the “Pumpkin Papers?” In the spirit of the season, we’ll shed some light on these documents that were used to keep the specter of communism at bay following World War II.

In 1950, the admission of the “Pumpkin Papers” as evidence of espionage against Alger Hiss led to his conviction for perjury, resulting in a five-year federal prison sentence. But perhaps as significant, the conviction of Alger Hiss brought U.S. Representative Richard M. Nixon to national prominence, as seen in these clippings from the Readex digital edition of the Washington Evening Star. 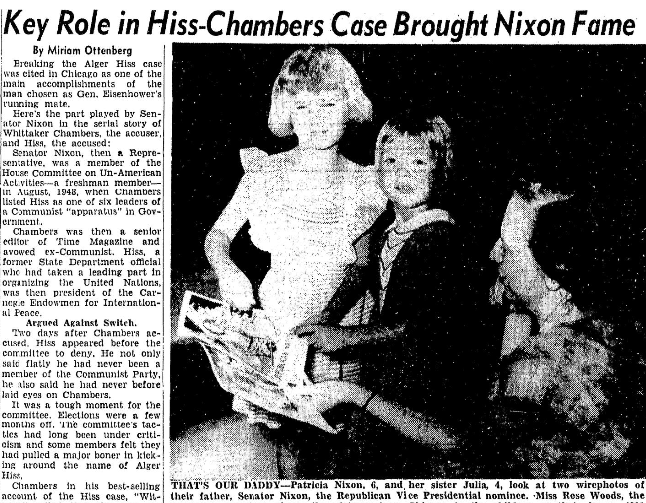 It’s entirely predictable that a search for “Alger Hiss” in the U.S. Congressional Serial Set, 1817-1994, would produce many documents that do not hint at his later notoriety. As a Harvard-educated lawyer with a distinguished record as a public servant, Hiss had access to individuals and information at the highest level. The excerpt below comes from diplomatic papers relating to the Malta and Yalta conferences in 1945, which Hiss attended. 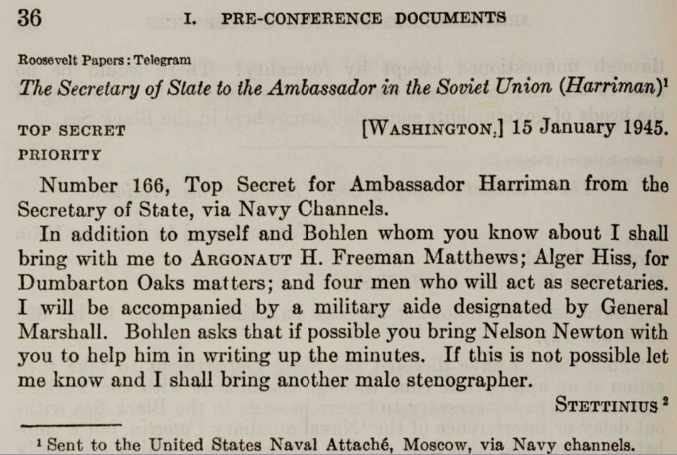 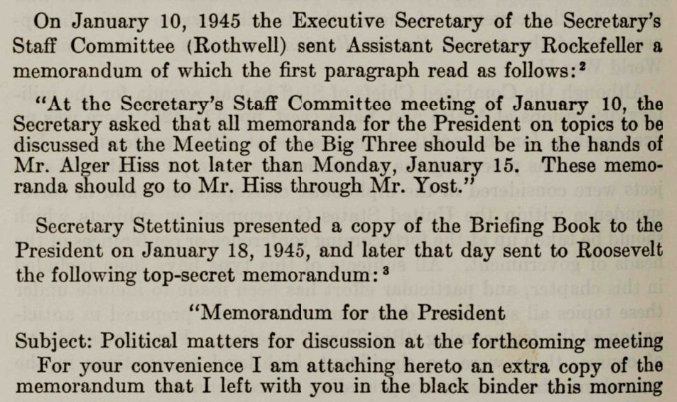 In 1948 Whittaker Chambers, Senior Editor at TIME magazine, went public regarding his own past as a communist and a Soviet spy. In the process of doing so he implicated many government officials including Alger Hiss. 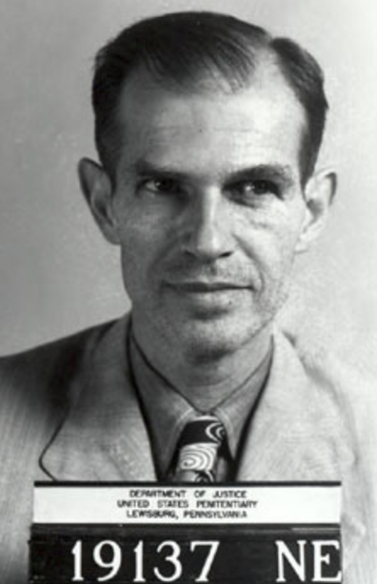 Initially it was a hard sell; given Hiss’s impeccable resume and Chambers’ admitted wrongdoings, his allegations were dismissed as a “red herring” by President Truman and many others. But one person took Chambers seriously: first-term Congressman Richard M. Nixon, of California, who had just joined the House Committee on Un-American Activities in 1947.

As the investigation dragged on, Hiss charged Chambers with slander and challenged him to produce documentary evidence of espionage. Chambers promptly complied, and all of a sudden the “red herring” began to appear “in the strangest places:” 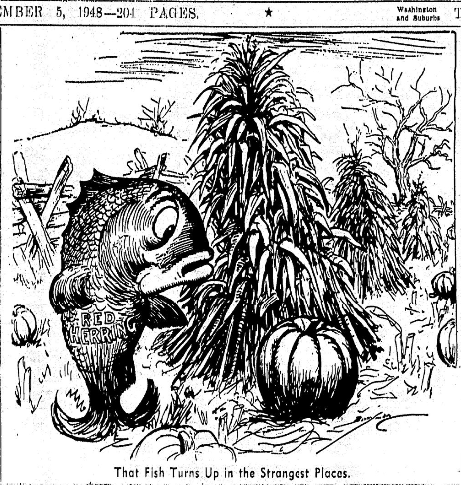 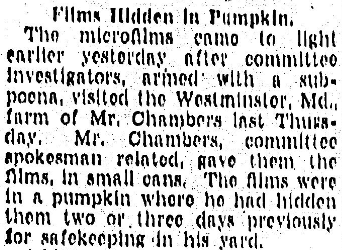 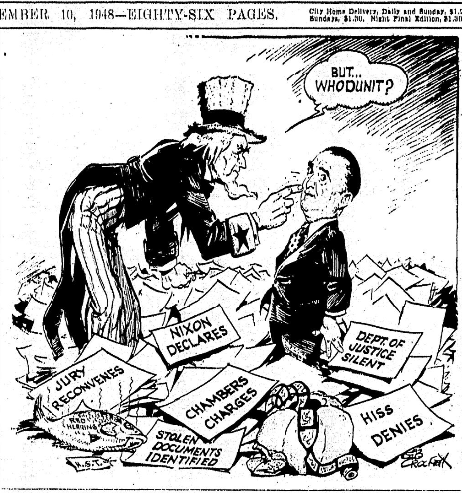 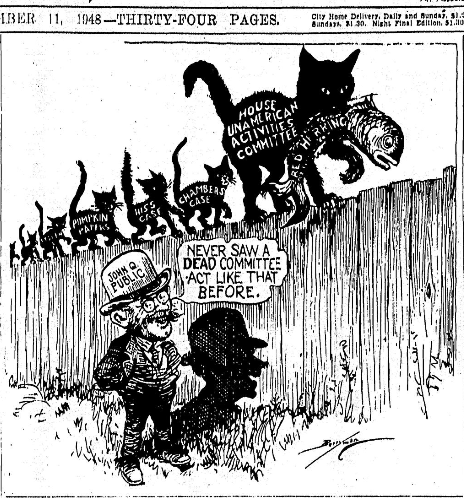 The “Pumpkin Papers” included copies of documents in Hiss’s own handwriting—look what the cat(s) dragged in! 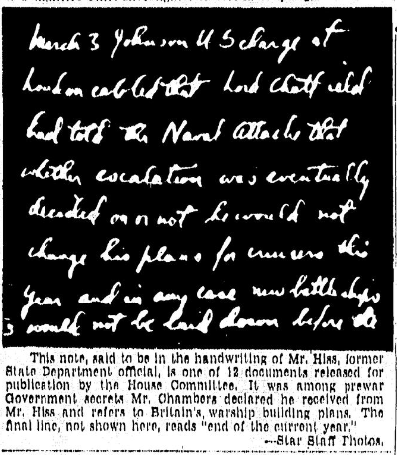 This note, said to be in the handwriting of Mr. Hiss, former State Department official, is one of 12 documents released for publication by the House Committee. It was among prewar Government secrets Mr. Chambers declared he received from Mr. Hiss and refers to Britain’s warship building plans.

The statute of limitations for espionage had expired, but Hiss was convicted on two counts of perjury. Nixon’s fame was assured.

When the jury came in, Mr. Chambers got the news from a reporter calling for a comment. “I hope the American people,” he said, when telephoned by The Star, “will realize the debt that they owe to this jury, Mr. Murphy and the tireless and splendid efforts of the FBI.”

“Nor should they forget Congressman Richard Nixon of California who almost single-handedly forced the House Committee on Un-American Activities to pursue the Hiss investigation,” Chambers added.

The Republican legislator kept the Hiss-Chambers controversy alive, after Hiss denied knowing Mr. Chambers, by having the two men confront each other. Mr. Nixon also sparked the side investigations in an effort to prove or disprove the minor elements in the two men’s stories. 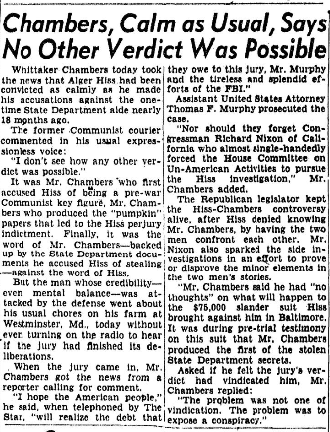 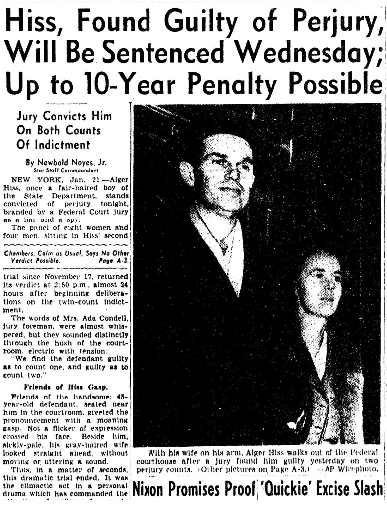 Both Chambers and Hiss would eventually write autobiographies in which they never retreated from their assertions, although in light of documents from the VENONA program declassified from 1995-1997, it’s clear that there was indeed a highly placed spy in the State Department known as “ALES” whose access and tenure coincided with that of Alger Hiss. VENONA was a secret program to decrypt Soviet correspondence begun in 1943 by the predecessor to the U.S. National Security Agency. VENONA material has generally been proven to be reliable, however, the possibility remains that the Soviet agent could also have been Henry Wilder Foote, a former journalist and known proponent of leftist ideology. 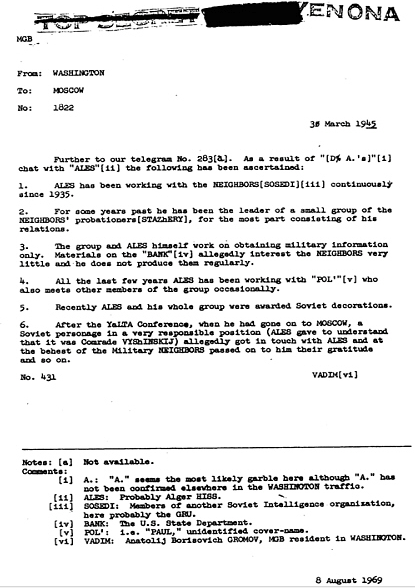 So—the mystery remains! Consider this the briefing preliminary to your assignment: using Readex digital collections and other resources, either clear the name of Alger Hiss, or vindicate the claims of Whittaker Chambers and his champion, Richard Nixon. This message emphatically won’t self-destruct in five seconds; in fact, Readex creates timeless primary source collections for online research, and we trust that you’ll refer to them often in this and other compelling matters.

For more information about the Evening Star, 1852-1981 or the U.S. Congressional Serial Set, 1817-1994, please contact readexmarketing@readex.com.