Prime Bang Up: Three of the Rarest American Broadsides Published Two Centuries Ago 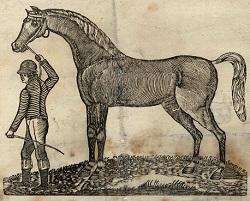 This most recent release of Early American Imprints, Series II: Supplement 3 from the American Antiquarian Society includes a number of the rarest American broadsides from 200 years ago. These range from the pathos of an honorable man’s petition to the court for protection from his creditors to a peculiar promotion for an evening of entertainment in Augusta, Georgia.

To the Honorable Superior Court to be held at Hartford....The Petition of George Robinson, of Marlborough, in the County of Hartford, humbly sheweth— (1817) 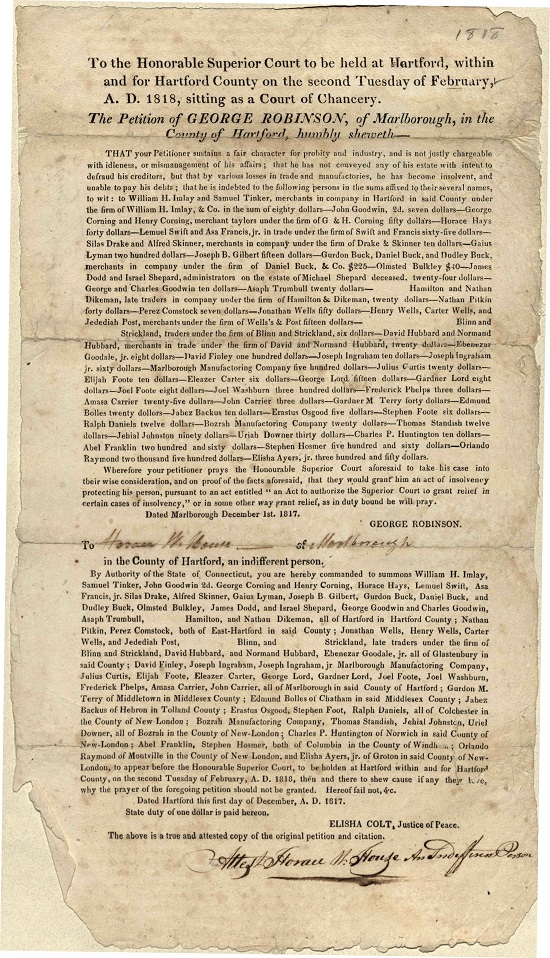 In the early 19th century it was not unusual for an indebted person to publish a broadside acknowledging his debts and his creditors. George Robinson of Connecticut did exactly that in 1817. Of interest is his specificity and the striking contrasts in the amounts he owed to contemporary creditor. The largest debts were “Orlando Raymond two thousand five hundred dollars” and several for one or two hundred dollars. Many of his obligations were for a few dollars and sometimes for ten and twenty dollars. Robinson appears to support his claim to integrity in the details he provides.

THAT your Petitioner sustains a fair character for probity and industry, and is not justly chargeable with idleness, or mismanagement of his affairs; that he has not conveyed any of his estate with intent to defraud his creditors, but that by various losses in trade and manufactories, he has become insolvent, and unable to pay his debts; that he is indebted to the following persons in the sums affixed to their several names, to wit: to William H. Imlay and Samuel Tinker, merchants in company in Hartford in said County under the firm of William H. Imlay, & C. in the sum of eighty dollars—John Goodwin, 2d. seven dollars—George Corning and Henry Corning, merchant taylors [sic] under the firm of G. & H. Corning fifty dollars….Silas Drake and Alfred Skinner, merchants in company under the firm of Drake & Skinner ten dollars….Joseph B. Gilbert fifteen dollars….Olmstead Bulkley $40—James Dodd and Israel Shepard, administrators on the estate of Michael Shepard deceased. twenty-four dollars….Asaph Trumbull twenty dollars….Perez Comstock seven dollars….Elijah Foote ten dollars, Eleazer Carter six dollars…

As published, the petition concludes with an order to each creditor by name “to appear before the Honourable Superior Court, to be holden at Hartford within and for Hartford County, on the second Tuesday of February, A. D. 1818, then and there to shew cause if any they have, why the prayer of the foregoing petition should not be granted.” It is signed by Elisha Colt, Justice of the Peace” and concludes with an ornate warning: “Hereof fail not, &c.”  It is also noted that “State duty of one dollar is paid hereon.”

Theatre. Mr. Spiller, Respectfully informs the Ladies and Gentlemen of Augusta, that he will do himself the honor…To present them with a Dramatic Entertainment... (1819) 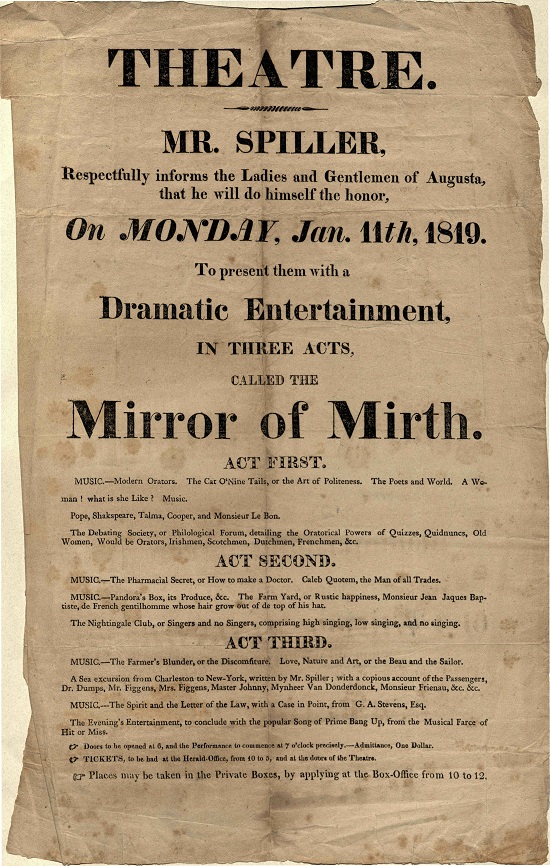 The citation for this imprint ascribes both Broadsides and Playbills as genres. Apparently, Mr. Spiller had something for everyone in his theatrical presentations and was to be in Augusta, Georgia, for one night only on January 11, 1819. It is tempting to transcribe the whole single page broadside which details three acts not evidently related to one another. Here was what was on offer for “Act First.”

MUSIC.—Modern Orators. The Cat O’ Nine Tails, or the Art of Politeness. The Poets and World. A Woman! what is she Like? Music.

It seems possible that Mr. Spiller is a one-man show or, perhaps, a prankster. Most of the theatrical broadsides of this era boasted of large casts and spectacular effects. Passing over “Act Second,” we encounter “Act Third” which was likely designed to be a show-stopper.

MUSIC.—The Farmer’s Blunder, or the Discomfiture. Love, Nature and Art, or the Beau and the Sailor.

MUSIC.—The Spirit and the Letter of the Law, with a Case in Point, from G. A. Stevens, Esq.

The Evening’s Entertainment, to conclude with the popular Song of Prime Bang Up, from the Musical Farce of Hit or Miss.

Finally, we learn that “Admittance, [is] One Dollar” and “Tickets, to be had at the Herald Office, from 10 to 5, and at the doors of the Theatre.” 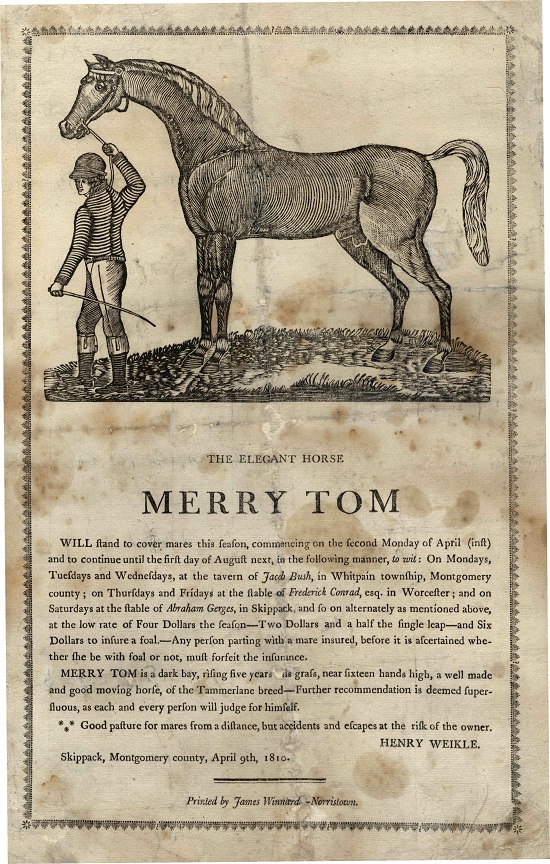 This broadside is strikingly illustrated, but the citation does not credit the artist of the woodcut which is entitled “The Elegant Horse.” It was printed in Norristown, Pennsylvania, in 1810. Merry Tom is described fulsomely, and it is clearly implied that he will produce handsome offspring.

MERRY TOM is a dark bay, rising five years…near sixteen hands high, a well made and good moving horse, of the Tammerlane breed—Further recommendation is deemed superfluous, as each and every person will judge for himself.

Good pasture for mares from a distance, but accidents and escapes at the risk of the owner.

“Mondays, Tuesdays and Wednesdays, at the tavern of Jacob Bush, in Whitpain township, Montgomery county; on Thursdays and Fridays at the stable of Frederick Conrad, esq. in Worcester; and on Saturdays at the stable of Abraham Gerges, in Skippack, and so alternately as mentioned above, at the low rate of Four Dollars the season—Two Dollars and a half the single leap—And Six Dollars to insure a foal.”