A recent release of Afro-Americana Imprints, 1535-1922, includes compelling accounts of several significant criminal trials. Five of these, spanning the years 1824 to 1851, are highlighted below.

Statement of the proceedings of the directors of the London Missionary Society, in the case of Rev. John Smith, missionary, Demerara. Extracted from the Missionary chronicle for March 1824 (1824) 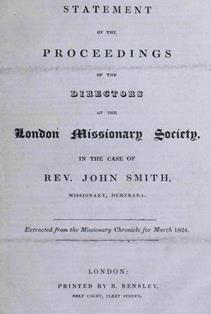 The London Missionary Society, a nondenominational organization, was created in order to bring Christianity to native people living in British colonies throughout the world. This publication is the response by the society's directors to the trial and sentencing of one of their missionaries in what is now Guyana. The Demerara rebellion of 1823 swept through the colony for two days in August and involved more than 10,000 slaves. They were rebelling against poor treatment and the mistaken belief that they had been emancipated but were not being told that by their masters. As many as 250 slaves were killed; 27 of them were executed.

The Reverend John Smith was court-martialed, having been accused of inflaming the slaves and withholding knowledge of the planned rebellion from the authorities. He was found guilty and sentenced to death. He died in prison before a reprieve from the king reached Demerara. He was 33 years old. His death became a rallying cry for the abolitionist movement in Britain.

This statement from the directors is entirely supportive of John Smith and makes references to the many enemies of the London Missionary Society. The directors reaffirm instructions to their missionaries that they “are not sent to relieve them [slaves] from their servile condition, but to afford them the consolation of religion and to force upon them the necessity of being ‘subject not only for wrath but for conscience sake.’” 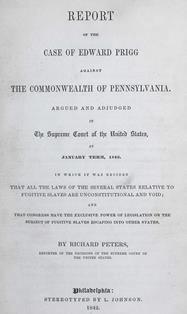 Report of the case of Edward Prigg against the commonwealth of Pennsylvania. Argued and adjudged in the Supreme Court of the United States, at January term, 1842. In which it was decided that all the laws of the several states relative to fugitive slaves are unconstitutional and void; and that Congress have the exclusive power of legislation on the subject of fugitive slaves escaping into other states (1842)
By Richard Peters, reporter of the decisions of the Supreme Court of the United States

Edward Prigg was a slave-catcher who had been hired by a Maryland family to capture and return Margaret Morgan who had moved to Pennsylvania. Morgan had lived somewhat freely in Maryland but had not been legally emancipated. The heirs of her owner made the decision to return her to an enslaved status.

Prigg and three other men were arrested and arraigned under an 1826 Pennsylvania law that forbid the capture and return of fugitive slaves. They were found guilty by a lower state court and that verdict was upheld on appeal to the Pennsylvania Supreme Court. Prigg appealed to the U.S. Supreme Court which subsequently agreed with him and overturned the conviction. They found that both Article IV of the U.S. Constitution and the Fugitive Slave Act of 1793 entitled slave owners to capture fugitive slaves in any state and that local and state officials were forbidden to take any role in support of the fugitive. Because the decision also prohibited any state or local official from assisting in the capture of a slave, the effect was to undermine the act of 1793 which led to the enactment of the Compromise of 1850 which included an even harsher law for fugitive slaves.

A brief sketch of the trial of William Lloyd Garrison, for an alleged libel on Francis Todd, of Massachusettts [sic] (1830) 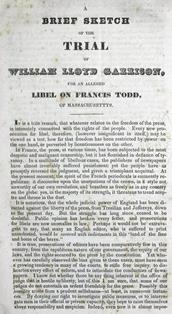 This is William Lloyd Garrison's own, sometimes acerbic, account of being on trial for libel and losing the case. At issue was an earlier article printed in Garrison's Baltimore newspaper, the Genius of Universal Emancipation. He had accused one Francis Todd of allowing his merchant ship to be used for transporting slaves from Baltimore to New Orleans. Mr. Todd sued Garrison for libel and won. Garrison makes clear his disdain for the judge, the jury, and other newspapers in Baltimore, writing, “The Baltimore presses are celebrated for their craven spirit, their abject servility, their cormorant selfishness, their stagnant quiescence. The loss of an advertisement, or the withdrawal of a subscriber, is of far greater consequence than the exposure of corruption or the reform of abuses.”

Garrison concludes this account by swearing to continue to call out all who participate in the slave trade, however exalted they may be. He expresses his own shame “that I have done so little for people of color” and supposes that “a few white victims must be sacrificed to open the eyes of this nation, and to show the tyranny of our laws.” He asks that his “editorial brethren” publish the facts of his trial and “to make such comments as may seem expedient.” He asks for a change of verdict concluding that all of Europe would be astonished “if it were trumpeted in that quarter, that an American citizen lies incarcerated in prison for having denounced slavery, and its abettors, in his own country!” 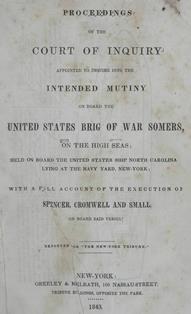 Was Herman Melville inspired to write the novella Billy Budd by the events of this mutiny? The USS Somers is the only ship in the U.S. Navy ever to have a mutiny leading to executions. The apparent leader of the putative mutiny was midshipman Philip Spencer, the son of the Secretary of War, John C. Spencer. One of the members of the chain of command on board was Guert Gansevoort. He was a first cousin to Melville who may have been intrigued enough with the real life events aboard the Somers to incorporate some of them into his fiction.

The Somers was on its first mission after a shakedown cruise and was heading for the western coast of Africa. Philip Spencer told another sailor that he and 20 others were plotting a mutiny with the intention of using the ship for piracy. His boasts were reported. Initially, captain Alexander Slidell MacKenzie was reluctant to take action, and Spencer claimed he was just playing a game.

The captain and his officers finally did take action, finding that Spencer and two others “were guilty of a full and determined intention to commit a mutiny.” The three were executed aboard the ship and buried at sea. When the public learned of these events there were many questions and many doubted the propriety of the captain's decisions. Hence, the inquiry reported in this publication. Captain MacKenzie was exonerated. 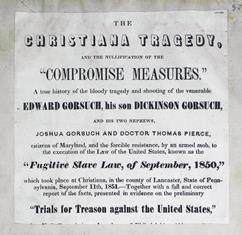 A Full and correct report of the Christiana tragedy, in the county of Lancaster, state of Penna, Sept. 11, 1851, as repo[r]ted verbatim et literatim, on the hearing and examination, as the same was presented in evidence, before Alderman Reigart, September 25th (1851)

The enactment of the 1850 Fugitive Slave law heightened tensions for the people who provided shelter and aid to escaped slaves. In 1851 Edward Gorsuch, a planter from Maryland, traveled to Pennsylvania to capture three of his slaves who had escaped two years earlier. As he attempted to take possession of them, a riot broke out involving as many as 100 men of color and at least two white men. Mr. Gorsuch was killed. This event became a national story at a time when the country was becoming ever more divided over the issue of slavery. It was also significant because of the size and strength of the defenses that former slaves and other African Americans were organizing for their protection.

Because of its location on the Mason-Dixon Line, Lancaster, Pennsylvania, was the first northern community that many escaping slaves reached. Consequently, there were 3,000 or more fugitive slaves and other people of color living there in 1851. It was from this population that men rushed to protect their brothers from Mr. Gorsuch.

This imprint is a collection of related newspaper reports as well as the official report of the incident. Thirty-eight men were indicted by a grand jury for the crime of treason. The first defendant to go to trial was Castner Hanway. The trial, which lasted 18 days, attracted financial support for Hanway from Lucretia Mott, and the defense was led by Congressman Thaddeus Stevens. Mr. Hanway was acquitted. Soon after all of charges against the other men were dropped.