Remembering the Triangle Shirtwaist Company Fire on its 100th Anniversary 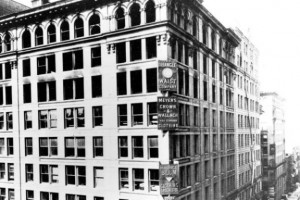 The Triangle Shirtwaist Company was a business that made shirtwaists, the common term of the day for women's blouses. The business, owned by Max Blanck and Isaac Harris, was located on the eighth, ninth, and tenth floors of the Asch Building in New York City. Most of its employees were young women, mainly Italian and European Jewish immigrants. While the building was relatively modern and clean, the pay was low, the days were long, and working conditions were often dangerous. These factors combined to make the factory a classic example of a "sweatshop." 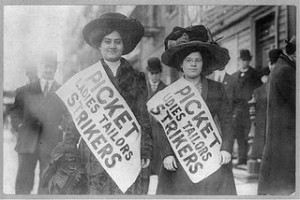 In 1909, New York City’s garment workers, in conjunction with the International Ladies’ Garment Workers Union (ILGWU), went on a general strike to fight for better hours, wages, and working conditions. Women from the Triangle Shirtwaist Company joined the strike, which lasted for fourteen weeks and was known as the “Uprising of 20,000.” The strike was violent; many women were beaten by hired thugs and arrested by police. In February 1910, the ILGWU accepted an agreement providing better wages, working hours and conditions, but not the right to organize. The Triangle Shirtwaist Company was one of a few businesses that refused to sign the agreement. The need for such workplace reforms would soon become tragically clear. 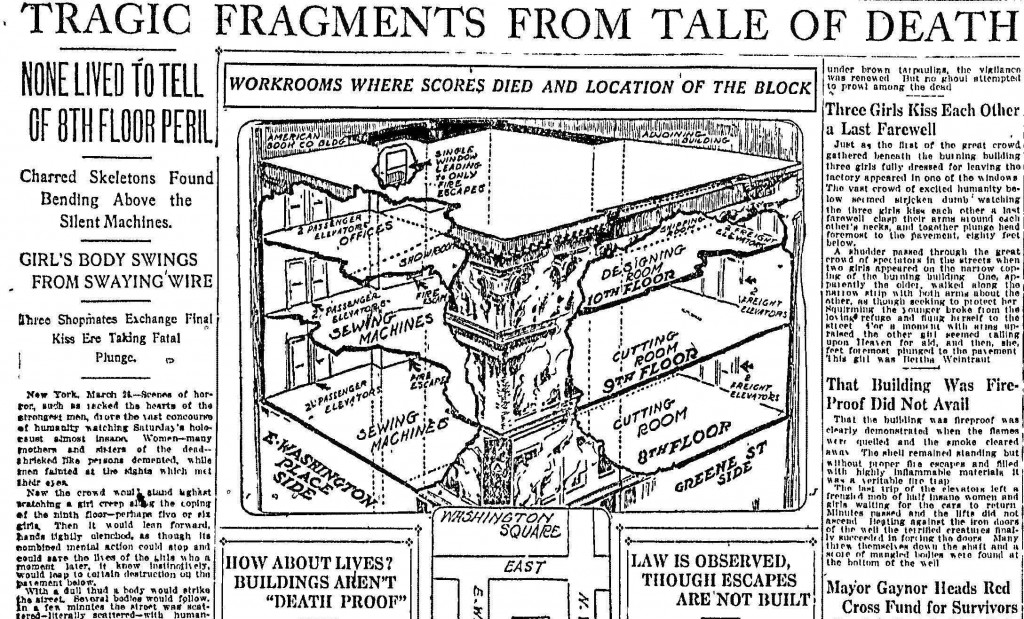 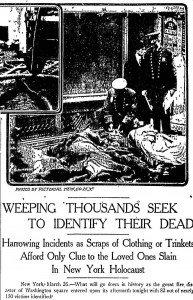 On the afternoon of Saturday, March 25, 1911, a fire broke out on the eighth floor of the factory, presumably ignited by a still-burning match or cigarette butt. In a matter of minutes the day turned into a nightmare. Workers on the tenth floor were warned via telephone, but there was no way to warn those on the ninth floor. The only warning they received was the fire's arrival.

There were five exits on the ninth floor—two elevators, a fire escape, and stairways down to Greene Street and Washington Place. However, the Greene Street exit was quickly blocked by flames, and the Washington Place exit was locked, a common practice to prevent theft. The foreman who held the key had already escaped. 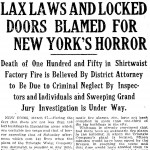 Many employees were fortunate to escape by elevator in their final moments of operation, and more ran up to the tenth floor roof, where they escaped via adjacent roofs. Many more ran to the rusted old fire escape, which twisted and collapsed under the weight. The remaining workers had two choices, jump or wait for rescue. Fire engines quickly arrived on the scene, but their ladders only reached the sixth floor. Nets held for falling victims tore on impact. The growing piles of bodies and still falling victims also impeded rescue. It was all over in 18 minutes. A total of 146 people died, most of them young women. It remains one of the worst industrial disasters since the beginning of the Industrial Revolution. 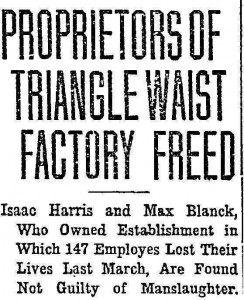 In the fire's aftermath, grieving and outraged citizens began to ask questions and make demands on officials to ensure that such a tragedy could never happen again. The factory's owners were indicted on charges of manslaughter in the second degree, under a Labor Code provision stating that no doors could be locked during working hours. A jury acquitted them. They could not prove beyond a reasonable doubt that the owners knew the doors were locked. Civil lawsuits brought against the owners were settled three years later, paying $75 per victim. 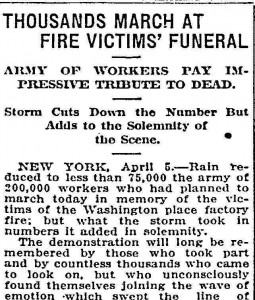 The true legacy of the Triangle Shirtwaist Company fire was the attention it brought to the dangerous sweatshop conditions in factories. The International Ladies Garment Workers Union organized a funeral march down New York's Fifth Avenue on April 5, 1911, to protest sweatshop working conditions. Eighty thousand people attended. In June 1911, New York created the Factory Investigating Committee (FIC). Based on that Committee's findings, New York passed eight bills in 1912 pertaining to occupational dangers affecting workers. In 1913, the FIC recommended 28 more bills, 25 of which passed. Those bills broadened existing legislation and gave sweeping powers to the Department of Labor to enforce the law. In 1991 the site of the fire was designated a national landmark.

To commemorate the 100th anniversary of the Triangle Shirtwaist Factory fire on March 25, 2011, PBS produced “Triangle Fire,” an American Experience documentary about the tragedy that adds a poignantly human touch.