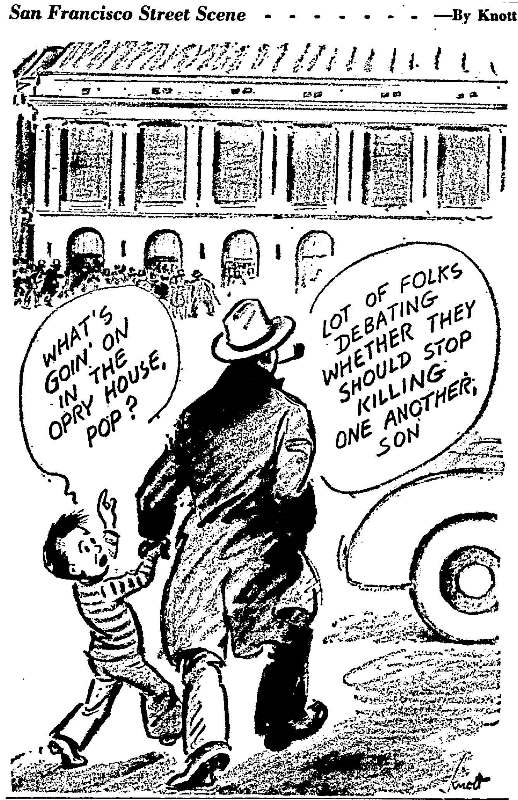 Beginning on April 25, 1945, as World War II entered its final months, delegates from dozens of nations gathered at the War Memorial Opera House in San Francisco. Their goal was the creation of an international organization that would lessen the chances of a third global conflict.  The meeting’s official name was the United Nations Conference on International Organization (UNCIO), but it was more typically called the San Francisco Conference.

The participants debated the institutional framework that had been negotiated earlier in the year by the Soviet Union, the United Kingdom and the United States at Dumbarton Oaks in Washington, D.C.  Chaired by U.S. diplomat Alger Hiss, and addressed by President Harry Truman, the San Francisco Conference ultimately produced the United Nations Charter, which was signed on June 26, 1945.

Readex collections offer three different ways to see real-time accounts of this historic meeting. The first is through the daily press accounts in America’s Historical Newspapers.  The actions of the delegates in the build-up to the final charter can be traced through news stories, editorials, opinion columns, photographs and cartoons. 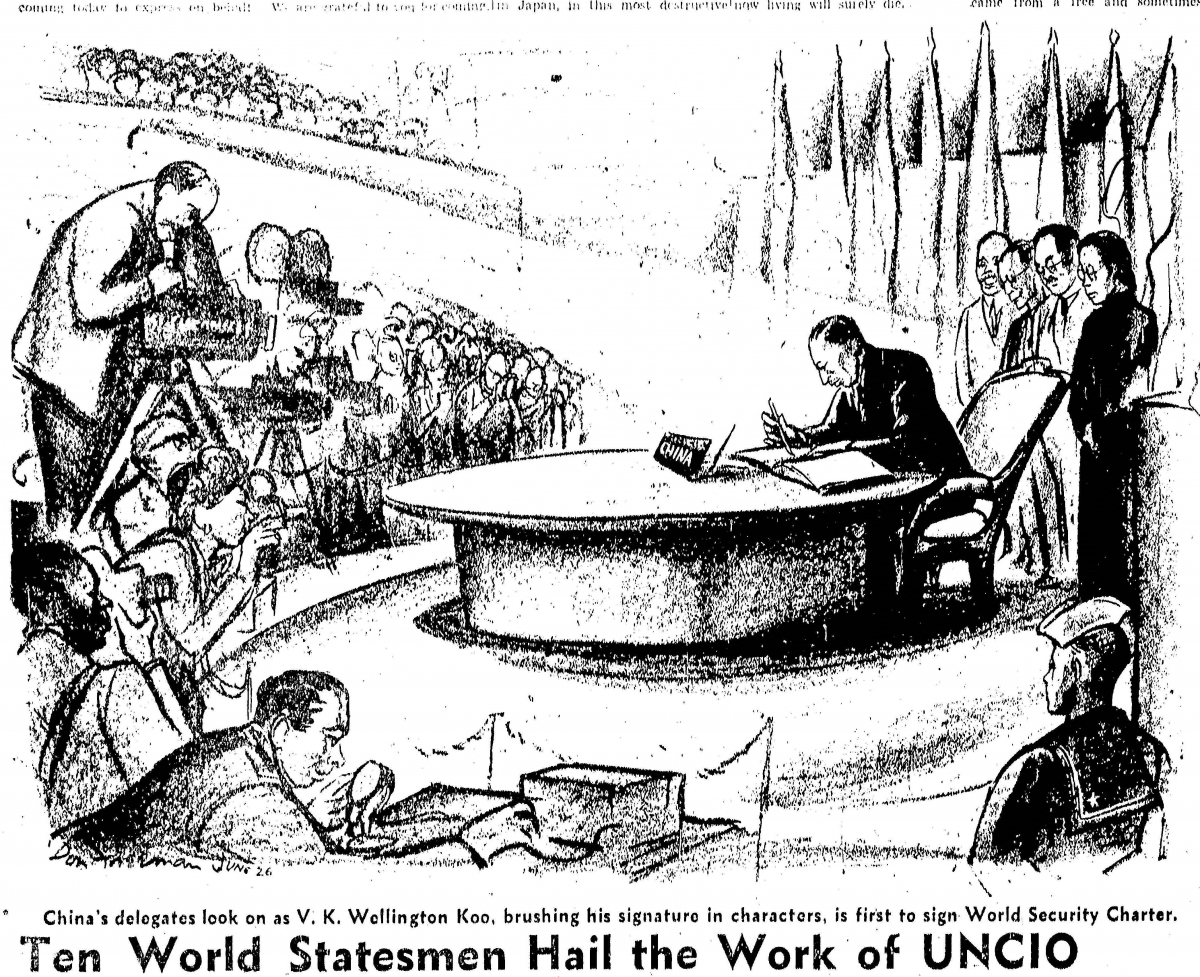 The San Francisco Chronicle provides detailed reporting from a local perspective. On the opening day of the conference the Chronicle’s coverage began this way:

The battle was joined yesterday between the peace-loving people of the world and their most formidable enemy—war, itself.

Reverently, dramatically, and with about the same simple dignity that your next door neighbor's kid went off to fight Hitler, the United Nations Conference on International Organization opened at San Francisco's War Memorial Opera House.

The spirit of Franklin D. Roosevelt was almost a tangible thing as the representatives of 46 nations were summoned into session to draft the charter of world organization which would banish war from the globe. 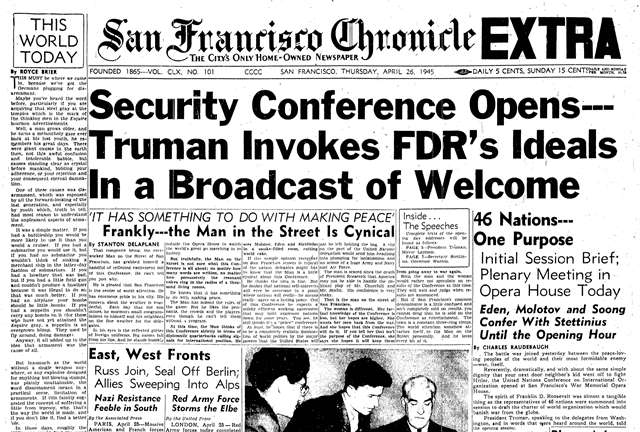 Also on the same front page is an article entitled “'It Has Something to Do with Making Peace.' Frankly—the Man in the Street Is Cynical”

He thinks the idea is fine.  But he doubts that national self-interests will ever be overcome to a point where nations will really—he means really—agree on a lasting peace….That is the man on the street of San Francisco.  The woman is different. Her factual knowledge of the Conference is less, but her hopes are higher. She wants her men back from the war.

Opinion from abroad can be found within Foreign Broadcast Information Service (FBIS) Daily Reports, 1941-1996. This Readex collection provides access to information gained through open source intelligence in order to inform the views of U.S. government decision makers on world events.  A “Roundup of Radio Reaction to the San Francisco Conference,” captured from broadcasts after the U.N. charter was signed, and translated into English as needed, appears in an FBIS Report dated June 28, 1945. Included are viewpoints from Japan and Satellites, China, Great Britain, France, the U.S.S.R., Sweden, Bulgaria, Spain, and Mexico. 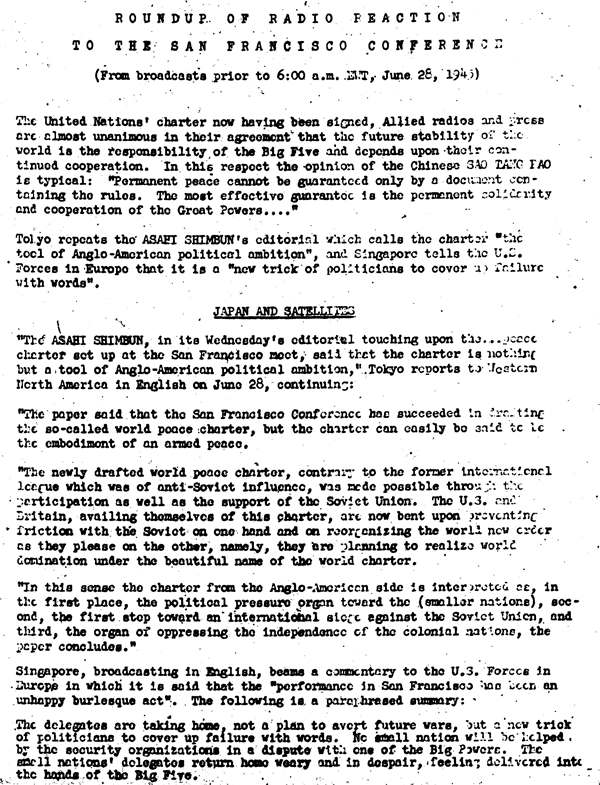 Japanese sources present the conference and the U.N. as a way for the U.S. to achieve world domination. “Tokyo repeats the ASAHI SHIMBUN’S editorial which calls the charter ‘the tool of Anglo-American political ambition,'” and Singapore tells the U.S. Forces in Europe that it is a “new trick of politicians to cover up failure with words.” A French commentator is quoted as saying “There is undoubtedly less enthusiasm about the signing of the charter in 1945 than there was about the League in 1919. The reason is that we have more experience and less illusions. This war has destroyed even more illusions than towns, and it is easier to reconstruct destroyed towns than to find lost illusions again.” Soviet sources hail it as a great achievement of Soviet principles. 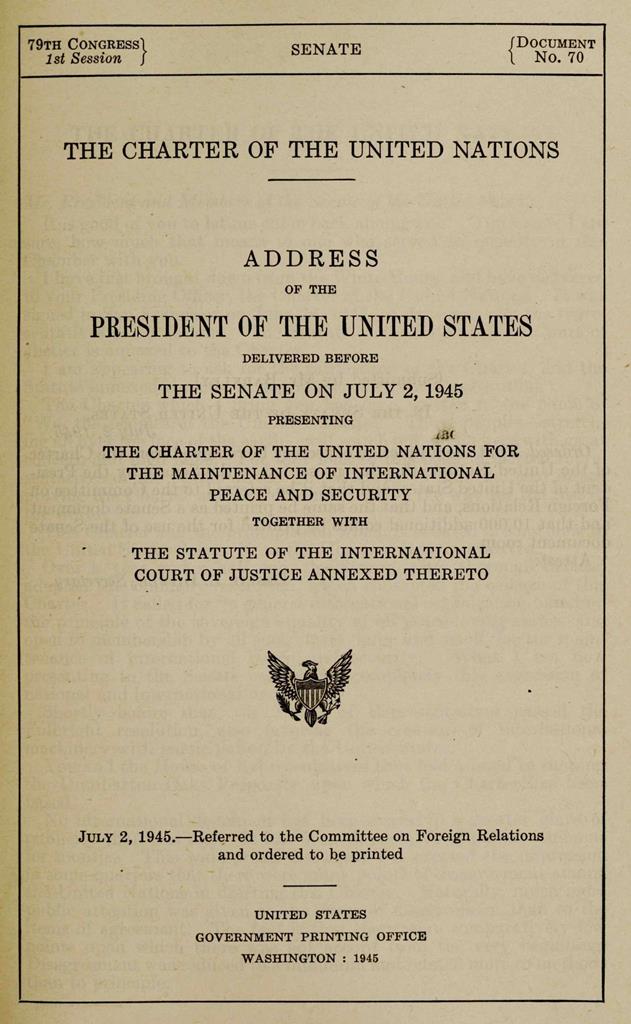 Also found in the Serial Set is Senator Arthur H. Vandenberg’s report on his experience as a delegate to the San Francisco Conference.  Vandenberg’s comments began with these words:

Mr. President, I take this immediate opportunity to make this preliminary report to the Senate upon my 2 months’ official absence as a member of the American delegation at the San Francisco Conference to create an international organization for peace and security. It has been a difficult and burdensome assignment. But it has had its compensations not only in its privilege of association with earnest peace-seeking pilgrims from every corner of the globe but also in its promise of a better world.

At this time, 70 years after the signing of the charter, while we may have our perspectives on whether or not the United Nations has fulfilled the high hopes placed upon it at its inception, it is certainly impossible to envision what the world might have become without its presence.