John Calvert’s forthcoming book Sayyid Qutb and the Origins of Radical Islamism (London: Hurst & Co., 2010) was anonymously and seemingly fairly reviewed in The Economist, July 15, 2010. Qutb, according to The Economist’s review, and I summarize here, flirted with Sufism but became a secular nationalist in the 1940s, opposed to British rule in Egypt and "Zionist colonization in Palestine." After completing his first major book, Social Justice in Islam, Qutb spent two years in the United States where, according to Calvert (or Calvert’s anonymous reviewer), his final conversion to radical Islamism was solidified.

He returned to Egypt and joined the Muslim Brotherhood in 1953, a year after Gamal Abdel Nasser and a group of officers overthrew the pro-Western government of King Farouk. Following a 1954 assassination attempt on him, Nasser struck out against the Muslim Brotherhood, and Qutb was one of those arrested and tortured. While in prison he wrote not only his influential book Milestones but also a multi-volume commentary on the Qur’an. In 1966, largely for his statements in Milestones Qut’b was tried, convicted and hanged, thus becoming "a martyr for the cause." He continues to stir up passions as martyrs are wont to do. In the Foreign Broadcast Information Service (FBIS) Daily Report, published in print from 1941 to the third quarter of 1996 and now full-text digitally searchable in the Readex FBIS Daily Reports, we find many references to Sayyid Qutb which show to some degree both how he was perceived at the time and how his legacy was received and perhaps misconstrued by terrorist organizations like al-Quaeda. 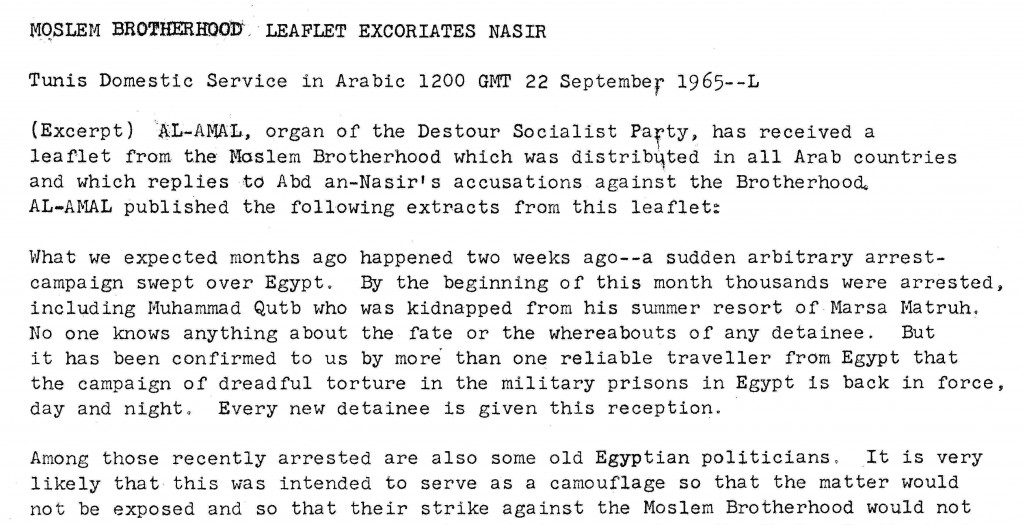 From the year 1965 we find an early account from the Tunisian Domestic Service on the Muslim Brotherhood against Nasser. Tunis Domestic Service - 22 September 1965 MOSLEM BROTHERHOOD, LEAFLET EXCORIATES NASIR As published in: DAILY REPORT. Foreign Radio Broadcasts, FBIS-FRB-65-184 on 23 September 1965 - Under the heading(s): UNITED ARAB REPUBLIC [Page B1]. 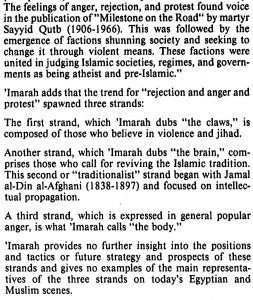 And leaping ahead to 1994 one reads an intriguing account of how three factions resulting from or derived from Qutb’s Milestones, here translated as "Milestone on the Road," diverge. 15 February 1994 Political Islam Review: 'AQIDATI 1 Feb As published in: Daily Report. Near East & South Asia, FBIS-NES-94-031 on 15 February 1994 Under the heading(s): Islamic Affairs, INTERNATIONAL AFFAIRS [Page 6]. 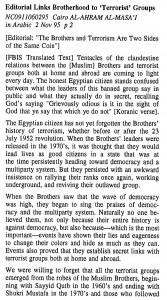 Finally here is an even more recent article from our Readex FBIS coverage on the legacy of Sayyid Qutb, the tentacles of clandestine relations between the Muslim Brotherhood, and terrorist groups. Cairo AL-AHRAM AL-MASA'I - 02 November 1995 Editorial Links Brotherhood to 'Terrorist' Groups   As published in: Daily Report Near East & South Asia, FBIS-NES-95-217 on 09 November 1995 Under the heading(s): Egypt [Page 14].