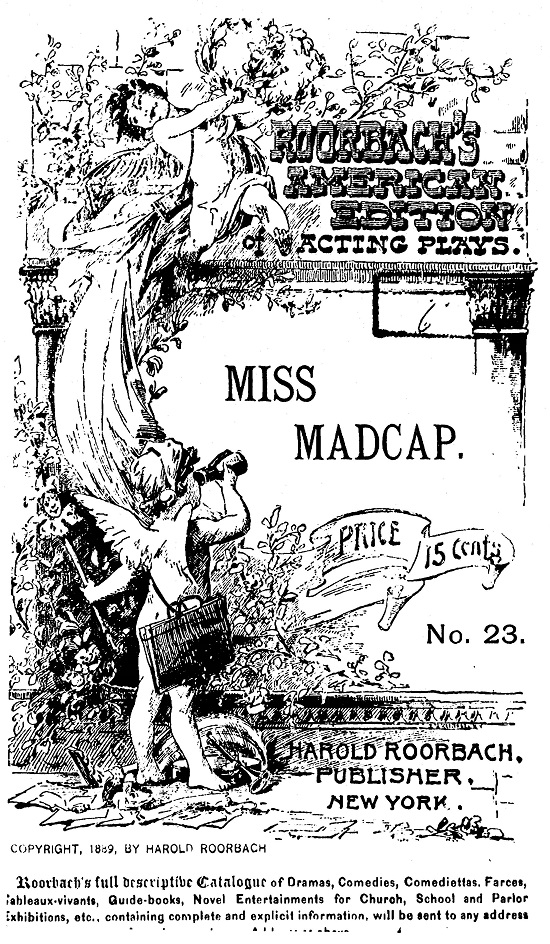 Both young people are adamantly opposed to marrying the other, and each resolves, unaware of the other’s similar scheme, to be so disagreeable that no one would sue for matrimony. Clara rejects her friend Philip’s plan to physically assault Augustus; instead she determines to “pretend to be a ‘tomboy’ and scare the poor fellow into refusing me.” They agree that Philip will “pretend to be a New York ‘tough’—a rowdy you know, and all that.” As soon as they are agreed, Augustus is heard offstage:

Phil enters and roughs Augustus up a bit. Clara continues to be brash and coarse. Finally, Augustus cannot take it any longer and swears he will never marry Clara. Their deceptions are discovered, and they congratulate each other on their role playing. They agree not to marry, but Clara, the spurned, offers to divide the estate equally. 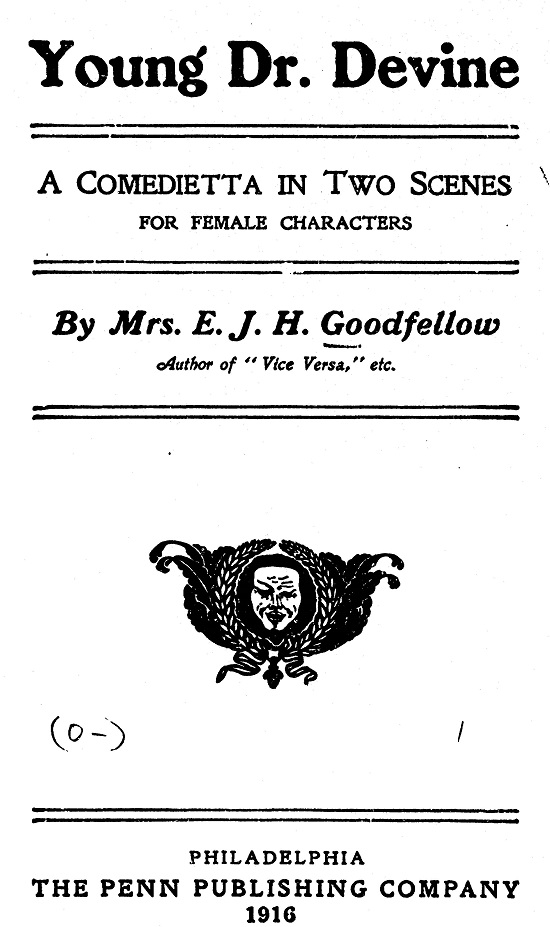 The action takes place in a classroom at Hillside Seminary on a Saturday morning. The girls are suffering from serious ennui. They engage in somewhat listless banter. Rebecca is called to the principal’s office and returns with “news—charming news.” There is an outbreak of smallpox in the village, and a “young and unmarried” doctor is coming to vaccinate all of them.

They giddily plan for this exciting diversion. Intending to capture the doctor into spending the afternoon at Hillside, they dress in their fanciest costumes and speculate as to which of their various talents will best please their visitor. When the principal conducts Dr. Devine, a “female physician,” into the classroom, the stage directions say it all:

(The girls assume attitudes expressive of astonishment; Elizabeth, who had been advancing toward the door, suddenly pauses with a fixed stare and hands clasped at back of neck. Grace sinks into a seat, covering her face with her hands, compulsively laughing, letting her flowers fall to the floor. Marie starts up, places her right hand on her heart, in her left hand holding her musical instrument suspended in mid-air. Rebecca clasps her hands over her forehead and looks bewildered. Rose, with astonishment ejaculates “I want—.” Maude and Laura turn their backs to Madam and the doctor and laugh to themselves. Madam gazes around the room in amazement, and finally gasps out, “What is the meaning of this scene?”)

Dr. Devine dispenses with the girls in short order as she renders dreadful diagnoses.

Dr. Devine (advances toward Elizabeth and exclaims): Why, Madam, I thought you assured me that the young ladies were in good health; some disorder I find has preceded me. This young lady has decided symptoms of Cerebro-Spinal Meningitis, and should be sent to the nursery at once. Never mind, my dear, it may not be so bad as it appears after I thoroughly diagnose your case. (Approaches Marie.) This maiden, I am afraid, has an attack of Angina Pectoris, and I would recommend that she be kept in absolute quiet. I will give her a dose of Bryonia. (Marie sinks into her chair. Doctor approaches Grace who still continues to shake.) In your case, my dear, I fear Hepatitis, your chill is so severe—but we will take it in time. (Doctor looks at Rose, whose mouth is wide open since ejaculating “I want—.”) Your case is simply temporary Aphonia and I trust will yield to hydropathic treatment. (Doctor turns to Rebecca.) Ah, Miss, I see you have Cephalalgia; this is merely symptomatic of overwrought nerves and will probably disappear after taking a pint of very hot water and a sleep of several hours.

The doctor and principal exit, and the girls regain their good humor as they rapidly recover from their dreadful diagnoses.

There’s No Smoke Without Fire: A Comedietta in One Act (1873) 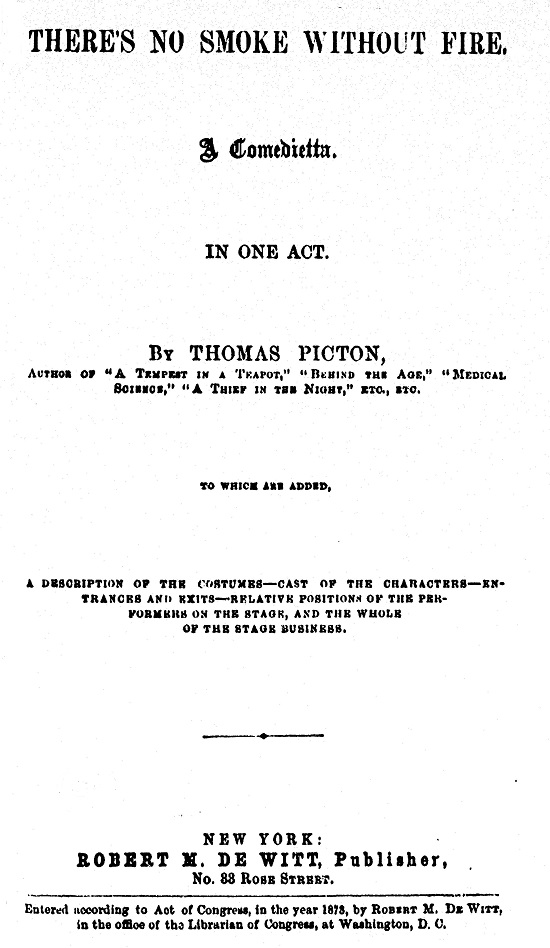 A young married couple are set at odds by a secret and the deception necessary to hide that secret. Timothy returns from work to an empty tenement and looks for Marie, his wife. She is not there, and he is certain he has seen her in the street. She rushes in, and he tasks her with her behavior. She compounds her dilemma by lying about shopping for sewing needles.

Tim. Permit me to look at the needles you purchased.

Tim. Is your number difficult to be found? What is it?

Marie (abstractedly). Three and a half.

Tim. That’s the number of her shoes.

Timothy prohibits Marie to go out unattended. He suggests she needs a servant which she abjures. He discusses household economy and the need not to waste money on “small vices” such as wine or tobacco. They reconcile, at least superficially, and speculate on starting a family.

Finally, the truth emerges. Despite Timothy’s vigorous denunciation of tobacco, Marie has been smoking on the sly. She laments:

No secrets from one another! If my poor husband only knew I had one—a big one at that. If, when he saw me on the avenue, he had only followed me and noted the store I entered. (interrupting herself) Ouf! I shiver from head to foot! I’m chilled all over! How terrible it is when a person has a passion that she can’t withstand, and which preys upon her heart! Oh! heavens! How different it is in the case of men, who deprive themselves of nothing in the way of amusement, from that of us poor women, denied the least extra luxury, and forced to be content with an absolute necessity.”

Timothy smells cigar smoke in their bedroom and concludes that Marie is entertaining a paramour who smokes. He becomes frantic. He confronts Marie who finally confesses that it is she who has been smoking. She promises to leave off, but Timothy has a counterproposal.

Tim. Not at all, let us smoke together, I’ll try to learn.

In a time when smoking is generally prohibited on stage, it is bemusing to consider a time in which it would not be remarked except when, as in this case, smoking is the whole point.