'In the Shadow of Conventions:' Gender Equality in Islamic Society 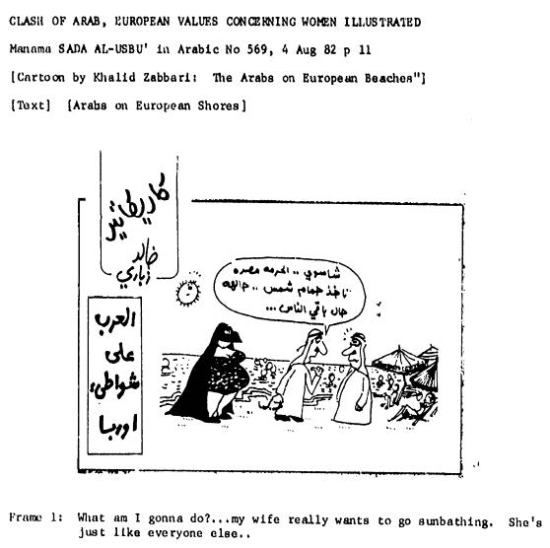 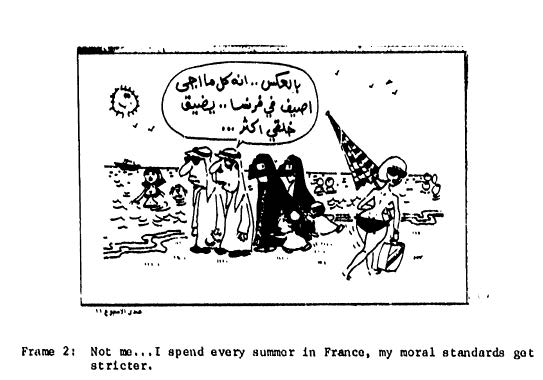 The scope of Joint Publications Research Service (JPRS) Reports, 1957-1995, is much broader than politics and national security; social issues are also well represented. In the four reports excerpted below we proceed from general to particular. The first, which includes the cartoons here, is a diverse collection of articles from Arabic-language sources; the second a travel diary of a woman visiting oases in Egypt. The third and fourth items both concern the conflict of Muslim traditions in the former Soviet Union—the latter report specifically with regard to the nomadic culture of Kazakhstan. Together they offer valuable insights into the role of women in Muslim countries, both in urban and rural settings. 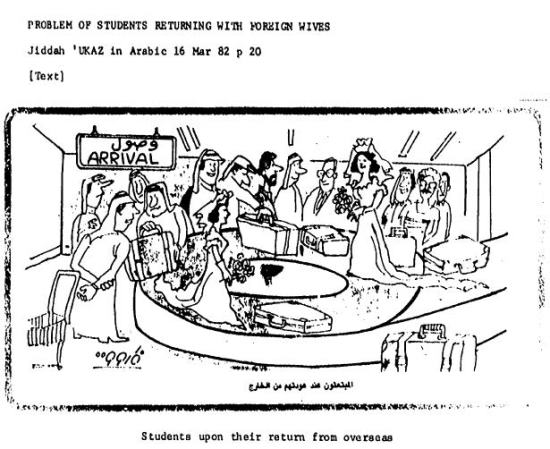 One article from Bahrain states:

As [an indirect] result of the educational standard achieved by Gulf women after they fortified themselves with education and entered the field of employment, a set of social changes emerged. These changes affected women's lives indirectly. In most Gulf states women achieved a sort of independence: they can travel alone; they can ride buses and taxicabs; they can drive cars; and they can work for themselves. (p. 4)

Another article, from Kuwait, tells of:

...the scarcity of realistic research and studies and even statistical data about conditions of Gulf women... (p. 7)

Both developing and established nations are represented. In the United Arab Emirates we encounter a woman more than 70-years old driving a school bus in the morning and working as a driving instructor in the afternoon. 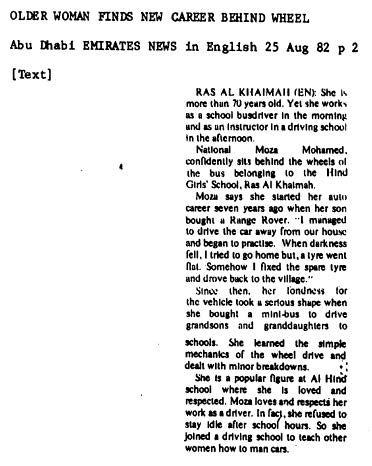 And she is not alone in her ambition:

In Bahrain, a wealthy nation and a center for banking and finance throughout the region, one editorial writer laments that nation's excesses in these words:

...hard work, which was the lot of our grandmothers in life—they were satisfied with it, and they were content to accept it—it was the secret of their happiness. (p. 28)

The question of employment looms large in these articles. “The principal duty of a woman is her home: a woman has to serve her husband and her children,” says one cleric. In defense of more expansive civil rights, another cleric cites Roman law instead of the Koran:

Reasonable people do not dispute the fact that Islam took women out of the bottomless pit they were in in the days that preceded Islam when women were despised and disdained: women did not inherit; they suffered injustice and tyranny; and they were forced to marry against their wishes. This was women's lot with pre-Islamic Arabs; other nations, however, doubted the humanity of women and wondered whether they deserved rewards for their good deeds. Finally the Ecclesiastical Synod in Rome determined that women were soulless, irredeemable impure animals. Under Roman law a husband had the right to sell his wife and to take over any property she may have. Then the Islamic message dawned upon the Earth, repudiating everything that was prevalent about women. In Islam women have the right to live their lives and to be protected just as men are. (p. 40)

The above, written almost 35 years ago, appears much more progressive than what Islamic state militants are proposing for their “caliphate.”

The matter of dress is perhaps the most visible sign of women’s social status in Persian Gulf countries. In one pair of articles from famously conservative Saudi Arabia, it’s not surprising to find even women correspondents coming down in favor of veiling. It’s interesting, however, to note how the discussion of “personal adornment” quickly segues into more general cultural proscriptions against ostentatious display which themselves conflict with the very old tradition of the wedding banquet said to have come from the Prophet himself. There is much more nuance here than often appears in Western press accounts.

Our second report, Translations on Near East, No. 489, Al-Kharjah Oases, A Social, Historical, and Economic Study, by Amina Mustafa al-Sawi (JPRS-50911, 07/09/1970, 61 pages), is a first-person narrative of a woman social scientist traveling in Egypt’s desert places. Her description of her milieu at times verges on the poetic:

The terrible, sandy, arid desert stretches before me to infinity, and the hills rise here and there. But there is nothing else. The hills are composed of rocks of different colors. The dark red is bordered by a silver color, the green runs parallel to the yellow and the violet is inlaid with enchanting rose colors, and all are gleaming under the rays of the sun. (p. 3)

Her destination is far removed—400 kilometers—from the urban cultural context of Cairo. She speculates on that physical and conceptual distance in the Preface:

What do the inhabitants of the valley know about their brothers in the Southern desert, those citizens who live in complete isolation from civilization, fighting violent nature represented by sand and shifting dunes, dry water wells, heat which reaches 49 degrees in the summer, and cold reaching 2 degrees below zero in the winter.

These citizens live in the shadow of conventions, their society dominated by customs and traditions which are completely different from what we know in the valley.

Those who wrote about the social life in the oases of the Southern desert had failed to record the complete facts and to convey a true picture. They did not go to the oases for research and study; they were there merely as officials or transient visitors. They were all men, and naturally they were in contact with men only. They did not know anything about the woman there, the woman who is half of society. They are forgiven, for they were deterred by the strict confines which traditions impose on the woman of the oases.

Al-Sawi describes a wedding ceremony in detail, inspects irrigation works, and braves “huge armies of deadly scorpions” to visit two temples near the town of Dush. She and her driver come upon three unconscious men in a truck filled with desert plants that were harvested for a German pharmaceutical firm; the men had been overcome by the fumes emanating from the plants. And she investigates witchcraft:

One of these magicians said to me: “Anyone who wants to practice magic must imprison himself in a dark room for 40 days during which he is in complete isolation and does not see the sun or any other light. He recites special incantations which will bring him closer to the spirits. In the morning of the forty-first day, he moves to a grave with the body of a man who had died recently and sleeps there for 3 nights. He then returns to his dark room and goes to sleep. The invisible spirits appear in his dreams and he chooses from among them a male or a female servant. He then practices his witchcraft through this servant.” (p. 35)

Although she herself as an academic lives considerably outside the boundaries of desert society, she is charitable towards those for whom it constitutes their entire world. She describes how the isolation and harshness of their setting have reinforced strict ways of life, and appreciates the relative purity of that existence as compared with that of city dwellers who have more options and greater resources for information and sustenance.

In our third and fourth selections, we find that the Soviets had much less patience and tolerance for what they considered primitive social and political practices that were inimical to the communist project.

The Carry-Overs of Islam in the Attitude towards Women and the Ways of Overcoming them, by M.V. Vagabov [JPRS 36539, 1966, 17 pages] is all about communist orthodoxy which is set in opposition both to Islam and to pre-Islamic native customs. The author writes,

The supporters of the gloomy past try to preserve and cultivate their wild rites as folk traditions and rites which have nothing in common with the reactionary essence of Islam. (p. 5)

He comes down firmly against arranged/youth marriage, polygamy, the seclusion of women, ritual coverings, and dowry as feudal, patriarchal holdovers that are worse than useless in communist society.

Our final report, On Feudal-Bey Survivals and their Overcoming, by D. Kshibekov [JPRS-NY-865, 26 October 1957, 72 pages], is an extensive and scholarly Soviet rebuttal of Islamism focused specifically on Kazakhstan.

The Soviet Union was a vast empire encompassing relatively urban, European populations, and Asiatic, nomadic tribes for whom even furniture was an impediment to survival, much less matters of gender equality. The author writes,

It is known from statistical data that immediately after the socialist revolution in Kazakhstan, 75.5 percent of the native population led a nomadic existence. In 1928, there were 567,000 nomad families in the republic. This way of life put a stamp on the economy and culture of the Kazakhs. Nomadic life made it impossible to build permanent homes or to make use of tables, chairs and other articles of daily and household use. (p. 60)

Women were valued in equivalence with cattle and could be abducted into marriage, or killed for impugning the honor of the family. Marriage as an institution was less about the individuals involved and more about tribal relationships. The author casts the role of women in tribal society as yet another atavistic property/class relationship drastically in need of revision. He goes so far into the domestic space as to descry a cultural holdover that may sound familiar to Western ears:

Among a certain element of Kazakhs there exists to this day the evil, stupid conviction that only women should be engaged in household work. (p. 39)

Another opinion with contemporary resonance comes from none other than Karl Marx himself:

In inciting the adherents of Islam against people of other faiths, it sows religious fanaticism. In this connection K. Marx wrote: “The Koran and the Moslem law founded upon it reduce the geography and ethnography of the peoples of the entire world to a simple and convenient formula of division into two halves: true believers and unbelievers. An unbeliever is a “gyaur,” an enemy. Islam curses the nation of unbelievers and creates a state of perpetual hostility between Moslems and unbelievers.” (pp. 46-7)

Although all of the reports included here view Islamic social conventions as regressive compared with urban, Western sensibilities, this one is the most reasoned through the author's consideration of why the traditional Islamic approach to life made sense in its historical context. The quarrel comes through taking the broader view of those traditions relative to a national or international/communist framework. And from that point of view, after citing both Marx and the Koran, the author appeals to a poet:

The poet Askar Tokmagambetov in his fable, “The apple tree and the bind-weed,” writes:

Give the old survivals free play

You will become their prisoner;

Especially in the West, it's enlightening to explore Arab social norms in their own context, on their own terms. These reports provide a ready means whereby we can discover the meaning beneath the charged rhetoric common in today's political climate.

For more information about Joint Publications Research Service (JPRS) Reports, 1957-1994,or to request a trial for your institution, please contact readexmarketing@readex.com.