If Jane Cunningham Croly, the influential 19th-century journalist, were to speak at a public event today, possibly at a place similar to The Ebell Club—as was described in a recent New York Times article—and were she to reflect on the virtues that drove her writing, she would tell us that it is important for a writer to be both unique and practical. As one of the first syndicated fashion writers in the United States, “Jennie June”—as Croly was known to her readers—blasted the bizarre styles of Paris and instead focused on American designs that were feasible for women. She described long skirts that swept the streets as “difficult.” Hoop skirts? Preposterous. That said, Croly savored the options women had in designs and fabrics, and wrote extensively about the beautiful styles of the day. She specified what men wanted:

Croly also knew what men did not want. In 1868 the New York Press Club held a banquet to honor Charles Dickens, and Croly—a working reporter—asked to attend. She was informed it was a men's-only event. No women allowed. Croly responded by forming her own club, which she named Sorosis, and invited Dickens to speak at a breakfast affair. He declined. Nonetheless, Sorosis became a major forum “to promote agreeable and useful relations among women of literary and artistic tastes.” It was a place for women to discuss prevailing theories and issues of the day, and to consider their impact on future generations of women. It was also a great place to show off a new dress and to eat an extra-large lunch. Croly’s women’s club idea took off across the country to the extent that she later established the General Federation of Women’s Clubs and the New York Women's Press Club. 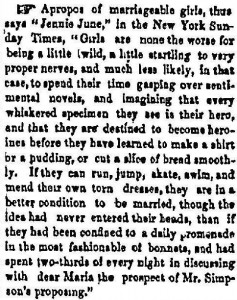 The accomplishments of Jane Cunningham Croly were vast. A happily married mother of five, she spent 40 years working as a revered author, editor and journalist. More notably, she was instrumental in establishing a platform for the voices of 19th-century American women. Although Croly spent much of her adult life writing and advocating for women’s advancement outside of the house, she felt strongly that a woman’s place was in the home. In “Jennie June’s American Cookery Book,” Croly tells young homemakers: “Bad cooking is a crime….A woman convicted of it should be arraigned for manslaughter.” She expected women to roll up their sleeves in the kitchen. One of her meat recipes begins: “Take the lower half of a pig’s face…”
Jane Cunningham Croly believed that the noblest job for a woman was to serve her family. And, what exactly did Croly suggest was a woman’s best preparation to become a happy and successful homemaker? Such a woman comes from a girl who has been allowed to run “wild” and is also expected to mend her own dress. Success will naturally transpire for a “marriageable girl” who has spent her time becoming fluent in her day-to-day skills, rather than one who has wasted her time dreaming about her knight in shining armor.
Tags
Filed under