Ships Ahoy! They don't make ships like this anymore

Ships Ahoy! They don't make ships like this anymore

Contrary to this newspaper report that the event would take place in November 1797, the frigate USS Constitution was actually christened and launched at Boston’s naval shipyards the previous month on October 21—213 years ago this fall. During the course of the next two weeks in 1797, a number of newspapers wrote or republished articles about the launching, including the Norwich Packet: 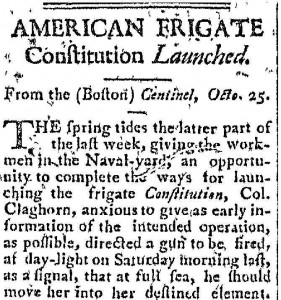 The Constitution was one of six frigates (four 44-gun vessels and two 36-gun vessels) authorized for construction by the passage on March 27, 1794 of the Naval Act of 1794.  Naval Document No. 2, published in the American State Papers, was communicated to the House of Representatives on December 29, 1794.  The Constitution was to be built in Boston as one of the four larger vessels. As noted in the document:

“The frigates will be built of live oak and red cedar, in all parts where they can be used to advantage. These valuable woods afford the United States the highest advantages in building ships, the durability being estimated at five times that of the common white oak.” 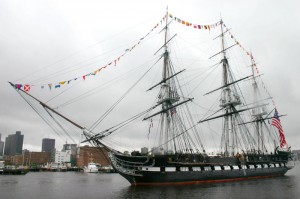 During a War of 1812 battle against the HMS Guerriere, it was this strong wood that lent the Constitution her nickname “Old Ironsides,” (but more on her famous moniker in a later posting).

Available today for all to see and board at Pier 1 at the former Charlestown Navy Yard in Boston, the USS Constitution is the oldest floating commissioned naval vessel in the world.  A four-line filler in the October 27, 1797 issue of the Commercial Advertiser was prophetic:

“…The Constitution moves slow, but we trust she will last long.”

Little did the writer know that “Old Ironsides” would still be a commissioned ship in the U.S. Navy in 2010!